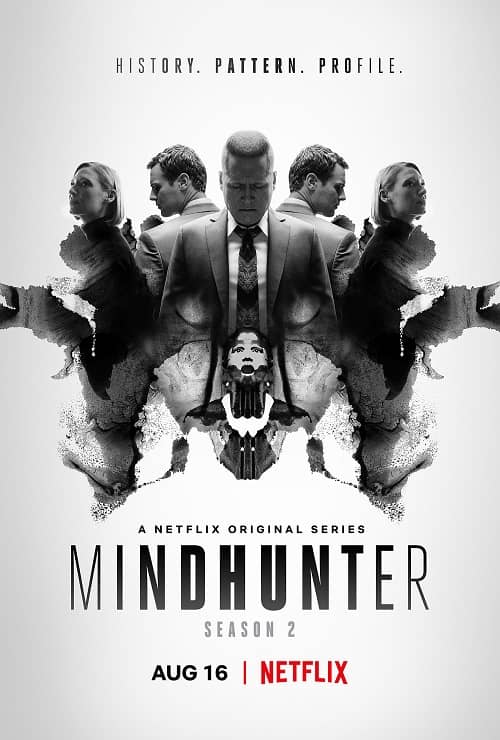 All genres have their tropes that get returned to again and again. Historians write about the Civil War and World War II and the Civil War; singers write about breakups. For crime shows, serial killers represent the genre’s bottomless well. Netflix’s Mindhunter seeks to explore that vein as deeply as possible, and in the process creates television’s quietest noir.

FBI Special Agents Bill Tench (Holt McCallany) and Holden Ford (Jonathan Groff) are the founders of the FBI’s Behavioral Science Unit, which gave birth to the idea of “profiling” serial killers. Tench and Ford crisscross the country, interviewing serial killers with the intent of developing tools that will allow for the developing of psychological fingerprints of these compulsive killers, as an aid to capturing them. Fascinating and thoughtful, the series is significantly quieter than other cop shows. Mindhunter jettisons the foot chases and gunfights, and focuses on the agents interviewing serial killers

Mindhunter is based on the book of the same name by John Douglas and Mark Olshaker. Again, lesser cop shows pay lip service to the idea of “getting into the sick bastard’s head,” usually followed by some leap of logic that leads to the cops catching the killer. In Mindhunter, the interviews are the big centerpieces of most episodes. They’re great exercises in text and subtext, with the agents asking about thoughts and processes of the killers. The challenge of the show, and the reward for the patient viewer, is the agents discussing the interviews afterwards. They debate if the answers given were sincere, if the killer was being truthful, or misinterpreting things, or just outright lying. While fascinating, the interviews carry their own frustrating ambiguity.

[Click the images for FBI-sized versions.]
As compelling as the interview scenes are, the series really picks up when Agents Tench and Ford work on actual cases, which can be maddeningly rare, especially in the first season. Season 2 takes on more explicit casework, with the last half of the season focusing on a series of child murders in Atlanta from 1979-1981. The storytelling is a neat trick, having the protagonists struggle while an unknown antagonist works behind the scenes. Agent Tench’s careful, practical approach spars with Agent Ford’s leaps in logic and refusal to weigh local political considerations. Season two also captures the monotony of police work. One memorable episode features a montage of the agents and cops, cranky at their own lack of sleep and long hours, aggressively waking up those who fall asleep on stakeouts. 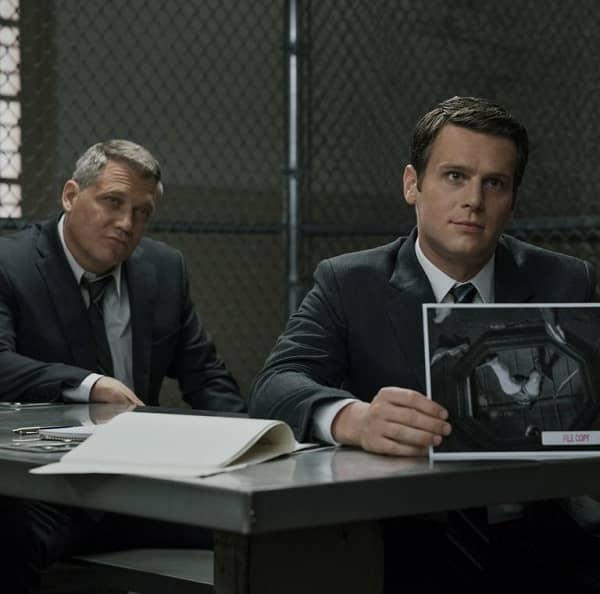 For those who are turned off by gore, Mindhunter is actually a great fit. The least bloody cop show currently airing, the agents are brought in after initial discovery of a crime or series of crimes. Crime scenes and acts are described verbally, and occasionally the main characters are seen flipping through large glossy photos (see above). But even then, not much fake blood is spilled in this show; there’s nary a drop of arterial spray in most episodes. The most gruesome scenes in most episodes are the opening credits, where eerily beautiful piano melodies play over a pair of hands preparing an audio recorder for an interview, interspersed with quick flashes of decomposing bodies. Having said that, this is a show that deals with extreme violence, and the crimes described and ruminated over are mostly sexual in nature, and a significant number of them involve child victims. Viewers sensitive to such topics should avoid.

While the specter of violence is a constant presence on the show, it’s entirely off screen. Even True Detective, another noir series that leans heavily on long investigations with interviews and evidence reviews, is regularly punctuated with scenes of chases, extreme violence and dramatic gunfights. Mindhunter avoids all that, and by my count Agents Tench and Ford have fired their weapons exactly zero times across two seasons.

Possessing such dark and sexual subject matter, criminal investigations and a desire to empathize with serial killers, the show has many hallmarks of a classic noir, but lacks the nihilism. Mindhunter’s three main characters (the agents are rounded out by Anna Torv playing Dr. Wendy Carr, a psychology professor who’s helping to categorize and systemize their interview process) are all essentially good people. They believe their work can help prevent murders and catch serial offenders. There’s none of the radical self-interest and base instincts that drive the parties in True Detective.

The unsettling part of Mindhunter (well, one unsettling part… this is a show that centers on serial killers), is watching the close contact to sexual violence corrode good characters, infecting them and destroying personal relationships. Noir is frequently classified by its setting and character types. While stripping away most of those trappings, the most noir thing about Mindhunter is its demonstration of the Nietzschean truth that “if thou gazes long into an abyss, the abyss will gaze back into thee.”

Mindhunter Seasons 1 and 2 are currently available on Netflix. David Fincher, the award-winning director of Fight Club and others, is a producer and sometimes-director of the series. He hopes to have a total of five seasons of the show. Many episodes have small vignettes of a mysteries ADT serviceman, who appears to be developing the predilections of a serial killer. There’s little payoff to the vignettes in Seasons 1 and 2, so one hopes the character develops, and ultimately is confronted by Tench and Ford. The promise of a long-simmering series of murders being brought to the attention of Tench and Ford, an investigation and manhunt have high potential for a dramatic, season-long investigation. Season 1’s finale was a bit limp, but season 2’s intense investigation kicks into a more satisfying pace. If the improvements continue, season 5 would look like a masterpiece.

Mick Gall is a government bureaucrat by day, Military Intelligence officer in the Army Reserves by weekend, and writer of adventure fiction by (occasional) night. His last post for Black Gate was It’s Alive! Classic Horror and Sci-Fi Art from the Kirk Hammett Collection.

I enjoyed the first season of Mindhunter and I’m looking forward to watching season 2. I agree with your take on the show: Noir without the blood, with a quiet intensity to it.

Season two is also excellent. I hope the wait for the next season won’t be so long this time