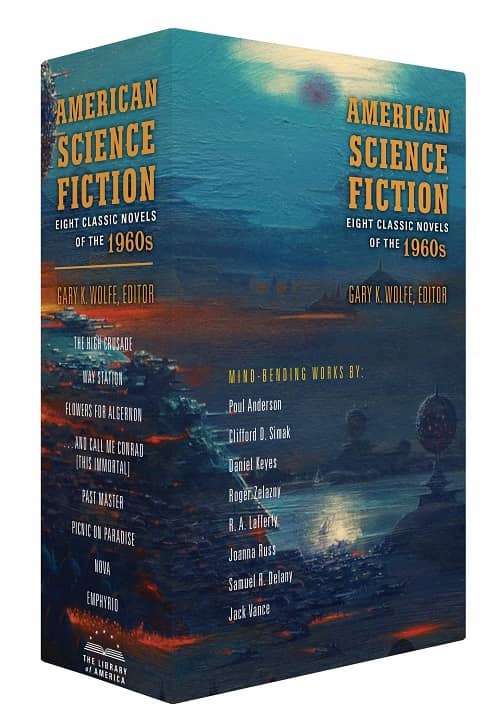 Gary K. Wolfe is one of my favorite Locus columnists. He also reviews science fiction for the Chicago Tribune and, with Jonathan Strahan, co-hosts the excellent Coode Street Podcast. But more and more these days I think of him as an editor. He edited the Philip Jose Farmer retrospective collection Up the Bright River (2011) and, even more significantly, American Science Fiction: Nine Classic Novels of the 1950s: A Library of America Boxed Set (2012), a massive 1,700-page, 2-volume omnibus collection of classic novels by Pohl & Kornbluth, Sturgeon, Brackett, Matheson, Heinlein, Bester, Blish, Budrys, and Leiber, all in gorgeous hardcover with acid-free paper, sewn binding, and full cloth covers.

So I was thrilled to hear that, seven long years later, Wolfe has fulfilled that promise of that first beautiful boxed set with a sequel: American Science Fiction: Eight Classic Novels of the 1960s. Like the first, it will be sold as two separate hardcovers, and also available in a handsome boxed set edition. It contains eight of the finest SF novels of the 60s:

The whole package comes wrapped up in a boxed set featuring artwork from the brilliant Paul Lehr. It will be in bookstores on November 5th — and is available now at $15 below retail if you order direct from Library of America.

Volumes 1 and 2. Covers by Paul Lehr

Here’s part of the description from the Library of America website.

In the first volume, editor Gary K. Wolfe gathers four trailblazing novels that reveal the full range of the decade’s creative intensities. In The High Crusade (1960), Poul Anderson celebrates the space operas of the pulp era, but with a madcap twist: when technologically advanced aliens touch down among the seeming primitives of medieval England, they find they have met their match. Clifford D. Simak’s Hugo Award–winning Way Station (1963) follows the progress of an unassuming Civil War veteran whose rural Wisconsin homestead has, unbeknownst to his neighbors, become an unlikely nexus of intergalactic battle.

Daniel Keyes’s much-loved best seller Flowers for Algernon (1966) imagines a near-future in which intelligence can be enhanced artificially—but Keyes downplays the speculative and technical possibilities of his premise in favor of intimate character study, taking the SF novel in daring new directions. In the postapocalyptic thriller This Immortal (1966)—published here under the author’s preferred title . . . And Call Me Conrad — Roger Zelazny weaves a skein of ancient myth and legend into his tale of mutant humans and blue aliens with the allusive daring and stylistic virtuosity that exemplify the New Wave at its best.

The second volume showcases four of the best novels from the final years of the decade. In R. A. Lafferty’s utterly idiosyncratic and uncategorizable Past Master (1968), Renaissance philosopher Thomas More is summoned to Golden Astrobe in the year 2535: Can he save the planet’s troubled utopia from its soulless technological perfection and ensure the survival of the faith? Joanna Russ introduces one of SF’s first and most engaging female adventurers in her taut and edgy debut novel Picnic on Paradise (1968): the tough, sardonic, unforgettable Alyx, an ancient Phoenician mercenary teleported into the future to serve as guide and bodyguard for a band of stranded space tourists.

The first African American writer to make a name for himself in the genre, Samuel R. Delany was hailed as “the best science-fiction writer in the world” on the basis of Nova (1968), a white-hot, fast-paced, protocyberpunk interstellar adventure featuring a misfit crew on a high-stakes quest. Stumbling on a mysterious ancient text among his father’s belongings, the son of a master woodcarver uncovers the key to revolutionary change in Jack Vance’s Emphyrio (1969), a marvel of craftsmanship and visionary world-building set on remote, feudal, theocratic Halma.

I’m sure there will be plenty of debate over Wolfe’s choices, considering his other options included Starship Troopers, A Canticle for Leibowitz, The Man in the High Castle, Little Fuzzy, Witch World, Davy, The Moon is a Harsh Mistress, The Witches of Karres, The Goblin Reservation, Dune, Babel-17, The Einstein Intersection, Lord of Light, Do Androids Dream of Electric Sheep?, Rite of Passage, Stand on Zanzibar, The Left Hand of Darkness, and many, many others. But given the limitations of length (and rights), I think he did a very fine job. 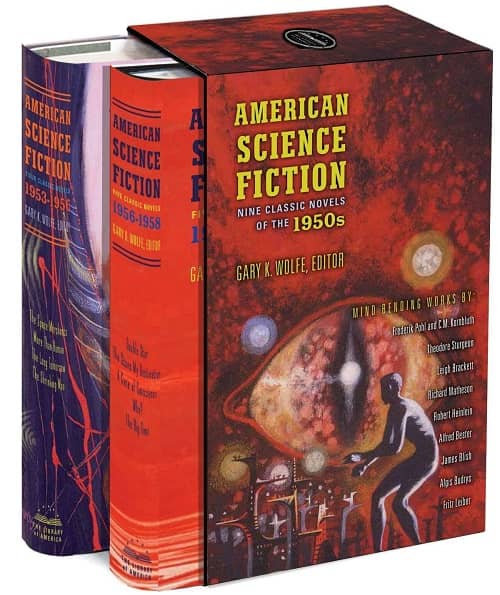 In his Locus Online review, Russell Letson notes that this set is a direct sequel to the earlier one.

American Science Fiction: Eight Classic Novels of the 1960s, is a chronological sequel to American Science Fiction: Nine Classic Novels of the 1950s (2012). Like its predecessor, the 1960s collection is edited by Gary K. Wolfe and is designed to provide scholars, teachers, and libraries (to say nothing of plain old readers) with reliable, accessible, physically sturdy editions of representative works of SF from the target decade. These are not statistically representative items, I should point out, but examples of the kind of novels that show, as Wolfe’s introduction puts it, that science fiction could be “a sophisticated, culturally significant, and ultimately enduring genre…”

This project is not quite an exercise in canon formation, partly because the question of why these novels and not those is tied up in practical constraints on Wolfe’s choices – length of text, availability of rights, existing single-author LoA volumes (thus no Dick, Le Guin, or Vonnegut). Nevertheless, the eight titles selected do demonstrate an impressive curve through the decade and show the range and variety of tropes and treatments and literary movements at large in the field… The various publishing histories reflect how the environment had changed since the previous decade. The Anderson, Simak, Zelazny, and Vance were not written specifically for the magazines, but were serialized before being released by hardcover or paperback houses. The Delany might have followed a similar path had John W. Campbell not rejected the novel because he didn’t think the Analog readership could “relate to a black main character.” And now major publishers had dedicated SF lines – Doubleday’s aimed at libraries (and as a feeder for the Science Fiction Book Club) – while Ace, under Terry Carr, started the Science Fiction Specials as a prestige mass-market paperback line, and that is where the Lafferty and Russ first appeared. Flowers for Agernon [sic] has the most complicated history: it originated as a novella, was shortened and published as a short story in F&SF in 1959, and expanded and then revised several times for different publishers before it finally appeared as a hardcover novel in 1966.

Making the case for the literary virtues of SF of the 1960s is a bit easier than it is for the 1950s. This is, after all, the decade of the New Wave, of the debuts of Delany and Le Guin, of Dangerous Visions, of the entry of Vonnegut’s SF-inflected work into the literary mainstream… But these novels speak for themselves, even a half-century after they caught the attention of their original audiences..  I remember these novels, as well as many of those that couldn’t be included in the set, as part of exactly the artistic and commercial environment that Wolfe’s introduction outlines, even if at the time I was probably incapable of articulating that insight as precisely and confidently. The business of influence and importance is a tricky one – reputations come and go, and good books and good writers fall out of favor all the time. Projects such as the Library of America’s keep open windows onto the genre’s past and should provide cornerstones for serious collections, private or public.

Our previous articles on Gary K. Wolfe include:

The Library of America has published some terrific and enduring work by the greatest SF and mystery writers in American history, including Kurt Vonnegut, Dashiell Hammett, Philip K. Dick, Ross Macdonald, David Goodis, F. Scott Fitzgerald, and many others. We’ve covered several here, including:

Oh, you want boxed sets? They have those too.

See all our coverage of the best new books here.

I interviewed Wolfe about this awesome set for an upcoming article at Kirkus Reviews. He describes much of his selection process. Stay tuned!

Thanks for the head’s up. Will do, and looking forward to it!