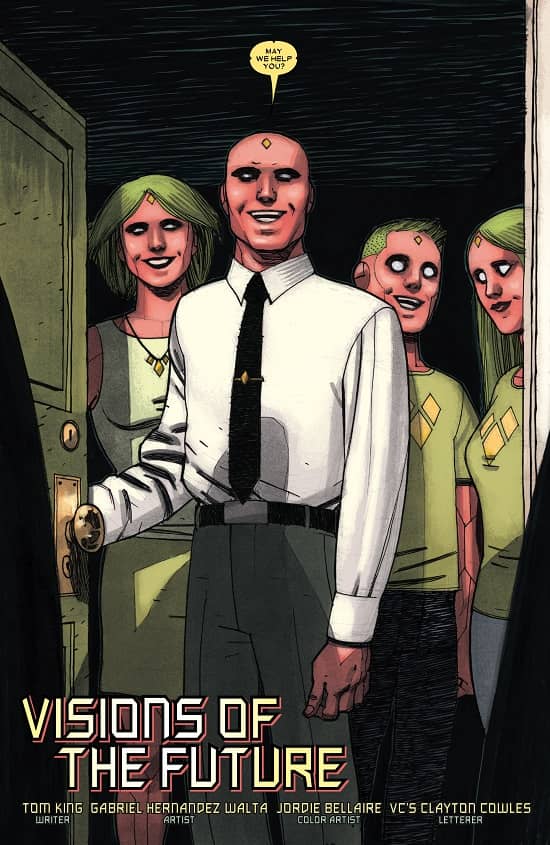 As much as I can, I’m trying to keep up with the best comics in the field. I don’t normally gravitate to the sad tragedy inherent in family drama, so I had started and stopped Marvel’s 2015 Vision series a few times. That’s a statement about me rather than the 12-issue masterpiece by Tom King, Gabriel Hernandez Walta, Jordie Bellaire and Clayton Knowles. The series is a brilliant science fiction tragedy. 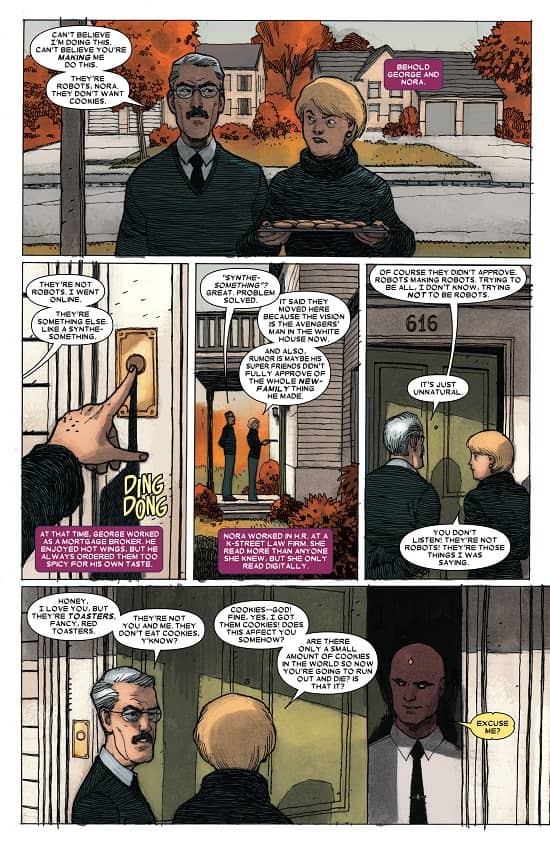 I’ve heard Tom King describe the creation process for Vision on various podcasts. Coming off some of his first DC work (Grayson), he was offered a chance to pitch science fiction ideas to Marvel for the Vision. He wanted to do  a space adventure, but his editor said they wanted something on Earth. Not really sure where to do scifi on Earth, he thought of Frankenstein, and that maybe the Vision would be so lonely that he would make a family. He realized that this idea was just messed up enough to work. And it does. 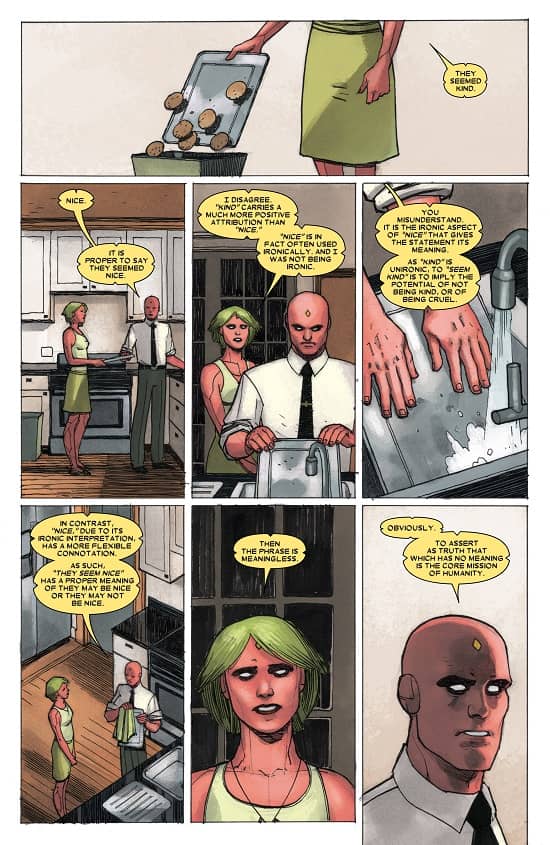 The Vision has built himself a wife and two children and set them all up in suburban, Normal Rockwell-esque Arlington, but obviously they don’t fit. But it’s not just that they physically don’t fit. The very idea the Vision has of trying to fit in is nonsensical to the point of delusion. 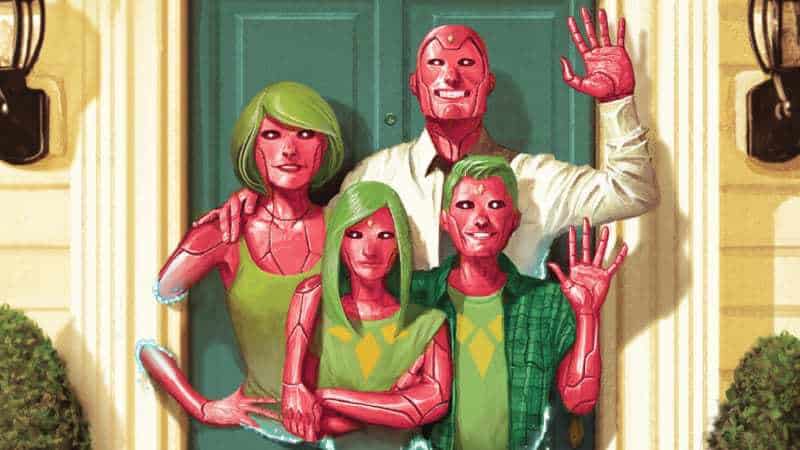 They do not need food, nor sleep, nor school, and yet his family tries to go through the motions, quixotically, because that’s what the Vision in his denial wants. 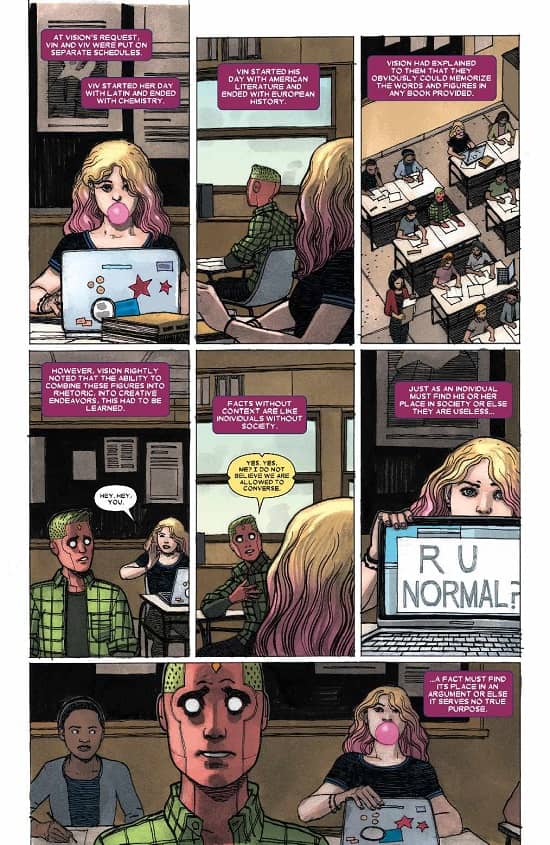 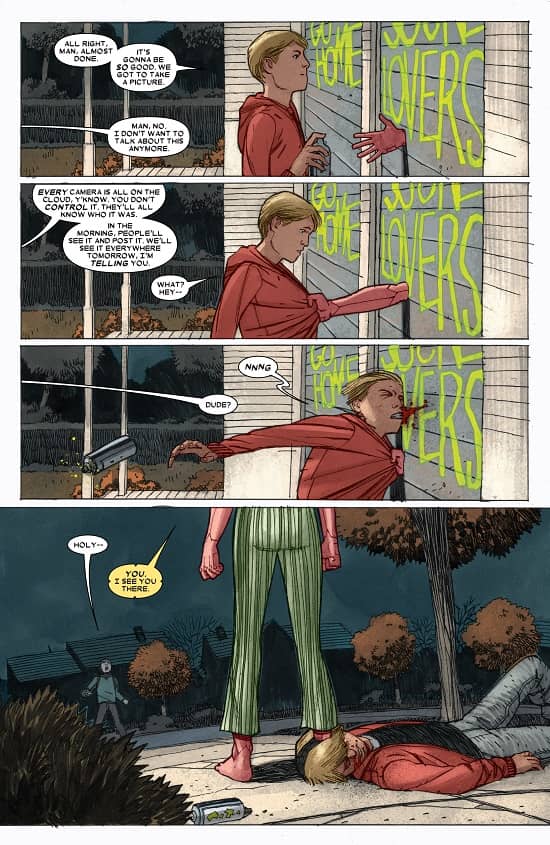 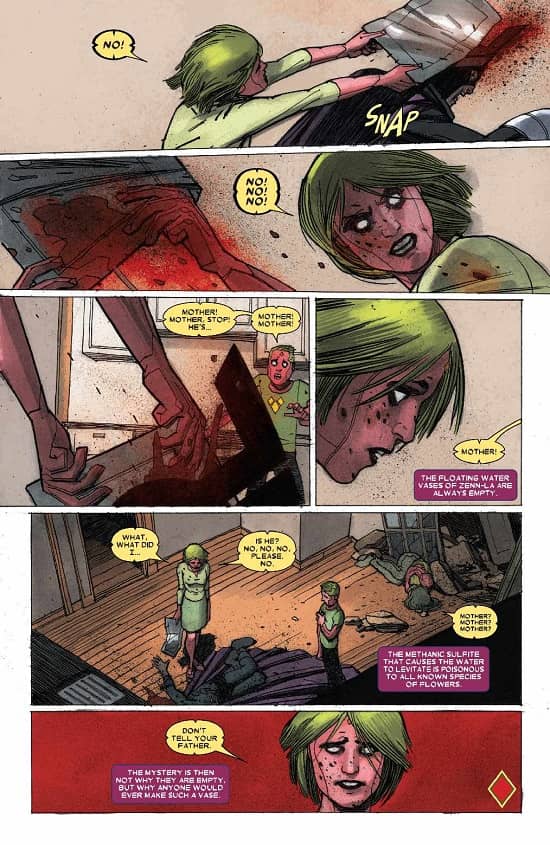 Wife and daughter and son try hard, learn to emulate his denial, refuse to accept their alienness, and are bewildered by their sadness, their lack of belonging, their absence of meaning. It’s beautiful and tragic. 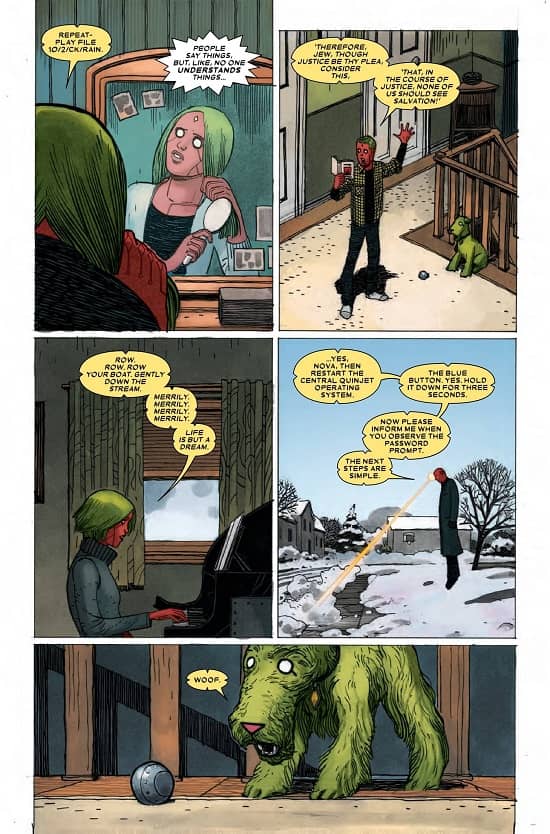 When the Grim Reaper, an old “relative” of the Vision’s, comes to kill them, Vision’s wife Virginia kills him and buries the body, not telling him what happened. This is where part of Vision‘s pitch comes from, where King describes it as “Marvel’s Breaking Bad.” Things only get worse, because this is not the only ghost to vision them. 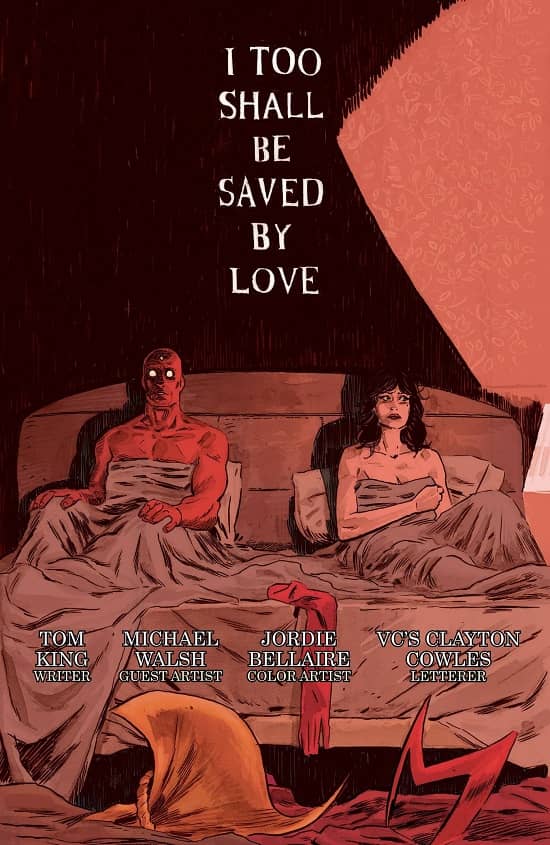 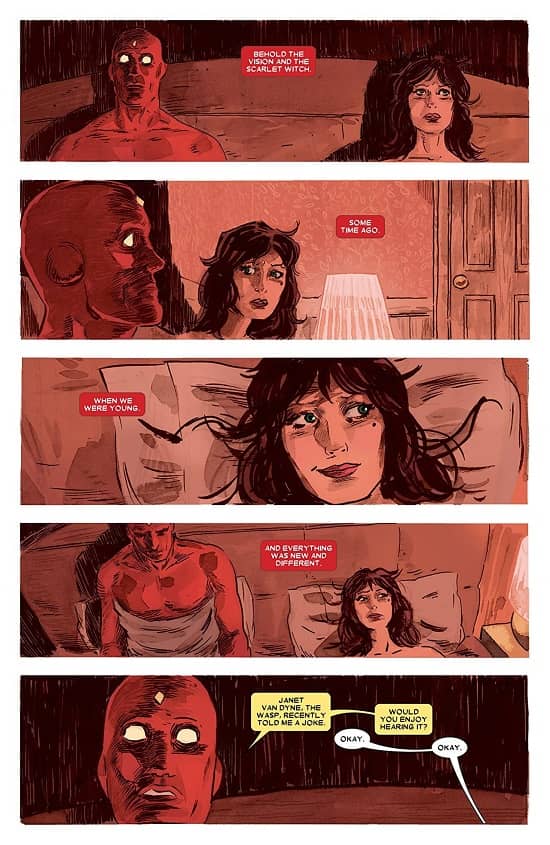 The Vision made Virginia with the brain patterns of his ex-wife Wanda (the Scarlet Witch), who is not known as the most stable and well-adjusted person in the Marvel Universe. The Vision, and his new marriage to Virginia, are haunted by all the things he did not learn from the failures of his previous relationship, and all the pieces are there to recapitulate that failure. 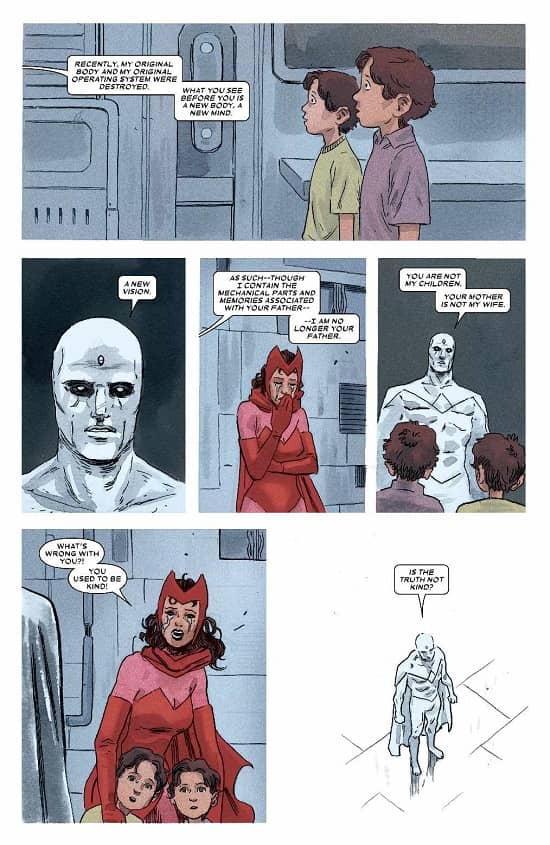 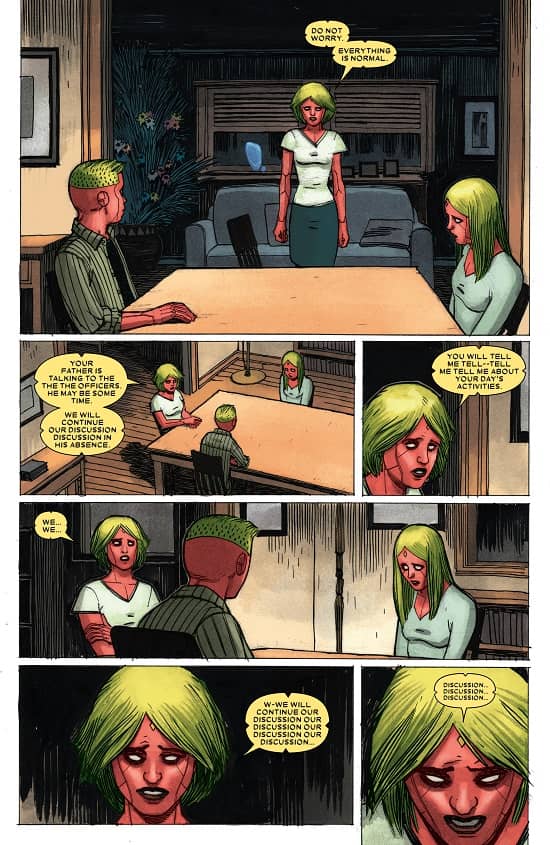 I read this Eisner-winning series on Marvel Unlimited, but am definitely going to buy the trade. The reading experience is rich and textured. With my own aspirations of one day writing comics, it’s also a master class in one way to create an extraordinary comic book.

Derek Künsken writes science fiction in Gatineau, Québec. His second novel, The Quantum Garden, hit bookstores everywhere on the 15th of October. It is the sequel to his debut novel The Quantum Magician which was nominated for the Aurora, Locus and Chinese Nebula Awards.