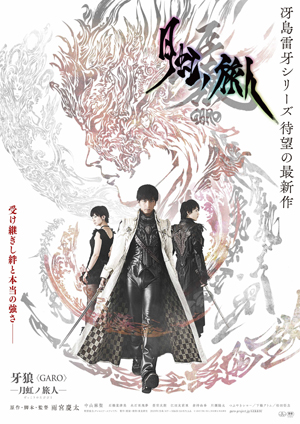 I approached my second and last film of July 30 with real uncertainty. I’d never seen many tokusatsu films or TV shows, and what I had seen I hadn’t cared for. (‘Tokusatsu’ literally means something like ‘special effects,’ but in the West it’s come especially to refer to shows like Power Rangers or Kamen Rider.) Still, playing in the De Sève Cinema was Garo — Under the Moonbow (Garo: gekkô no tabibito, 牙狼 — 月虹ノ旅人, also translated Garo: Moonbow Traveler), written and directed by Keita Amemiya. It’s the latest installment of a franchise, created by Amemiya, which began with a 2005 TV series and has continued through more TV shows, live-action movies, and anime series. as well as video games, manga, and various other tie-ins. A veteran creator of tokusatsu dramas, Amemiya is particularly known for his powerful design sense, and the images and description of the film promised a stylish fantasy adventure. Although it’d be my first experience with a series that had dozens of hours of continuity behind it, I decided it was worth passing up a chance to see The Crow on the big screen in order to watch Under the Moonbow.

The movie’s about Reiga Saezima (Masei Nakayama), one of an order of warriors, the Makai Knights, who protect humanity from monsters called Horrors. Superhumanly powerful, he becomes even stronger when wearing his suit of special golden armour — which is unfortunately corrupted by evil not long after the movie opens. Saezima has to purify it, but also must save his true love (Natsumi Ishibashi), who has been abducted by Horrors. Yet as he fights his way through a bizarre train, even more plots boil away, leading ultimately to a fantastic battle involving secrets of his lineage.

The first thing to say is that the film’s easily understood without any prior knowledge of the franchise. I suspect that the climax will have more weight for people familiar with the world and with certain characters who appear there, but everything’s set up well enough in the film itself. Exposition’s delivered cleanly, and does not overbalance the plot. The complexities of the world are dramatised well, and if in an absolute sense evil still remains to be fought, at least the main antagonist of this particular story is dealt with.

Beyond that, the plot’s nicely-worked. The tale keeps expanding as the film goes on, sprouting subplots. A range of characters get moments of their own in which to shine; everyone does something important in bringing matters to a happy ending. Rules of this fantasy are established, and followed logically in ways that bring out unexpected wrinkles. Importantly, new ideas and images are always emerging, 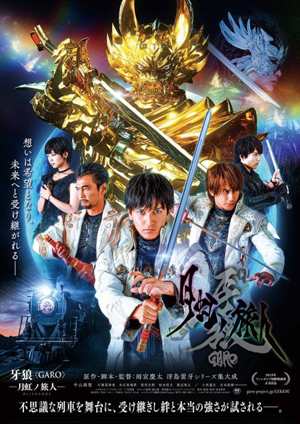 It is not flawless. The lighting in particular feels like a TV show, and not a particularly ambitious one (though in fairness this movie is a direct sequel to one TV series in particular, so it may simply be following a pre-existing look). The acting’s very flat, which fits with the characters — Moonbow has the surface quality of a pulp potboiler or a fairy tale, both of which the story vaguely recalls at different times. There is certainly a highly stylised presentation of character, to an extent in the writing but definitely in the performances; the way poses are struck, the way reactions are exaggerated. It’s clear, and not overdone to the point of self-parody, but is self-consciously theatrical if not broad.

One may note that this is not all bad. For many people, and I am one of them, a story that begins as a pulp action-adventure story and builds to become a fairy tale about knights battling in a castle in the sky is really quite a fine thing. Under the Moonbow is certainly a movie that understands what it is, and what it has to do. It doesn’t pretend to be anything else than what it is, or aspire for more. I can imagine some viewers finding it too simple; soundtrack music is obvious, emotional beats are hammered home, and there is no irony to the film at all.

What makes it work, in the end, are Amemiya’s designs. Armour, monsters, architecture — everything’s wonderful to look at, everything more detailed than everything else, everything conveying an air of magic that’s sometimes tinged with steampunk and sometimes tinged with the gothic and sometimes simply itself. It’s immersive due to the sheer density of the design. By that I mean both the level of detail in the individual costumes and props, and also the range and number of them. There are always new things appearing on the screen, and those things are always engaging to the eye.

This is important because the movie doesn’t try much in terms of filmic technique otherwise. It concentrates on telling a clear story, not in finding clever camera angles (except perhaps occasionally during the fight scenes). It is not a big-budget spectacular, and doesn’t really aim at that. It doesn’t try to build a realistic world with its CGI so much as try to build a consistent world, and it succeeds at that. This is a film where swordfights are frequent and quickly-paced, with explosions when sword meets sword.

There’s a definite YA feel to the movie, which I think would be best appreciated by tweens and younger teens. There’s not much blood that I noticed, and effectively no sexuality; some of the Horrors might be too intense for young children, but otherwise this is a family-friendly adventure story. I would say that there’s enough imagination in it to appeal to adults. Certainly I came to the film knowing nothing about the franchise it’s a part of, and not especially caring for the kind of thing it is, and yet came away from it highly entertained. I think the movie takes itself just seriously enough: it follows its story without worrying about trying to make things emotionally obvious to everyone at all times, and therefore succeeds in creating an immersive story that brings the audience on a journey through strange images and wild special effects to watch good defeating evil. Hard to ask for more.