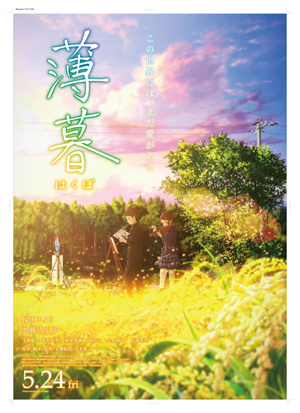 My third screening on July 29 was a double-feature at the De Sève Cinema of two animated movies, a long short and a short feature. “A Japanese Boy Who Draws” (ある日本の絵描き少年) is 20 minutes long. Twilight, which I immediately came to think of as (Not That) Twilight (and in fact some places online translate the title 薄暮, Hakubo, as Project Twilight), is 53 minutes long. They’re both slice-of-life films about young people in Japan making art, but are otherwise very different narratively and visually. Which is to say they have enough in common and enough contrast to make a fine double bill.

Written and directed by Masanao Kawajiri, “A Japanese Boy Who Draws” can actually be said to deal with two Japanese boys who draw: Shinji, an aspiring manga artist, and his friend Masaru, a mentally challenged boy who wears a luchador mask everywhere. They meet at the age of 10, and we follow Shinji as he narrates his career trying to break into manga. He breaks from Masaru, who does not grow up as Shinji does. But Shinji’s life doesn’t go as smoothly as he hoped. He gets into manga, he gets better at his craft, but nevertheless his career stalls out. He returns to his home town, and, as one might expect, reconnects with Masaru in a surprising way.

Put like that, the film sounds standard; it isn’t. It looks distinctive, to start with. Different art styles reflect Shinji’s different ages, different levels of drawing ability, and perhaps different relationships to art at different times. Childlike drawings give way to manga pages give way to greyscale live-action photography. The film’s particularly strong technically in the way it uses comics pages to tell its story; panels are a tricky thing to make work in motion pictures, but it comes off brilliantly here.

At the same time, this isn’t just a technical exercise. There’s some powerful emotional material in the movie. Shinji’s lack of progress in his career is powerful because it feels almost subversive: he works hard, he lives for his art, and he gets nowhere not just in business but as an artist. If there is a problem with the film, incidentally, it is that it may be difficult for an audience to assess how good an artist Shinji is or is not. I found myself surprised at the way other characters uniformly dismissed his work when the art on screen seemed perfectly fine. In any event, Shinji doesn’t have the creativity needed to make a great manga, it seems, which is fair enough. 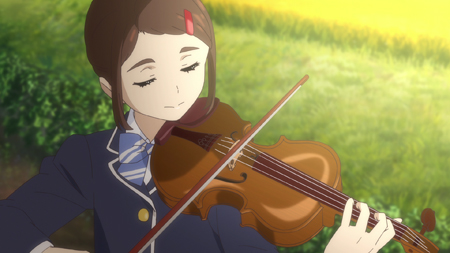 His friendship with Masaru balances his aspirations and struggles with art. There’s something sweet in their relationship as children, and Shinji’s turning away from Masaru seems to prefigure his difficulty with manga; as though he’s turning away from the source of his youthful creativity, perhaps emphasised by Masaru’s perpetually juvenile existence. The scenes at the end, leading up to a reunion of the two, are therefore the perfect conclusion to the film: not obvious, not predictable except in its most general outline, giving a satisfying wrap-up without a too-facile assertion that everything’s solved. “A Japanese Boy Who Draws” is sometimes hard to watch, but it’s a very strong movie that has some powerful thoughts on the nature of art and creation.

Twilight was written and directed by Yutaka Yamamoto, and in some ways it’s a more traditional anime. In other ways, though, it has a similarly meditative approach to art and the intense relationships of youth.

Sachi Koyama (the voice of Hiyori Sakurada, whose live-action credits include Tokyo Ghoul and Poison Berry In My Brain) is a girl at a school in rural Japan who plays the violin in a string quartet. She likes to be by herself, but still has a strong group of friends. Then at her usual bus stop she meets Yusuke (voiced by Seishiro Kato, who appeared in the live-action Assassination Classroom films), a boy who carries around a sketchbook and an air of mystery. She’s drawn to him, but what sort of secret does he keep? 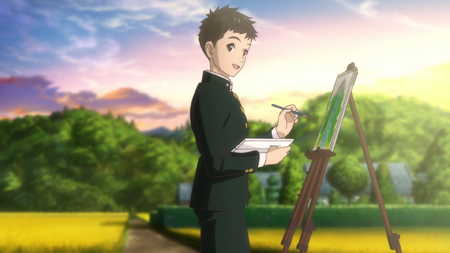 As it turns out, nothing too significant. Yusuke isn’t a brooding Byronic hero. Just a boy with his own past and a desire to paint. He has an eye for scenery but feels he’s missing something in his art, as Sachi’s feels she’s missing something in her music. The two of them draw close as they each turn out to be the other’s missing piece. Sachi’s voice-over narration helps bring out her slow growth over the course of the film, as their relationship develops.

That development is engagingly free of melodrama. This is a deeply realist anime, focussing on character, with a plot that deftly avoids cliche. It is in fact surprising how much mileage Yamamoto gets out of a story in which nothing especially dramatic happens; he focuses in on Sachi so carefully and so credibly that the smallest events are important to the audience because they’re important to her. The experience of teen life, the sense of what is important and what is not, emerges powerfully.

Sachi’s family is well-drawn, as is her experience at school. Which is to say that the movie doesn’t just establish her character, but establishes her character within a social setting. This film is the third of a trilogy Yamamoto’s made dealing with the Tohoku region of northeastern Japan, and the place comes across vividly. 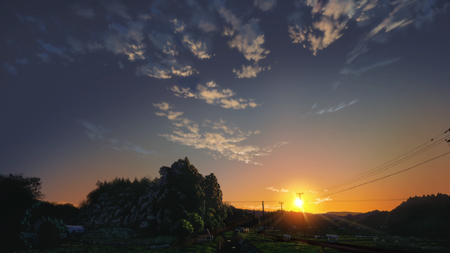 In fact, what is most unreal and dramatic in the movie is the scenery. The rural setting is colourful and attractive, but the sky and sunsets in particular are lovely. The way the natural world’s depicted justifies the use of animation to tell the story: the way the film shows light and the kinds of hues that emerge at twilight comes off woonderfully in the traditional 2D animated look Yamamoto uses.

This is also, of course, a kind of beauty that works with Yusuke’s ambitions as a painter. I’ve noted before this year that it can be tricky for a film to get across the power of visual art created by one of its characters; here there is no problem. Dramatically Yamamoto conveys what Yusuke’s art does, and visually we see it reflect the beautiful scenery so that his talent comes across.

It’s notable that the film’s about the meeting of two young people who between them represent arts of sight and sound. Those things are of course the constituents of film, and Twilight works as a way to demonstrate the power of those arts together. It should be obvious, but Yamamoto doesn’t emphasise this. Instead he tells a straightforward and basically mimetic story, letting the themes emerge from the background. 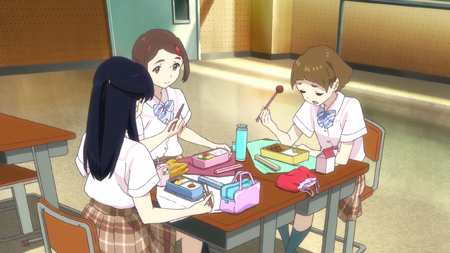 As a result there’s an adult feel to the anime despite the youth of the protagonists. The director trusts the audience to see things for themselves, but there is nevertheless a feel of an older person looking back on youth as much as there is a feel of young people discovering the world for themselves. I imagine this movie would work well for a teenager looking for a gentle romance. It’s also effective for an older person looking for a tale with thematic richness. The movie builds a world of art; a beautiful setting for Yusuke to paint, but also a setting with different characters and subtexts.

Twilight is not a film that relies on grand action or massive set-pieces to establish its importance. It’s a gentle, human film about love and art. And it depicts the world in a way that plays to the strengths of the medium of animation while still being fundamentally realistic. It might not have worked at a full feature length; might have been simply too slight. But at under an hour it tells its story at just the right length, depicting character without wasting time. It is a lovely film that succeeds at what it’s trying to do.