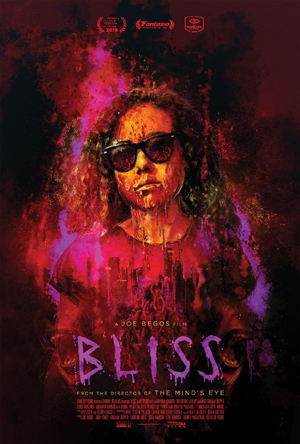 I had been planning to head home after the first movie I saw on July 22, Fly Me to the Saitama. But looking at what followed it in the Hall Theatre, I decided to stick around. Bliss was billed as an unconventional punk vampire movie, and indeed director Joe Begos introduced it to the crowd as a “hallucinatory splatter movie about sex, drugs, rock n’roll, and vampires.” Fair to say I was curious, unsure whether to expect something very good or off-the-rails bad. What I got is maybe best described as off-the-rails good.

First came a 13-minute short, “MJ,” directed by Jamie Delaney from a script by Delaney and Coral Amiga. Amiga also stars as Mary Jane, a quiet, isolated young woman who becomes increasingly wrapped up in social media and online hook-ups. It is not long before this obsession turns violent. It’s a well-shot film, with engagingly minimal dialogue. Amiga underplays her part to good effect, letting viewers alternately sympathise with and be appalled by her character.

Then Bliss. Dezzy (Dora Madison, of various TV series including Dexter, Chicago Fire, and Friday Night Lights) is an artist in Los Angeles, behind on her rent and about to get kicked out of her apartment-studio. She’s promised her agent a new painting, but hasn’t completed a picture in some time as she tries to get clean. Then she visits her old drug dealer Hadrian (Graham Skipper) and his pals (one of whom is played by George Wendt, of all people), where she gets a new drug called bliss, which fuels a wild night for her with her friend Courtney. And afterward, everything is different. Dezzy begins to paint again, sometimes without being conscious of what she’s doing, creating a weird hellscape. But her behaviour becomes more erratic and extreme. And bloody.

Also disorienting, even psychedelic. The haze of LA smog becomes the haze of altered consciousness. Dezzy finds her new creativity fuelled by bliss, meaning she has to seek out more and more of the drug to keep going. As she’d drawn into her painting, the people around her — landlord, agent, friends, boyfriend — become at best irrelevant and at worst obstacles to be dealt with. She is the painterly equivalent of a poète maudit, and even if there were nothing else happening in it Bliss would be notable for its depiction of artistic obsession with a woman as the tormented transgressive genius at its heart.

It is a very unintellectual (though not necessarily anti-intellectual) look at artistic obsession, though. There is a lot of viscera, and Madison spends a lot of time naked, including while working at the easel. This ought to feel ludicrous, exploitative, or both; it doesn’t, thanks largely to Madison’s talent and conviction. The film is locked on Dezzy as a character, and Madison carries it capably. She’s got a charisma that keeps the story from feeling monotonous or predictable, even though the outline’s familiar and the sequence of events — Dezzy looking for drugs, Dezzy engaging in extreme behaviour, Dezzy painting — repetitive. Each of Dezzy’s adventures feels like it goes a step further than the last, and Madison’s depiction of Dezzy’s reactions helps sell us on that.

Dezzy’s a strong character, too, tough and talented yet self-destructive and unable to deal to with people. Self-consciously theatrical, always projecting toughness and rage, she makes a good protagonist, and someone we can believe making the choices she does. We’re convinced art’s important to her, partly because Madison brings it across, and partly because the stylistic visual choices of the film anchor us in her consciousness. Bliss gives us a heightened reality, with metal always roaring in the background, and ugly things seen in beautiful colours. It feels a little like a distant trashier cousin to Mandy, just on the edge of of reality, consciousness impaired, visuals about to burst into full-fledged hallucination.

Dramatically, Dezzy’s working to a deadline to get her painting done, and this is more effective at giving the narrative urgency than it should be. Profane semi-vampiric painters shouldn’t care about deadlines. And yet somehow it works, somehow the desperation comes across. At the same time Dezzy’s progress on the painting becomes a kind of countdown. You know that the painting’s bound up with her life and sanity; you know it will take an especially bombastic scene of excess to get it completed, and you know nothing good will happen to her after that.

The painting itself makes a good objective correlative for the film. It’s the sort of thing you’d see on a metal album cover or the side of a van, but it’s well-done as far as sort of thing goes. For the sake of the story it doesn’t have to be an actual work of genius so long as the characters respond to it as a work of genius, which they do; but it works especially well because you have the sense that it may actually be a work of genius within the particular fictional world of this movie. This is a story that’s straddling a weird line between demonically serious and exploitation campiness. I suspect that if you think Bliss is strictly or ultimately one of those things or the other, then you’ll think it’s a failure. To me it does both things at once, and follows through on them to the end, and so I feel it works.

Dezzy’s final moment, the inevitable unification of artist and creation, drives this home. It’s painfully earnest to the point of being almost parodic. But not quite. The finished painting is so obvious in its imagery it’s difficult to take seriously — except then it’s so straight-faced it reaches the kind of emotion that drives that imagery in the first place. It’s not that there’s a balance here of reality and parody. It’s that the movie’s both over the top and also deeply serious about its themes at the same time, and so somehow in the end feels emotionally real — or at least evokes the same sense of identification as something emotionally real.

As you might expect, it’s not flawless. Not all the attempts to be edgy work. In general I think it’s difficult to present sex as transgressive without simply turning it into violence, and I don’t think Begos came up with a way to do it. More prosaically, while the movie appropriately spends a lot of time in seedy bars and the bathrooms of seedy bars, I’m a little surprised at how clean the bathrooms are, how lacking in literal shit and grime. Maybe most significantly, while Dezzy’s an entertaining character to watch on screen, it’s unclear how she’s able to function in society at all given how abrasive she is to everyone around her — how she could maintain a friendship, even one with a friend like Courtney.

Still, these are relatively minor problems. I thought Bliss was an engaging film, one that effectively created its own mood and indeed headspace. It’s bolstered by the best soundtrack I’ve heard in a long time. I can understand reviews that call it too edgy for its own good, and if it were much longer than 80 minutes, I’d probably agree. But as it is I’d say it’s the right length to work, thanks to an engaging lead performance and stylish cinematography.

After the film, writer-directer Joe Begos took questions. The first was what inspired the grittiness of the film. Speaking rapidly (challenging me to keep up with my handwritten notes), he said he never thought he’d do a vampire movie, but it started with the idea of an artist collapsing into madness. He wanted to tell an unconventional vampire tale, with lots of mirrors. And he wanted to show the grunginess of Los Angeles. Asked about shooting on 16mm, he talked about his first experiences watching horror films, and said he wanted to bring more; he wanted to deal with one character without cutting away, and although he shot a beginning and ending without Dezzy he ended up cutting them. He said this was a challenge to write well.

A question came about Hadrian, an unusual drug dealer. Begos said he used to buy drugs from friends, and said he’d been inspired by the documentary about Lemmy from Motörhead. Asked about the casting choices, he spoke about gut choices and writing roles for friends. He said he had some problems finding people for the role of Dezzy, as he could only pay $100 a day for a role demanding nudity and extreme emotional performances. Dora Madison helped him refine and improve the character; interested in changing her image as a performer, she would insist on pushing things, which he appreciated. He’s already made another movie with her (VFW, currently in post-production, according to the IMDB). He said he wrote the role based on himself, and she got into the part wearing his clothes by wearing his clothes and speaking like him to the point she could rewrite her dialogue to sound more like him than he did. 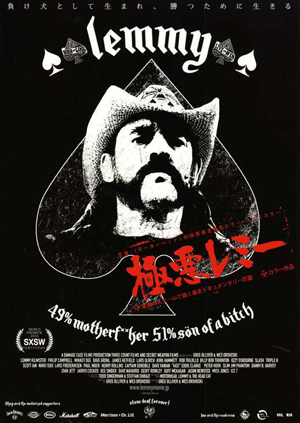 Asked then about the connection between art and drugs, he said for an artist art is an addiction. There’s a thrill of finishing a work, but drugs can be crutches. He spoke about experimenting with DMT, and writing while on it in 20- and 24-hour sprees. He’d wake up, work out in the shower how a scene would play out, then open his computer and find he’d written it without remembering it. He said it was cathartic to make the movie, and to see it come out.

Asked about his vision of the painting in the film, he talked about working with Chet Zar, who designed the Tool music videos. Begos sent him the script of the film, which he read as a courtesy before accepting. He turned down Scary Stories to Tell In the Dark to work on Bliss, and has said he’s glad the movie ended up being good. Asked how George Wendt came to be in the movie, Begos said he’d worked with him years ago in a play and wanted to put him in a movie. He got him by inviting him to come, hang out, drink, and “get killed by a hot chick.” Asked what he used for blood, Begos said corn syrup and food colouring. And, finally, asked where to get a friend like Courtney, Begos said to just move to LA — people like Courtney were about 30 percent of the population.