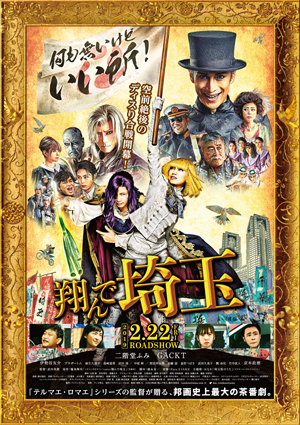 On Monday, July 22, I was back at the Hall Theatre for one of the movies I was most anticipating. It was a new live-action manga adaptation from Hideki Takeuchi, director of the Thermae Romae films: Fly Me to the Saitama (Tonde Saitama, 翔んで埼玉). The script by Yuichi Tokunaga adapts the comics from the early 80s by Mineo Maya, although apparently the filmmakers had to finish the last two-thirds of the story for themselves.

The film tells a story inside a story. In the frame tale, a family drives from Saitama, a prefecture on the outskirts of Tokyo, to a party in the heart of Japan’s capital where the daughter is to be engaged. On the way, the radio tells a peculiar story about a fabled time when the people of Saitama were oppressed by their metropolitan overlords in Tokyo. They had to obtain special visas to enter; armoured police used facial-recognition technology to pick out any residents of Saitama who snuck through the massive border fences. The good folk of Saitama were second-class citizens at best, exploited labour for the greatness and glory of the glittering city of Tokyo. In this dystopia Momomi (Fumi Nikaido, Inuyashiki), son of the governor of Tokyo, is president of the student body of an elite academy; enter new student Rei Asami (Gackt), just back from studying in America. Momomi falls for the charismatic Rei, but Rei’s hiding a dark secret: he’s actually from Saitama, and is plotting the downfall of Tokyo. This is exposed surprisingly early, setting Rei and Momomi off on a journey that might change the world.

A couple quick notes about the actors mentioned above. First, Gackt is the professional name of a singer who the IMDB assures me is “the most successful male soloist in Japanese music history.” He’s in his 40s, and playing a teenager. Fumi Nikaido is a woman playing a male role; the manga was a boys’ love story, and the movie does faithfully (if briefly) refer to Momomi as male, and keep him in male dress. I have no idea how this plays out in the context of Japanese gender roles, but the point I want to get at is that you don’t wonder about either this or Rei’s age, because this movie gives every impression of being completely, utterly, joyfully uninterested in any of these details. The actors act, as theatrically as possible, and they are committed to their roles, and nobody mentions age or gender, and so we are pulled along into the berserk strangeness that is the story. 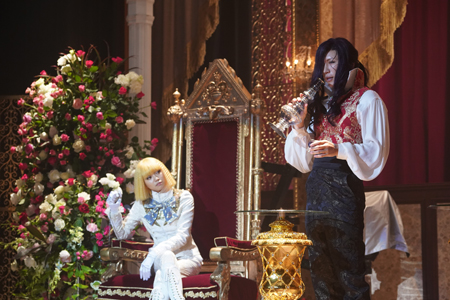 This is a film that makes a major set-piece out of a massive battle between Tokyo suburbs, a large part of which is unfurling banners of the celebrities born in said suburbs. This is a film in which Momori has to make a desperate trip to another suburb, which is so primitive it consists of jungle with pteranodons flying around in the background. This is a film in which characters wear steampunky outfits of surpassing grandeur at all times. This is a movie that steals a famous bit from the Mission: Impossible franchise, then has characters in the frame story comment on it.

This is a Hideki Takeuchi movie, is I suppose what I’m saying. The Thermae Romae movies married imaginative note-perfect surreal humour with strong characters and an engaging emotional arc, all wrapped around a theme (cultural appropriation) that had no business being as knock-down drag-out hilarious as Takeuchi made it. All of that applies here, as Takeuchi tells a weird fable about immigration, racism, assimilation, and inequality — and you almost don’t notice until the movie’s over, because that sort of thing shouldn’t be this funny.

The humour’s more-or-less clean, give or take the occasional breast joke. It’s also surreal, perfectly timed, and unrelenting. There are a lot of references specific to Tokyo, which I did not get but observed were present. The film was easy to grasp nevertheless; if you have any familiarity with a major city and its relationships to its suburbs, you’ll be able to get a lot of the jokes. This is a story about suburbs feeling exploited by the financial and business elite of the metropolis, who in turn look down on the suburban hinterland as the home of the terminally uncool and possibly intellectually challenged. I don’t know if that’s ‘universal,’ exactly, but I have to think it’s a not uncommon situation. 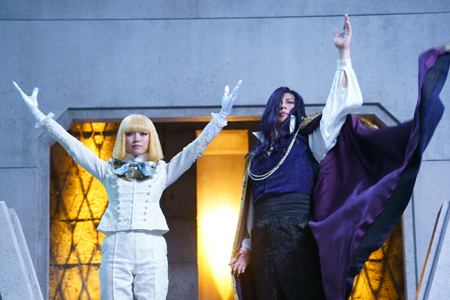 Universal or not, Fly Me to the Saitama succeeds at specificity. It builds its own loopy world big enough to include anything including the occasional random herd of gnus. The mishmash of elements ought to be garish, for the costumes if nothing else, but it isn’t. There’s some kind of incoherent coherency that keeps it going. The genre elements help, as the movie manically and knowingly and even lovingly engages in every kind of melodrama trope you can think of — disguised heroes, hidden lineages, secrets that come to light, sub-boss villains with long-held grudges, all that sort of thing is here, larger than life just as everything here is larger than life.

Oddly, it’s all somehow surprising. That is, as in the best genre stories, you know roughly what’s going to happen, but not exactly how. Notably, Rei doesn’t spend anywhere near as much time undercover as you might imagine. There’s too much story for the movie to chew through. This is where the frame story helps, letting the main story move forward quickly, commenting on it, giving it a new angle — and showing how the story’s supposed to work, as it profoundly moves the parents of the young woman on her way to her engagement party, while she herself is untouched. Yet at the end both the main story and the frame are wrapped up well, with a kind of generous good humour.

It’s difficult to explain that humour, or even to give many examples of it. It’s inherently cinematic, relying on timing and delivery and ridiculous lines delivered straight by people in ridiculous costumes. My recommendation is just that you go see the movie itself. It’s a funny, clever story that’s told in a thoroughly cinematic way, and has a warm-heartedness that can’t help but be touching. Which for a movie like this is about all I can think to ask for.