Since J. Barton Mitchell and I are in the same writer’s group, I had the privilege of reading the script for the first episode of Derelict before it was cast. If you liked Mitchell’s book, The Razor, or are otherwise a fan of action packed, hard science fiction, you definitely don’t want to miss this. Mitchell has provided the following interview, discussing the project in depth, but first, check out the first episode, then go back the production of future episodes here.

Emily Mah: As a science fiction author, your novel Valley of Fires concluded the Conquered Earth series (and was awarded best science fiction novel of 2015 by the RT Book Review), which included Midnight City and The Severed Tower. Last November you had The Razor (picked by Amazon as one of the best Sci-Fi books of 2018). With Derelict, you’re exploring a whole new medium: narrative podcasts. Why turn to podcasting?

J. Barton Mitchell: I actually started on the film side of things, my first success was as a screenwriter, I came to fiction later on. As a result, I tend to think cinematically, even when writing books. The narrative podcast medium was kind of a natural fit because it’s sort of cinematic without visuals (odd as that sounds). It’s, basically, like you’re listening to a movie. The format also lets you do projects that would be completely impossible from a budget standpoint if they were in film or TV. Derelict would be over a $100 million dollar budget as a movie…but, as a podcast, I can make it in my basement, and it’s almost just as visceral and engaging. I think that’s really exciting. The other thing is that, for me, the best kind of storytelling is where the audience is allowed to participate in the storytelling process. In other words, they get to fill in the blanks with their imagination. The audio format allows for that in a major way, because (like a novel) it’s sans imagery. The audience has to imagine the visuals themselves. I think that’s really exciting too.

Emily Mah: So, no spoilers, but what’s Derelict about and why should I tune in? 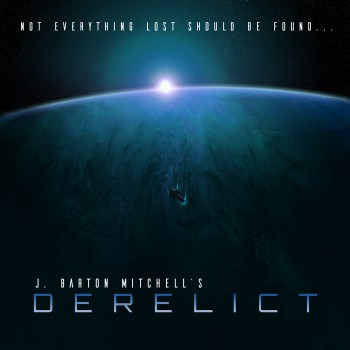 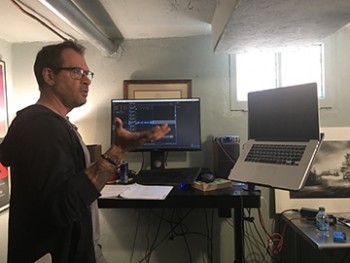 J. Barton Mitchell: When four disgraced scientists are given one last chance to rebuild their broken lives, they accept an offer from their former employer, the galaxy’s most powerful corporation, to recover a mysterious derelict spacecraft floating in deep space… but to survive the assignment, they will have work together to unlock the frightening mysteries of what happened on the ship, and confront the malevolent force that has taken it over.

I will say, in regards to the “malevolent force”…there are no aliens or ghosts or demons in this story. In other words, it is not an Alien or Event Horizon clone. What’s going on story wise is, I think anyway, wholly original. What’s also intriguing for me is the character set, which I kind of conceived as a Dirty Dozen group, but instead of soldiers or tough guy types, it’s just a group of washed up, desperate scientists, each looking for their own version of redemption. They’re aren’t completely equipped for what they’re going to face, they’re not weapons experts or anything, all they have is their brains and the desperation to survive. Combine with the fact that they’re all strangers and kind of don’t trust each other, it makes for a pretty compelling situation.

Emily Mah: What sets Derelict apart from other narrative podcasts I may have heard?

J. Barton MItchell: ie’re really trying to make the audio equivalent of a high-concept, blockbuster movie, which means the sound design is our big budget CGI. So, the mix is really an impressive thing, and one of the main draws of the series. You should listen to it with headphones if you can, it’s really a very visceral experience. In addition, a lot of it (especially the later episodes), is almost entirely done as radio talk, which makes it feel as if you’re listening in on something happening in real time, and yet are unable to help. It brings an immediacy to the experience you don’t get in most audio dramas.

Emily Mah: Who’s in it? What can you tell us about the cast? 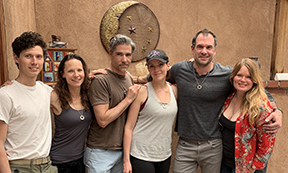 J. Barton Mitchell: Obviously, I’m somewhat obligated to say my cast is awesome, so it’s lucky for me that they actually are. We were really lucky to find a next level talented group of actors for this, and they have a wide range of experience in traditional, film, and voice acting. Whether it’s our lead, Chad Morgan, who worked with Michael Bay in Pearl Harbor and starred in Robot Chicken, to Ian Geiberger who’s crazy talented not just as an actor but also as a sound designer (his design work is all through the first episode), to Dani Payne (who has a recurring part on Better Call Saul this season), to Michael Mau and JD Cerna who are as amazing writers as they are actors, we have this really incredible group who have such a depth of talent in different areas they can bring to bear to inform and elevate their performances. I feel really lucky we got them, and that they are as passionate about the project as I am. Most of them are traveling from outside New Mexico to participate.

Emily Mah: How long will the season be? How long do you see the story continuing?

J. Barton Mitchell: Right now we are planning on ten episodes per season, each around 30 minutes long (though episode one does clock in a little heavier), and I have it plotted out for at least two seasons. So, there’s a lot of story to come. 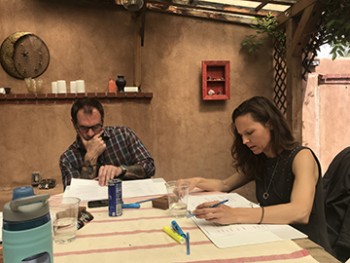 Emily Mah: Where are you at as far as funding for the show?

J. Barton Mitchell: We are currently crowdfunding for the show on Indiegogo, and once we get going with production, we’ll also be implementing an ongoing Patreon campaign for fans to contribute and support the story. We also signed with the FutureX podcast network, who is actively pursuing sponsorship and advertising possibilities, so, between the two, I’m confident we’ll be able to continue the current and future seasons.

Emily Mah: Why is it important to you to tell stories about the future? Why choose science fiction?

J. Barton Mitchell: As a writer, I’m not all that interested in being a futurist or predictor of things to come. I’m just not as smart as someone like William Gibson. My influences (in science fiction and other wise) have always drifted towards the pulp side of things. Flash Gordon. Buck Rogers. Star Wars. John Carter. I just like writing future stories because it’s a world apart from our own, and allows me to exist in a major way within my imagination. I can create entire worlds (or galaxies), which is what really appeals to me, both as a writer and a reader. The escapism. Derelict is nothing if not good escapism.

Emily Mah: How can our readers learn more about DERELICT and get involved in helping bring it to life?

J. Barton Mitchell: Check out our Indiegogo page. There, you can listen to the first episode, get more info about the cast and producers, and check out some of the cool perks we’re offering to contributors. Otherwise, if you like what we’re doing, follow our social media, and tweet and post about it. Just getting the word out is a huge help. And you can drop me a line with your thoughts, if you want, from the Derelict website. The Black Gate readership is an awesome one, and exactly the kind of people this entire project was made for, I think anyone finding it from here is really going to respond to it positively. 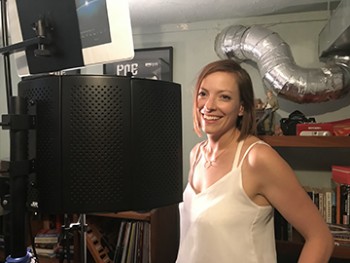 Emily Mah: Thanks for taking the time to talk to us about Derelict. It’s a really unique and exciting project, and I’m excited to see where it goes.

J. Barton Mitchell: Thanks, Emily. You and me both!

You can read more about Derelict, listen to the first episode, and interact with Mitchell and everyone else involved at the following places:

Emily Mah is a writer and the owner of E.M. Tippetts Book Designs, a company that provides formatting and cover design services for independent authors and publishers. Her last post for Black Gate was about THEN AGAIN: Vintage Photography Reimagined by One Artist and Thirty Writers.