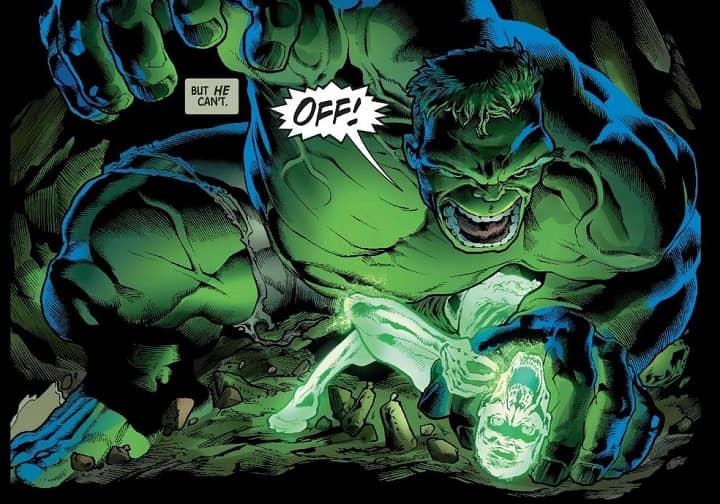 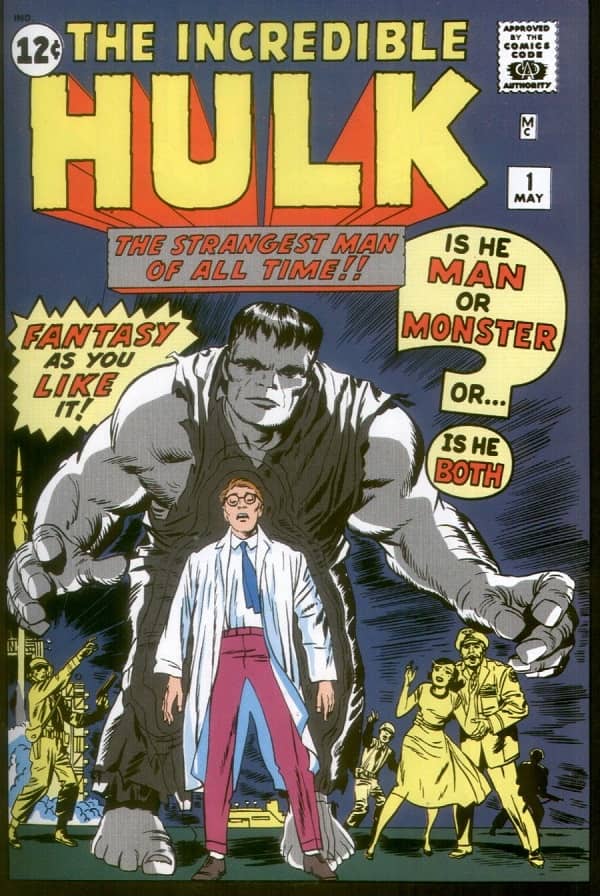 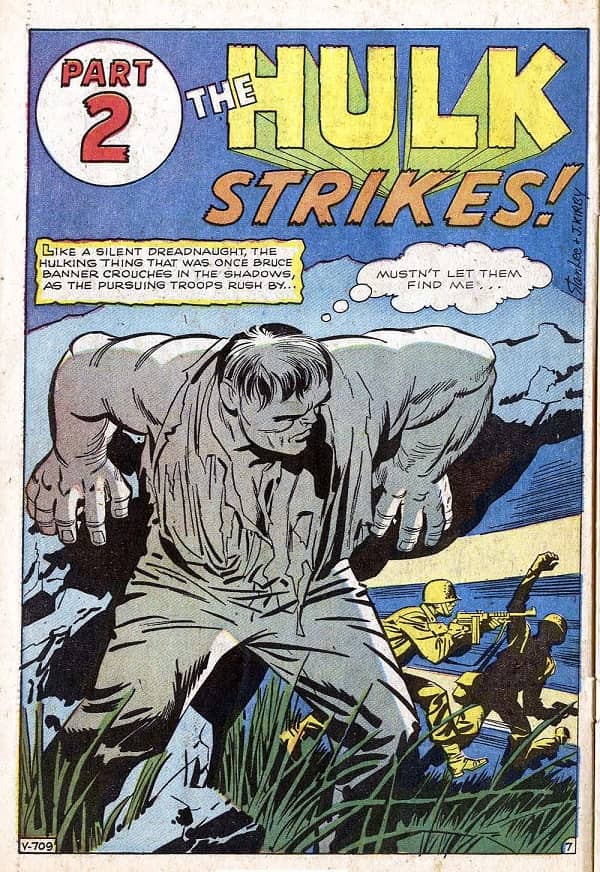 The Hulk later lost his intelligence and cunning and became the rampaging Hulk of the Silver and Bronze Ages that I remember from The Defenders and various guest appearances. 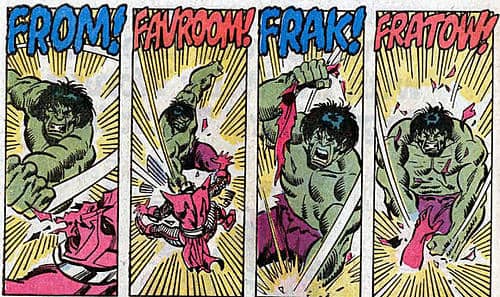 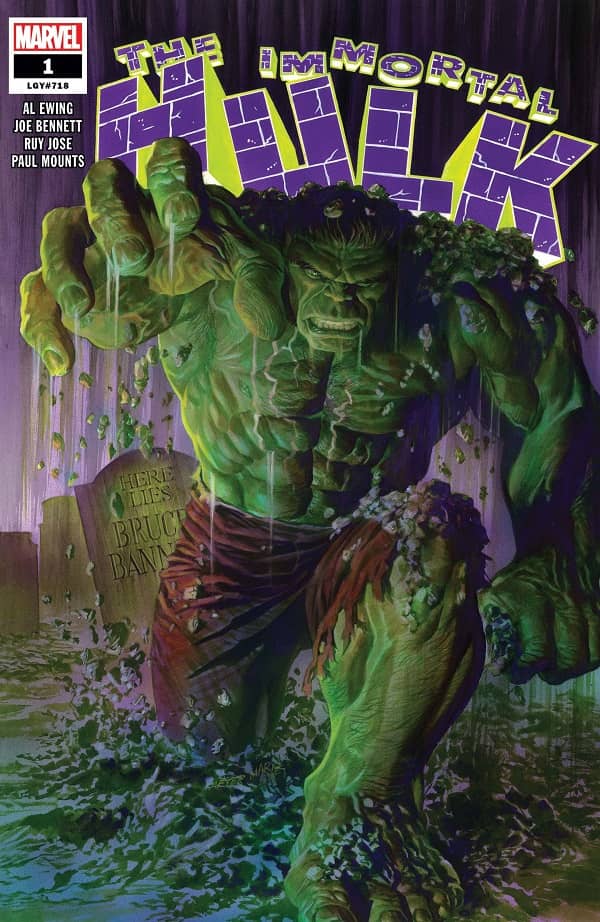 The series premise is that Hulk can’t die. Under any circumstances. This makes him a terrifying force for whom no threat can be serious. The Avengers find this out the hard way when they try to capture him in issue #7. Caution: very minor spoilers of 6-month old material ahead. 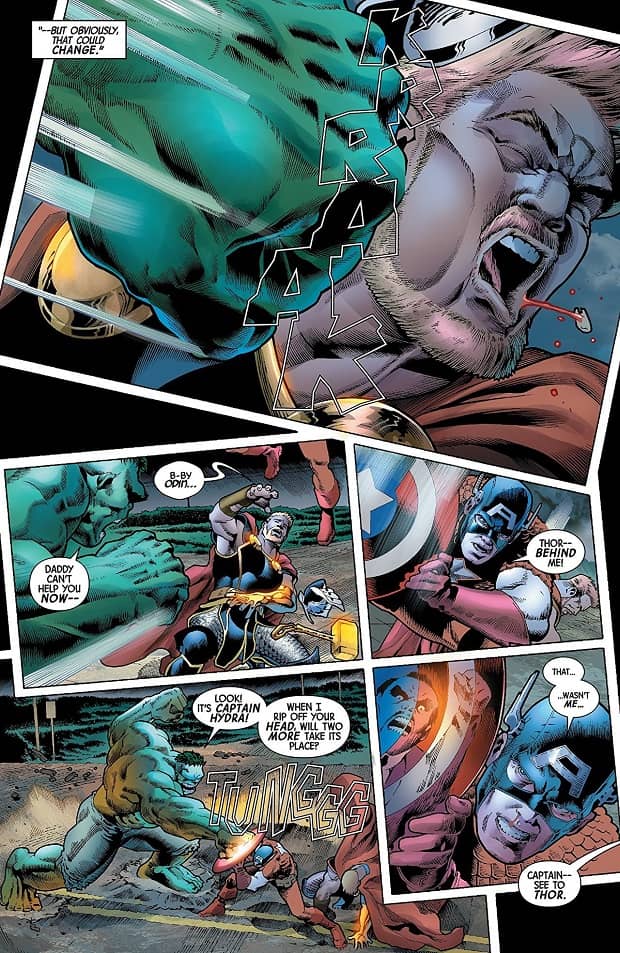 It’s not just that Hulk is scientifically immortal. Thor recognizes something supernatural in the Hulk’s immortality – something possibly divine. Of course, maybe Thor is wrong, because when Hulk hit him, he fractured Thor’s skull with a single punch that probably concussed him. 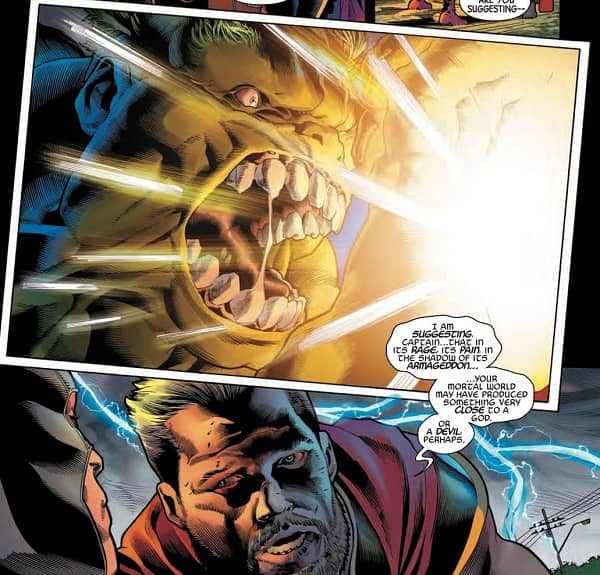 If the state of the world had produced a new god, or devil, that may explain some of the other elements of this new incarnation of the Hulk. 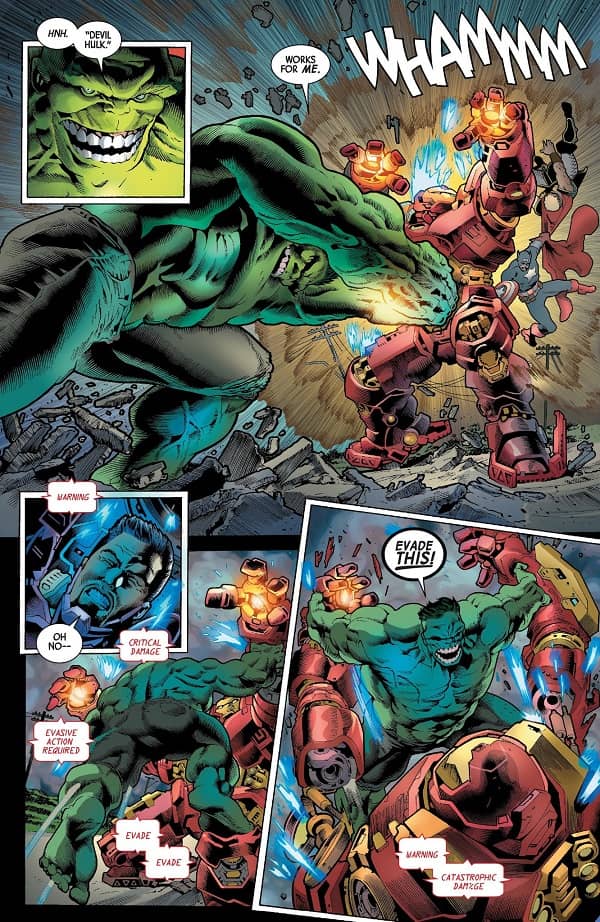 This Hulk can smell lies and see inside the souls and crimes of men. And his intellect and cunning is terrifying in his new role as a kind of force of vengeance. In his first outing, he goes after a stupid kid who killed three people in a botched gas station hold up, including Banner. 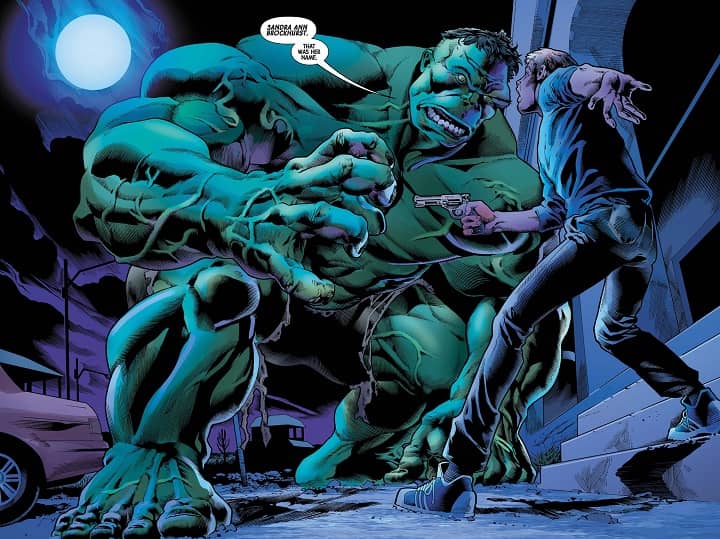 He later detects strange gamma radiation, like the kind that made him, and discovers the hidden crime that is slowly killing a small midwestern town.

But the series is also about the shared madness of the Hulk-Bruce Banner. Banner is cursed to become the monster each night, but he sees the monster in every mirror, in every reflection, knowing it is him, his intellect and cruelty and anger. 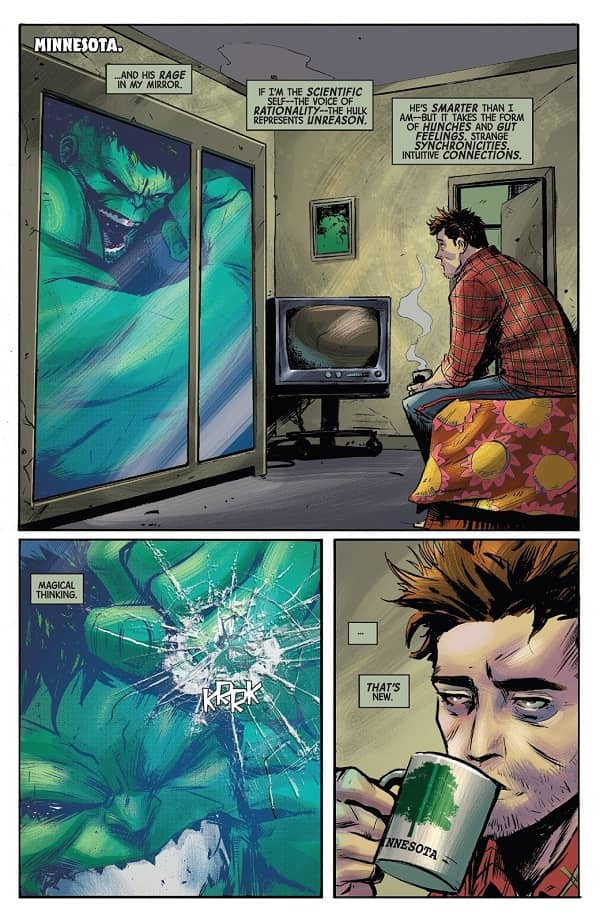 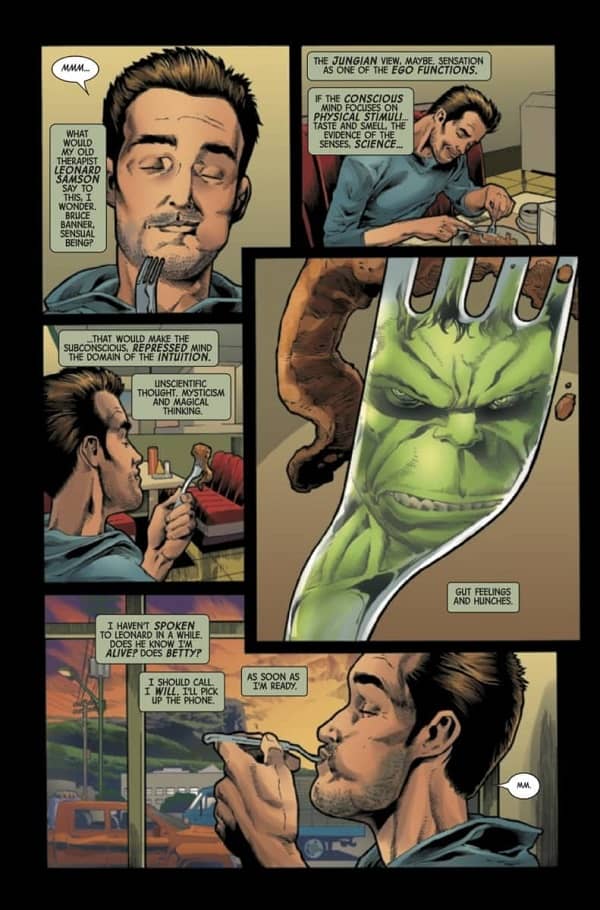 The horror of The Immortal Hulk comes in two main varieties: monster horror and body horror. In the monster horror vein, the story concerns the horror of a world in which monsters exist, in which destruction can happen to anyone anytime. We see all the characters affected by the Hulk, the people who have to hunt him, and all the people affected by the evils of the world the Hulk will avenge. Some of Hulk’s solutions to dealing with evil people is pretty Old Testament. 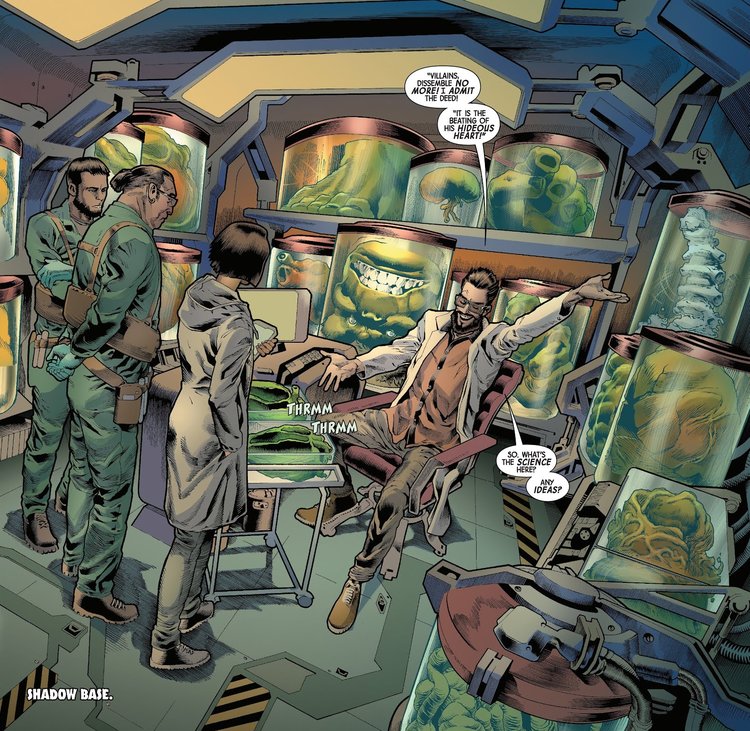 The body horror is apparent in Banner’s early transformations, but Ewing and Bennett dig deep into the question of what can be done to stop an immortal Hulk. Being buried alive is looked at a couple of times, not always with just the Hulk, but in a particularly horrific sequence, when the Hulk is captured, he’s dissected and disassembled to keep him imprisoned. 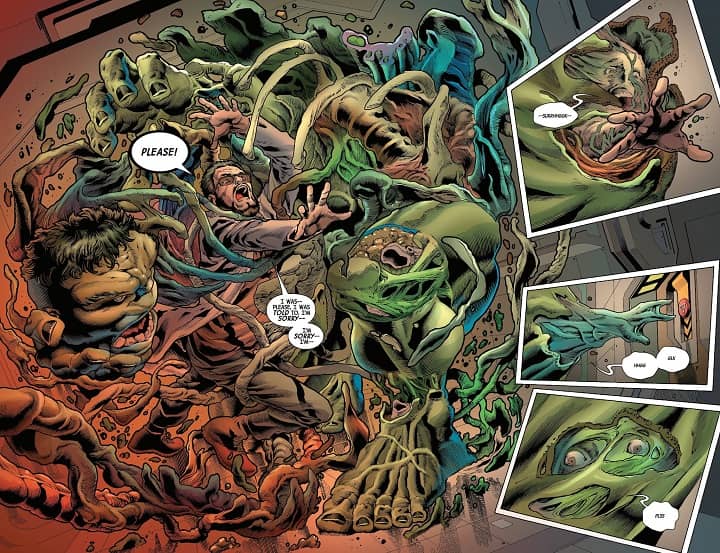 Since this is horror, the solution of course goes disturbingly bad for all involved.

I think Ewing and company have done some fascinating, compelling work by going back to the basics of the Jekyll-Hyde concept and taking it seriously and running through all the implications.

I’m reading it on Marvel Unlimited, so I’ve got access to the series up to #9 so far, out of 18 or 19 issues that have hit the shelves. It’s also out in trades. Check it out any way you feel like. It’s really smart, mature superhero comics.

In two weeks I’m going to talk about either Cory Doctorow’s brilliant Radicalized or about the recent and upcoming issues of 2000AD.

Derek Kunsken writes science fiction, fantasy and horror in Gatineau, Quebec. He tweets from @derekkunsken. His first novel, The Quantum Magician, has been nominated for the Locus Award (Best First Novel), the Aurora Award (Best Novel) and the Chinese Nebula (Best Translated Book).

The Hulk is perhaps the most unique of the characters co-created by Stan Lee in the early ’60s, as much a creature of horror as well as a “superhero”. The horror aspect was often subdued, at least throughout most of the 1960s and 1970s stories, but it was always there. Haven’t read Ewing’s take but from the excerpts here certainly appears very intriguing.