Edgar Pangborn died in 1976. His last book, the collection Still I Persist in Wondering, was published in 1978. The first Pangborn story I can recall reading was his splendid tale of the first landing on an alien world, and the majestic and deadly creatures found there, “The Red Hills of Summer,” in Gardner Dozois’ anthology Explorers (2000). It was enough to turn me into an instant fan.

I never read any Pangborn during my formative teen years, but he still managed to feature prominently in my early science fiction education. That’s chiefly because the reviewer I read most avidly at the time, Spider Robinson, was a late convert and a huge fan. In his column in the March 1976 Galaxy magazine, Spider raved:

I’ve only just discovered Edgar Pangborn. I haven’t been so delighted since (years ago, thank God) I discovered Theodore Sturgeon. In fact, the comparison is apt. I like Pangborn and Sturgeon for very similar reasons. Both are thoughtful, mature writers, and both remind me at times of [John] Brunner’s Chad Mulligan [the hero of Stand on Zanzibar], bitter drunk, crying at the world, “Goddammit, I love you all.” Both are bitterly disappointed in man’s evil, and both are hopelessly in love with man’s good. Both are addicted to creating and falling in love with warmly human, vibrantly alive characters, and making you love them too.

In the November 1976 issue of Galaxy, shortly after he learned of Pangborn’s death, Spider wrote a bitter rant of his own, lamenting the loss of a great writer and the fact that the world had stubbornly refused to acknowledge his achievements. He held up Pangborn’s 1964 novel Davy as a testament to what the field had lost. I’m not sure there’s a short story from 1976 that’s lived in my mind as vividly for the past four decades as Spider’s review of Davy. Here it is.

Take Davy. A Hugo nominee for 1965, it lost out, for God’s sake, to The Wanderer (about which more next month) and is billed in Ballantine’s current edition as “The Tom Jones of Science Fiction”… Davy is the ultimate After-the-Collapse novel, the only one I’ve ever read that totally rang true (well, Earth Abides comes close — but Stewart achieved verisimilitude through facts, and painstaking extrapolation. Pangborn does it with characterization.) I see where Ballantine got the Tom Jones allusion — but I think it reads more as if Mark Twain had written Huck Finn as an adult sf novel. It is a warm, vibrant, laughing, sprawling giant of a book. It is, as Sturgeon has called it, “a rollicking, cadenced, surprising, provocative and musical book.” It evokes feelings the way a master musician elicits notes from his instrument: in chords, and breathtaking arpeggios. It has significantly changed my life and my writing, changed the way I perceive my fellow monkeys, made me happier to be alive. It is what the doctor ordered and why the preacher danced. It is good…

Pangborn’s characters are lovable… [they] are people I cherish, friends I’m glad I made, and I’m deeply grateful to Edgar for introducing me to them. I wanted to meet him, to thank him for becoming a writer. A man who can evoke that much love for totally imaginary people cobbled up out of the spare parts in his subconscious is a rare and splendid thing, an asset to the human spirit.

There is no plot to Davy. A plot would overcrowd it. It has, rather, a… direction that it moves in.

Now I would like someone to introduce me to review copies of [Pangborn’s] West of the Sun, Company of Glory… and the host of uncollected stories and novelettes set in the post-Holocaust world of Davy that will surely (please God) be collected and published soon. If any enterprising fan and/or bookseller knows where I can buy copies of same, I’d be happy to, whether or not I do get review copies. The same goes for Ten Tomorrows and Terry Carr’s An Exaltation of Stars and Universes 1, 2, 3, and 5, which Tom Pigaga says include recent short Pangborn.

I hope it takes me a lifetime to assemble and get to read all that Pangborn. ‘Cause that seems to be all there’s gonna be.

That’s a powerful review. It’s also a reminder that, in the 70s, it was often nearly impossible to find books once they’d gone out of print, even fairly recent ones, and even if you were one of the top reviewers in the field. And that you had to rely on the Tom Pigaga’s of the world to let you know where stories you were interested in had appeared. Just one of the reasons that fandom — and the fanzines that nurtured it — were so vital back in the day.

You can read Spider’s complete reviews in the online Galaxy archive, in the March 1976 and November 1976 issues. 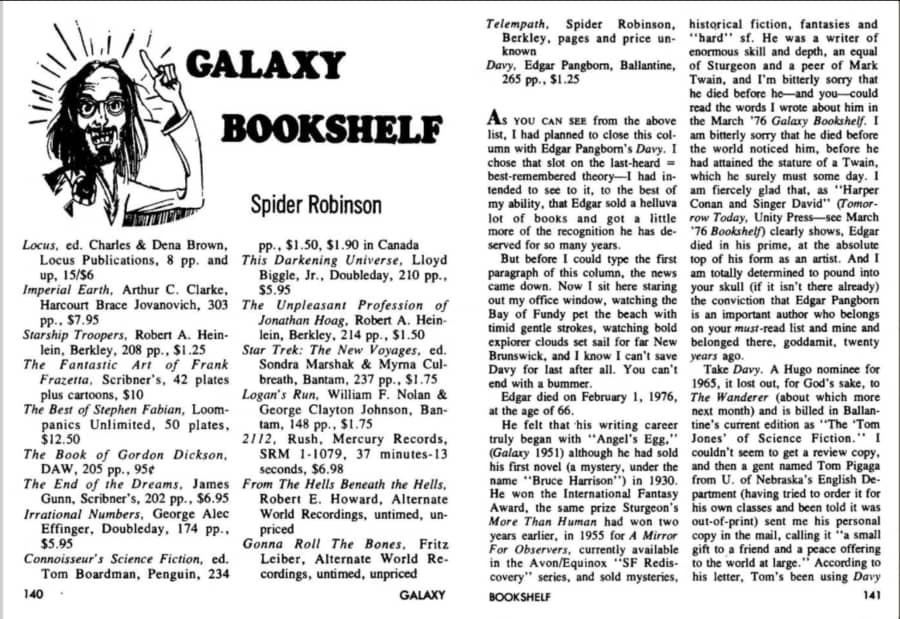 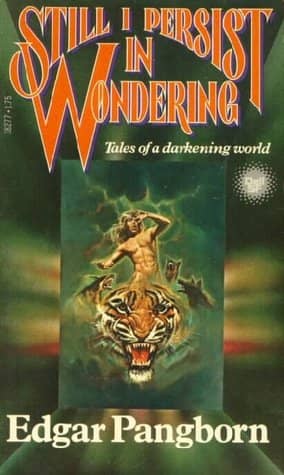 That collection Spider yearned after never came to pass. Some of Pangborn’s post-Holocaust stories, what came to be called his Tales of a Darkening World cycle, were included in Still I Persist in Wondering (1978), but many remained uncollected. ISFDB lists three novels (Davy, The Judgment of Eve, and The Company of Glory) and a dozen stories in the series, easily enough for a fair-sized collection.

Although he remains largely forgotten today, Pangborn is experiencing a minor renaissance. He was the winner of the 2003 Cordwainer Smith Rediscovery Award (there’s a fine appreciation here by Smith’s daughter), and there are several folks out there who continue to discuss Davy and his other work, including:

I began [intending] just to reread Edgar Pangborn’s post-holocaust Bildungsroman Davy but because I was also planning to reread Canticle for Leibowitz, which covers centuries to Davy’s decades I then began to ponder if it would be better to reread all the stories Pangborn wrote in that setting so I would be comparing similar spans of time or at least half a millennium to 1800 years. After all, both The Company of Glory and The Judgment of Eve are short and the collection Still I Persist in Wondering is under 300 pages. Of course, it all added up to something as long as The Past Through Tomorrow or Adventures in Time and Space. I am sure there is a lesson here somewhere and equally sure that I didn’t learn it.

Although he is comparatively obscure now, in the 1950s Pangborn won an International Fantasy Award for his A Mirror for Observers, a Hugo nomination for Davy (which lost to Leiber’s execrable The Wanderer ; what the hell, SF fandom?), and Nebula nominations for “A Better Mousehole” and “Mount Charity”. A fair fraction of his work was set the Darkening World, in a world where thanks to resource depletion, overpopulation, light nuclear war, and a host of almost certainly engineered plagues, civilization collapsed, leaving in its wake a small and infertile population of people to survive as best they can.

To make a bad situation worse, radical climate change and an implausible rise in ocean levels flooded many of the low-lying regions; this was in part compensated by the fact that very few children were being born and of those many were deformed. The culture of the islands of New England are neither charitable nor wealthy enough to give in to whatever rudimentary impulses they might have in that direction; “mues” are generally killed at birth and often their mothers are killed as well as a precautionary measure. 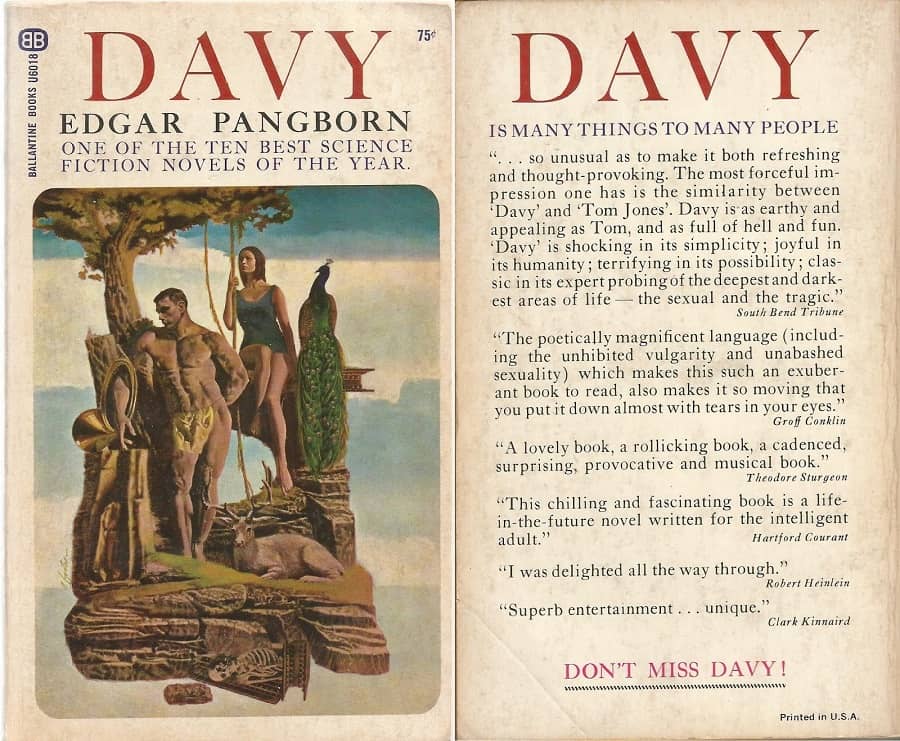 A Rich Library of Modern Science Fiction: The SF Gateway Omnibus Editions, including a Pangborn omnibus
James Davis Nicoll asks Who Are the Forgotten Greats of Science Fiction?

I’m not sure that the Hugos really tell you anything about the relative qualities of books, and certainly not the early years’ ones. This ballot was decided on a very small number of votes:
BEST NOVEL:
The Wanderer by Fritz Leiber (Ballantine Books) 52 votes.
Davy by Edgar Pangborn (Ballantine Books) 48 votes.
The Planet Buyer by Cordwainer Smith (Pyramid Books) 34 votes.
The Whole Man by John Brunner (Ballantine Books) 26 votes.
No Award. 14 votes.

> I’m not sure that the Hugos really tell you anything about the relative qualities of books,
> and certainly not the early years’ ones. This ballot was decided on a very small number of votes

A fair critique of the awards — except I think that in large part the Hugo voters got a lot right. In fact, looking at the dozen years between 1958 and 1970, their record is pretty astonishing. I believe this run is in large part responsible for the enduring reputation the award has today, even with all its recent troubles.

John,
You are being somewhat selective with that time period: if you go earlier you get Clifton’s novel, and if you go forward into the seventies and eighties you get a lot of middling work by Golden Age writers (Asimov’s ‘The Gods Themselves’, etc.).
Have you read Jo Walton’s book on the Hugo Awards yet? She thinks they get it right about (IIRC) two-thirds of the time (although that is probably both short and long lengths together).

Clute and Nicholls in the Encyclopedia of Science Fiction argue that on balance, the Hugo’s record is no spottier than the Nebula’s.