The 1973 Hugo Award for Best Editor went to Ben Bova. This was the first year of the Best Editor Hugo. It has been awarded every year since then, though in 2007 it was split in two, with a Best Editor Award given for Short Form and Long Form editors. This last reflected the fact that the Best Editor was a de facto award for Best Editor Short Form all along. (While I completely agree that “Long Form” editors are tremendously important to the field, and deserve recognition, I still think that the Hugo voters – even people, like me, who are pretty well connected – are not really competent to evaluate Long Form editing.) The original impetus, I believe, for the Best Editor Award was as a replacement for the Best Professional Magazine award, and the idea was that the increased importance of original anthologies to the short fiction market meant that just awarding a “Best Prozine” award would miss some really important editors. In the event, however, the only two Best Editor awards not linked to magazines were Terry Carr in 1985 and 1987, and Judy-Lynn Del Rey in 1986 (award refused by her widower, Lester Del Rey.) Indeed, the only winner of the Best Professional Editor Short Form Hugo who is not primarily associated with a magazine has been Ellen Datlow (whose win in 2005 of the Best Professional Editor Award can be partly attributed to her role editing Sci Fiction, but whose later Hugos presumably result from her original anthologies and her editing of the Best Fantasy and Horror (now just Best Horror) collections).

Bova’s fellow nominees in 1973 were two additional magazine editors, Edward Ferman at F&SF and Ted White at Amazing/Fantastic. (Bova, of course, was the editor of Analog.) Terry Carr was nominated, presumably for the original anthology series Universe and for his Best Science Fiction of the Year series. And Donald Wollheim was nominated, probably for his role as chief acquiring editor at DAW, and for editing The 1972 Annual World’s Best SF. Conspicuous by his absence is Ejler Jakobsson, editor of Galaxy and If.

Ben Bova, born 1932, began publishing SF with the Winston Juvenile novel The Star Conquerors in 1959. He was prominently associated with Cele Goldsmith’s Amazing in the following few years, mostly for his science articles, but also for some of his early short fiction. A few more novels and some short fiction appeared in the ‘60s, but his first real notice was probably for his 1970 Analog collaboration with Harlan Ellison, “Brillo,” which was nominated for a Hugo, and which was famously an (initially uncredited) inspiration for the TV series Future Cop. (People also link it to the film Robocop, but I don’t know that it was directly related to the later film.) 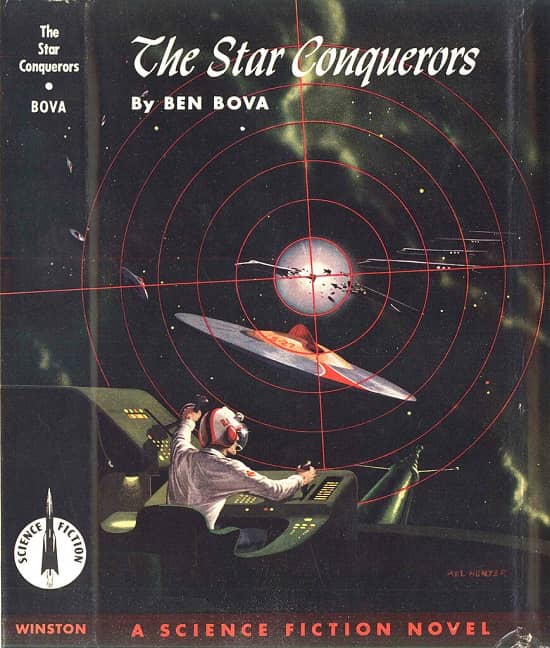 John Campbell died in July 1971. He was officially editor of Analog through the December 1971 issue. Ben Bova was hired late in 1971 as his replacement, and first appeared on the masthead as editor with the January 1972 issue. It seems to me that his hiring must have been a surprise, but it was very soon clear that he was an inspired choice. In my mind the issue that brought this home most clearly was the March issue. The cover story was “The Gold at the Starbow’s End,” by Frederik Pohl, a truly brilliant novella, combining scintillating complex hard SF ideas (complete with the obligatory math error) with sharp characterization and a truly cynical viewpoint. It’s a pure Analog story, but I can’t see John Campbell buying it. This issue also featured the first Larry Niven story to appear in Analog, “Cloak of Anarchy.” Niven was THE new hard SF writer of the ‘60s, but he couldn’t sell to Campbell. He became something of an Analog regular under Bova. And the March issue also included a Telzey Amberdon story by James Schmitz, “Child of the Gods.” Schmitz was a Campbell favorite, but this story and one more later in 1972, “The Symbiotes” were the last of his stories to show up in Analog. Bova supposedly told someone something to the effect that under him there’d be no more Telzey crap – not sure how true that is, but I do suspect that the Schmitz pieces from 1972 were part of Campbell’s inventory that he was working off.

Another writer who was regularly featured in Bova’s Analog was Jerry Pournelle, under his name or as “Wade Curtis.” The first appearances of “Curtis” and Pournelle were in the December 1971 issue, “Ecology Now!” as by “Curtis,” and the serial A Spaceship for the King as by Pournelle. As such it’s entirely possible that Campbell bought the first Pournelle stories, and Pournelle was a Campbellian writer – but Bova saw that he was a writer worth working with.

Another very significant story was Joe Haldeman’s “Hero,” in the June issue. This was the first part of what became his novel The Forever War. Again, it was a very non-Campbellian story that was still very much an Analog story. The final story that stands out as symbolic of Bova’s influence is from the December issue – George R. R. Martin’s “The Second Kind of Loneliness.” This was Martin’s first sale to Analog, and it was critical to his early career. Much of Martin’s later SF was published in Analog, including his Hugo-winning novella, “A Song for Lya,” and his first novels, Dying of the Light (serialized in Analog as After the Festival), and Windhaven (with Lisa Tuttle). Bova also bought Martin’s classic Nebula-winning novelette, “Sandkings,” for Omni.

It’s my view that Ben Bova thoroughly deserved this 1973 Hugo as Best Editor, for the sheer quality of the magazine, and for his deft handling of the transition from a legendary editor. He would go on to win the first 5 Professional Editor Hugos, and one more in 1979, for his work in 1978, when he switched from Analog to Omni. Bova left Omni in 1982, handing the fiction editor reins to Ellen Datlow (Robert Sheckley had also worked with Bova in previous years). Since then Bova has been primarily a writer of fiction, and he’s put together an impressive body of work, mostly scientifically rigorous SF set in the Solar System in the relatively near future – novels like Millennium, stories like the Sam Gunn series, and his ambitious “Grand Tour” series of novels set throughout the Solar System in a consistent future.

Rich Horton’s last article for us was a look at the 1973 Locus Award winner for Best Fan Writer, Terry Carr. His website is Strange at Ecbatan. See all of Rich’s articles here.

> I still think that the Hugo voters – even people, like me, who are pretty well
> connected – are not really competent to evaluate Long Form editing

I agree with you here, since it’s pretty darn tough as a reader to figure out how much a completed work reflects the input of the editor.

But now that the Long Form Editor category has existed for a few years, I think it’s helped bring a lot of attention and awareness to the top editors in the field. It’s helped readers realize that certain publishing lines have very real character and characteristics, and those arise directly from the editor. For that reason alone, I’m glad it exists.

You are right that the existence of the Long Form category has focussed additional attention on the work Long Form editors do, and has given some of them some well-deserved notice. And that’s a good thing.