Books, like music, can evoke images of another time and place. When I picked up The Edge of Tomorrow recently, it triggered memories of Manhattan, Kansas, just before my husband left for Vietnam. It was mid-June 1966 when I drove from California to Fort Riley.

Manhattan was a whole new world. I remember heat and humidity so heavy it was like walking around on the bottom of a warm fish bowl. But there were awesome times too — a Harry Belafonte concert, thunder so loud I thought it would flatten me, and staring out a window all night during a tornado watch.

Yet, my most vivid memories are about food and friends. It was still early days for the anti-war protests and we were not aware of them. Uppermost in our minds was knowing our husbands or fathers or sons or brothers would be going to Vietnam. With so much uncertainty in our lives, we made the best of the moments we had and meals were about the only time life seemed normal.

The troops at Fort Riley trained twelve to fourteen hours a day. That left evenings and some weekends for relaxation. When Bob was home, his Army friends often stopped by for a beer and a chat. Many times, they stayed for a home-cooked dinner. During the five months in Kansas, I prepared a lot of food. Mostly from family recipes. So did other wives. We tasted dishes we had only heard about and exchanged recipes. One of my favorite memories centers around a feast those of us from California put together. We craved Mexican food but tortillas, pinto beans and hot sauce weren’t available in the local stores then. That problem was solved when we wrote and asked our families to send supplies. They were generous beyond belief. All our friends were invited. For a few hours, while we were eating tacos, enchiladas, refried beans, rice, burritos, guacamole and hot sauce, we were home.

Food and friends filled our evenings and whatever weekends we had. Reading helped me cope with the long days and the stress of knowing Bob was going to Vietnam. We didn’t have much money so I haunted the library. Manhattan had a pretty good-sized one and it was air-conditioned. There were several historical books by Howard Fast, who was very popular at that time. I read them easily. Truthfully, I don’t remember the titles or the subject matter. At least not until I borrowed The Edge of Tomorrow. 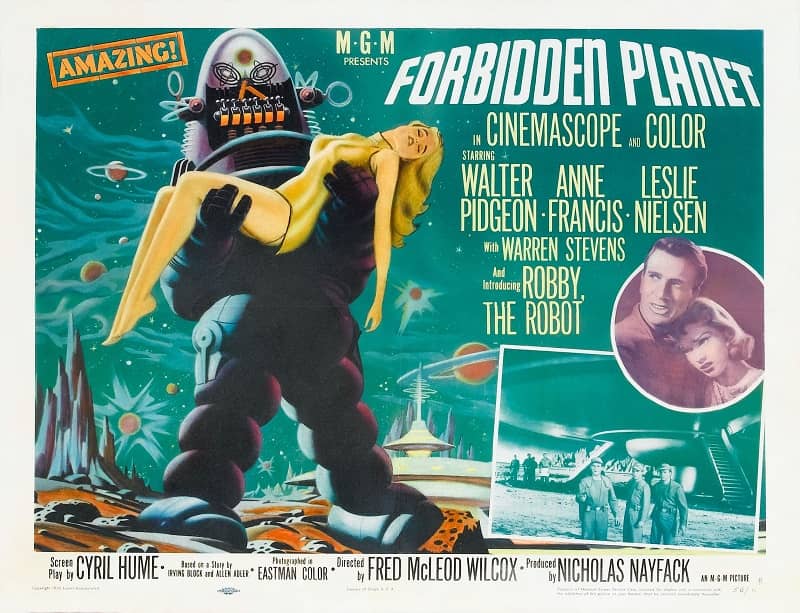 Although I had never read any science fiction and fantasy previously, I was familiar with it on TV and in the movies. In the 1950s, every evening we watched Flash Gordon, Tom Corbett Space Cadet, and my favorite, Space Patrol. Science fiction on the big screen was even better. At a young age I saw The Thing From Another World. I watched it five times because I was so scared I kept covering my eyes. The space ship in The Day the Earth Stood Still, along with the powerful robot, Gort, looked more real than anything in the TV sci-fi serials. Who doesn’t remember Klaatu barada nikto? But the movie that really fired my imagination was Forbidden Planet. On the big screen, Altair IV came alive with its green sky, desert-like landscape, and two moons. Who wouldn’t want a robot that manufactured everything from food and clothes to precious gems? The scientific accomplishments of the extinct Krell civilization were vividly shown in the sheer size of its subterranean world of precision machines. But, in addition to beauty and history, Altair IV had a dark side: an invisible monster. Was this nightmare creature the reason the Krell inexplicably disappeared in a single day and night? The wonderful electronic musical score by Bebe and Louis Barron heightened the suspense. It was unlike any sci-fi serial or movie I had ever seen.

As much as I enjoyed these movies and TV shows, it was still another ten years before I read The Edge of Tomorrow with its seven short but powerful stories. Fifty years later I still remember them.

“The First Men” was my favorite. It answers the question “Can man become man by himself or does he require the society of other men?” The story unfolds in letters between Harry Felton and his sister, Jean Arbalaid, a prominent anthropologist. Jean and her husband believed Man Plus has lived for thousands of years on this planet. They are determined to prove that if removed from the influence of human society, these superior beings will emerge.

Jean obtains military funding and builds a compound on eight thousand acres in Northern California. It is a top secret project and the army patrolled the perimeter. Forty gifted children of various ethnic groups between the ages of six and nine months are raised in an environment of truth, knowledge and love. How they acquire the staff and the children is revealed in the correspondence between Harry and his sister. Her final letter, after eighteen years in the isolated compound, describes the results of their experiment.

“The Large Ant” is a story of terror and lost opportunities. A man in an isolated cabin awakes to find a nineteen-inch ant standing on his bedpost. He kills it and takes it to the local museum where he is told eight more have been found and they are not of this world.

“Of Time and Cats” is a fun story about the duplication of a man who steps into a time deviator. The situation becomes complicated because all 78 duplicates want to live.

“Cato the Martian” is a member of the Martian Planetary Council. He was named after Cato the Censor, a Roman senator and historian who fought against the spread of the Greek culture in Rome. Cato the Martian acquired the nickname because of his motto, “Earth must be destroyed!” Mars and its people have been preoccupied with Earth culture for over forty years. Intercepting radio and then TV broadcasts, the Martians have learned many Earth languages and have grown to appreciate its art, architecture and music. What they don’t appreciate and cannot understand is the destructiveness and murder that takes place. Cato’s fear of being contaminated by this violence leads to a very foolish decision. But, not all Martians agree about the destruction of Earth. After hearing Cato’s motto, Mr. Erdig, a philosopher who is also a member of the Council, decides to change his focus from Latin to English. 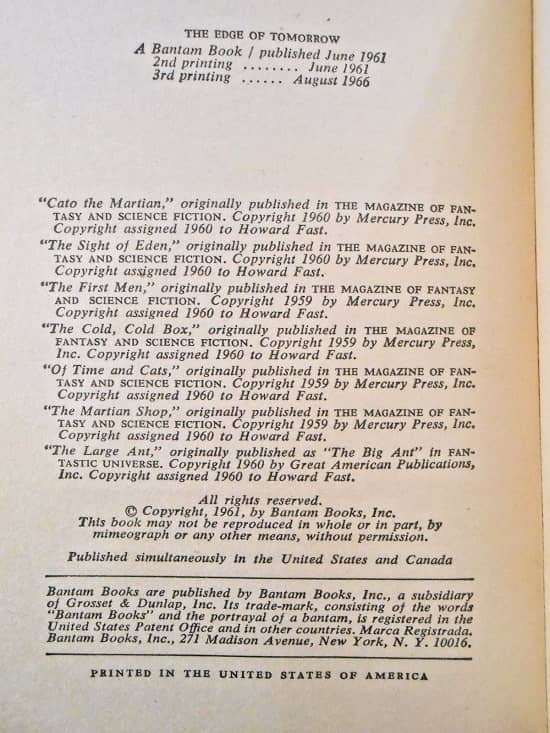 Copyright page for The Edge of Tomorrow (1961)

“The Cold, Cold Box” offers an ethical dilemma. Annually for 62 years the Board of Directors of a powerful, international holding company violates its legal duty. In fact, every year the three hundred members debate the question of whether the end can ever justify the means.

“The Martian Shop” tells of three stores that open simultaneously in the most exclusive shopping areas of New York, Paris, and Tokyo. All are sumptuously furnished. The name “Martian Products” appears on the outside of each building in five inch solid gold letters. Inside, hanging from the lobby ceiling, is a crystal replica of Mars, synchronized with the movements of the planet itself.

The stores exhibit and take orders for only four products: a clock whose materials, precision and beauty are unknown on earth; an adding machine in a black cube with unearthlike capabilities; and a small, atomic, 40 horsepower motor that weighs 14 pounds and can operate continuously for a thousand hours. Finally there is a music box of incredibly high fidelity that plays over eleven thousand pieces in twenty-two categories. No deposits or prepayments are taken.

The three shops open on Monday and close five days later on Friday. All personnel along with the products, disappear without a trace. In the New York shop, a fragment of writing in an unknown language is found. It is eventually partially translated but does the translation give the whole story?

In “The Sight of Eden” a crew of seven, three women and four men, have traveled through space for over five years. During that time “all the words had been said; all the reactions had been tested; all the tears had been wept.” Below them now is a planet “bathed in sunshine, washed with air and laced with rivers, lakes and lagoons.” It’s the perfect place to establish another earth colony. For two days they explore and find no one. On the third day, a man appears and suddenly Earth is closer than they thought possible.

When I finished the last story, I reread the book several times and returned it to the library reluctantly. I wanted a copy of my own. Searching through new and used bookstores, I finally found one. It was buried among the many stacks of reading material at Twice Read Books on San Fernando Street in San Jose.

This first sci-fi book led to another and soon I was reading everything I could find by authors such as Robert Heinlein, Arthur C. Clarke, Isaac Asimov, Ray Bradbury, Frank Herbert, and many others. But discovering another library section I could browse in wasn’t the only impact on my life.

The Edge of Tomorrow came to me at just the right time. The seven stories told tales of ordinary people whose inventions and ideas belonged in the future. While we were at Fort Riley, there was no talk about the future. We lived from day to day, enjoying whatever moments we had. In a way, we were living on the edge of a tomorrow we didn’t dare plan for.

Barbara Barrett’s last article for us was a review of Cast a Deadly Spell.

I can think someone who fond of chainsaws and boomsticks.

Barbara, if you don’t get that joke, I’ll explain it to you. 🙂

Thanks for the review, Barbara! I’ll definitely be getting a copy of this – I read another Fast SF collection (“A Touch of Infinity’) as a teenager and had the same experience as you – ie, the stories stuck in my mind for years afterward. JON has just bought a copy, so maybe he can lend you his?

This sounds like a great set of stories, I’ll have to get my hands on it!