Philip Lovecraft (Fred Ward) is a hardboiled Los Angeles private eye who is hired by Amos Hackshaw (David Warner) to find the Necronomicon, a book which contains the knowledge to destroy the world when the stars line up at midnight in two days. It was stolen from Hackshaw by his ex-chauffer, Larry Willis (Lee Tergesen).

The Necronomicon in Cast a Deadly Spell

Willis was fired by Hackshaw for getting too close to his 16 year old daughter, Olivia Hackshaw (Alexandra Powers). We learn early in the movie that Olivia has killed a unicorn. Until she steals away to follow Lovecraft in his investigation, she has been kept close to home. 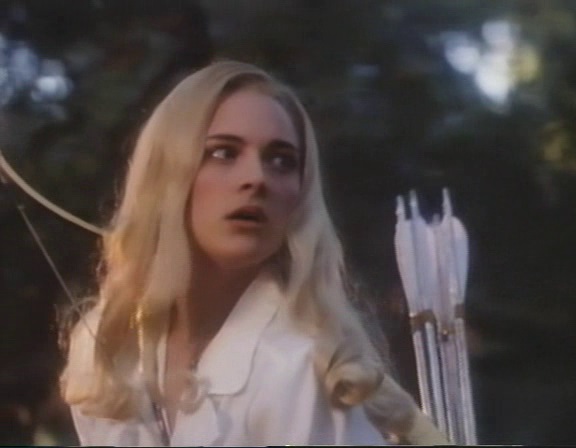 Phil’s rates are $40 an hour and he receives a $100 advance. With very little to go on, he follows the trail of the book. His path is crossed by runes summoning killer demons, gargoyles that track people, zombies who are not only muscle for mobsters but who build houses, as well as the usual gremlins, werewolves and vampires. One clue leads him to the Dunwich Room, a nightclub run by a local hood, Harry Bordon (Clancy Brown), Phil’s ex-partner when they were policemen. Bordon’s girlfriend, singer Connie Stone (Julianne Moore) is Phil’s ex-girl and the attraction between them is still there. 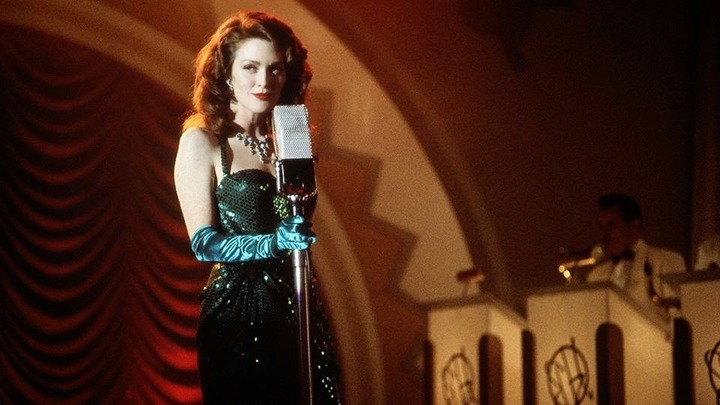 Hypolite Kropotin plays Phil’s colorful landlady. She runs a dance studio across from his office and part of the $100 advance from Hackshaw goes to her for the back payment of rent. She is leaving Los Angeles and warns him “there is a darkness growing.” Over his protestations, she locks a magic bracelet on him for protection. 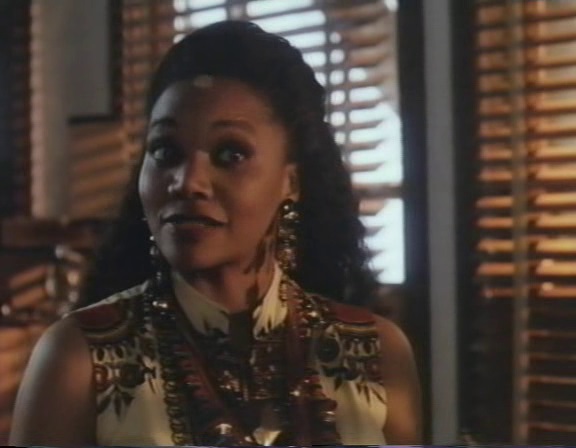 Of course the book is finally located and the stage is set to bring forth the Great Old Ones. All the main characters including the customary virgin sacrifice, are present as Amos Hackshaw begins reciting from the Necronomicon, calling on Yog Sothoth and Azathoth. Doesn’t take much to figure out his vision will not go as planned.

The movie is filled with references to H. P. Lovecraft and also mentions other science fiction and fantasy writers. For instance, the police captain is Detective Morris Bradbury. Catching all these adds to the fun of watching Cast a Deadly Spell.

Fred Ward is a believable 1940’s private eye. All the supporting cast in the film are good and I would bet that riding around in those vintage cars was one of the perks of working on this movie. The budget was only six million dollars. However, the production values are good. The whole mood and ambience of the 40’s are there. What we see of the cover and inside artwork of the Necronomicon are very impressive. While the snappy dialog is reminiscent of a hardboiled private eye film noir, the words of the ritual are straight out of H. P. Lovecraft.

IMdB viewers rate the movie at 6.7 out of 10. The most detailed review as well as a great piece of artwork comes from Chris Jordan on the website Spoiler Free Movie Sleuth.

When I recently wrote my Un-Unfilmable article about film adaptations of H. P. Lovecraft, there was one movie that I really, really wanted to rave about, but it just didn’t fit into the theme. Not an adaptation of Lovecraft, but a crazy, snarky, genre-mash-up homage, this film is a hugely entertaining and original should-be-cult-classic from the late-’80s/early-’90s era that produced a whole lot of cult classics…but aside from serious cult film …. I would guess that most people haven’t even heard of it…

“The film is set in a sort of parallel-universe 1940s Hollywood in which everyone uses magic, for things as simple as lighting cigarettes with fire from their fingertips, or as nasty as mob hits done with voodoo dolls. Gangsters have zombie bodyguards, the cops find themselves arresting werewolves every full moon, and everybody in the city’s criminal underworld seems to be after a stolen book called the Necronomicon. Which is exactly why hard-boiled private eye Philip Lovecraft (Fred Ward) is determined to find the book first. 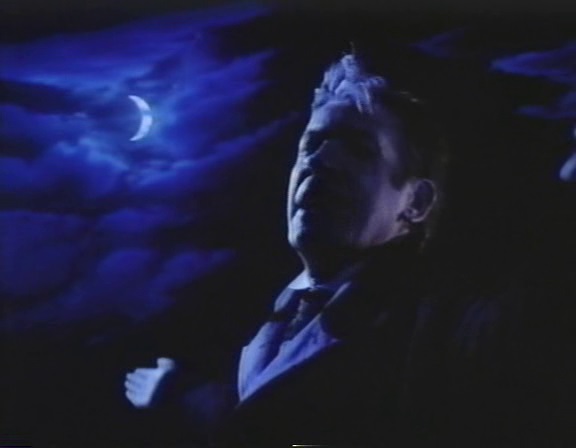 What is most impressive about Cast a Deadly Spell is how well-developed its world feels: the script works magic into the everyday activities of Hollywood life in such casual, matter-of-fact ways that from the very first scene you immediately buy into its reality. The key to this is that magic isn’t portrayed as some wonderful, fantastical thing in the film’s world; it has been there for long enough that everyone takes it for granted and primarily uses it for easy shortcuts, the way we think of wi-fi or delivery food. Like any good private eye, Phil Lovecraft just rolls his eyes and treats it all with a jaded cynicism. The other key aspect of the movie’s world is the film-noir atmosphere, which is crafted perfectly. Deep shadows, moody period sets filled with cigarette smoke, stylized color-tinted lighting that accentuates the pulp-magazine art design… it hits all the right visual notes, with just the cool attitude it needs.

“The supernatural elements of the story are written equally well, with just as much familiarity with the material from which they originate. While there are tropes from all over classic horror cinema and literature, that aspect of the film is first and foremost an homage to H. P. Lovecraft, and a very knowledgeable one at that. There are loads of references to his stories, and a whole lot is directly pulled from his mythology, right down to the language used in the Necronomicon‘s passages related to the Great Old Ones. In a script that clearly takes itself with a grain of salt, the Cthulhu Mythos elements are what give the story dramatic weight as horror.

Jordan points out in his 2010 review that Cast a Deadly Spell is not available on DVD. I checked on Amazon and it still has not been released in that format. However, Amazon shows VHS tapes for sale at about $36 each although there are several VHS copies available cheaper on eBay.  The really good news is it’s currently showing on Amazon Prime and it’s free for members.

In Cast a Deadly Spell everyone uses magic except private eye Phil Lovecraft. How he accomplishes this in a world of monsters and mayhem, makes a highly entertaining and fun film.

Barbara Barrett’s last article for us was The Paranormal on British TV: The BBC’s The Ωmega Factor.

I remember seeing “bits and pieces” of this back in the day…perhaps on cable? My recollection is definitely positive. What a great cast!

Thanks for the update,
Anthony

I remember this one fondly. I didn’t expect much from an HBO original movie back then, but this one was amazingly inventive. Looking back at the magical noir setting and the grab bag of magical traditions, I have to wonder if it had any influence on the emerging Urban Fantasy genre.

I’m pretty sure I saw this back in the day, but I thought it was a fever dream.

I may have to dig up a copy, because as stated above, it could be an early example of Urban Fantasy.

I didn’t have HBO when this movie came out so I didn’t see it until a few weeks ago on Amazon Prime. It’s free for members and John O’Neill has provided a link toward the end of the article. If you a member you can see it there. I hope HBO puts it out on DVD at some point….

The comments about an early example of Urban Fantasy could be dead on, I’m a big Jim Butcher fan and I remember thinking Phil Lovecraft, the only Los Angeles detective who doesn’t use magic is a direct contrast to Harry Dresden, Chicago’s only private detective who is a wizard.
Barbara

I watched this movie last night after reading this review, and found it quite amusing. It’s played straight all the way. And the Lovecraftian monster at the end isn’t half bad.

I loved both of these but haven’t seen either in decades. Nice to hear folks still like ’em. I’ll have to track them down

Just watched it on Amazon. Pretty amusing! I got to say that I love everything I see Fred Ward in. He was also in Tremors and Timerider, two great 80s flicks (though Tremors technically came out in 1990).

I was in college when this came out on HBO. I didn’t have HBO, but somehow I was in the loop about this. Wrangled some friends who had HBO (and who knew next to nothing about HPL) into watching it. It was a blast!

I think I rented it once (VHS!) in the late 90s. Watched it again this year on YouTube with some friends– it has aged quite well, and was still uproariously funny.

I agree with James McGlothlin: Fred Ward is pretty much great in everything he’s in.

I got to say that I love everything I see Fred Ward in.

James, if you haven’t seen it, I strongly recommend you track down Remo Williams: The Adventure Begins.

I watched this again over the weekend. I’m still not convinced I didn’t dream it.

Also, I do love Fred Ward. I could have been Harrison Ford, but he became Fred Ward.

Adrian, thanks for the heads up on the YouTube film. I watched several minutes of it. I think the Amazon prime film is clearer but for those that don’t belong to Amazon prime, it can still be seen on YouTube.

I believe both of them have close captioning. I turned the CC on so I could FINALLY hear what Phil Lovecraft says when he walks down the alley after Grimoldi lights his own cigarette with his finger.

I can easily understand the Fred Ward recommendations. He’s a wonderful character actor and I hope he sees the comments here and knows how popular he is. I re-watched “Tremors” and found “Remo Williams” on YouTube. The quality of Remo was poor but as usual, Fred Ward is superb.