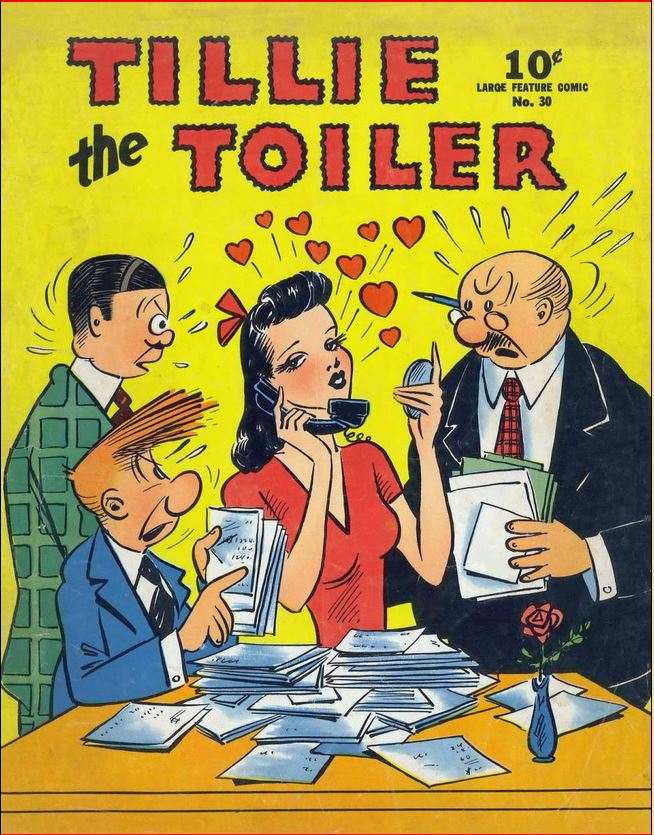 Only a handful of comic strips ever ran a major series starring robots, and those were mostly in the male-oriented science fiction strips. Two rare exceptions occurred in Invisible Scarlet O’Neil and Ella Cinders, but both robots were drawn and referred to as males. (How do you sex a robot? The top set of swimmerets on a female’s tail are soft, translucent, and crossed at the tips. A male’s swimmerets are bony, opaque, and point up toward his body. Sorry. That’s how you sex a lobster. You sex robots by the length of their hair and the size of their breasts, just like humans. Check below if you don’t believe me.) Finding a strip with a female star going up against a female robot is the rarity of rarities.

Today’s unique find is Rosie the Robot in Tillie the Toiler. (Not the far more famous Jetson’s Rosie. Rosie is to girl robots what Robbie is to boy robots: hideously overused.) 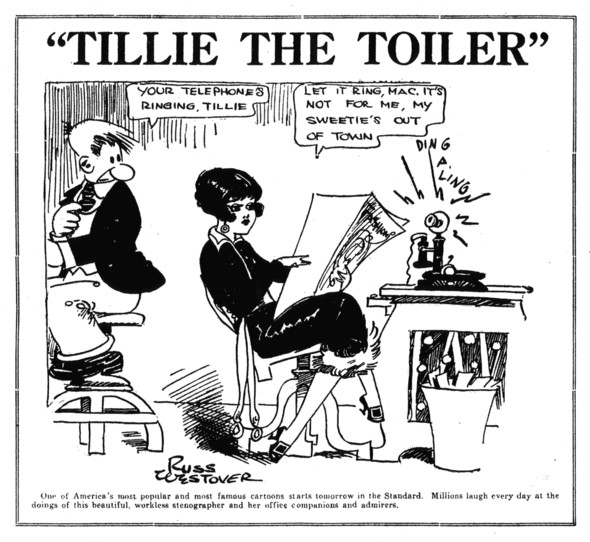 Comic strips foreshadowed the workings of comic books. As soon as one genre or character or notion succeeded others would rush in to cash in on its success. Even the tiniest hamlet had a weekly newspaper, places with two or more crossroads boasted a daily paper, every sizable city had two in furious competition, the largest cities might have a dozen. With a few conspicuous exceptions (The New York Times and The Wall Street Journal), every one of those thousands of geographical locations needed comic strips by the handful. Few even of the most famous ran in more than 500 papers: a trip to a new city often meant seeing a page of utterly unfamiliar strips. Sunday papers ran separate, full-color comic sections featuring some Sunday versions of daily strips and some strips that ran only on Sundays. These strips, reaching tens of millions of households in an era when virtually nothing else appeared in full color, were kings of popular culture, the most popular and most-read sections of newspapers, beloved by all ages. Selling a comic strip was the dream of most young artists, a goal reachable by all who had a fertile brain full of gags, at least half-decent talent, and the willingness to toil long hours over a drafting board.

Russ Westover fit the archetype. Other than a couple of early jobs he spent his entire life (1886-1966) drawing, first on the wrapping of parcels in his father’s store and eventually as a magazine illustrator and comic artist. As with virtually all others of that description, he wrote and drew a number of comics like Snapshot Bill, Ginger Pop, Fat Chance, Looie and His Tin Lizzie, and The Demon Demonstrator until one finally clicked.

The era immediately following WWI is rightly known as the period of womean’s emancipation, so naturally a string of working girl strips met the apparent need. Somebody’s Stenog by Alfred Hayward led the way in 1918, followed by Wood Cowan’s Miss Information in 1919, and the big breakthrough in 1920 of Winnie Winkle the Breadwinner by Martin Branner. Winnie took off immediately, landing in over 100 papers, spawning a series of movie shorts in 1926, and earning a comic book with her name on the title.

There’s little doubt that Winnie was the inspiration for Tillie, who debuted just three months later on January 3, 1921. Both started out as daily gag strips and evolved into months-long continuing storylines but the resemblance stops there. Winnie was efficient, wholesome, and the support of her ever-extending family. Tillie was one of the worse people not explicitly a villain ever to head a comic strip. She was lazy, bad at her job, and sufficiently narcissistic and self-entered to earn a DSM label. A 1925 promo ad for the strip roasts her royally.

Haters probably felt she satirized the jazz age flapper; admirers loved her insouciance. She soared over Winnie, eventually landing in over 600 newspapers, a major hit. Marion Davis starred as Tillie in a full-length 1927 movie and Kay Francis repeated the role in 1941, both movies titled Tillie the Toiler.

Tillie’s victory over Winnie got a great boost from her look. The archetypal flapper girl, she spent all of her free time shopping and primping, allowing Westover to model her in a dazzling array of contemporary fashions, a new look every day. He also leveraged a gimmick common to Sunday strips by making it interactive. Few so-called full page strips were actually full-page (that made them harder to adapt in tabloids and papers trying to squeeze in extra titles.) To complete the page, Westover added a “topper,” a shorter strip that ran at the top of the page and left a corner open for Tillie’s paper doll outfits. 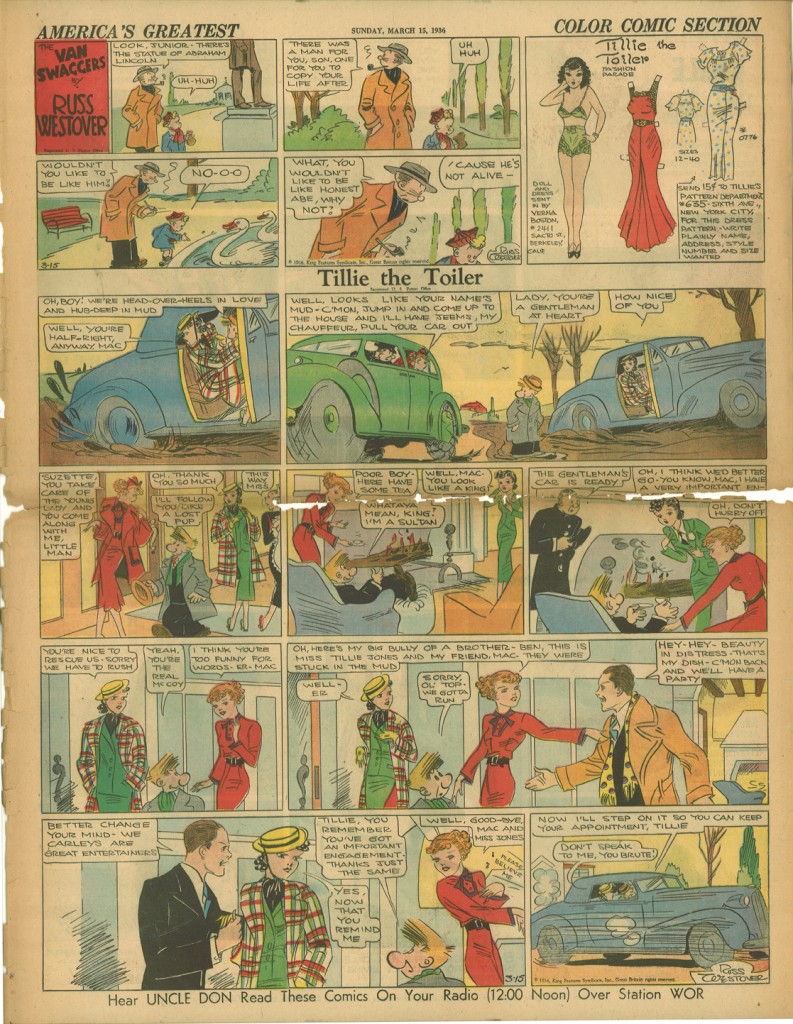 Drawn at first by Westover, the outfit soon became a magnet for girls (and presumably grown women) to send in their own designs. Not only did readers delight in seeing their names in print, but the cheesecake poses and skimpy underwear on the cut-out dolls added a frisson of cheesecake to the otherwise purely wholesome comic pages.

Tillie got featured in a Big Little Book and several comic books. The one at top shows her full crew: from left to right, Wally Whipple, the office manager; Clarence “Mac” MacDougall, hopelessly in thrall to her, and the boss, J. P. Simpkins. (Simpkins’ business is sometimes hard to fathom, but it’s connected to the fashion world and Tillie acts as a stenographer or sometime model.) Of course the office men are huddled around the oblivious Tillie, who is shirking work to talk to one of thousands of would-be beaus, all of them far handsomer and several feet taller than Mac.

The episode with Rosie the Robot would show a cornucopia of Tillie’s faults. (I’d say it depicts her at her worst, but she had bottomless depths.) It starts on June 19, 1933 and continued daily (not Sundays) through November 4, 1933, with an abrupt and fantastical end.

Tillie is off on a month’s vacation in a seaside hotel, completely normal behavior for a stenographer at the low point of the Depression. Mac follows. “I’ve got to get the perfect stenographer if I have to make one,” he says. He bumps into her, literally.

Tillie loves Mac’s loyal adulation, the way he sacrifices himself for her, and the lovely marks he makes on the soles of her shoes as she walks all over him. Although she spends most of her time at the hotel flirting with various admirers, she can’t bear to think that Mac might have a girl of his own. Mac does, in a way, and on July 3rd we meet Rosie, although the July 4th strip makes for a better introduction.

Mac installs Rosie in the office, where he explains her operation to a noisy reporter.

Simpkins writes Tillie that everything is fine at the office and she can enjoy her vacation, which, in any cartoon, movie, or sitcom, is sufficient motive for the recipient to drop everything and speed home. Tillie is justified for once. Rosie does her job far better than Tillie ever could. Nevertheless, on July 20-22nd, they stage a contest for the job. 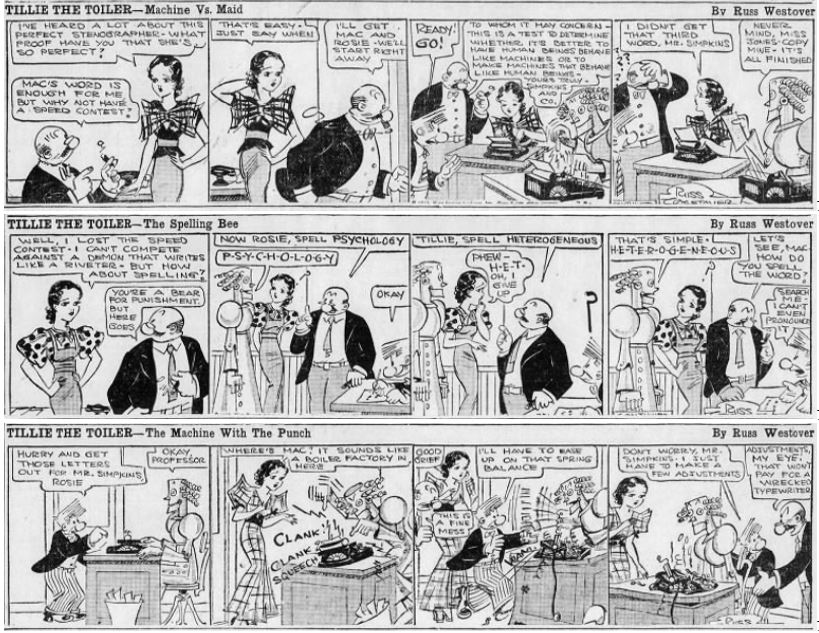 For no reason other than she’s the star of the strip, Tillie returns to work as if nothing had happened. By comic strip standards nothing had. In August all hell breaks loose. Rosie slips a cog or something so Mac takes her apart. Fixing her is simplicity but somehow her governor got left out. Rosie goes off on a tear through the city, wreaking havoc everywhere. A handsome crack detective offers to find Rosie: he has, after all, located the missing link and the lost chord. Who could turn down qualifications like that? Subduing the super-strong Rosie might be a problem for some, but Mac has the answer, in an unprecedented bit of continuity.

The detective doesn’t find Rosie, she finds him – dancing with Tillie. Finding her and keeping her prove to be different sides of the coin. 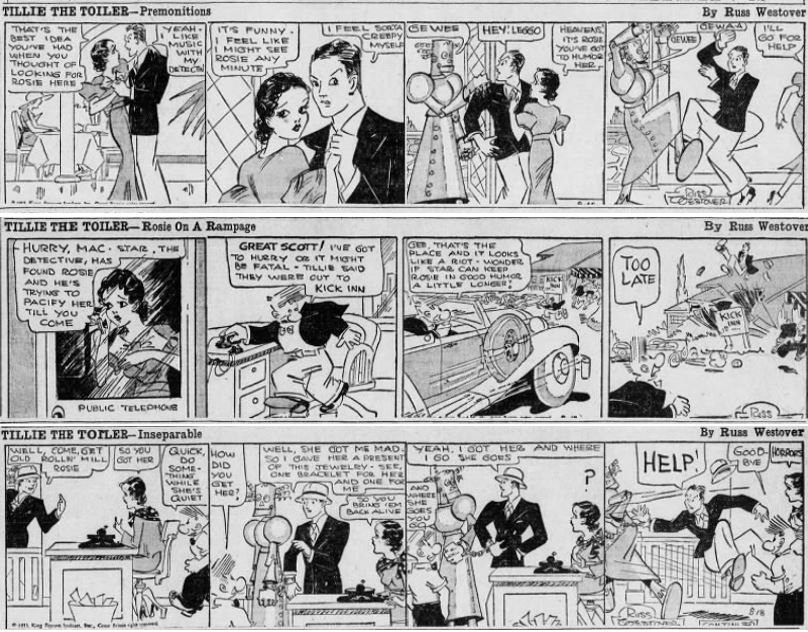 Simpkins has had it with Rosie’s antics but perks up when he receives a letter from “Prof. Stymedoo, the Electric Wizard” wanting to see Rosie. (The name is probably a pun on General Electric’s head engineer, Charles Steinmetz.) Mac makes sure to get Rosie into top shape. 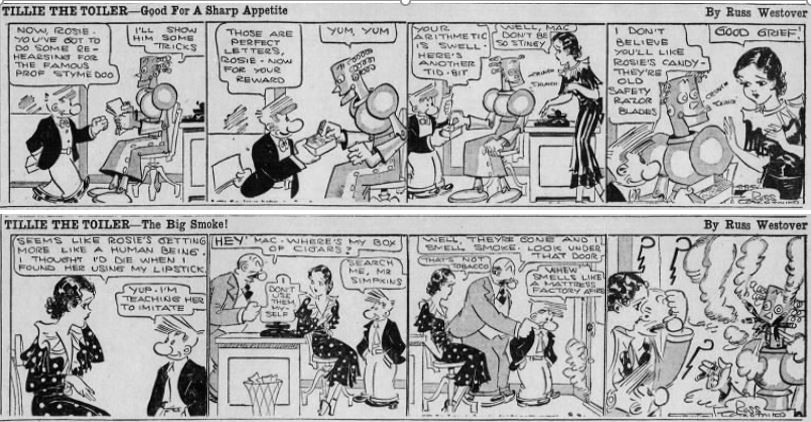 She’s even better than that. Mac gimmicks her so that she can read minds. Assuming the mind isn’t full of blank pages.

The professor is even handsomer than the detective, entrancing Tillie if not Rosie. He dawdles, dating Tillie while putting Rosie through endless tests.

He doesn’t know that Rosie’s now a mindreader.

The professor finally figures out his best course of action. Don’t decide: take both. He sensibly wants Tillie for her beauty and Rosie for her utility. Stymedoo offers $5000 for Rosie but Mac won’t sell and Rosie is in love with her maker and won’t leave. The professor jilts them all. He tricks Rosie into giving him her plans so he can make a perfect stenographer himself. Mac goes down the rabbithole.

Mac heads for a confrontation with Stymedoo when he gets the shock of his life, Mattie O’Matick.

There can be only one outcome. Unlike in last column’s The Monster and the Ape, the battle we all want to see actually takes place, though discreetly offpanel. 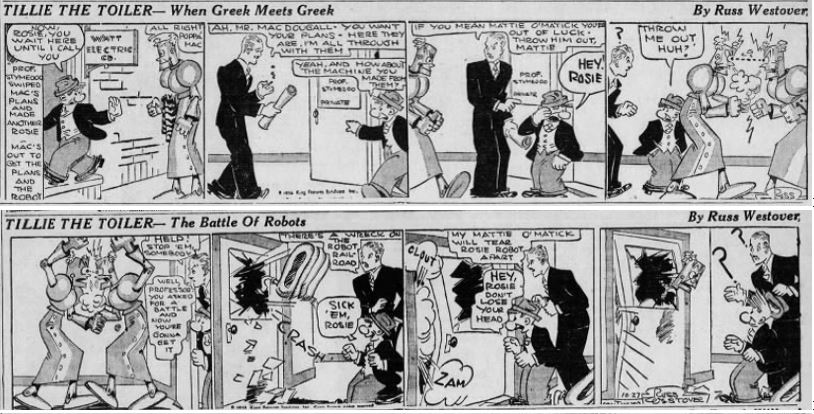 Rosie wins, of course. But after 22 weeks of this nonsense, Westover’s run out of robot gags. The 23rd and final week begins on a serious note and then jumps to a world class deus ex machina. 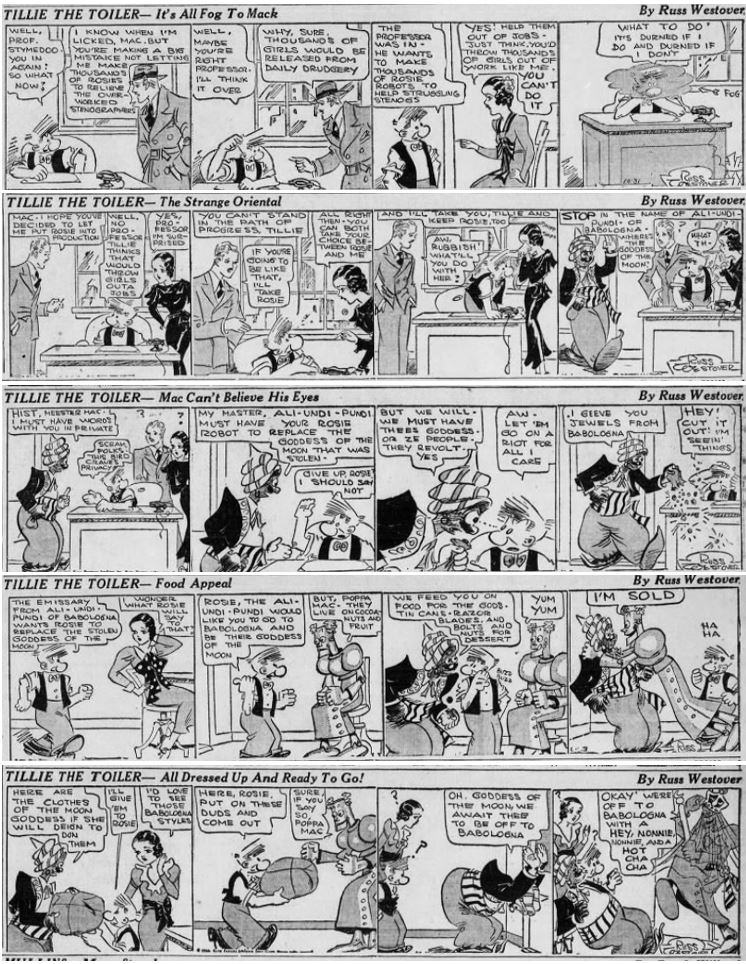 It’s hard to blame Westover. All though the 1930s the world seemed to cry out for robots to alleviate the endless toil of the working class while simultaneously realizing that jobs were already impossible to find for a quarter of the workforce. And you thought that Rosie vs. Mattie was a case of an irresistible force encountering an immovable object. The intractability of the dilemma and the moral force of each side has often dismayed better men than Westover. No wonder he threw the entire cursed argument out the window at the first opportunity.

Rosie’s appearance generated an unusual amount of commentary, at least in the letters to the editor columns of newspapers that ran it. This one from the August 29, 1933 [Madison] Wisconsin State Journal neatly, if inadvertently, sums up the entirety of the middle class view of household servants. 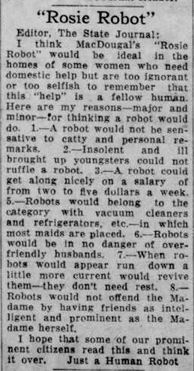 And this one from the September 9, 1933 Tampa Tribune does much the same for government workers. 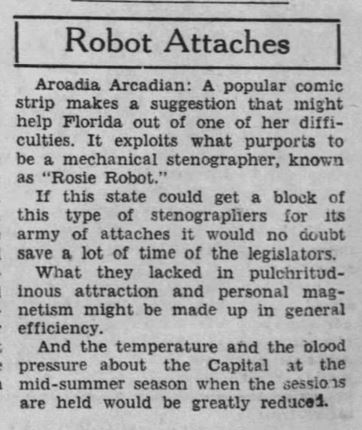 Tillie the Toiler would last another quarter century, with Westover’s successor marrying Mac and Tillie in the final strip. Winnie Winkle would have the last laugh. That strip lasted, incredibly, until 1996. Neither strip left many marks in the history of women’s achievements. I like Rosie, nevertheless. She’s one of the greatest characters I encountered in my history of robots.

Steve Carper writes for The Digest Enthusiast; his story “Pity the Poor Dybbuk” appeared in Black Gate 2. His website is flyingcarsandfoodpills.com. His last article for us was The Monster and the Ape. His epic history of robots, Robots in American Popular Culture, is scheduled for a Summer release.