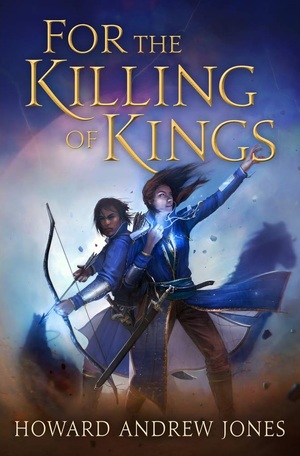 Kyrkenall, veteran of the great war that almost destroyed the realm of Darassus, and Elenai, a young squire, both members of the Altenerai, an elite corps of warriors, find themselves on the run from their comrades in Howard Andrew Jones’ rapid-fire new book, For the Killing of Kings. At an almost brief 350 pages, it moves at an astounding pace, each chapter ratcheting up the suspense and the danger until everything seems ready to spin out of control. This is exciting storytelling from one of the best and most knowledgeable writers of heroic fantasy around. If you haven’t yet read Jones, this is an awesome place to start.

A little less than a decade before the book begins, the barbarian Naor almost conquered Darassus. In the end, the Naor were driven to near collapse by the Altenerai under the leadership of N’lahr. Following their massive battlefield defeat, the queen of Darassus, against the advice of the Altenerai, offered the barbarians peace. They accepted and withdrew to their ancestral lands. As the book begins, though, it seems the barbarians are on the move, threatening to bring fire and death once more to Darassus.

During the war a prophecy had been made that Mazakan, warlord of the Naor barbarians, would die at the hand of N’lahr by his sword, Irion. Though Mazakan surivived and N’lahr died, Irion hangs in the Altenerai’s hall and has remained a totem strong enough to deter the Naor from a full invasion. Until now.

Elenai and her superior, Asrahn, are responsible for the keeping of the sword. Shortly before the anniversary celebrations of the war’s end, they realize the real Irion has been replaced with a forgery. Within a short time there is a murder and Kyrkenall, taking it upon himself to investigate the crime, finds himself framed for it instead. His subsequent actions, which leave several people dead, force Elenai to join him in flight from Darassus. In order to clear both their names they will have to investigate a conspiracy that seems to rise to the top of the Altenerai and to the queen of Darassus herself.

Despite the novel’s large cast, it is Elenai who is the main focus of the book. Being suddenly thrust into events that she neither understands nor feels ready to face, she must find the courage and resources to do both. She’s also the point-of-view character, struggling to solve life-and-death mysteries as the reader follows along. Kyrkenall is too close-mouthed to allow Elenai, let alone the reader, in on everything. Her evolution, from unsuspecting victim of a frame job to hero-in-training, is compelling, and I want to know where’s she’s going.

Cargen scowled at him, then at her. “You shouldn’t have come, girl. Disappearing Kyrkenall is easy. Explaining you is another matter.”

She saw what happened from the corner of her eye. An object sprouted suddenly from the exalt’s mouth with an explosion of red and white she realized were teeth and blood. The mage’s presence in her mind fell away as he dropped, choking, clawing at the black-feathered shaft that transfixed his face. Elenai was too shocked to understand exactly what she was seeing until Cargen drew his blade and shouted a warning: “Kyrkenall’s here!”

Elenai stepped back and pulled her own sword. She meant only to defend herself, but as Cargen closed she realized he’d seen it as a challenge.

“You’re no match for me,” he promised.

“You might be wrong.” She was surprised by the sound of her own bravado. 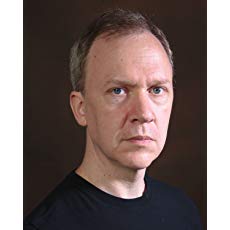 She’s not the sole young Altenerai in For the Killing of Kings. Back in Darassus Rylin, along with Varama, another hero from the war, reject the claim that Kyrkenall and Elenai are killers. They sense something’s not right and begin their own secret investigation. For their efforts they, too, find themselves on the run pursued by old comrades intent on their death. At one point they realize they’re running from one danger straight toward an even greater one.

Alternating between Elenai’s and Rylin’s storylines, the book’s two main strands come together in fury and fire with a real gut-punch of a conclusion. I’m not a particular fan of cliffhangers in ongoing series because I hate having to wait to find out what happens next. Fortunately, I was very happy to learn Jones is putting the finishing touches on the next book right now. That’s all I’ll say about the plot, other than that it’s tightly constructed and packs some revelations that actually surprised this long-time reader of fantasy.

Jones’s prose is skillful and clean. He’s equally adept at creating intimate moments of loss and longing as he is big moments of battle and disaster. And while he doesn’t hold your hand, he never lets you lose sight of what’s going on. Navigating the inherent confusion of a mystery, Jones keeps his reader oriented in the story’s space and time. His writing lifts his characters above their stock descriptions (the tired veteran, the anxious young soldier, etc.) and imbues them with enough distinction and life to make you worry about their fates. Plus, Elenai and Kyrkenall are pretty danged cool.

For the Killing of Kings moves flawlessly from one scene to the next, eschewing the morass of chapter after chapter of overly padded worldbuilding or side plots that amount to nothing. A tangible fictional world can be created without tons of description. There’s just enough in For the Killing of Kings that there’s a clear sense of geography and culture while not distracting from the narrative. Another plus is that without seeming totally alien, Jones’s world is not just another medieval Euro-clone.

By story’s end, the land and its people have started to take form but mysteries still remain for the upcoming books. The world itself is riven by magic, with some regions often cut off from one another by the Shifting Lands, places that drift in and out of sync with the physical world. Exactly what they are is one of the book’s several mysteries:

Elenai had never been there but knew The Fragments was one of the most fragile of realms because, rather than being completely solid like the other four great land masses, it was actually a series of closely linked splinters and islands through which tiny rivulets of the Shifting Lands were threaded, ranging in width from a handful of miles to only a few hundred feet. People and even animals freely roamed the gaps, which resembled the surrounding terrain except during the fiercest storms. Owing to those gaps, strange things, both terrible and wondrous, could spring up even deep in the middle of the realm.

Magic in Darassus is a dangerous and mystifying force with uncertain potential and effects, not the readily quantifiable systems of games and much writing common to modern fantasy. Enigmatic artifacts called hearthstones increase sorcerers’ power, but threaten their hold on reality. The point of fantasy is to be fantastic, and when magic is just a replacement for science in pre-industrial society, I’m left a bit bored.

Mechanical magic is one of the reasons I don’t read a lot of modern heroic or epic fantasy novels. There’s also the bulking up with endless world-building as well as wordy and supposedly deep characterization. Heroic fantasy should be exciting and fast-paced. Characters’ depths should be revealed through their actions. The story should proclaim heroism and sacrifice, virtues dismissed as false by a large number of modern fantasists. It should echo the poetry of the bards and griots and not just the cynics. It won’t save your life, but if you, like I, don’t have much faith in new fantasy, For the Killing of Kings is proof that great, modern heroic fantasy is being written.

Like Doc Smith’s Lensmen or DC Comics’ Green Lantern Corps, the Altenerai are an elite band of warriors endued with magical talents and dedicated to protecting the land and ensuring justice. If their oath, quoted above, doesn’t grab you, then maybe this book filled with heroes — not anti-heroes, not tortured, self-doubting heroes, but actual heroes — isn’t for you. That would be a shame, though, because then you’d miss out on a gripping work of heroic fantasy. Heroes are a too often forgotten commodity in fantasy these days, but not here, in For the Killing of Kings.

Fletcher Vredenburgh is generally on hiatus here at Black Gate, but will stop by occasionally. He’ll still be posting at his own site, Stuff I Like when his muse hits him. Right now, he’s writing about all sorts of different things.

Great review! Sounds like this is a winner. Nice to see real HEROES in action, now n’ then.

Apologies for not reading all of your article, Fletcher, but I did not want any spoilers at all. This is on the way right now from Amazon.

Stoked to read this, as Howard is the best in the field right now.

@MFB – I totally get it. The book’s definitely a blast.

Had a great time reading it, and I’m looking forward to the next.