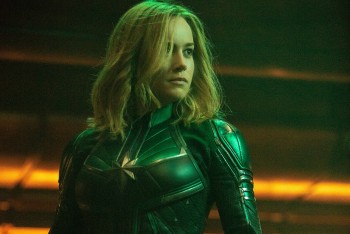 I just came back from watching Captain Marvel with my 14-year old son. He was super excited to see it. He hasn’t yet maxed out on superhero movies like his dad. That being said, I was also pretty hyped to see it, in part because Captain Marvel was one of the comics I first started collecting when I was eleven and twelve years old. Back then, I was reading the Mar-Vell version, but I also picked up some Claremont/Cockrum Ms. Marvel because of Captain Marvel and because Carol Danvers was a regular in the Uncanny X-Men at the time. 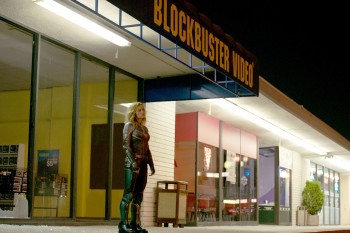 In the March, 2019 Marvel Cinematic Universe movie, Brie Larson plays the version of Captain Marvel based on the comic work of Kelly Sue DeConnick and Dexter Soy, which DeConnick pitches as “Carol Danvers as Chuck Yeager.”

The movie really works. The TL;DR version of this review is that I would put this in my top five Marvel movies. Captain Marvel had space opera adventure, plots within plots, old friends seen young (Nick Fury and Agent Coulson), two kinds of aliens, some laughs, an amazing soundtrack from 1995 and Blockbuster video.

And when I say plots within plots, I mean it — there were several reversals I never saw coming that flipped the movie on its head for me. The choice of placing the movie in 1995 (presumably 13 years before Iron Man) is a fun visual, musical and plot choice, with ironic gags around Fury’s advanced pager. 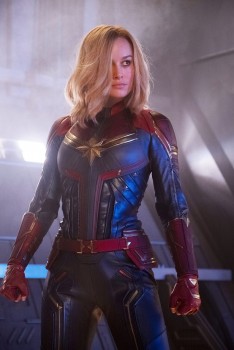 I also came to this movie, ironically, against the backdrop of some mouth-breathing misogyny flaring up from the ComicsGate side of the internet, supported by a bunch of puppet twitter accounts. I say ironically because the trolls losing their shit over the movie got Captain Marvel a lot of free press.

The Marvel Cinematic Universe’s 21st movie is not that newsworthy on its own. It is newsworthy though that a tiny troll army started review bombing the movie before it came out and forced Rotten Tomatoes to alter its policies. So media outlets that might have given Captain Marvel a couple of column-inches on page twelve suddenly put the movie on page one of their entertainment section, all to the benefit of the movie. Long live irony!

I had a lot of superhero fun tonight. My teenage son (and Marvel Cinematic Universe fan) loved it. Misogynists hated it even before they saw it. What more is left to say than go treat yourself to some popcorn!

Derek Künsken writes science fiction and fantasy from Gatineau, Québec. His first novel, The Quantum Magician, a science fiction heist, was long-listed for the British Science Fiction Association Award and made the Locus Recommended Reading List. Derek tweets from @derekkunsken.

And another comment. This, of course, has nothing at all to do with you or your review, but I’m beginning to wonder what we mean by “mouth breather.” I think I first heard the (derogatory) term about ten years ago, first voiced by a woman who is about ten years younger than I am. My first reaction was confusion, then (with dawning understanding), “ah, that’s kind of funny and true.” But now, hearing it so much as (what? White? Misogynist? Overweight and unattractive?) shorthand for a certain kind of person, I’m wondering, and I’m sort of self-conscious if ever I get a stuffy nose.

I had a similar experience first coming across the acronym SJW. I looked it up online and experienced no small amount of cognitive dissonance as I misunderstood for some time an author referring to social justice and those who advocate for it as a “bad thing.” Now that I can recognize it as shorthand, perhaps a certain worldview’s corollary for “mouth breather,” my mind dismisses anything the user might have to say. Such shorthand, I believe, resists any “points” anyone might possibly have, instead derogatorily characterizing an entire perspective (no matter how fair such a characterization might prove to be).

I’m a big fan of the cosmic side of Marvel. I read a chunk of the 60s era issues last year. I was pretty excited for this movie even though I’ve only read 8 issues with Carol as Captain Marvel.

It started out slow but it builds to something more. Samuel L. Jackson makes every movie better and he doesn’t disappoint here.

If I were to rank all of the movies This one would be in the upper half for sure.

I know what you mean. The constant, relentless campaigns against “social justice warriors” (SJWs) by the alt-right seem pretty senseless. (Seriously? These are the folks they’re all worked up about?)

But ‘SJW’ has gradually become shorthand for “anyone who calls bullshit on the far right,” and in that respect it makes more sense. Instead of engaging in a debate with your political opponents, it’s easier to dismiss them as attack-happy extremists spoiling for a fight. It’s an attempt to paint the enemy as irrational and few in number. There are even lists of them online.

As far as I can see, it’s been a generally unsuccessful and poorly thought-out strategy.

I like the phrase “knuckle dragger” myself: It conveys the caveman quality of the incels and alt-right, Mad Puppy riffraff.

Today I saw there was an actual review from one of their ilk listing the instances of “male bashing” in Captain Marvel. One of the instances he noted was Nick Fury doing dishes. And that’s a person from the peanut gallery we never would have heard from without the Internet. Not really worth dignifying with a response. Their irrational screeds get amplified because it’s something to gin up controversy and outrage and a (wholly founded) sense of superiority on the part of halfway decent people.

I just had a thought this morning about the incels and Gamergate and Comicsgate wankers: Think about all the westerns you’ve ever seen. There’s always that gang of nodding no-goods standing around behind the main bad guy. Simpering simpletons who throw in with the bully, minions who attach themselves to an alpha dog and gleefully lap up the cruelty they get to dish out and the entitlement they get to abuse in the name of the boss. They’re not worth talking to or engaging with. Yeah, in a western or action-adventure film they’re just a plot expedient: two-dimensional cardboard villains there to beef up the body count in the final showdown.

But some of these guys review-bombing films because of female casting (and that someone had NICK FURY DO THE GODDAMNED DISHES!), these are the real-life versions of those mindless and/or soulless people who populate the bad guys’ gangs in our fiction.

Sure, this is painting them with a brush, as it can be argued they do with “SJW.” But even their caricatured versions of conflicting perspectives tell us enough, I think. What’s their beef? They had a conniption fit because Brie Larson wanted to see more diversity in the journalists interviewing her (not that she didn’t want old white men interviewing her, mind you, just that she didn’t want ONLY old white men interviewing her). And she doesn’t smile enough in the movie. And Nick Fury does dishes. That’s actually their own words. And their issue with SJWs? Bleeding hearts who want to help the sick and the poor and push for equality; tree huggers who want to waste our money doing something about climate change.

Yeah, when I hear that kind of logic, I immediately suspect we’re dealing with a small but vocal group of high-functioning sociopaths. There’s not much you can do to reason with them. The best course is to do exactly what they whine and bitch about: marginalize them. Dismiss their worldview as rotten. Put more women and minorities and, yes, decent white men, at the table until they’re crowded out and their influence diminished and, hopefully, we finally evolve beyond them.

Then again, that sounds like utopian science fiction, doesn’t it?

The last thing I want to do is get into a political scrum (over a Marvel superhero movie, of all things – the ultimate corporate product!), but it’s only fair to point out that there are people on the other side of the wing-nut ping-pong table, folks who are ready to instantly label anyone who disagrees with their agenda racist reactionary fascists.

Gabe: I know! For me, this movie was grad school 🙂 On mouth-breather, I actually usually breathe through my mouth (haha) but I like Nick’s idea of knuckle-dragger. And yeah, on the surface of it, SJW is very counter-intuitive.

Glen: Totally agree. I love 70s Marvel cosmic comics and sorcery/horror. I was too young to really appreciate 60s cosmic stuff, which is a pity.

Hi Thomas – I’m happy to be corrected, but I only saw unreasoning criticism from the one side with regards to this movie. If there were others, I’d be curious!

I wasn’t referring to any reaction – on line or otherwise – to this movie, Derek. Just speaking of our general cultural/political “discourse.”

Thomas: Thanks for clarifying! Yeah, the structure of the discourse is definitely complex.

> it’s only fair to point out that there are people on the other side of the wing-nut ping-pong table,
> folks who are ready to instantly label anyone who disagrees with their agenda racist reactionary fascists.

Fair enough! And I think superhero movies are the perfect place for these high-passion culture battles. You can only get this worked up about something when it matters so little. 🙂