Much early science fiction concerned itself with the rise and fall of galactic empires, and I admit being rather taken with the idea in my youth. There’s something rather romantic in the notion of man’s ultimate destiny being among the stars, testing himself against vast and incalculably ancient powers as he carves a home for himself across the parsecs, proving his worth on the greatest stage of all through gumption, guile, and fearless determination.

Today the whole idea seems rather quaint, and more than a little naive. As modern history has shown us, empires — all empires — are built on blood, and the notion that war could somehow be a noble pursuit died a well-deserved death in the trenches of World War I. Modern news reporting, which brought the brutal realities and costs of war into our living rooms in the 60s, has largely prevented us from making the appalling mistake of romanticizing war and conquest the way previous generations did.

In science fiction, galactic empires largely fell out of fashion by the late 70s, nudged off the stage by the more mature model of Star Trek‘s Federation (and ultimately done in for good, I think,  by the depiction of the ultimate Evil Empire in Star Wars.) Personally I think the arrival of more women writers in the 80s and 90s played a huge part in moving SF past its early infatuation with interstellar imperialism, but that’s debatable.

Jerry Pournelle made a career of writing and promoting military science fiction, and he made no secret of his belief that wherever man went among the stars, he’d bring war with him. In the three-volume anthology series Imperial Stars (Baen, 1986-89), he and his co-editor John F. Carr collected over 1,200 pages of fiction and non-fiction on the topic of galactic empires, from authors like John W. Campbell, Jr., Poul Anderson, Vernor Vinge, Harry Turtledove, C. M. Kornbluth, Rudyard Kipling, Norman Spinrad, Eric Frank Russell, Philip K. Dick, Gregory Benford, Theodore Sturgeon, Christopher Anvil, Algis Budrys, Walter M. Miller, Jr., Everett B. Cole, Donald Kingsbury, and many others. The series is long out of print, but I recently came across a set and found it strangely irresistible. 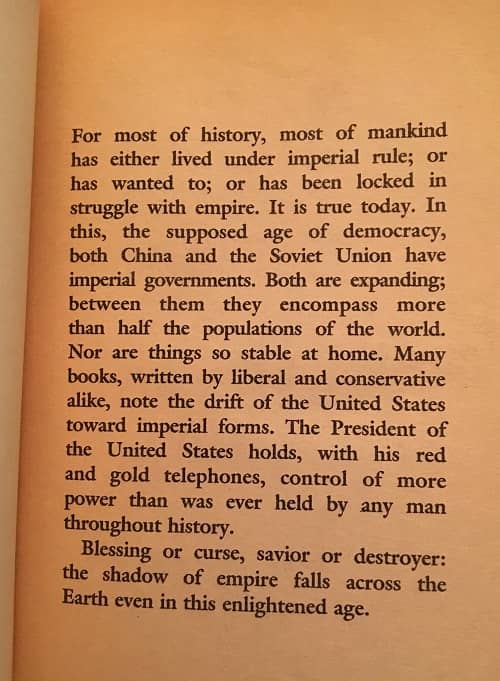 Inside cover text for Imperials Stars 1: The Stars at War

I’ve spent a few days with these books now, and I admit that part of my fascination is that I have no idea how seriously to take Pournelle, who at times seems to be arguing, oddly passionately, for empire as a wholly legitimate — even desirable — form of government. Here’s a snippet from his introduction to Imperial Stars 1: The Stars at War.

The late Harman Kahn once argued that the natural state of mankind is empire, and the natural size of an empire is the Earth: that empires grow until they encounter something capable of resisting them; and the only institution capable of resisting for generations is another empire. Republics by contrast are short-lived, and either succumb to the pressure of the empire on their borders, or transform themselves into empire in order to remain independent.

There is much essential truth in these observations.

At one point Pournelle even seems to be arguing, as he quotes from the writings of Darius the Great, the fourth Persian king of the Achaemenid Empire, that absolute rule is ultimately more beneficial for the people.

It does seem fair to ask…. is he legit crazy? I leave that as an exercise for the reader. To assist you, I’ve posted the first few pages of the intro below (click for empire-sized versions).

Whatever you think of Pournelle’s politics, the man knew how to assemble an anthology. Here’s the back covers for all three Imperial Stars volumes, and the complete Table of Contents for each. Pay special attention to the back cover of Volume 2, which states matter-of-factly that Volume 2 demonstrated that “throughout history, no matter what form they began, all governments become empires — or are conquered by them.” 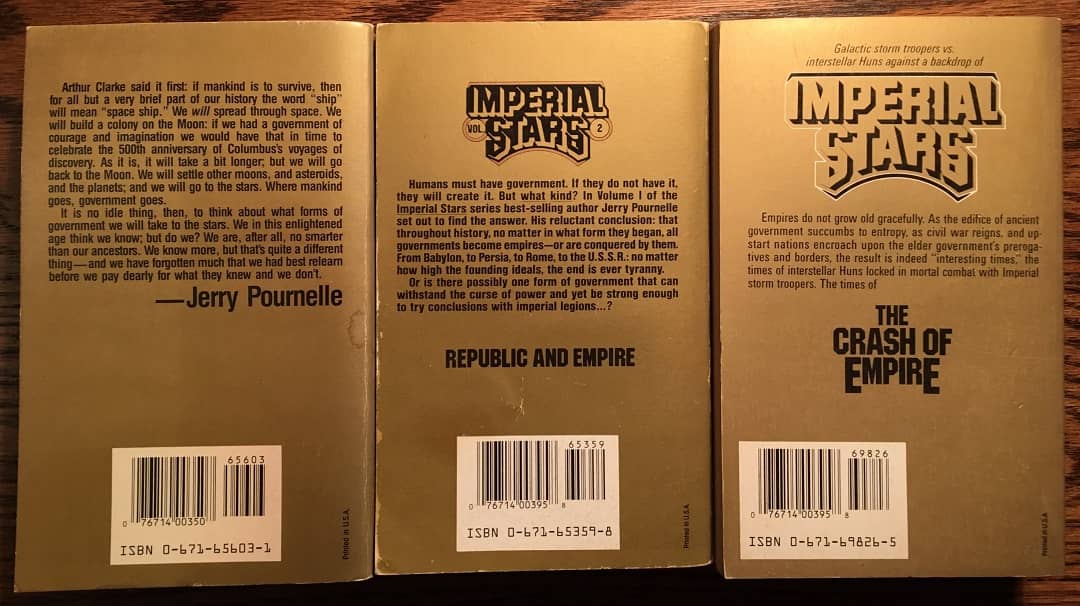 There’s a great deal of editorial matter in these books, tying the stories together. Most of the fiction has an Editor’s Introduction, and there’s a lot of non-fiction, some of it original to these volumes.

Here’s the TOC for Imperial Stars 1: The Stars at War. This volume has a 11 stories, all from Astounding/Analog, Planet Stories, or the anthology Stellar 1, including a Technic History tale by Poul Anderson and two original stories by Reginald Bretnor and Edward P. Hughes. It also contains several essays by John W. Campbell, James Burnham, and Jerry Pournelle, and poetry by Rudyard Kipling.

Imperial Stars 3: The Crash of Empire, which concerns itself with the decline of the interstellar empire, contains novellas by Walter M. Miller and W.R. Thompson, a Philosophical Corps novelette by Everett B. Cole, a Federation of Humanity tale by Christopher Anvil, essays by H. J. Kaplan and John W. Campbell, Jr., and (surprise!) a poem by Rudyard Kipling.

Here’s that introduction I promised you. 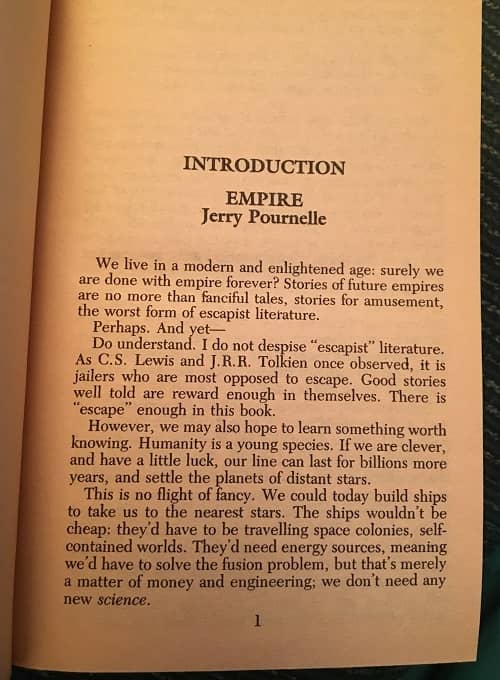 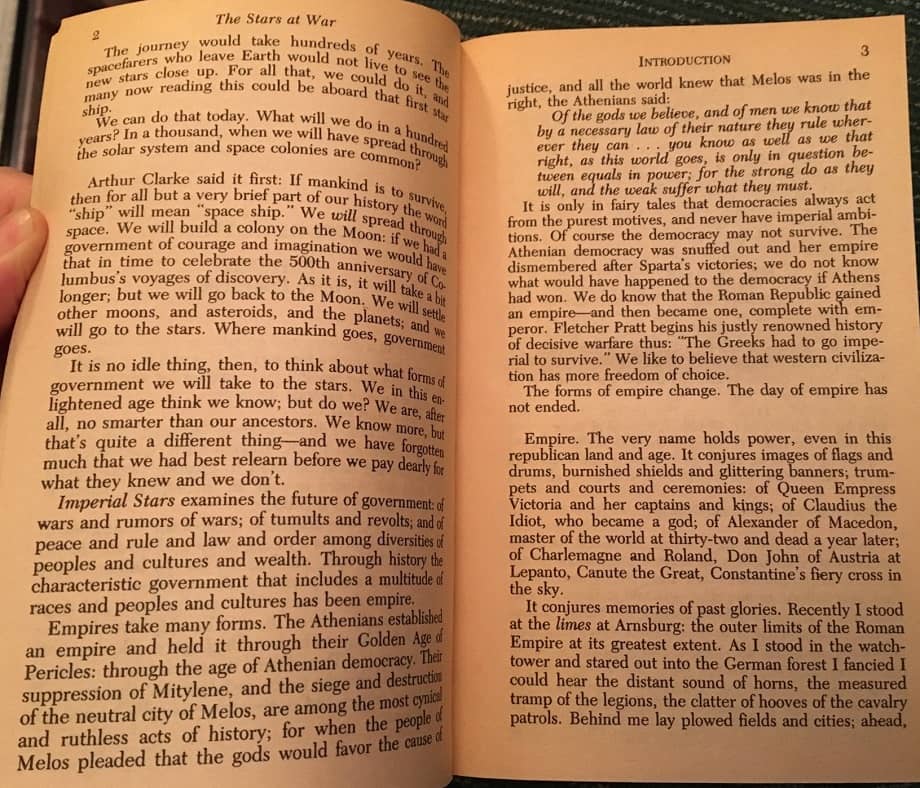 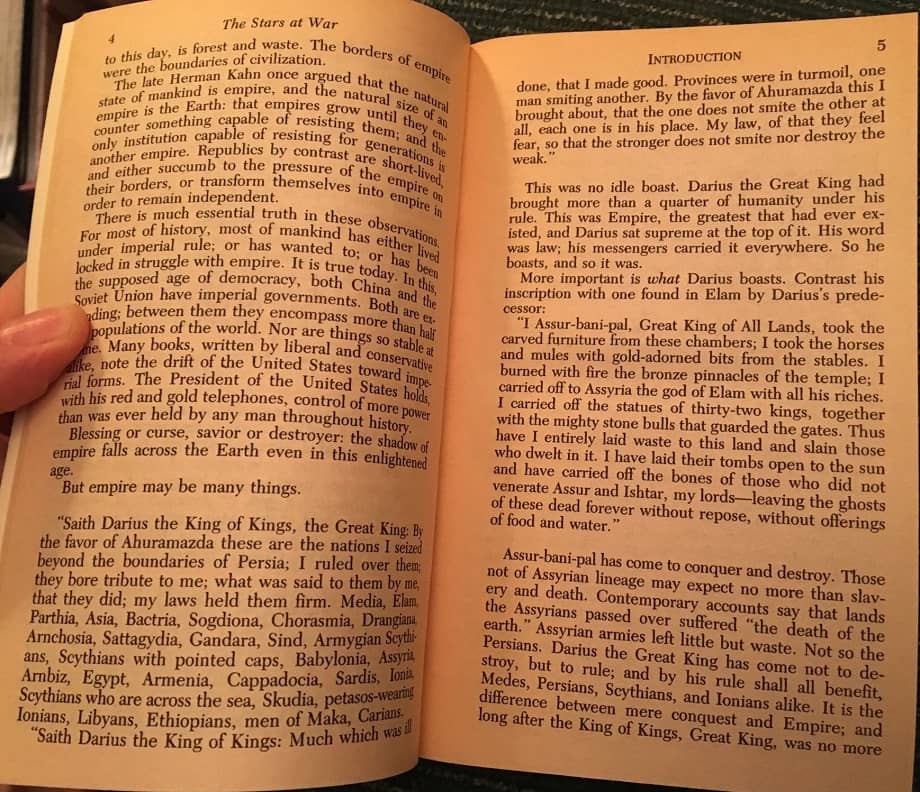 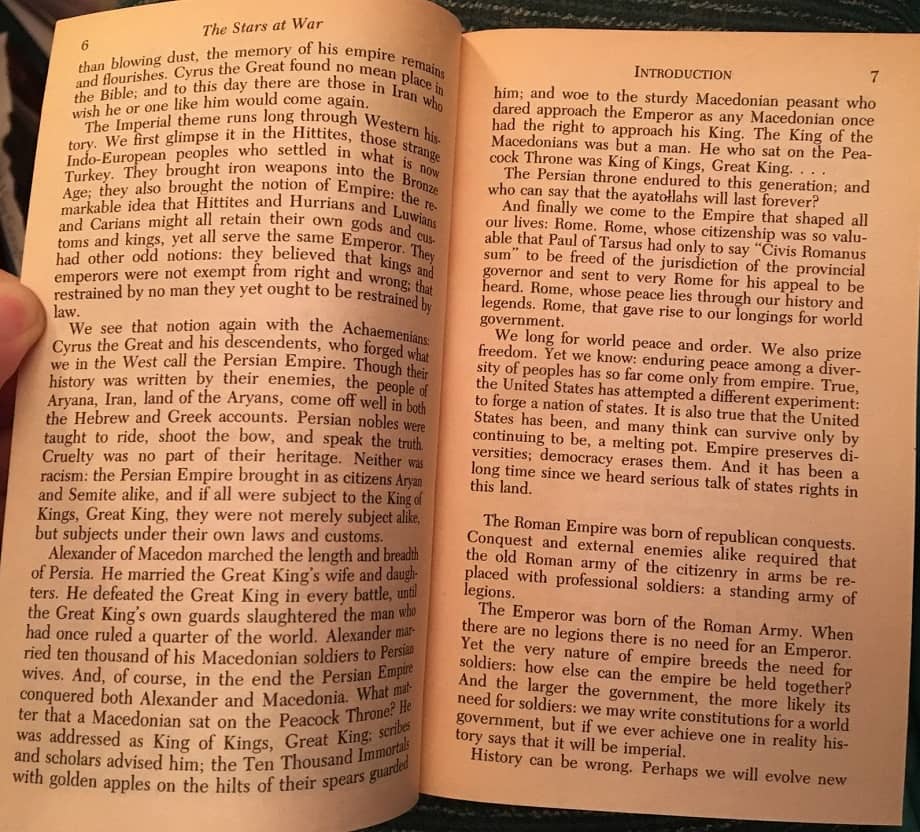 All three were published by Baen. None have been preprinted, and there are no digital editions. I bought mine on eBay earlier this month for $6 each.

Our previous articles by, and coverage of, Jerry Pournelle include:

Are the days of the full-time novelist numbered? by Jerry Pournelle
The Golden Age of Science Fiction: The 1973 John W. Campbell Award for Best New Writer: Jerry Pournelle, by Rich Horton

Uh oh. Whatever you think of Pournelle’s politics, as science fiction these look pretty good!

And as for galactic empires, don’t forget those wonderful Brian Aldiss edited anthologies.

I haven’t forgotten the Aldiss books — but that’s a great reminder. A few years ago I discovered he had several, all reprinted by Avon in the 70s in gorgeous paperback editions: PERILOUS PLANETS, EVIL EARTHS, and two volumes of GALACTIC EMPIRES. They were all terrific books, and I’ve been planning to do an article about them for ages. I’ll move it to the top of the pile…..

There was one more in that Aldiss anthology series – Space Odysseys. The paperback wasn’t Avon, for some reason. It was Berkeley and the cover, while nice, wasn’t nearly as good as those fantastic Avon ones.

I haven’t read any of these, but I loved those Aldiss anthologies! And have copies of all of them now.

There was actually a sixth one — in addition to Space Odysseys, there was one called Space Opera.

I think the only ones I ever actually read were the ones they had at the public library — the two Galactic Empires books, and Space Opera.

Let’s face it – most sci-fi has light year wide plot holes, no matter how ‘popular’ while anything ‘correct’ is probably obscure and too intellectual for most readers.

Star Wars – it saved science fiction by making it go mainstream – but if we made it real it’d have to be a near Level 4 civilization that’s retrograde pretending to be a failing near Level 3. BTW – prequels – Midichlorian whatever -that’s a technolgy edit of the planck constant to create literally a ‘force’ hence Level 4 tech.

But that’s a 12 parsec run ahead of Dune – which is essentially a universe built on several huge piles of Bolognium. Being “new wave” it relies on the social and ecological message of the story.

Not a Tolkien fan, but lots of de-bunking of various plot elements, etc. Fun recent YouTube video – “Where are all the farms, the towns” around various cities and such. Well those guys are afraid of guys with “Frodo Lives” t-shirts stabbing them, just as with Dune fans. A lot of fans allegedly burned William Shatner in effigy for years after his Saturday Night Live sketch.

SO – I think we can forgive Pournelle for having a niche in Military SciFi versus Heinlien to turned to Libertarian mixed with adult content… I’ve only read a few Pournelle books, but they were good.

BTW – a good example of correct but unpopular is HG Wells’s “When the Sleeper Wakes” – its often excluded from collections due to over socialist message even for Wellss and is a clunky early novel. But aside from the revolution in a scary way remniscent of those that would follow in the century upcoming well he predicted Netflix and digital copyright issues.

In that future the well to do could watch “Any play ever performed in the last century” with appliences at home. Simply put, if it was possible by Camera Obscura to project an image, and by photography to capture an image, it would eventually become possible to record plays and store them and re-broadcast them anywhere, anytime. And actors were complaining they were getting less money due to appearing in a play once then it was watched again and again.

Phillip Francis Knowlan used this, along with Jack London’s “The Unparalleled Invasion” so that when he got to “Airlords of the Han” he showed a decadent internet addicted culture – the bad guys of course. This is the sequel to “Armageddon 2419 AD” aka “Buck Rogers” as its become today. But a big confilct between the east and the west was controversial even when the non-pc stereotyping was popular even back then. Jack London’s original story would have sparked the Boxer rebellion if it hadn’t been sparked a decade or so earlier by journalistic hoax. It did, however, lead to agreements not to pursue biological warfare as Wells/Kordova movie “Things to Come” sparked a call not to use poison gas in WW2 even as it was booed out of theatres.

A helpful hint: any time you hear someone singing the praises of any particular social order, always ask them where they envision their place in it will be. Dollars to doughnuts it won’t be at the bottom.