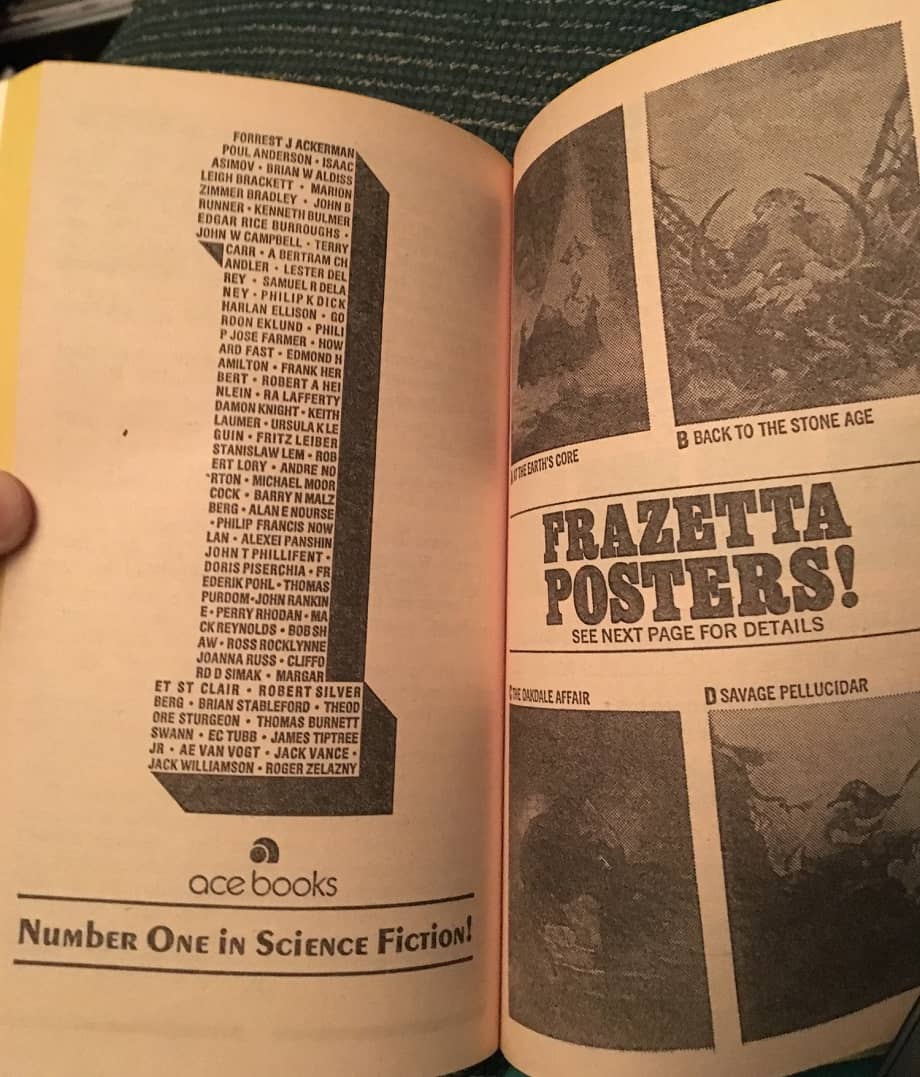 I bought a small collection of Mack Reynolds paperbacks on eBay last week, and they arrived yesterday. I settled in with them last night, and was surprised to find one of them, the 1975 title The Five Way Secret Agent and Mercenary From Tomorrow, which looked like a collection of two novellas from Analog, was actually an Ace Double. It didn’t have two covers in back-to-back dos-à-dos format, and the second book wasn’t printed upside down, but otherwise it was an Ace Double, with separate pagination for each novel and everything. It had the usual Ace house ads in the middle, which I normally flip past, but the double-page spread above brought me to a complete stop.

I mean, just look at this thing. Never mind the questionable tactic of trying to sell gloriously color Frazetta posters (for 3 bucks each) using muddy black & white images. Check out that house ad on the left: The number 1, formed from the names of the  most prominent authors in the Ace Books publishing family. And what a staggering list!

It’s not just the amazing list of authors — which is, let’s face it, a nearly unprecedented line up of talent for a single SF publisher. It’s that fact that most of those authors are still revered today, and in fact more than a few — Philip Dick, Ursula K. Le Guin, James Tiptree, and others — have achieved even greater fame in the intervening four decades.

Not everyone on the list is a household name today, of course. There are a few folks who have vanished or fallen out of favor, such as Robert Lory, John R. Phillifent, Thomas Purdom, John Rankin, and especially Marion Zimmer Bradley, whose name is about as toxic as you can get in modern fantasy. And they managed to misspell “Samuel R. Delany,” an embarrassing slight to one of the finest authors in the field.

But nonetheless, I find myself enormously impressed by the scale of the accomplishment of the editors at Ace Books, including:

and especially founding editor Donald A. Wollheim. There’s a more complete timeline of Ace Book editors at this Wikipedia page.

Here’s the book I found these ads in.

Ace is still publishing today. It was acquired by Berkley Books in 1982, and when Putnam Berkley was acquired in 1996, Ace became an imprint of Penguin Group USA. Ace doesn’t have a separate website, but you can see its current and upcoming titles on the Penguin Books website here.

As impressive as Ace Books was in the 70s, I’m going to resist the temptation to draw cranky comparisons to modern publishers. The fact is that science fiction as an industry was much smaller in the 60s and 70s, and the entire field was concentrated in the hands of a tiny number of publishers, including Ace, DAW, Berkley, Signet, Avon, Pocket, and Del Rey. Today science fiction is more popular and vital than ever, with thousands of SF and fantasy titles appearing every year from more publishers than I can count. Many of them, including Tor, Saga, Orbit, Houghton Mifflin, Angry Robot, St. Martin’s, Scholastic, and yes, Ace, support a family of authors that has every chance of being just as impressive 40 years from now.

So yeah, I could be an old man and tell you how much better we had it in the good ol’ days. But I know that’s just nostalgia talking. And the bitter truth that I don’t get to read modern SF in the same quantity, or with the same wide-eyed wonder, that I did when I was fourteen.

Instead of all that, here’s the flip side of that Frazetta ad (in case you want to mail away for those posters), and the inside flap/teaser page for the second novel, Mercenary from Tomorrow. 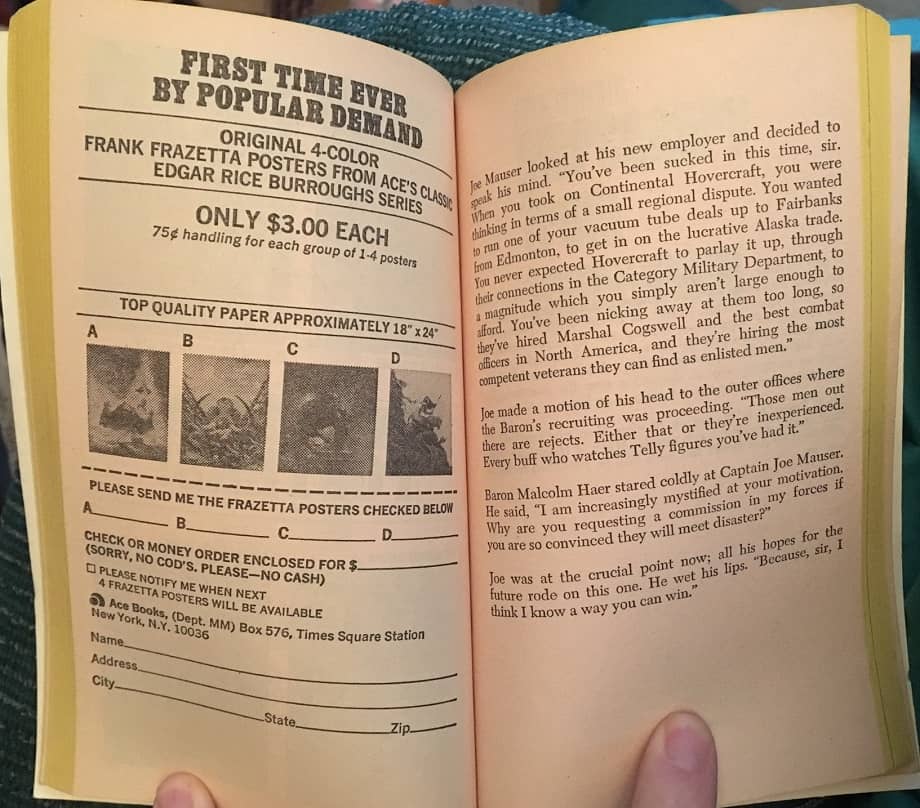 Anyone who read Ace paperbacks in the 1970s will know that books always closed with a list of titles from the same author. Here’s the last page of The Five Way Secret Agent and Mercenary from Tomorrow, with the impressive 1975 Ace catalog for Mack Reynolds. 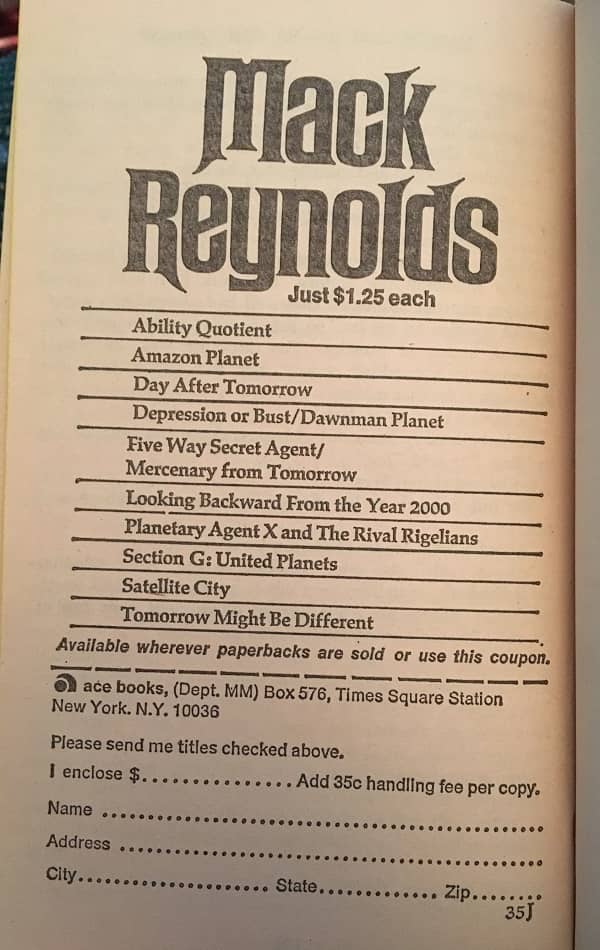 As enticing as that was, what really made my eyes pop out was the list of upcoming novels by Mack Reynolds, this one in the front of the book. 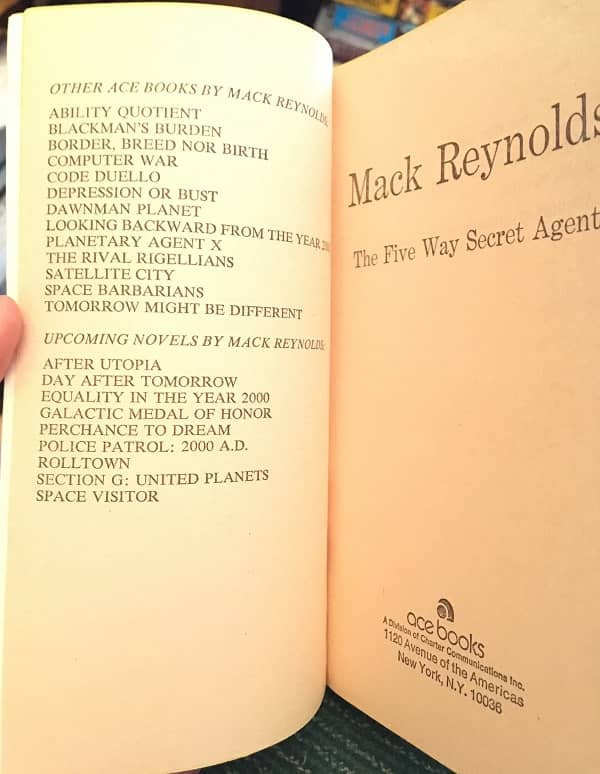 The cover of The Five Way Secret Agent and Mercenary from Tomorrow notes that he was was voted the most popular science fiction author by the readers of Galaxy and If magazines. In 1975, Reynolds was at the peek of his career. He died in 1983 and, unlike many of his brothers and sisters in the Ace family, his name did not live into the 21st Century. Virtually none of his work is in print today.

Mercenary from Tomorrow was originally published as half of an Ace Double in 1968, paired with The Key to Venudine by Kenneth Bulmer. 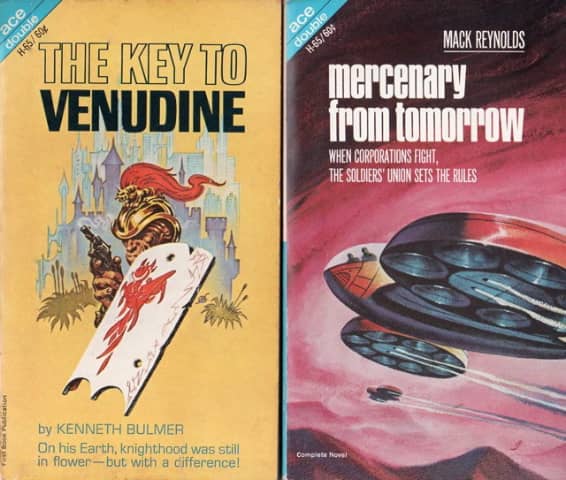 The Five Way Secret Agent was originally published in the April 1969 issue of Analog. 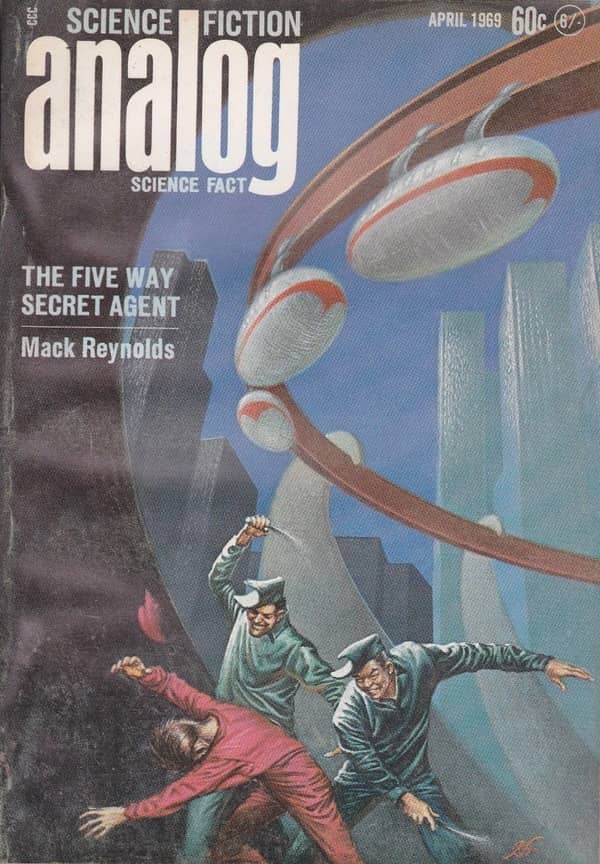 I bought The Five Way Secret Agent and Mercenary from Tomorrow last week on eBay, part of a four-book lot that sold for $10. All four were virtually brand new, pretty amazing for 40-year old paperbacks. 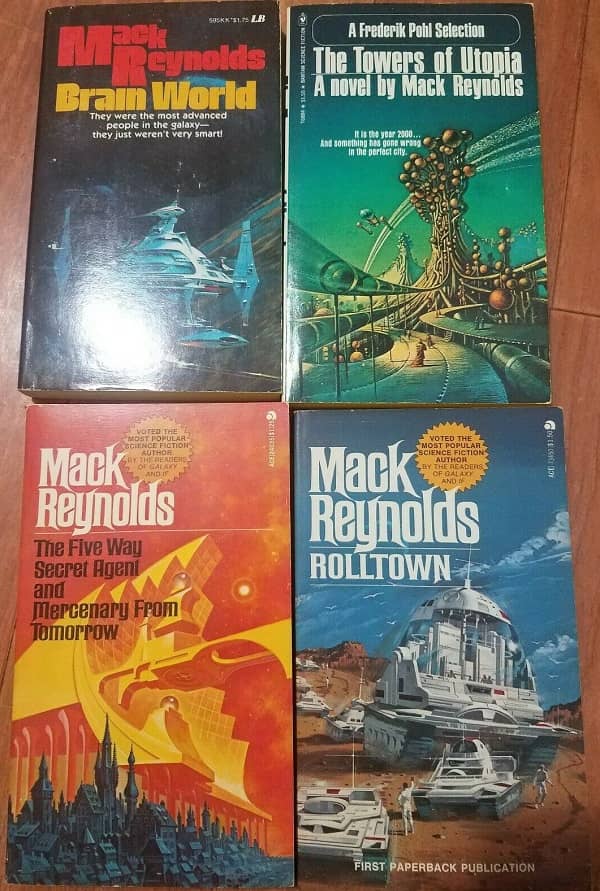 I especially love that Vincent di Fate cover for Rolltown; it’s the one that enticed me to bid for this lot. The only reason I picked up The Five Way Secret Agent and Mercenary from Tomorrow first was I figured I would try one of the novellas.

Here’s the back covers for the lot, courtesy of the eBay seller. 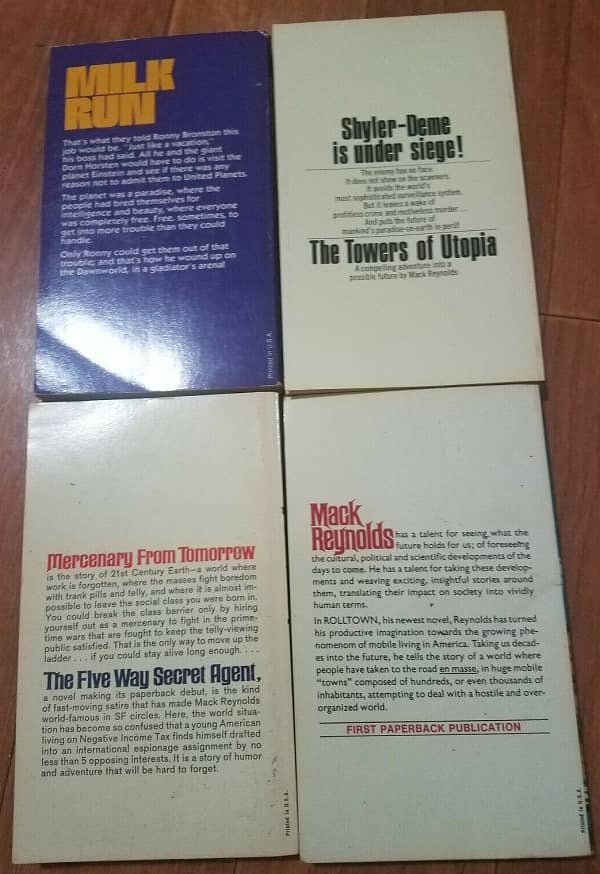 You can see why I was surprised to discover The Five Way Secret Agent and Mercenary from Tomorrow was an Ace Double. Sure doesn’t look like one from the outside.

The Five Way Secret Agent and Mercenary from Tomorrow was published by Ace Books in November 1975. It is 255 pages, priced at $1.25. The cover is by Jack Gaughan. It has never been reprinted, though both novels were offered in separate digital editions from Gateway/Orion in 2011.

Ace Books was the hand that rocked my cradle.

I’m right there with you.

Ever check out the ads from the Warren publications? Like Creepy, Eerie, Vampirella? Sometimes the magazines seemingly had 50% content for ads, lots of it was massive Star Wars merchandise but it was a whole pop culture feast for any fantasy, scifi, horror fan.

Note that said publication heavily employed Frazetta – indeed some of his masterworks started out as covers for here – Dracula vs The Wolfman is one of the early best – along with the first Vampirella cover painting.

They do have lots of pages of ads, including in B&W due to the limitations of the time with tons of even smaller thumbnails for posters, artbooks and of course back issues. A lot of these mags are on archive.org or otherwise scanned online for free – yes and in ‘official’ tpb collecitons – problem is both sets of republishers skipped the ads and often both the LETTERS and articles… IMO that’s very bad because it helps give a slice of culture from the day.

Anyone looking for this advise a trip to Ebay – don’t bay …$multi hundered$ for a “Collector’s” edition – a $3 or less with similar shipping charges, effective cover price including the shipping if it was published today – often as high quality as the bagged “Very fine” copies sold. Good thing to have for a slice of art and nostalgia and culture. I personally got a bunch of them (waiting for good cheap buys for ok or better copies) for art practice.

Only warning is NSFW – as in Not Safe for Wallet – you’ll view the ads and go right back to ebay to see if you can find that Brothers Hildebrant thing – or that Bruce Pennington book on Nostrodamus (got!) etc.

A real hoot — the Ace ad from the 1960s — advertising their Lord of the Rings edition!

Last page of A-8, their release of Myers’ Silverlock:

All three of the fabulous volumes of J. R. R. Tolkien’s Lord of the Rings saga are available in the new Ace paperback set of these editions.

“Superb — one of the major achievements of epic imagination in our lifetime, and your life is the poorer if you have failed to read it.” — Anthony Boucher

Notice: By arrangement with Professor Tolkien, these Ace volumes are the only American editions that are paying full royalties directly to the author. They are authentic, complete, unrevised and unabridged.

I love that cover on ROLLTOWN, too! Mack Reynolds wrote plenty about politics and economics of the future. I’ve enjoyed his books. Once again, you found a great deal on eBay: four good SF paperbacks for $10!

> A real hoot — the Ace ad from the 1960s — advertising their Lord of the Rings edition!

Those gorgeous Ace LotR paperbacks were highly collectible in the 70s, and they’re even moreso now. It’s been a while since I priced them, but I suspect they’re a tad about 75 cents. 🙂

> Mack Reynolds wrote plenty about politics and economics of the future. I’ve enjoyed his books.

As prolific as he was, I still managed to miss Mack Reynolds in my youth. He doesn’t seem to have a signature work or series. Any suggestions on where a new reader should start?

If you have a taste for the wonderful junk that lurked in the back pages of comic books and Warren magazines, I highly recommend a book called Mail-Order Mysteries: Real Stuff from Old Comic Book Ads by Kirk Demaris. X-Ray Specs, Jiu-Jitsu manuals, Moon Monster posters – it’s got ’em all.

I forgot all about this book! It looks like it’s still in print. Amazon has copies for $17. 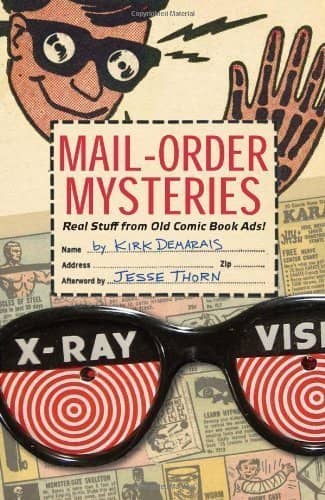 Here’s some of the internal pages. Click for bigger versions. 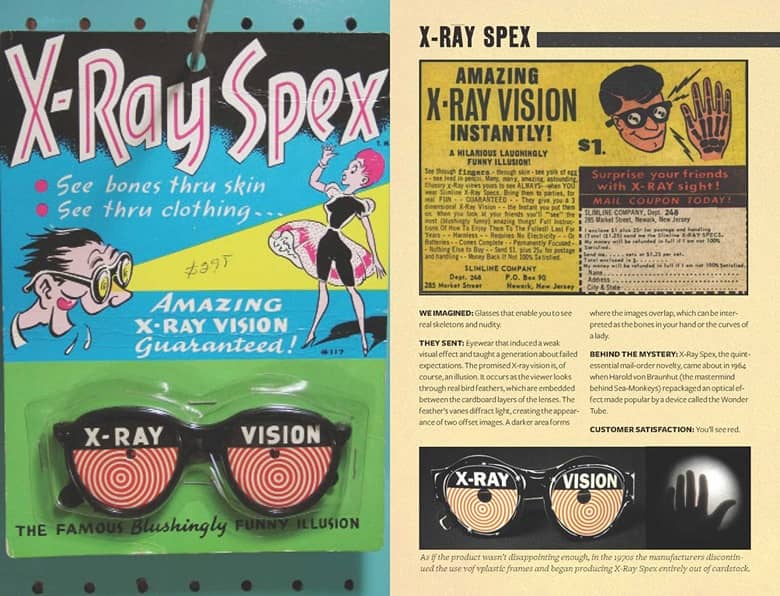 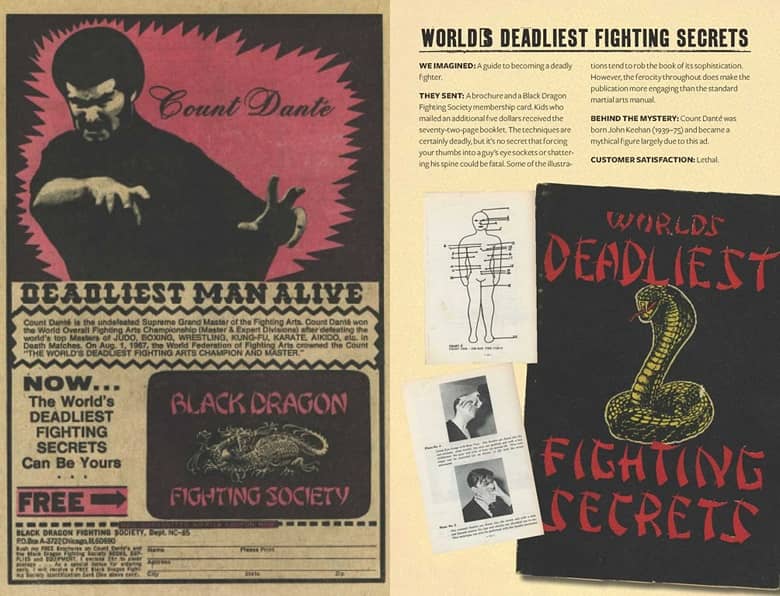 John, you might want to start with THE BEST OF MACK REYNOLDS(1976) and then try Joe Mauser Mercenary from Tomorrow. I’m slowly working my way through all of Mack Reynolds SF novels.

I don’t think they’re Ace paperbacks, but I tracked down an old collection of Karl Edward Wagner’s paperbacks a few years ago and chuckled to see full-color, card-stock, cigarette adds in the middle of the books! I vaguely remember seeing these sometimes in books but hadn’t seen one in awhile.

Another great find in buying used paperbacks is occasionally someone leaves their receipt or a bookmark. These sometimes can sometimes produce nostalgic moments, such as the receipt I once found showing that the book had been purchased at a Waldenbooks in some mall (name of the mall was on the receipt too). Great stuff!