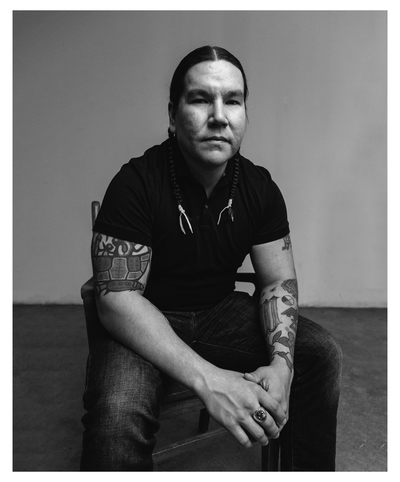 A while back at Can*Con 2017, I had the pleasure of meeting author and journalist Waubgeshig Rice for a panel discussion on post-apocalyptic fiction and First Nations perspectives in Canada. The panel came together partly because Waub was beginning to promote his then-forthcoming novel Moon of the Crusted Snow, which released in 2018 from ECW Press (and I reviewed a little while ago here). Despite being incredibly busy with different projects, Waub was game for a one-on-one interview to discuss Moon and some of his other work, which I’ve included in full below. Before that, here’s a little more information about Waub, courtesy of his website:

Waubgeshig Rice is an author and journalist originally from Wasauksing First Nation. His first short story collection, Midnight Sweatlodge, was inspired by his experiences growing up in an Anishinaabe community, and won an Independent Publishers Book Award in 2012. His debut novel, Legacy, followed in 2014. A French translation was published in 2017.

He got his first taste of journalism in 1996 as an exchange student in Germany, writing articles about being an Anishinaabe teen in a foreign country for newspapers back in Canada. He graduated from Ryerson University’s journalism program in 2002. He currently works as a multi-platform journalist for CBC News in Sudbury, where he lives with his wife and son. In 2014, he received the Anishinabek Nation’s Debwewin Citation for excellence in First Nation Storytelling.

ME: First off, thanks for doing this, Waub! I was chatting a little while ago with another author about the idea of using an “undefined menace” as a source of tension — and I’d say Moon definitely incorporates that. How did you walk the line of withholding just enough information from the reader to keep them guessing, without making things too nebulous and vague?

WAUB: My plan was always to keep the cause of the blackout a mystery. In fact, only I know what that is. My editor doesn’t know. Neither does my wife! The reason for the intrigue is the characters in the story would likely never find out what the cause was, given their distant setting, so I wanted to stay true to them. I also drew a bit of inspiration from Cormac McCarthy’s The Road with that decision. In that post-apocalyptic story, the reader never discovers what cause the end of that world. That creates an additional layer of tension, especially when the characters are mired in a chaotic struggle for survival.

Other details in the story are vague and mysterious, like the origin of the antagonist, Justin Scott. It’s also not totally clear what his intentions in the community are. Given that the novel itself is relatively short, I wanted to add to the tension and let the reader’s imagination do some work. So I held back a lot about him on purpose to add to his evil mystique.

There’s definitely a ton of darkness and mystery surrounding Justin Scott, and I can see him being read as representing that unknown about the apocalypse, for sure, but also as channeling contemporary issues related to colonialism. Were you hoping for a particular reading of his character?

On the surface, I was mostly hoping readers would despise him (laughs). I wanted to write the most loathsome antagonist as possible, and I tried to imagine morally repulsive person in a specific situation like this. He’s a mysterious man of a questionable background who arrives when the community is most vulnerable, and seizes his opportunity to exploit it and its people. Justin Scott is only looking out for one person, and he manipulates others and takes advantage of their good will to advance his own nefarious purposes.

On a deeper level, he’s an analogy for settler colonialism as it has historically shaped the country that’s now Canada. He’s a white man who ironically sets his sights on an Indigenous community displaced by colonization and a people whose culture has been brutalized by the ruling order. Now that the country of Canada has collapsed, the reserve becomes desirable as a safe haven and a land of opportunity. The cycle of colonialism continues through Scott in an ironic way. 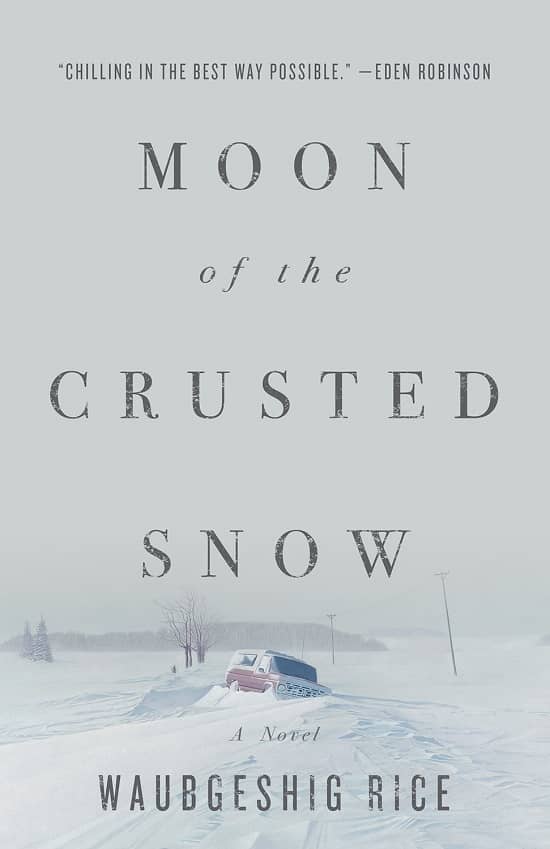 Ha! I’d say you succeeded in creating a character to hate with Justin. Were you hoping for a visceral reaction from any of your other characters? A couple that stuck out for me were Cam [the younger brother of protagonist Evan] and Auntie Aileen [one of the community’s elders], but I’m curious if you were hoping others would take center stage.

I hoped readers would be able to connect with some of the secondary characters in different ways. With Aileen, I wanted her to be revered and loved. She is very much the cultural cornerstone for many people in the community, and she’s also a strong connection to a bygone era that holds the answers to surviving the crisis. She is kind and wise, and above all, deeply respected by most. I feel the same way about elders in my community, and I wanted to invoke those same feelings in the reader. Also, her name is an homage to my late grandmother, who was also a respected elder in my community.

As for someone like Cam, I think I only wanted people to be annoyed with him (haha). I think many of us have that younger family figure who seems to drag their heels and not quite step up when they need to. We all have someone in our lives who could use a little nudge. But in a time of widespread catastrophe, a slacker like Cam is either easily manipulated or potentially doomed. Overall, I would say I tried to convey something in each character — no matter how minor — that would yield some sort of visceral reaction.

I’d say you definitely pulled that off, Waub. Given the roles that a lot of these characters play, were you worried about any of them being read too much like tropes? Aileen, as an example, has a powerful voice and a lot of nuance, but being the story’s elder presents a risk in how she’s going to be perceived, right?

Thanks, Brandon! I’m glad you appreciated the depth of the characters. I wasn’t really worried about them being read like tropes. In fact, I tried to buck some tired tropes. For example, the common stereotype of chief in council is one of incompetence and corruption. Although the leadership in this community faces some serious challenges, the people in those positions genuinely care about the well-being of their members and try their best to keep them safe in this crisis.

One of the other things I liked about this novel was that whatever is going to happen next for your main characters is ambiguous, but there’s still a clear sense of hope and optimism. Did you inject that hopefulness for any specific reason?

There are some things I intentionally left ambiguous simply for the sake of the reader’s imagination. The fates of a couple of them may not be totally clear, especially because the epilogue picks up a couple of years after the second part, but I think that hope you’ve identified can help readers draw more positive conclusions. Overall this crisis is an opportunity for this community to renew itself, and while there are some very difficult challenges at first, I think the key to survival becomes clearer to the characters as the story develops — it’s in the land and culture. Despite all the things this community has endured historically, then compounded by this catastrophe, hope remains, and that’s what ultimately lifts these people out of this despair.

How important do you think hope is for science fiction and fantasy today (or fiction in general)?

I think hope is pretty crucial in fiction in general. We live in a pretty negative cultural climate overall, so it’s important to shine a light on the things that are good and give us promise for the future. That’s not to say we should gloss over some of those harsh elements of everyday life; we should definitely acknowledge them and the problems they’re causing in dividing people. But hope can be the antidote to that, and in fiction, we’re able to create situations that convey how we can overcome despair. And with science fiction and fantasy, we’re able to speculate a hopeful future or a more positive world. That’s the beauty of speculative fiction. We’re able to imagine a realm beyond the hardships we’re enduring today, and just how hope can pull us through to a better place. 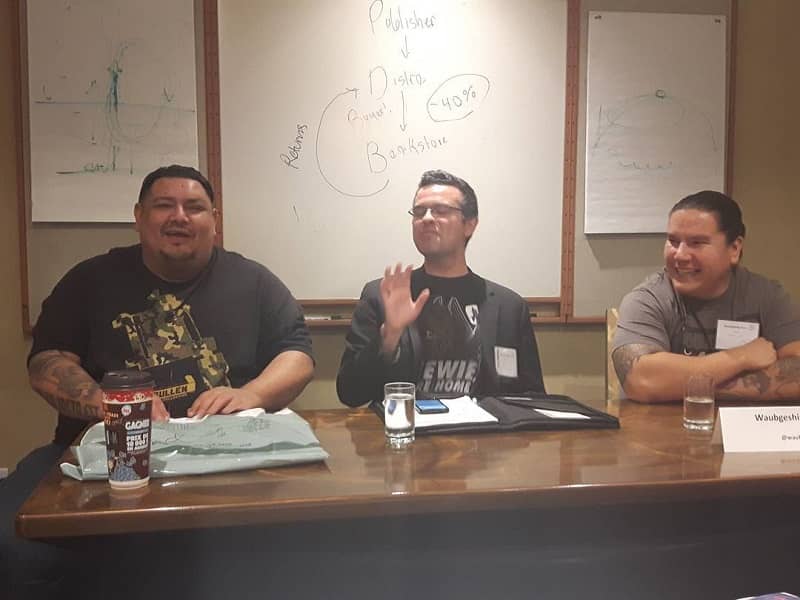 You’ve also got a powerful platform in your role with CBC. Do you find yourself trying to inject more hope there, as well?

I’ve always tried to share hopeful elements of stories as much as I can at CBC. Of course, that always depends on the nature of the assignment and the time and ability I have to put a story together. But my favourite stories are always the positives ones I’m assigned to cover. It could be an inspirational story of someone overcoming adversity, or a nice community-oriented initiative that aims to make positive changes. Now that I work as a radio current affairs host, there’s more room for stories and interviews like that, which I really enjoy and appreciate.

Between SFF and literary fiction (like your previous works) do you have a feeling about where you might direct your attention next? Do you have any plans for more fiction, or will you focus more on journalism?

Well, journalism will always be my primary job, so my focus during the day will be my role as the host of CBC

Radio’s Up North for the foreseeable future. But outside of my day job, I’ll always be writing. I’m currently working on some short stories that are more literary fiction, and I’m also developing a non-fiction book project. But having taken my first steps into speculative fiction, I will definitely keep exploring that genre. Given the good feedback to Moon of the Crusted Snow so far, I’ve been encouraged to consider a sequel. So the wheels are turning there! I also really enjoy the different possibilities around exploring Indigenous futurism, so I will definitely write more in that vein in the future. Plus, it’s been really awesome to be introduced to the SFF community! I was thrilled to attend Can*Con in 2017, and really enjoyed the discussions happening there.

Seeing you at Can*Con was awesome! I would totally vote for a Moon of the Crusted Snow sequel. Any other events, etc, coming up for you that we can signal boost?

Thanks! I’m pretty eager to dream up a sequel, so I really appreciate your enthusiasm! As for this year, I’ll be doing more touring for Moon of the Crusted Snow in the spring, with some events in Ontario, Quebec, and Nova Scotia. Details for most of those are still to be announced. Otherwise, I really appreciate the interest in the new book, so I’ll just keep boosting it! Thanks a lot for this opportunity, Brandon. Your support of storytelling in all its forms is greatly admirable!

Keep an eye out for more from Waub in the future!

An Ottawa teacher by day, Brandon has been published in On Spec, Pulp Literature, Electric Athenaeum, and elsewhere. Check out his latest short story “Exactly What You Need,” about a magical bookstore misused by a grieving mother, in the latest issue of Abyss & Apex. You can also follow Brandon at brandoncrilly.wordpress.com or on Twitter: @B_Crilly.