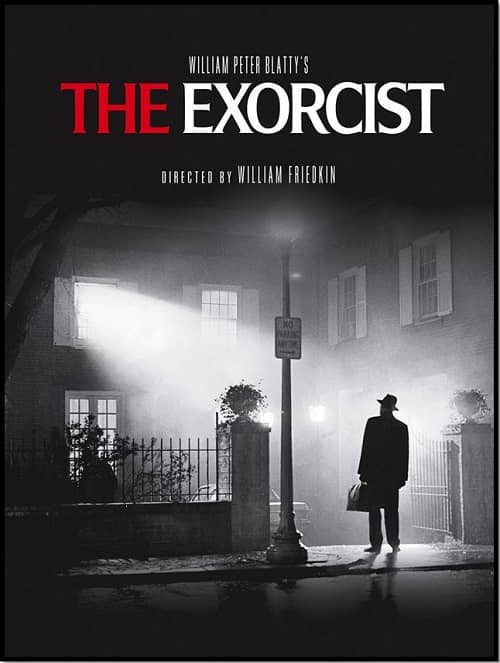 Long before Emily Rose, or Emma Evans there was Regan MacNeil, a once normal little girl who became quite a handful thanks to an imaginary friend who, as it turned out, happened to be an ancient Mesopotamian demon king. It was just over 45 years ago, on December 26, 1973, movie-going audiences were treated to what would come to be known as one of the scariest horror movies of all time – The Exorcist.

Based on William Peter Blatty’s novel of the same name, The Exorcist tells the story of a little girl possessed by the demon Pazuzu and the priests charged with saving her soul. There are tales of people being so frightened of Blatty’s book that they keep it in a separate part of the house, like a garage, a linen closet, or even a freezer; because it’s common knowledge that ancient demon spirits go dormant in the cold and can’t manage closed doors.

The movie terrified audiences even more so, with some believing there was actual evil contained in the film stock. Looking at the adjusted, highest-grossing film list, so named as all totals are twizzled to account for inflation, The Exorcist bests even Avatar. It racked up $232 million in box office takings, over $900 million by today’s standards. What is even more fascinating is the profound difference 45 years has made in what audiences consider terrifying. In spite of the advancements in special effects technology that make some of The Exorcist scenes borderline comical by today’s standards, no movie since its premier has had such an effect on movie-goers.

I’m not insinuating The Exorcist isn’t scary, but how people reacted to it at the time is beyond anything that has been seen since, even though Hollywood’s ability to scare us in increasingly convincing ways, gets more sophisticated by the year.

Want to see for yourself?

Let’s jump in the way-back machine to early 1974 to examine the craze around The Exorcist. Take a gander at a documentary created at the time, which features interviews with theater employees and audience members. They talk about witnessing fainting spells and vomiting at every showing in the theater in Westwood, CA. Some of the best interviews are with cinemagoers who have left mid-screening and can’t compose themselves. It reveals what a complete phenomenon the release of the movie was, with one police officer working security stating, “It’s something I never saw in my whole entire life. It’s something different, and I went to a lot of movies but I’ve never seen anything like this time myself.”

The clip is about 20 minutes long but it’s well worth watching until the end. Modern audiences will likely never see something similar again.

I would love to hear what the Black Gate community thinks of this one. Post a comment or drop a line to sue@blackgate.com.

I didn’t actually WATCH The Exorcist for the first time until just a few years ago, at which point I thought that yeah, it was pretty good although the pace & the story structure (or lack thereof) were VERY 1970s.

The only other movie that I can remember having this kind of direct impact on the audience was Blair Witch Project, although that was more a case of people being made nauseous by the shaky camerawork. Well, and maybe the possible seizure-inducing strobe lights in Incredibles 2.

JH: Blair Witch came to mind with its semi-hysteria around whether or not it was “real”. Due to some great guerrilla marketing, there were fake newspaper articles and a fake Burkittsville, MD home page talking about the missing persons. Here’s an article that does a good job explaining it all: https://www.thrillist.com/entertainment/nation/blair-witch-project-true-story-burkittsville-maryland

The movie definitely had similar “hype” but to your point, the last time I saw anyone hurl in a theater, it had nothing to do with what was on the screen.

To be very honest I have only clips here and there. There are certain movies I decided years ago I would never watch for good, bad and silly reasons. However I had a clerk in the Air Force -my first airman I was ever a supervisor of and she was a handful-always had an opinion and not afraid of any one or anything. Until she came back the next day from seeing this film in Grand Forks ND. I had never before or afterwards seen her entirely subdued and for once we exchanged no petty remarks back and forth. She was a treasure. My other experience with the film was visitng an airman in her room while she was ironing some clothes and the intimate cross scene was on the TV (she ahd HBO) and that convinced me this film would not be watched any year soon-or later.

Allard – first, thank you for your service. Second, that scene coupled with Linda Blair’s age at the time make you wonder if that would ever get past today’s film board. Point taken.

You’re welcome Sue(if I may call you that-over the years Mam has gotten me dirty looks. My military career was a lifetime ago-21 years then 23 as a AAA dispatcher 🙂 That scene was shocking back then and would probably still pack a punch today. On the other hand I suspect Cable Tv has diluted a lot of our sensitivity towards violence. Often it’s about timing and the effect one wants to convey. Compare the shooting of the 50 in The Great Escape to the ending of The Wild Bunch. Each make their point by what is shown or NOT shown. The Exorcist had to make the threat real or an even better closer example–Bonnie and Clyde vs. Butch Cassidy and the Sundance Kid. What I feel movies do nowadays is make to TOO easy on an audience by spoon feeding every bit of information with a hammer and an ad placement. Just observing. (Ona side note Chinatown is my favorite detective movie because t does NOT tell you everything-you discover information the same time Jack Nicolson does and it all works. The intelligence of the audience is respected.

Allard, great points all and my feeling exactly. The ante has been upped with impressive special effects and we as the audience are desensitized to the point where not much phases us. It’s why I prefer “subtle” horror that doesn’t spill buckets of blood, rather than those in the “psychopath training films” category.

I was too young to see The Exorcist when it was released. I saw it in 1979 at a friend’s home (the first time I saw a VCR). His parents had gotten a copy and we watched it while they were out (got to love the 70s). It is still to this day the scariest thing I remember seeing. I can’t hear the music without feeling the chills.

The horror films of the past are much better than the slasher films of the last two decades. Sure they are more graphic today but they aren’t scary, just gross or sickening. Films like The Exorcist did more with the suggestion of vileness and depravity than any CGI bloodfest today. Unfortunately, I’m not sure we can return to truly frightening films given today’s shock hungry audiences.

V Russ, I’m with you. My first Exorcist experience wasn’t until its box office legend had long since been relegated to the sale DVD bin at the local grocery, but when I did finally see it, the impression it left was long-lasting. Not for the scares per se, but more the overall approach to the subject matter.

I have since seen a plethora of possession movies, all owing something to the Exorcist, but never quite getting it right. Its why the film included in the post is so endlessly fascinating.