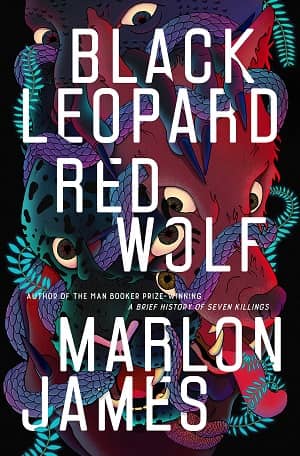 Last year I bought a copy of Marlon James’s A Brief History of Seven Killings, a widely praised novel that won the Man Booker Prize. His latest, Black Leopard, Red Wolf, a 640-page fantasy epic published this week, arrives with the kind of advance praise most writers can only dream of. The New York Times calls it “The literary equivalent of a Marvel Comics universe,” Rolling Stone labels it ”a stunning, word-drunk take on sword-and-sorcery sagas,” Neil Gaiman says it’s set in “A fantasy world as well-realized as anything Tolkien made,” and the LA Times proclaims it “Absolutely brilliant.” But my favorite quote is from Entertainment Weekly, which said:

Drenched in African myth and folklore, and set in an astonishingly realized pre-colonized sub-Saharan region, Black Leopard crawls with creatures and erects kingdoms unlike any I’ve read… This is a revolutionary book.

Over at Tor.com, Alex Brown gives us a better sense of what folks are so excited about.

Y’all, Marlon James’ Black Leopard, Red Wolf is a miracle. It’s a gift from Anansi himself. This book. This book. THIS BOOK.

Dead. I’m dead. I have died. It is so good it killed me. Murdered by my own ARC. Please bury me in my To Read pile.

The basic story is this: a man known only as Tracker, and several of his acquaintances and enemies, are hired to find a boy. The boy is missing (or not) and may be dead (or not). Of the hired group, there are those wish to find the boy, those who plan to kill him, and those who want him to remain missing. Some are human, some witches, some mercenaries, and some are magical beings. Who is the boy? What happened to him? What was really going on? Is Tracker lying? What if he’s really telling the truth?

But the plot isn’t really the plot. Finding the boy provides the skeleton, but the muscles, blood, and heat come from everything that happens along the way. This is no stroll through a dreamland of fairies and pixie dust. James drags us through a nightmare world of shapeshifters, witches, mermaids, mad scientists, cannibals, vampires, giants, sadistic slavers, selfish monarchs, and a sentient buffalo…

Good things continue to happen for this book. The film rights were snapped up just yesterday by Warner Bros and Michael B. Jordan’s Outlier Society.

Black Leopard, Red Wolf was published by Riverhead Books on February 5, 2019; it is the first installment of The Dark Star Trilogy. It is 640 pages, priced at $30 in hardcover and $14.99 for the digital edition. The cover artist is uncredited. Read the complete first chapter here, and see our recent New Treasures here.

John, your first sentence has the book title wrong.

Whoops! I guess that, after 4 decades as a gamer, I see White Wolf everywhere….

Thanks for the correction. I fixed it.

A Brief History of Seven Killings was incredible. One of the best novels I’ve read in recent years, and well deserving of the Booker.
Looking forward to this eagerly.

Usually this much hype doesn’t mean a lot to me, but I just read the first few chapters of the free excerpt and DAMN! I’m sold. I look forward to reading this book, which will probably further convince me that I shouldn’t be writing anything at all. Some people have the magic, some don’t. Marlon James has it.

Just bought this, both because it sounds great and on the strength of your reaction, Mr. Fultz. I loved your story “The Vintages of Dream” in Black Gate #15.

Oh, wow–thanks so much, Chris!