Science Fiction has a reputation — deserved, I think — for being an inhospitable market for non-English writers. Some of the great science fiction writers of all time, like Jules Verne, Jorge Luis Borges, Stanisław Lem, Arkady & Boris Strugatsky, Pierre Boulle, Elizabeth Vonarburg, and Karel Čapek, wrote in languages other than English…. but remarkably few found real success with American readers.

But that’s changing rapidly as the world gets smaller, and the American appetite and appreciation for international culture grows, especially among the young. Japanese anime, manga, and videogames have been hugely popular in the US for decades, and that helped open the door for Asian cinema, Bollywood, K-pop, Afrofuturism… and much, much more. Clarkesworld magazine has published a Chinese SF story in translation every issue for the past two years, and writers like Cixin Liu (The Three-Body Problem) have achieved breakout success in the U.S.

Ken Liu (The Grace of Kings, The Paper Menagerie and Other Stories) has been at the forefront of the Chinese SF invasion, as both promoter and translator. Invisible Planets, his 2016 anthology of contemporary Chinese SF in translation, came in #2 in the Locus Poll for Best Anthology. This month he builds on that success with Broken Stars, a brand new collection of 16 short stories from Liu Cixin, Hao Jingfang, Xia Jia, Chen Qiufan, and many others. It also includes three essays that explore the history of Chinese SF, survey modern Chinese fandom, and the impact of the growing popularity of SF in China. Broken Stars arrives in hardcover from Tor on February 19. 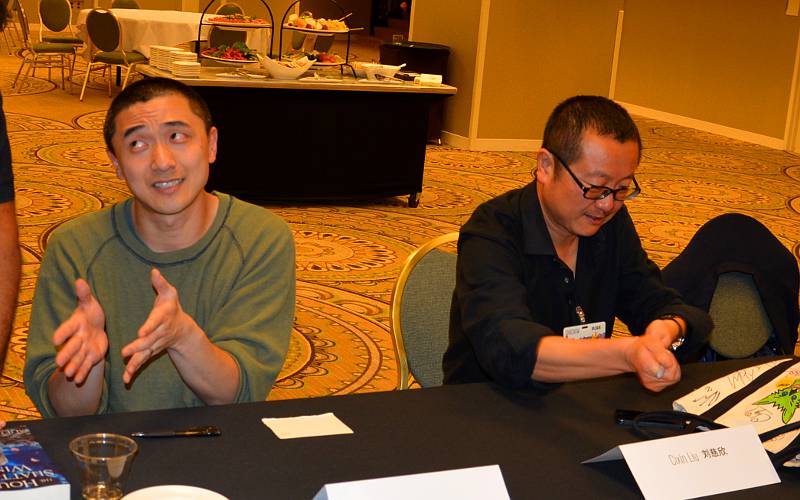 In addition to his short story translation work, Ken Liu was the translator for the bestselling The Three Body Problem by Cixin Liu. Here’s the description for Broken Stars.

Some of the included authors are already familiar to readers in the West (Liu Cixin and Hao Jingfang, both Hugo winners); some are publishing in English for the first time. Because of the growing interest in newer SFF from China, virtually every story here was first published in Chinese in the 2010s.

The stories span the range from short-shorts to novellas, and evoke every hue on the emotional spectrum. Besides stories firmly entrenched in subgenres familiar to Western SFF readers such as hard SF, cyberpunk, science fantasy, and space opera, the anthology also includes stories that showcase deeper ties to Chinese culture: alternate Chinese history, chuanyue time travel, satire with historical and contemporary allusions that are likely unknown to the average Western reader. While the anthology makes no claim or attempt to be “representative” or “comprehensive,” it demonstrates the vibrancy and diversity of science fiction being written in China at this moment.

In addition, three essays at the end of the book explore the history of Chinese science fiction publishing, the state of contemporary Chinese fandom, and how the growing interest in science fiction in China has impacted writers who had long labored in obscurity.

“Goodnight, Melancholy” by Xia Jia
“The Snow of Jinyang” by Zhang Ran
“Broken Stars” by Tang Fei
“Submarines” by Han Song
“Salinger and the Koreans” by Han Song
“Under a Dangling Sky” by Cheng Jingbo
“What Has Passed Shall in Kinder Light Appear” by Baoshu
“The New Year Train” by Hao Jingfang
“The Robot Who Liked to Tell Tall Tales” by Fei Dao
“Moonlight” by Liu Cixin
“The Restaurant at the End of the Universe: Laba Porridge” by Anna Wu
“The First Emperor’s Games” by Ma Boyong
“Reflection” by Gu Shi
“The Brain Box” by Regina Kanyu Wang
“Coming of the Light” by Chen Qiufan
“A History of Future Illnesses” by Chen Qiufan