I stumbled across a copy of Stories of the Supernatural in a paperback collection I acquired a few months ago, and fell in love with it immediately. Partly it’s the great table of contents — eleven classic tales of supernatural horror by E. F. Benson, Arthur Machen, Saki, Charles Dickens, W. W. Jacobs, and others. And partly it’s the early 60s, breathlessly over-the-top marketing copy (“Read it in the daytime… and hope your blood will unfreeze by the time the terrors of the night steal in.”)

But chiefly it’s the knockout cover by Richard Powers. Huge swatches of color, giant staring faces, and a dark backdrop reminiscent of deep space… that’s classic Powers all right. I don’t know what it is I find so deeply satisfying about settling down in my big green chair with a vintage paperback anthology from a great editor, but whatever it is, the feeling is significantly amplified by a Powers cover.

Speaking of great editors, the one on duty here is Dorothy L. Sayers. She had a surprising assortment of genre anthologies to her credit, such as Great Short Stories of Detection, Mystery and Horror (1928) and its two follow-on volumes. Two of her later paperback anthologies, Human and Inhuman Stories (1963) and Stories of the Supernatural (1963), both released posthumously, were selections from her massive 1929 anthology The Omnibus of Crime, a 1,177-page Harcourt hardcover. I’m very glad I found Stories of the Supernatural, but I’m even more pleased that it led me to discover The Omnibus of Crime, which is a truly monumental survey of early crime fiction (even if it doesn’t have a Power cover).

Copies are easy enough to find. Coverless copies of the 1929 edition are widely available on eBay for under $15, and you shouldn’t let the lack of a cover bother you — it was pretty boring anyway. This week I found a 1929 Book Club edition with a dust jacket in pretty good shape on eBay for $18 (see below).

When I have a chance to spend more time with it I’ll report back here.

In the meantime, Stories of the Supernatural is an entirely adequate substitute, especially for those of us whose tastes run towards otherworldly scares anyway. Here’s the inside flap, with three story descriptions, to whet your appetite. 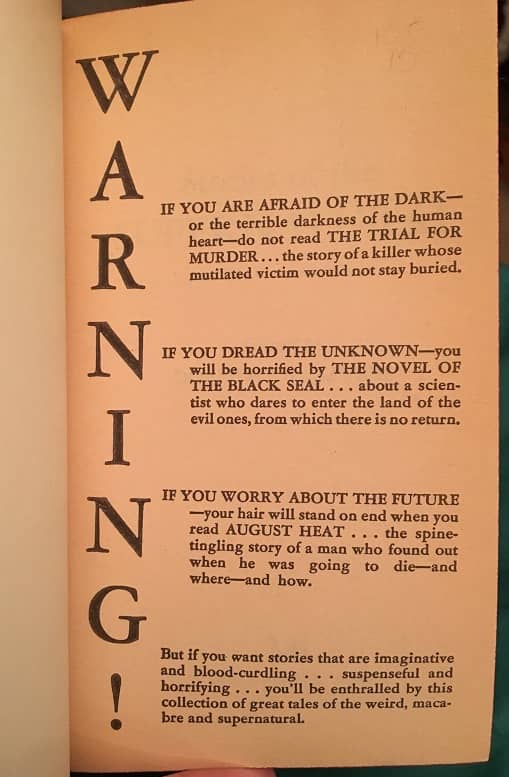 Stories of the Supernatural was published by Macfadden-Bartell in 1963. It is 144 pages, priced at 50 cents. It was reprinted once, by Manor Books in 1974, and there is no digital edition. The cover is by Richard Powers.

1929 omnibus of crime?! Sounds cool. Both titles sound cool. I do find that massive yellow arrow extremely distracting though.

This looks very nice – sort of like those old Alfred Hitchcock anthologies. Nothing better than those!

> I do find that massive yellow arrow extremely distracting though.

I bet it drove the artist crazy, too. It’s not part of the artwork, and was probably added by the Art Director as they laid out the cover (you can tell because the arrow has a different orientation on the front and back covers.) I can just imagine Powers reaction when he saw it….

> sort of like those old Alfred Hitchcock anthologies. Nothing better than those!

You know, I didn’t discover just how many of these there were until fairly recently. Robert Arthur edited a bunch of YA-marketed anthologies with the Hitchcock brand, I’m still not sure how many there are. But I’ve enjoyed all the ones I’ve found!

The last one we looked at here was MONSTER MUSEUM:

Mark Rigney looked at GHOSTLY GALLERY back in 2012:

Maybe we’re overdue for a survey?

Those Hitchcock YA paperbacks were usually edited down from more substantial hardbacks, which are rather hard to find, and definitely worth grabbing if you get the chance.