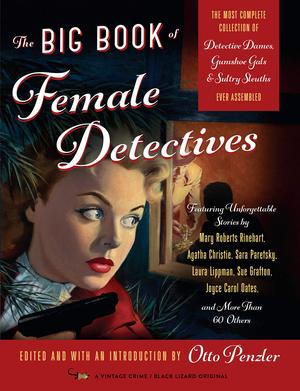 I think that if I were stranded on a desert island, and I could grab the works of a single writer to bring with me before my ship went down, I’d be a fool not to choose Otto Penzler.

Penzler’s brick-sized Big Book anthologies form a pretty darn complete intro to genre fiction. He’s produced more than a dozen over the last decade, publishing roughly one per year since 2007. They include:

His latest is a delicious mix of gumshoe gals and debutant detectives. It was published last month by Vintage Crime. Here’s the description.

For the first time ever, Otto Penzler gathers the most iconic women of the detective canon over the past 150 years, captivating and surprising readers in equal measure. The 74 handpicked stories in this collection introduce us to the most determined of gumshoe gals, from debutant detectives like Anna Katharine Green’s Violet Strange to spinster sleuths like Mary Roberts Rinehart’s Hilda Adams, from groundbreaking female cops like Baroness Orczy’s Lady Molly to contemporary crime-fighting P.I.s like Sue Grafton’s Kinsey Millhone, and include indelible tales from Agatha Christie, Carolyn Wells, Edgar Wallace, L. T. Meade and Robert Eustace, Sara Paretsky, Nevada Barr, Linda Barnes, Laura Lippman, and many more.