Dungeons & Dragons has become a spectator game, and regularly scheduled, live-streamed D&D games are legion. The voice actors of Critical Role, led by Matthew Mercer, are probably the best known. Their weekly live game has around 30,000 viewers, and each episode gets hundreds of thousands of follow-up views on YouTube.

I do, however, have time for podcasts. In fact, between chores, the gym, and the occasional road trip, I average about fifteen hours of podcasts a week. I have a regular list of fiction, gaming, and news podcasts to fill most of that time. However, in the fall, with all the chores that must be completed before winter arrives, my regular list falls very short.

Enter actual-play D&D podcasts. There are many. Most I’ve sampled are not to my liking, but here are the few that stuck with me beyond a few samplings. 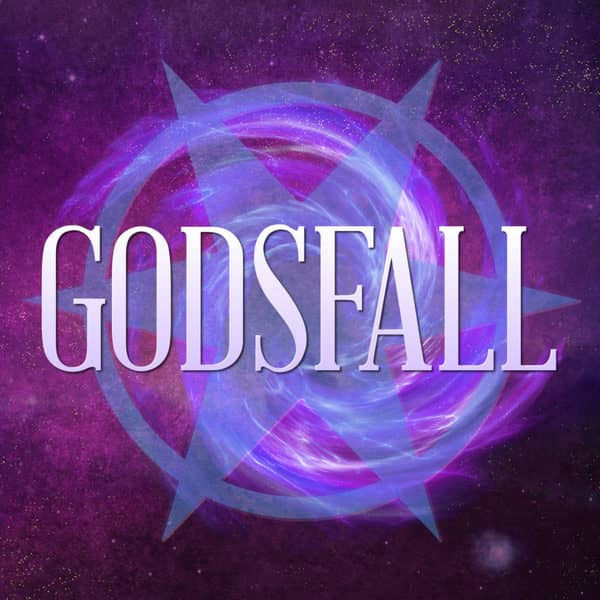 Godsfall, run by Aram Vartian, has been going for three years (with some breaks). It’s billed as a D&D/supers game. A century ago the gods killed each other off in a very short war, making most of the world a no-go place in the process. Now the gods are returning as godlings. The original PCs were your usual low-level D&D classes, but during their solo origin sessions they each discovered they also had newly awakened divine powers.

Godsfall took a while to get traction with me. I made it through the early episodes because I was stuck with nothing else to listen to. The rogue Dorro Knot finally won me over (as he has many) when, faced with overwhelming odds, he declared, “Time for a series of baaaad decisions!” It was glorious.

The podcast is heavily edited, with roughly three hours of gaming boiled down to an hour or so, but without stripping out all the banter. The heavy editing is a big plus for me, as it keeps things moving. Unfortunately, sound effects and music clips are added, and not at typical background levels. I listen to podcasts on earbuds, and my aging ears do not appreciate music and sound effects being piped directly into my ear canal.

Alas, I dropped Godsfall this year due to sprawl. As the cast has expanded and the storylines have branched, it can go for long stretches without hearing from the original characters, and they’re the ones I’m attached to. It lost me with its epicness. 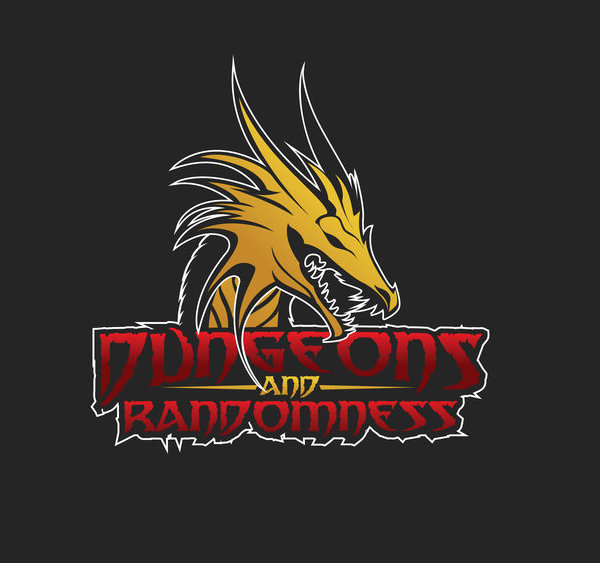 Dungeons and Randomness, run by Jason Massey, has been going for almost six years. It has multiple parties working in the same world and timeline. Their first campaign has about 400 hours of podcasts. I came in on the ninth or tenth episode of their second campaign and liked it enough to catch up on that campaign and listen to the big summary of the first campaign, plus its six-hour finale.

While the new campaign follows three parties, sprawl is less of an issue for me, as it’s done in a strict rotation, and I got to know all the characters in sync instead of focusing on one group only to have them disappear. D&R also sits down once a month for a round-table discussion with players from all three groups, which helps.

D&R has some great things going for it: a lack of PC immunity; high-stakes, intra-party conflict that pits friend again friend; and unique, fleshed-out random encounters that are outside the storylines but can have a lasting impact on them as well as add flavor to the world. These are all in my wheelhouse.

Alas, I dropped D&R after about 20 episodes. I found a few of the new PCs completely lacking in charm, and while for the most part Theria is a solid second-world, pseudo-medieval, high-fantasy setting, things like a modern-style restaurant and the equivalent of Las Vegas go a long way to killing verisimilitude for me.

Lastly — and neatly reversing the things I love about D&R — the DMing style is not for me. I’m a firm believer in adjudicating from the hip. Keep things moving. When steel is singing and mages are muttering, it’s no time for thoughtful contemplation, especially from the DM. Massey is very thoughtful in his adjudication. 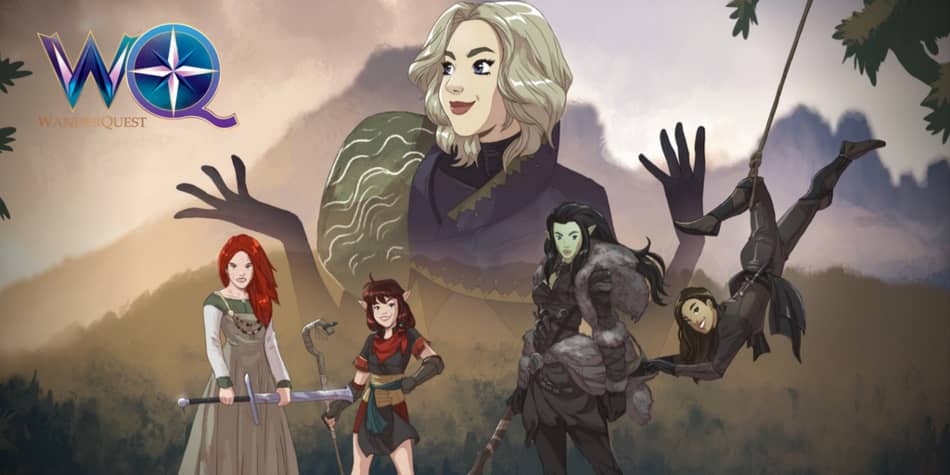 WanderQuest is part of Encounter Roleplay, which runs a bunch of streaming RGPs — more than 100 hours/month. They also have two relatively new podcasts, both of which I started with the origin episodes for the individual characters. While I enjoy some grimdark, Turncloaks was too bleak for me, and I dropped it after the opening episodes.

WanderQuest, with Sydney Shields leading an all-female cast, can also get pretty dark — conspiracy is afoot, and all the PCs have been horrifically betrayed by close family members — but it’s cut with humor. It has good character interaction and a solid melding of stories, but Frila Hayleaf, the bumbling halfling druid, reliably delivers the funny. Her incoherent babblings are hilarious, and the dice are often against her, which seems appropriate. She’s the heart of the group, partly because she wants everyone to be friends, and partly because the others can’t help but feel protective of her.

Alas, I also dropped this one due to DM pacing, although in this case it seems like more of a confidence issue than a style I don’t like. I intend to revisit in year to see if the pace has picked up. 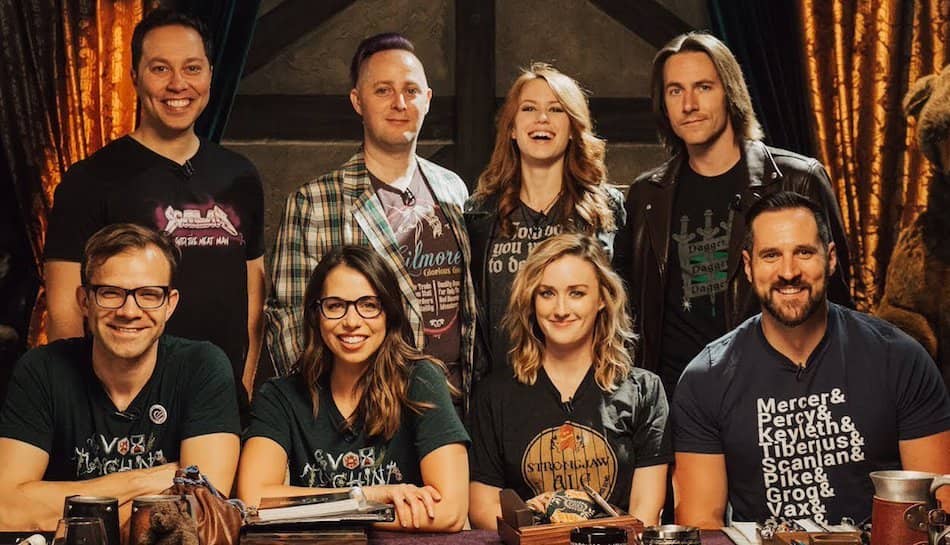 The creators of Critical Role

Yep, back to them. Their game is meant for a visual medium; however, the entire first campaign — almost 400 hours — is now available in podcast form. Pacing is less of an issue (although I could do without the mini-based action), and they are very entertaining. It’s become my go-to filler when my regular podcasts run short. Their main website is here, and the podcast is here.

Why bother listening/watching an RPG? If I can’t roleplay, at least play “what if?” as I listen. I think about what characters I might run in these games, or how some of my old characters would have responded to these situations. It scratches the itch — a little.

However, it seems I’m as picky about my group when I listen as when I’m joining them at the table. So if my brief comments here bring any other live-play podcasts to mind, please let me know. Winter is coming, and I’m listening to a lot of podcasts right now.

Jeff Stehman’s last article for us was his review of the card based dungeon-delving game CLANK!

There’s also a great podcast called Critical Hit (note, I write reviews for Major Spoilers, which is where the podcast can be found).

A devoted following and great gaming and interplay.

Robert, thanks for the link. Alas, 4e combat is not for me, but I did listen to the latest episode today, which was mercifully combat-free.

Obviously, I can’t speak to the story, but there was some entertaining banter. However, based on this one episode, I think the pace of the game would be too slow for me.