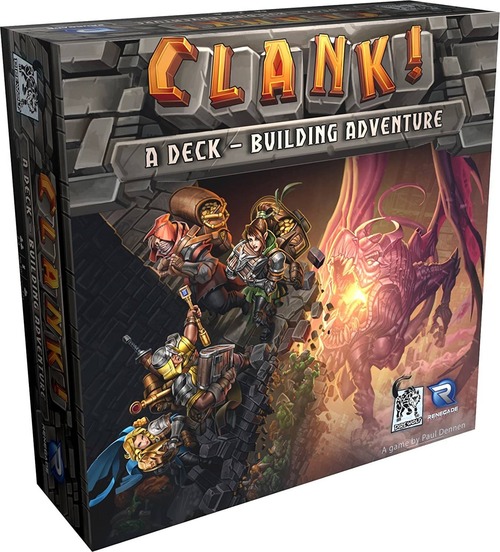 Clank! is a deck-building, dungeon-delving, push-your-luck board game designed by Paul Dennen at Dire Wolf Digital. It’s also the most fun “throw caution to the wind” board game I’ve played in a long time.

Players are thieves heading into a dungeon, challenged to see who can come back with the most loot. Bonus points if you walk out instead of getting carried, but you won’t be allowed to walk out unless you have an artifact. (And if you’re too deep in the dungeon when you tip over, the locals won’t carry you out.)

The players each start with identical decks of ten cards. A player shuffles their deck and draws five. These provide movement points to delve deeper and skill points to buy additional cards to add to their deck. There are also stumble cards that force them to add their cubes to the Clank! pile. At the end of a player’s turn, the cards they played and any newly acquired cards are discarded. Once they’ve played through all their cards, the discard pile is shuffled, and those new cards enter play.

Thus the players are building up their decks in the hopes that their draw of five cards will give them an increasing number skill points to buy better and better cards, and also to start bringing combat points and gold into their hand on a turn. (Yes, there are shops in the dungeon.) 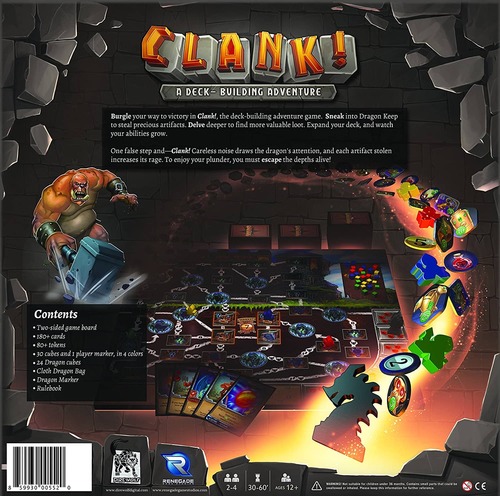 The cards available to buy consist of four standard ones that are always available, plus six cards from the big Dungeon deck. The four standards are Mercenary, which adds some combat ability to player’s hand; Explorer, which adds skill points and movement; Secret Tome, which is worth a good chunk of victory points at the end of the game but is otherwise a dead spot in the hand; and Goblin, an ever-present monster to defeat in exchange for gold. (As the Goblin cards says, “They may be short, but they’re not in short supply.”)

The other six cards from the Dungeon deck are a major source of replayability in the game. When a player acquires one or some of these six cards, others are revealed to take their place. These cards might be companions or equipment or immediate-use items. They might be monsters to fight for reward. They might cause a lot of noise and make the dragon angry until someone gets rid of them. There are 100 cards in the Dungeon deck, so there’s a lot of variety, and what becomes available during a game will have a big impact on a player’s strategy. Picking up a lot of sneaky cards? Maybe you can go deep for the big treasures. Picking up a lot of cards that let you move fast but make a lot of noise? Better not plan on staying down there long.

The board itself has two sides. One is the starter dungeon, which is respectable if orderly and easy to understand. The other is a little more sprawling and convoluted. (My first time playing it, I didn’t realize I’d moved into a dead end until I was already there.) There’s a few types of dungeon rooms, but equally important are the passages between them, which might be blocked by monsters or a locked door. The artifacts and some treasures are exposed for all to see, but there are also major and minor secrets. No telling what they are until you pick them up.

But enough about that, let’s get to the fun stuff: Clank! If a player stumbles they add a cube of their color to the Clank! pile. If they acquire a gem, they Clank! Acquire the Dead Run card, they can move fast every time they draw it into their hand, but they also Clank! Kill a Belcher? Get gold and Clank! Kill a Watcher? Get gold and force all the other players to Clank! There are also cards that allow a player to remove Clank!

The Clank! pile itself is harmless. So what’s the big deal?

There is a dragon in dungeon. This is not a monster to be fought, nor does it roam the board. It is an omnipresent threat, and players can only hope to stay below its radar or pray it doesn’t get angry.

Some cards in the Dungeon deck have a dragon icon on them. When they’re revealed, the dragon attacks. This means all the cubes in the Clank! pile are added to the dragon bag and a certain number of them are drawn out. If a player’s cube is drawn, that’s a wound. 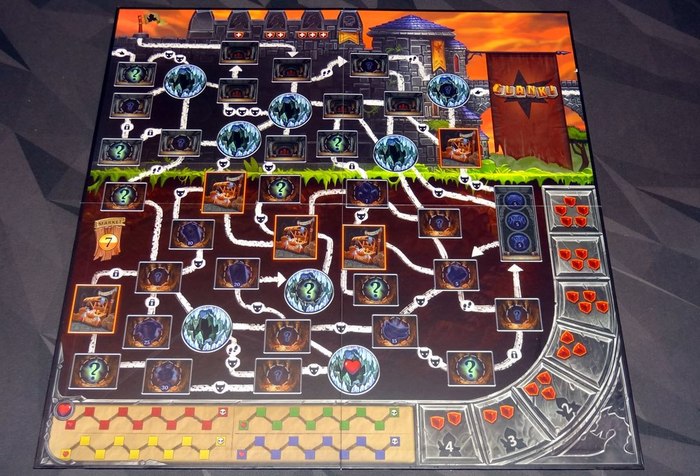 Not to worry! The dragon bag starts with 24 black dragon cubes. Draw these, and no one is harmed, so the odds of taking a lot of damage early on are low. Alas, the black cubes are usually not returned to the dragon bag, while players will continue clanking their way through the dungeon. The later in the game you are, the more likely players’ cubes are to be drawn. Also, the later you are in the game, the angrier the dragon gets, meaning the more cubes are drawn every time the dragon attacks.

This adds a push-your-luck element to the game, and it is one a player can exploit. The first player to the exit (walking or carried) starts to collapse the dungeon. Every turn they incite the dragon to attack, making it angrier and angrier, until on their fourth turn out of the dungeon it collapses, tipping over all within.

It is a valid strategy to run down, grab the first artifact you can reach, and run back out. It is also a valid strategy to go deep, spend as much time in the dungeon as you can, and load up on loot. Which strategy is likely to win? That very much depends on the individual decks the players have built. 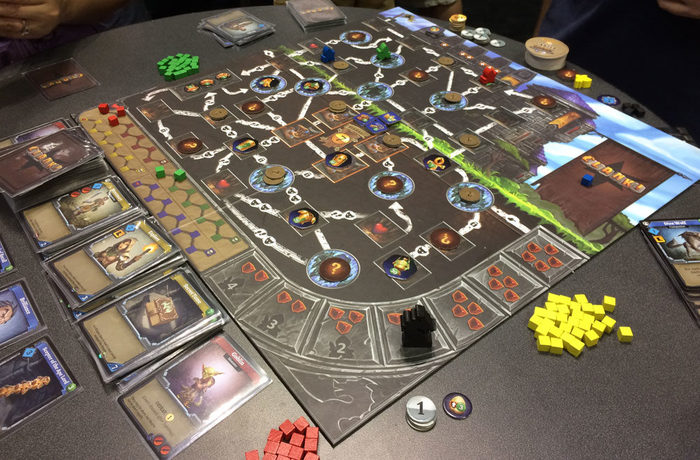 Whatever strategy you embrace, I suggest embracing it with gusto. As the verbiage on the cards makes clear, this is not a game that takes itself too seriously. The effects of the some of the cards can be a little ambiguous, and as of yet there doesn’t appear to be an extensive FAQ  for it, so try to be consistent in your rulings, plant your tongue firmly in cheek, and go for it!

Totaling victory points at the end of the game isn’t fun and can take a minute or two, as most things count toward victory points, and some cards affect how much other cards/items are worth. That is the only part of the game I found dull. (I could also do without all the exclamation points.)

So far we’ve only played this with two players. Looking forward to playing it with three or four.

Jeff Stehman’s last game review for us was Defenders of the Realm.