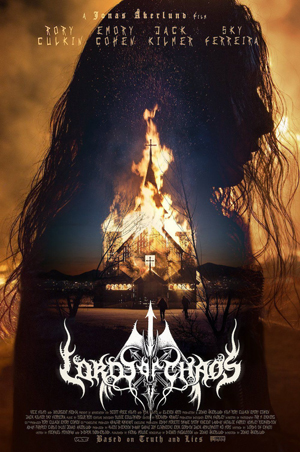 My last film of Fantasia 2018 was a late surprise. The Festival often starts with a screening slot still to be announced, as the Directors negotiate to add one last film to their line-up. This year, just a few days before Fantasia ended, they announced that they’d close this year’s festival with a screening of Lords of Chaos, a film by Jonas Åkerlund based on the true story of the band Mayhem in the early 1990s. It’s a drama, with a lot of very dark comedy, involving murder, suicide, and church burnings. The version of the film that played Fantasia was the same unrated version that premiered at the Sundance festival earlier this year; apparently cuts will have to be made before the movie can be shown again in a North American theatre. (I can’t say with absolute certainty what those cuts will be or what the reason for them is, but the leading theory I heard is that they have to do with the film’s realistic depiction of suicide.)

Lords of Chaos is based on the book of the same name by Michael Moynihan and Didrik Søderlind, with a script by Dennis Magusson in collaboration with Åkerlund. It’s worth noting that in the mid-80s Åkerlund was briefly a member of Bathory, a band that laid the groundwork for the black metal scene that emerged a few years later. Definitions are tricky in metal, and some will argue that Bathory was one of the creators of black metal; the point is that Åkerlund has roots in this world as well as being an experienced director with a long list of credits.

The film he’s made now claims to be “based on truth and lies.” Starting in 1987, we’re introduced at once to young Norwegian metal musician Øystein Aarseth (Rory Culkin), who is our narrator: “this is my story, and it will end badly,” he promises. Aarseth, under the name Euronymous, leads the band Mayhem, which has hit a plateau — but when a new singer sends in an audition tape (along with a dead mouse), Euronmymous sees new hope for the band. Per Yngve Ohlin (Jack Kilmer), who takes the name Dead, is deeply troubled but immensely talented, and Mayhem takes off, helped also by Euronymous’s knack for self-promotion: he positions Mayhem as “true Norwegian black metal,” in contrast to the proliferation of un-true Swedish death metal bands. Mayhem, he implies, is at the vanguard of a movement, harder and more unyielding than anyone else. More evil.

And so we get a moment in which an enthusiastic young fan approaches Euronymous to gush about the band, Euronymous stares at him in a long silence, then points to a patch on the fan’s jacket and reads out “Scorpions” in a flat and chillingly ironic tone. The old-school German hard rock band’s used like a bludgeon, a sign of the un-trueness of the fan, who is crushed; and we realise how Euronymous can and will pick instantly on a small tell to dominate and manipulate people around him. Because the fan, Kristian (Emory Cohen), isn’t driven away but instead becomes even more determined to gain Euronymous’s approval. Dead commits suicide, but if Euronymous is affected, he doesn’t show it much. With his parents’ money he opens a metal record store, and in the basement holds meetings of a “black circle” of favoured musicians. “I was building my own empire,” he reflects. “Everything that had happened had made me immune to reality.” Kristian, still a fan, wants to be a part of this group — for he’s a musician, too, and, it turns out, a talented one. Brought into the circle, he takes new names, Varg Vikernes and Count Grishnackh, and slowly emerges as a rival for Euronymous among the black circle. The two young men compete with each other to say and do ever more extreme things, driving each other further and further, and it is very clear that Euronymous’s early promise is true: this can only end badly. 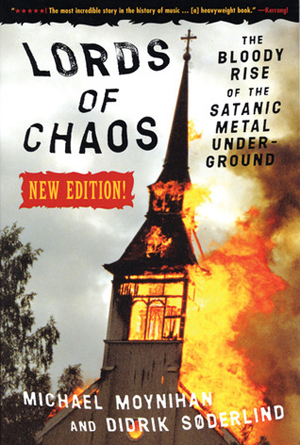 What actually did end up happening is a matter of historical record at this point. It’s a story I’ve heard and read various places, and watching it unfold in Lords of Chaos is a powerful experience. Åkerlund puts characters to names, and shows how certain notorious incidents came to pass. And he finds a solid narrative structure in doing so. Many biographical dramas and stories based on historical fact feel disjointed, a function of filmmakers trying to construct an arc to make events both cohere dramatically and fit a movie’s running time. That’s not the case here. Whether truth or lies, it is Euronymous’s story, just as he says; he’s the central figure, a character who develops in a clear arc.

I have no idea how close to reality the portrayals are, but the acting’s excellent. There’s an immersive feel to the film; the characters are familiar. You may not have met people exactly like these, but you’ve probably met people very like them. The characters speak a lot about evil and how they long to be evil, but what comes across is their youth. Young people choosing to be evil are still evil, of course, but the point is that Åkerlund brings out why the idea’s attractive to them; how ‘evil’ is bound up with a lot of other unarticulated ideas about rejecting society and establishing an identity. Choosing new names isn’t just a rock-star conceit; it’s a way of establishing a new self.

In this film, for Euronymous, to be ‘evil’ is to be more extreme than rival bands. For Varg, being ‘evil’ is a way of proving his worth, proving he’s tougher and realer than anyone else. Neither of them seem to have a philosophy any more worked out than that. Push Euronymous, and he’ll work up a spiel off the top of his head — as he does at one point in the film — about how Christianity in Norway is hurtful due to its niceness, how it oppresses people with goodness. But this is all surface, talk that comes after a pose is struck, a filling-in of justification. Euronymous is cynical in his experimentation with imagery and iconography, exploiting Dead as a musician and, later, as an icon. Varg, Kristian, is at first almost heartbreaking in his innocence, his social awkwardness, his need for approval from someone around him. But since the someone in question turns out to be Euronymous, this brings out progressively darker urges at the same time as Varg refuses to grow in either intelligence or maturity; by the end of the film he’s gone beyond any kind of sympathy while still, paradoxically, being fundamentally the same person we met earlier on.

The characters work, then, and do so because they develop. We see Euronymous grow from a cynical user of people to someone capable of maintaining a real relationship. When he first opens his record store he thinks nothing of pissing in the dingy sink; by the end of the film he’s cleaned the place up, and a nice little bell rings when the door opens. He gets tired of evil as a scam. A friend of mine pointed out how a crucial late conversation between Euronymous and Varg carefully positions a bright red Coca-Cola can by Euronymous; product placement as indicator of commercialism, all that the image of Mayhem ever really was to him. But Varg’s not bright enough to follow in Euronymous’s path of disillusionment. 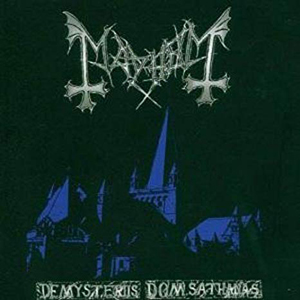 Worth noting that Åkerlund appears to have thought closely about how to depict people in this film. He’s thought about who gets mocked and how; he’s thought (I suspect) about the families of the dead. People are depicted sensitively, as three-dimensional characters, without glorifying their actions. Conversely, it’s also possible, perhaps, to see the film as a kind of debunking of the era, a corrective to any mythmaking about the scene. It’s a satire, if one that takes its characters seriously; it humanises figures who risk becoming remembered as dark legends, reminding us that these were very young men without suggesting in any way that their youth mediates the damage they did to themselves and others.

It’s also a film about their group dynamics, and about that specific kind of group dynamic, a band. In general we see the development of the characters within their crew of friends and collaborators, as well as the “black circle” Euronymous constructs around himself — another way he seeks to build his own reality. He develops in such a way that it seems he might ultimately move himself out of this community; but in a very real way the strength of what he creates is his own worst challenge. At any rate, as a movie about a band Lords of Chaos is unusual in the way it chooses to tread lightly in its depiction of the music. There have been different accounts regarding how much of Mayhem’s music the film could legally use; whatever the case, Åkerlund’s accurately observed that it’s difficult to get a sense of what’s valuable in black metal (particularly this early form of black metal) across to a general audience who aren’t already familiar with it. We do get a sense of what kind of music Mayhem plays, and even how important it is to them, and that’s enough. It’s a strong element of the film, but not a major one.

Lords of Chaos is perhaps more generally a film about what it means to construct an image for the sake of performance. Sometimes that image comes from a genuine psychological state and sometimes it doesn’t, but either way it can have great power. So here the image and the real are in tension. Euronymous narrating the film gives him a kind of final control of the story, perhaps, and certainly the story has the feel of his character: very funny, but very dark, perhaps more than he realises. In the end, though, he’s the right character to tell us this tale. It’s his story. Dead can’t distinguish between reality and his stage image; Varg chooses to be submerged within the image; it is Euronymous who exists in a nervous tension between image and real, just as he exists in a nervous tension with his own bandmates. That tension makes him complex. And it makes for a powerful movie.

I’ve often gotten the sense that the “evil” or “satanic” posture by so much of the Norwegian black metal scene is effectively a sort of crudely expressed neo-Nazis. Maybe not intentional but the spirit echoes it a lot with so much talk about the purity of true Norwegian/Viking culture and how all the damn Christians and Jews flooded in and suppressed it and you can bring it all back by making all those people and their temples disappear. The movie sounds interesting.

Oh Matt, sometimes your erudition can be sickening!

Seriously, though, this is a very fine dissection of the movie. I’m jumping in months later because I recently had the pleasure of reviewing “Lords of Chaos” for my peoples at the request of the distributors. If they’re releasing what I saw in the screener, I’m guessing that an R-rating State-Side is probably out of the question.

As you remarked, the depictions of the band members are all nuanced, even for the bit players. Rory Culkin as Øystein, though, was particularly impressive and refreshing. He’s got the look in his face and the tone in his voice that reassures me that we’ll have a new Steve Buscemi for the younger generation in case we need a back-up.

(Cheers, and I hope you’ve been well.)