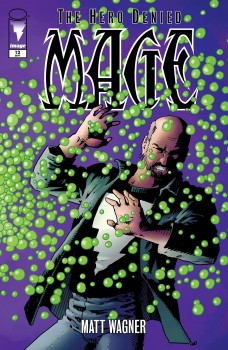 Before we begin this review, you might still be on the fence about whether or not to even start reading this series. If so, there’s a list of eight great reasons to start the series, with number 7 being the very best of them.

It opens with Magda and Hugo stuck on a platform, being attacked by snake women. Last issue, we saw Magda’s Mary Poppins umbrella trick. This issue, we see her Penguin umbrella trick as she uses it as a gun to melt two of them before another one destroys it.

Meanwhile, the Umbra Sprite takes a dip in her pool of darkness in order to gather even more power, stating that “The Three” MUST be united for the plan to work. Of course, she still has no idea about who exactly composes “The Three,” although she’s fairly sure that Kevin and the Fisher King are two of them. Before submerging, she essentially places Karol in charge, warning her that “Sasha is a vain and vapid creature” and “Zophia (is) a slave to her own cruelty.” She then informs her most trusted daughter that all four of the remaining Gracklethorns must be prepared to fight and likely to die in the coming struggle. Given that she murdered one of her daughters in the previous issue, there’s no doubt that the Umbra Sprite is prepared to sacrifice all of them to achieve her goals. It’s also clear that the daughters so fear the Umbra Sprite that they’re willing to die rather than defy her.

Elsewhere, Kevin and Miranda are pursuing the mysterious imp. Despite knocking down some trees, Kevin loses not only the imp, but also the Questing Beast, who slips through a magic portal, sealing the portal behind itself. Even worse than losing their quarry, the magic mirror that Isis gave Kevin to stay in touch with Magda has been cracked.

Sure enough, as Magda and Hugo wander through the Umbra Sprite’s lair, Magda attempts to contact Kevin through a mirror, but can only send a garbled message because Kevin’s mirror has been broken. Still, the contact lets Kevin know that his wife is alive and that she’s at least doing something to try to escape. So Kevin has a renewed resolve to find his wife and son, while Magda and Hugo blunder down random hallways until they find the inner sanctum of the Umbra Sprite, now empty save for the black pool that she had descended into earlier in the issue.

With no Questing Beast, no magic mirror, no portal to the source of magic, no imp, and no other allies making an appearance, Kevin realizes that he has to make a desperate move to contact the Mage. He reveals that he’s been using his magic debit card for decades to withdraw just enough money for himself and his family to survive. But now he’s going to push the card past its limit in the hopes of eliciting some sort of reaction. He attempts to withdraw ten million dollars from the card’s account, which brings a green bubble reaction, followed by a message that the card’s been confiscated. Now, with no source of money on top of everything else, Kevin curses the Mage for not helping.

And that’s when Mirth appears.

It’s a nice end-of-issue cliffhanger. And it mirrors the end of Hero Defined. It’s only when Kevin’s bat is destroyed in that arc that Wally Ut reveals himself to be Mirth in another form. And now with the loss of another magical crutch, Mirth appears once again. It makes sense on a certain level, that the magical tools are there to help the hero along until he’s ready to put them aside and seek true enlightenment. Once Kevin’s bat was destroyed, he learned to fully harness the power that it represented, filling a variety of objects with it and greatly expanding what he could do with the magic. Perhaps losing the debit card will allow him to tap into some other fresh power as well.

Once again, I especially love the scenes with Karol, the one Gracklethorn who understands that this is still Kevin’s story and that everyone else who ever underestimated him is now dead. Far from defying her mother, Karol is doing more to achieve her goals than any of her sisters, who seem content to follow orders and trust that their mother will do all of the heavy lifting (and heavy thinking). While the Umbra Sprite is clearly willing to sacrifice them all at this stage, it’s also clear that she considers Karol to be her least expendable daughter. And in the Umbra Sprite’s absence, Karol is clearly in charge of the operation.

Of course, with Mirth popping up at the end of this issue, many readers probably expect the remaining three issues to be Kevin and Mirth on a buddy adventure to rescue Kevin’s family, but this series has done a fine job of subverting expectations so far. There’s a very good chance that Mirth will offer some bit of cryptic advice and then pop out of the series for good. There’s also a chance that the man who appears at the end of issue 12 isn’t actually Mirth at all. We already know that there are succubi and incubi, beings who appear in the form of those whom we most desire. But that desire doesn’t always have to be sexual. In this case, the one person whom Kevin most desires to see is Mirth. … so this might be a trap.

And maybe it’s time that Kevin stopped waiting for Mirth to show up and help. Kevin is a seasoned monster hunter, a husband, and a father. He’s met all manner of people and creatures throughout his life. He already has plenty of accumulated wisdom of his own to access, without necessarily requiring a Mage to act as counsel. As far as magic goes, he has Miranda and Magda on his side, as well as his own magic. So this might be the point when Mirth tells Kevin that a Mage is no longer needed to get him through this ordeal. In fact, like the bat and the debit card, having a Mage on hand might prove more of a crutch than a tool, a vulnerable point for his enemies to focus on. At the end of the first volume, Emil ended up mocking the Umbra Sprite for believing that it was Mirth, and not Kevin, who posed the greatest threat to them.

On top of everything else, there’s also the question of Hugo eating the fairy food and how that will affect Magda’s escape plan. The two most likely outcomes (Hugo will die or Kevin will have to sacrifice himself to rescue Hugo) would both end this series on a terribly grim note. So I’m expecting (and, I’ll be honest, hoping) that Matt Wagner has some positive third option waiting that doesn’t feel like a cop-out.