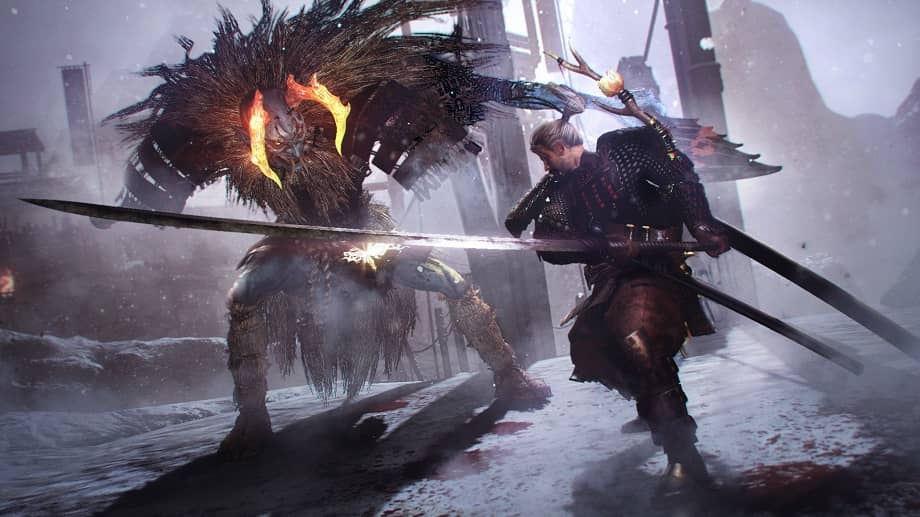 To the far east lies the land of Zipangu a land brimming with golden palaces and sparkling jewels. Kublai Khan, ruler of the mongol empire, sent a large army there, but the warriors of Zipangu used “miraculou” stones” to put up a strong defense.

Nioh is a 3rd person Action RPG created by Team Ninja, the famed creators of Ninja Gaiden and the Dead Or Alive series. In Nioh, players are faced with little direction on how to proceed in the game, open areas filled with difficult enemies and bosses, and collectibles that affect the player in many different ways.

On the surface, Nioh seems to borrow some elements from the Dark Souls series of games. Dark foreboding areas populated with enemies waiting to ambush you. Enemies that vary from humans to monsters. Enemies that have varied attacks that you must defend from and counter, forcing you to learn their patterns of attacks.

Even with those similarities, Nioh differs from Dark Souls in many ways. Nioh‘s story adopts Japanese mythology, folklore, and settings as its core. Samurai, Yokai, and many other giant monsters are set in your path. Many are unique, terrifying, and absolutely fun to battle through the use of an interesting fighting mechanic.

The dark fantasy story is mostly told through the perspective of William, a 17th century Irishman. William is lightly based on the historical figure William Adams, an Englishman who became a samurai during the Sengoku period, a period of great political upheaval in Japan.

William is one of many pirates contracted to deliver a mythical and powerful stone (Amrita) to England. England and Spain are in a war for world domination, and Amrita can give England the power it needs to win. Amrita is only found on the island of Zipangu (Japan), an island of mystery that houses many dangerous opponents.

Amrita, some call it a miraculous stone, the Philosopher’s stone… The Queen of England remains locked in combat… with Spain – the country where the sun never sets – for control of the entire world. Her forces weakening with every battle, the queen and her inner circle turned to divination and alchemy, hiring pirates like us to find Amrita for them. With that power, they managed to defeat the invincible Spanish Armada. But now it seems they want to keep their methods a secret.

The game begins in April 1598, with William in a cell in the London tower. The Queen of England has decreed that everyone involved in obtaining Amrita has to be imprisoned to secure the secret of their military might. With the help of his Guardian Spirit, Saoirse, William is able to escape his cell. From this point forward you control William, with the goal of fighting your way out of the tower, escaping England, and sailing back to Zipangu.

Nioh empowers William in many different ways. From guardian spirits, Ki, and Core Stats, Nioh allows the player to build William to fit their play style. 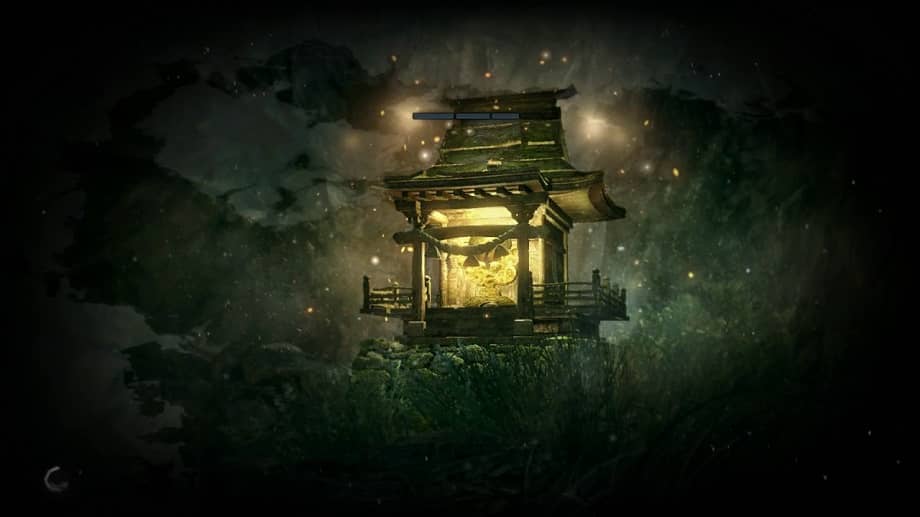 Shrines are scattered throughout the game. Shrines allow you to pray at them, creating a save point and replenishing your health.

Shrines also allow you to: 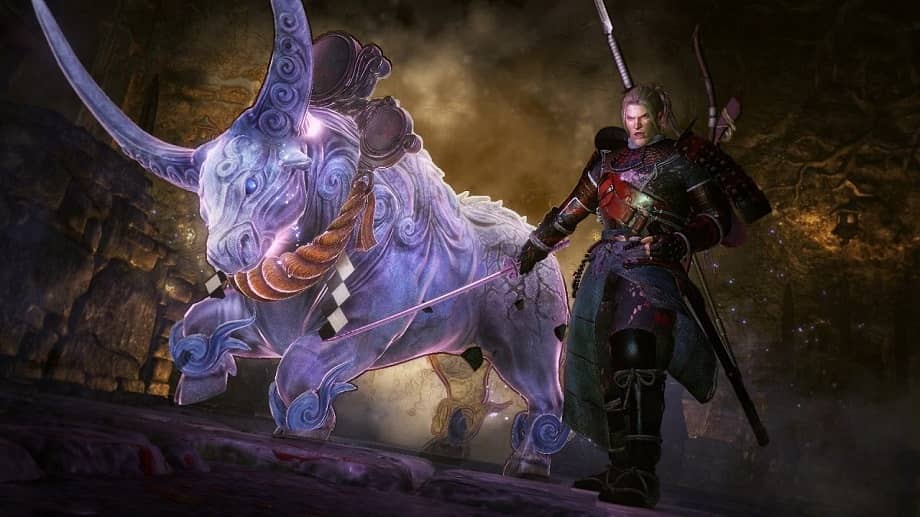 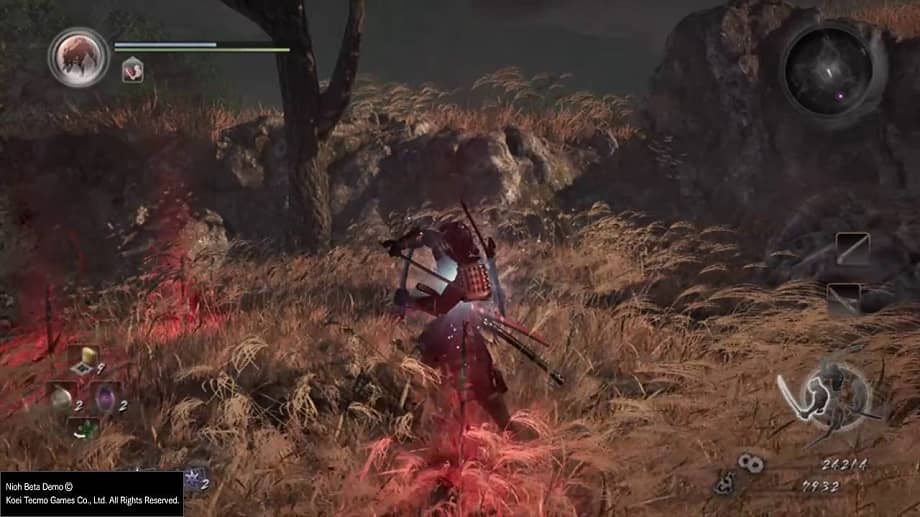 As William performs actions like running, attacking, or blocking, his Ki (stamina) depletes. If he runs out of Ki, William is defenseless against his opponents until it replenishes. William can quickly replenish his Ki by using his “Ki-Pulse” ability. The Ki-Pulse ability replenishes the stamina that was drained directly before Ki Pulse is activated. Depending on how you time using it, the replenishment could be nominal or great. 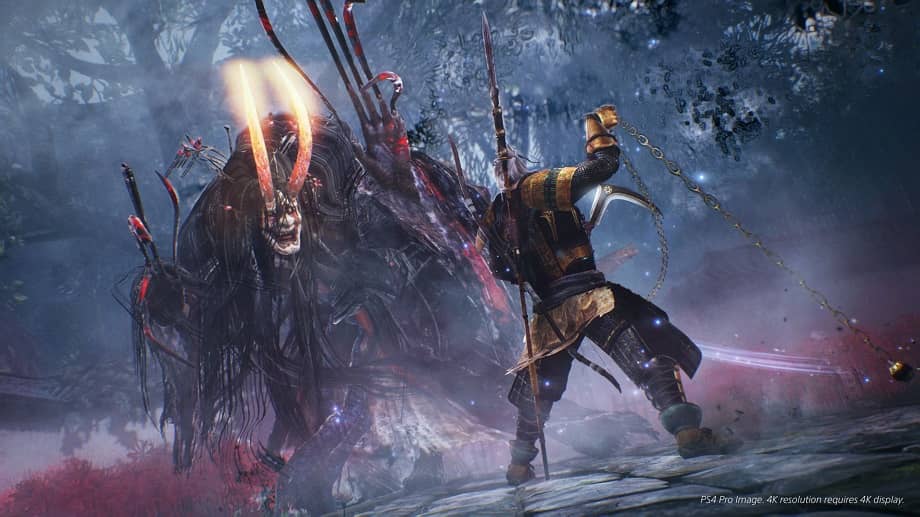 In order to become a powerful warrior capable to defeat the terrifying enemies on Zipangu, you will need to gain Amrita to increase your Core Stats. Amrita is gained by defeating enemies. Once you have gained enough Amrita, you need to return to a shrine to level up. 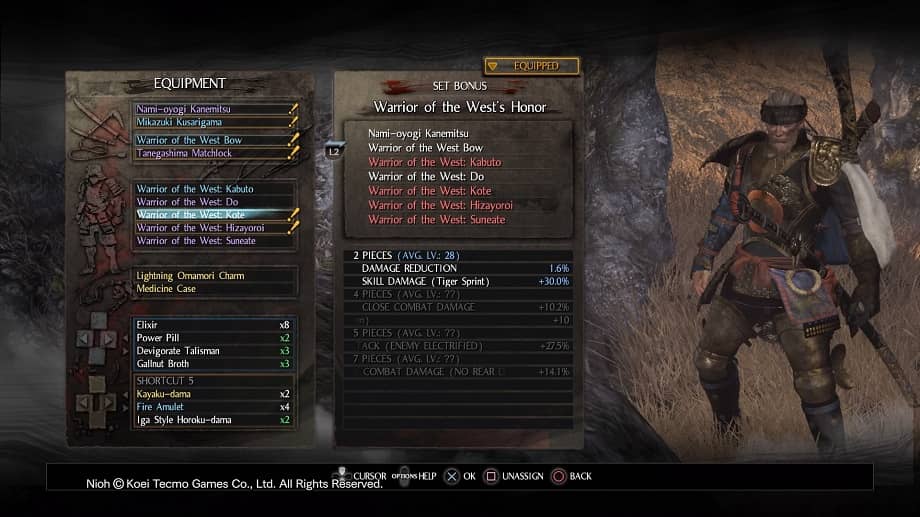 When beginning the game, you are asked one simple question:

“The samurai is master of many armaments, and trains for combat in every imaginable scenario. If I were to use another weapon, which one would I choose?”

Choose which weapon you want to wield.

Which two weapon types you pick are wholly dependent on your preferences. William can be equipped with any weapon type, even if they aren’t the the ones you picked, you just won’t benefit from the weapon attribute bonus.

Early on in the game, you are completely dependent on gaining weapons through defeating enemies or other ways. These weapons might not be the weapon types you picked, but if they are more powerful you may use them instead.

Some primary and secondary weapon type combinations are:

In addition to your melee weapons, William can also use ranged weapons such as bows, rifles, and hand cannons.

Weapons also “level up” the more you use them, which you can track by checking the Familiarity stat.

Armor, like weapons, are found throughout the world of Nioh. Armor often provides stat bonuses to attributes, but the weight of the armor counts against the amount of weight you can carry. Heavy armor might protect you more in a fight, but there is only so much weight your character can hold.

Armor and weapons can also be crafted in the Forge. 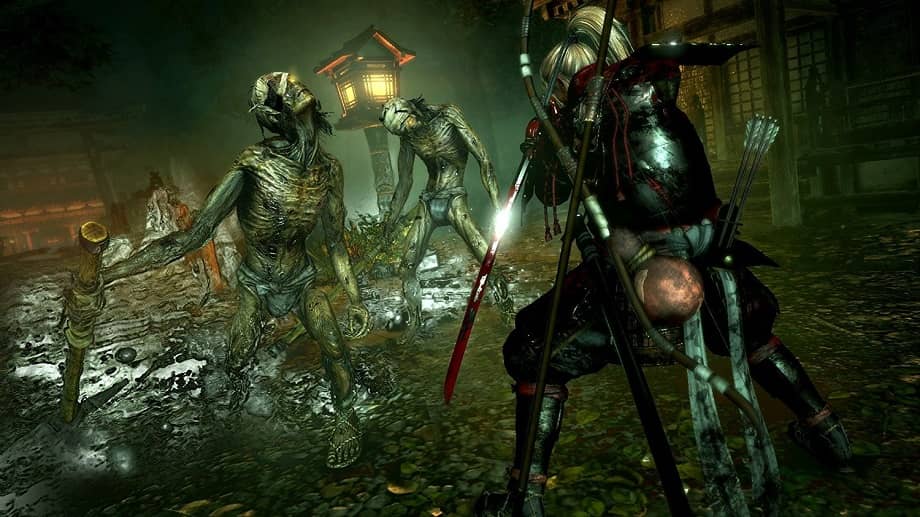 When you face an enemy, you have a choice of three different fighting stances, high, middle and, low.

You can change your stance during combat, switching between high, middle, and low will increase the amount of attacks you can launch, and also help preserve Ki. Which stance you choose is dependent upon the weapons you are using, the enemy combatant’s attacks and movement, and your health. It is also dependent on how you, as a player, like to play the game.

When battling enemies, charging into a fight is ill advised, only strategy will help you win. Attack, retreat, defend. Preserving and managing your Ki is crucial.

As you are escaping the Tower Of London, you mostly fight English Soldiers. After escaping the tower, you enter another land, a world populated with Samurai, Ninjas, Yokai, and giant demon bosses. The enemies are varied and fantastic. Some Yokai are comprised of characters that look like a walking raven (Raven Tengu), a rock wall (Nurikabe), and a Japanese cyclops (One-Eyed Oni). 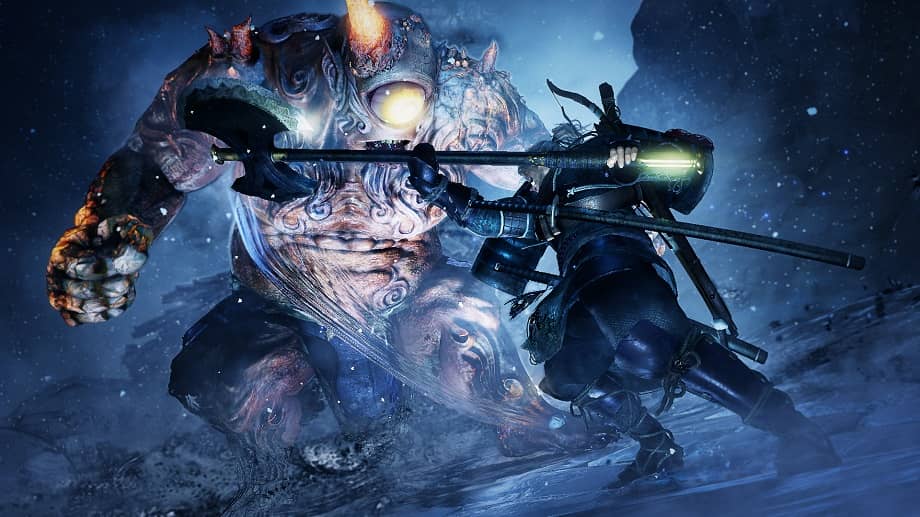 The Bosses are even more fantastical, such as Nue, a hybrid creature that combines the appearance of a monkey’s face, tiger body, and snake for a tail. The Onryoki, is a giant beast with wild white hair and flaming horns that wields two giant chained metal balls that he whips around to strike you with.

Some of the best components of Nioh are: 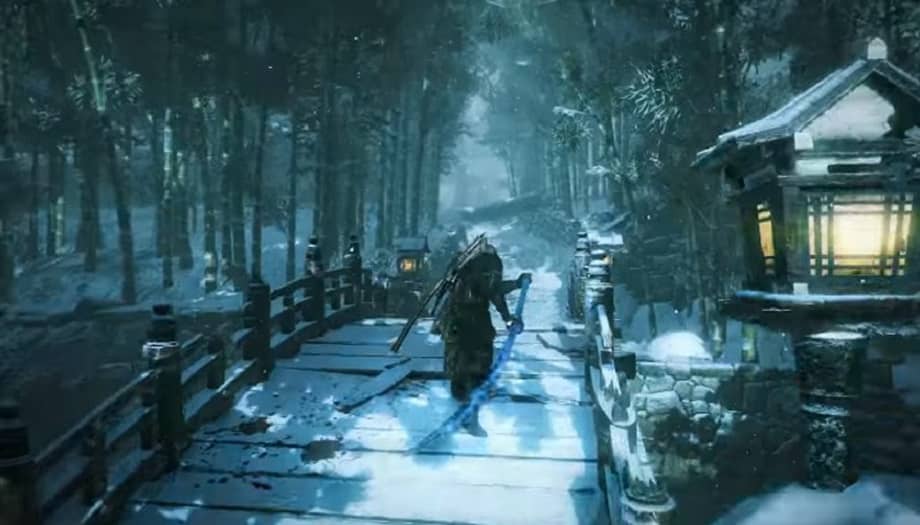 I found Nioh to be a deeply engaging game that kept me coming back for the fun combat mechanics and to see the incredible enemies that inhabited this world.

Nioh was released in February 2017 as a Playstation exclusive and was generally well received. It has since been released on Steam. Three additional DLC modes have been released for Nioh, Dragon of the North, Defiant Honor, and Bloodshed’s End. A sequel is forthcoming, called Nioh 2, with an anticipated release date of sometime in 2019.

Matt Drought lives in Milwaukee. His last article for us was E3 2018: Xbox Press Conference.