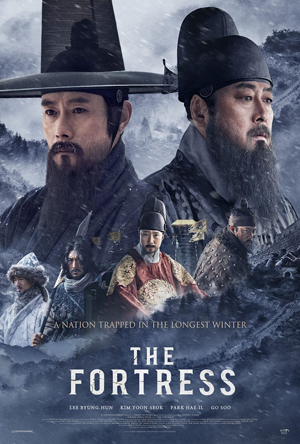 The first movie I saw at Fantasia on Thursday, July 19, was at the J.A. De Sève Theatre, a Korean film called The Fortress (Namhansanseong, 남한산성). Based on a novel by Hoon Kim, Dong-hyuk Hwang wrote the screenplay and directed his own adaptation. It’s a historical war story, set in 1636 when the Chinese Qing dynasty invaded Joseon-ruled Korea. The royal court has to flee before the Qing armies, taking refuge in a mountain castle, the fortress of the title. The Qing besiege the place, and the film follows what happens in the fortress as a result. More precisely, it follows the dispute between two of the officials of King Injo (Hae-il Park): on the one hand Myeong-gil Choi (Byung-hun Lee, who was in RED 2 and was Storm Shadow in the G.I. Joe movies), the Interior Minister who wants to negotiate with the Qing and if necessary surrender; and on the other, Sang-heon Kim (Yoon-seok Kim), the Minister of Rites who wants to hold out until the end, believing that an army’s gathering in the south that will strike north and relieve the fortress.

A blacksmith (Soo Go, The Royal Tailor) from a nearby village conscripted to serve as a soldier is the voice of the common man, while Prime Minster Ryu Kim (Song Young-chang, Kundo: Age of the Rampant) schemes to maintain his place and refuses to consider surrender. Class conflicts develop, as the court tries to keep the soldiers in line while allotting them the barest minimum of supplies needed to survive a harsh winter. Meanwhile conflicts among the court are a mix of show and threat, ministers alternately genuflecting to the King and calling for each others’ heads.

At its heart, though, this movie is about the dispute between Choi and Kim. The key is that both are honourable men, and both have deep principles informing their positions on the war. They respect each other, by and large, but are utterly opposed — with the Prime Minister a kind of wild card in their conflict. The difference between the two men is established from the very opening scenes of the movie. Choi goes alone on horseback to negotiate with the Qing, and does not flinch when they launch a flight of arrows that fall purposely just short of his mount: this establishes he’s a brave man, which we need to understand to grasp that his desire for negotiation doesn’t come from personal cowardice. Then we see a ferryman lead Kim across an icy lake to the fortress, and observe fatalistically that on the next day he’ll do the same for the Qing. Kim responds by killing him, establishing his ruthlessness but also his determination to save Joseon’s independence. 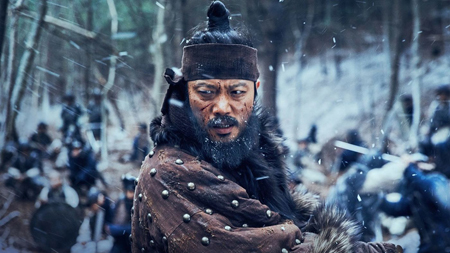 Both roles are written and performed well, with Lee in particular underplaying the cerebral Choi quite nicely. Song’s Prime Minster is rather broader, which might simply reflect the way he’s written; it’s hard to understand how this man’s sharp enough to maintain his place at court, but then we’re not seeing him in the best of circumstances. There’s a plausible argument that we should understand him as a schemer who’s adept at arranging things for himself at peacetime but is simply out of his depth at a time of national crisis — and, indeed, maybe we need to understand the Prime Minister in this way to make the conflict of Kim and Choi central. If the most important minister at court were also to have a principled stand, it would weigh too heavily in the debate. So instead we have a political hack and chancer, allowing the two leads to make their cases in equal measure.

Those cases, and the debate between them, come through very clearly in the film. I strongly suspect Hwang made a number of strong editing choices in adapting this story to film; there’s a lack of detail on the tactics of the siege, and few major set-piece battles. There are some, but this is more a historical film than a war film — the balance feels vaguely similar to Lawrence of Arabia, as an example, and that is not a film I invoke lightly. My point is that this is a 139-minute movie that doesn’t spare any extra time on information dealing with the military conflict that theoretically provides the justification for the drama. Hwang focusses intently on the conflict of the characters, on the direct causes of that drama, and on the secondary characters that illustrate the choices the characters make. It feels much shorter than its running time, an epic that foregrounds character above all. 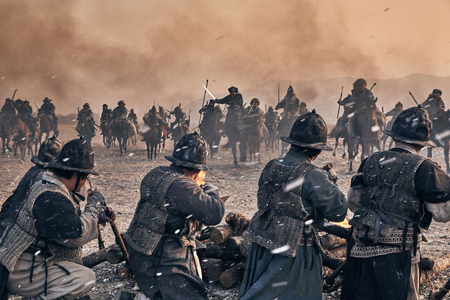 If the two characters weigh the pros and cons of survival and dignity, this feels like an issue with real thematic heft. What is the point of life? Is there something more important than simply survival? Is it better to live through humiliation, or die with some kind of integrity rather than compromise one’s values? The film explores these points thoroughly, and I wonder if there’s a symbolic value to the fact that one of the sides here is taken by a Minister of Rites. So far as I can tell, this Minister would be responsible for diplomacy — but also for ceremonies, for traditional forms. There is a tragic overtone to this film, and I don’t think it says too much to say that it concludes with a ritual.

Visually, this is a beautiful film. There’s an elemental starkness to it; you can feel the cold just by watching it, just by seeing the character of light and the smoke of someone’s breath. The lighting’s spectacular, textured and nuanced in a way that feels oddly pensive. The camerawork’s unobtrusive but always precise, focussing on the actors in their intense dialogue scenes and pulling back to show outdoor vistas as needed. Scenes in the court feel cramped, tense, the ministers often shot from below as they kneel; usually that makes a character look larger-than-life, but here it emphasises their subordination, the tension of their physical and social positions. Again and again the ministers must accept some kind of rebuke or humiliation, as though in a miniature of what the Qing want to inflict on the nation at large. Only, sometimes they can deflect a punishment onto someone lower down the hierarchy. 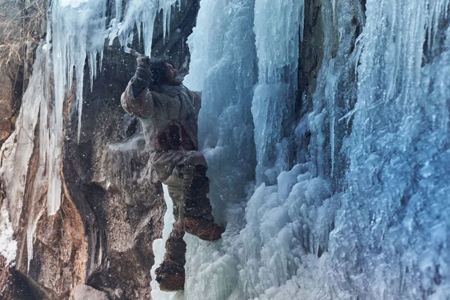 Hwang plays this, too, to good effect. We see the corruption of the court, but are not so disgusted we want to see it swept away. Soo Go’s blacksmith is crucial, here, reminding us that there’s more to this kingdom than the court: there are the people, and seeing things through their eyes we get a whole new sense of the scale of the conflict and how it affects everyday life. Is the cause of preventing a king’s humiliation so important for them? Should it be?

There’s a sense in which some of the same principles animating this conflict, and Joseon resistance to the Qing, are still driving international politics today — nations that don’t want to lose face, nations that want to demonstrate the strength of their will to exercise power. But you can also see the themes at work in individual lives. I have no idea how closely this film sticks to actual Korean history, but as a narrative I think it succeeds grandly. It’s intelligent, well crafted, and speaks to life as it is lived. In all, this is a grand achievement.