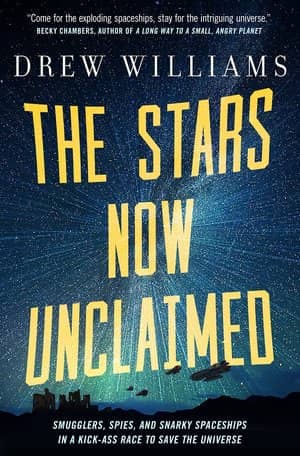 Drew Williams’s fiction debut The Stars Now Unclaimed sounds like just what I’m looking for in my late-summer reading: a colorful far-future space opera. Here’s a snippet from the Publisher’s Weekly capsule review:

Williams’s sarcastic, trope-filled debut is a science fiction adventure that never takes itself too seriously. Jane is a human member of the Justified sect who’s trying to make up for what she views as the worst thing she’s ever done. A few generations ago, the universe was hit by the pulse, a weapon that destroyed all other weaponry. It got out of control and set planets back technologically, leaving some without even electricity. Jane’s sect was the one that released it, with her help. Now she’s trying to right her wrongs by traveling to different planets to find kids who have gained powers because of the pulse… it’s an enjoyable ride full of dry humor and thrilling action scenes.

Jane Kamali is an agent for the Justified. Her mission: to recruit children with miraculous gifts in the hope that they might prevent the Pulse from once again sending countless worlds back to the dark ages.

Hot on her trail is the Pax — a collection of fascist zealots who believe they are the rightful rulers of the galaxy and who remain untouched by the Pulse.

Now Jane, a handful of comrades from her past, and a telekinetic girl called Esa must fight their way through a galaxy full of dangerous conflicts, remnants of ancient technology, and other hidden dangers.

And that’s just the beginning…

The Stars Now Unclaimed is the opening volume in the Universe After series. Read Chapter One at Tor.com.

The Stars Now Unclaimed will be published by Tor Books on August 21, 2018. It is 448 pages, priced at $24.99 for the hardcover and $11.99 for the digital edition. See all our coverage of the best upcoming SF and Fantasy here.