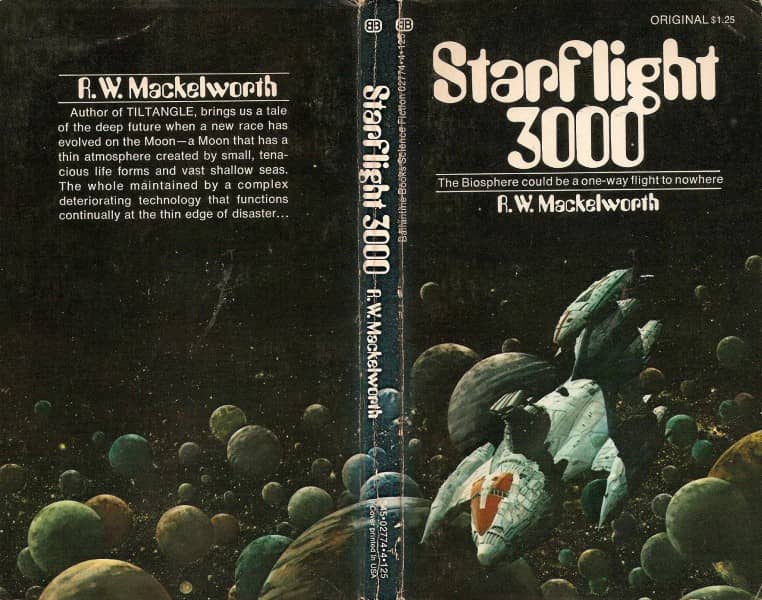 While perusing the shelves of Bookdealers of Rosebank, in Johannesburg, an excellent shop that sadly closed its doors a while back, I came across a nondescript book with an unbent spine. Finding a used paperback of any age with a good-as-new spine is a rarity, and I was drawn to it.

I slipped it from its recess and took a closer look. It was a Ballantine paperback with an intriguing space ship on a wrap around cover. The title was Starflight 3000 by R.W. Mackelworth.

I had never heard of Mackelworth, but then again I am not the best informed on science fiction authors. While I was impressed with its pristine condition, it also set off some warning bells. Why was it unread? Was the story that bad? But hey, nothing ventured, nothing gained. And besides, it was a very reasonable price. I bundled it with some other selections and headed to the cashier.

Starflight 3000 was published in 1972 by Ballantine Books and has been reprinted at least once, in 1976 by New English Library. Ronald Walter Mackelworth (7 April 1930 – 15 January 2000) was an English author of a small number of SF novels and short stories. A bit of research indicates he wrote part time while holding down a full time job selling insurance, hence his rather modest output (five novel and about 20 short stories).

Mr Mackelworth started off, as many authors do, with short stories in the early 1960’s, before publishing his first novel Firemantle in 1968 (later reprinted under the title The Diabols). Four more novels followed, the last (and by appearances his final foray into print) being Shakehole, which appeared in 1981.

The cover of the Ballantine edition was painted by Christopher Foss; it depicts a spaceship with an almost crocodilian appearance. I was impressed enough to do a bit of research on Foss too, and I quickly recognised some of his works — his talented renderings of spaceships and robots has adorned many a book, including several by Asimov and Vance.

The rear cover of the Ballantine edition reads:

R.W Mackelworth, Author of TILTANGLE, brings us a tale of the deep future when a new race has evolved on the Moon – a Moon that has a thin atmosphere created by small, tenacious life forms and vast shallow seas. The whole maintained by a complex deteriorating technology that functions continually at the thin edge of disaster…

The story opens in the distant future, around the year 3000 on the Moon, which has long been settled and now sports a proto-atmosphere. We soon learn that there are two factions with a long enmity for one another, Milcon and Polcom. Before long Milcom establishes themselves as the bad guys, by causing the death of an important character in the first chapter. Events quickly drag our main character, Boldre, into action; Boldre would otherwise have been quite content to stay clear of the political machinations at play.

Boldre is an Islander, one of a group of freeholders who form a sort of autonomous collective free from the control of the Milcom establishment that runs the Moon’s cities. The Islanders are the “new race” of men spoken of in the blurb. People who have lived on the moon for generations, evolving and adapting to become masters of their unique environment.

Finding himself obliged to complete the task his dead Islander brother set him, Boldre is swiftly swept up in an intriguing plot to liberate an ancient artefact enigmatically known as The Griffin from Miclom’s moon fortress. Other plotters join him, and it is not long before we realize that strings are being pulled to manipulate events.

Meanwhile, Polcom has for the past few hundred years being fitting out a massive asteroid they have towed into Earth’s orbit, hollowing and building until it has become a self-sustaining Biosphere, fitted out with various environments simulating those of Earth, Mars and the Moon respectively.

This is where the book takes a figurate leap into relativity. While the opening section was action packed, with events unfolding in rapid succession, Boldre’s arrival on the Biosphere and its subsequent launch to establish colonies in the distant stars, slows the action considerably. While things happen in the Biosphere, the pace is different, jumping from period to period. While in turn, the speed the Biosphere is travelling introduces time dilation, so that months equate to years, perhaps centuries, on Earth.

That is not to say The Biosphere is travelling at hyperspace speeds. Time does pass and new generations are born as other pass on, while all the time there are political machinations as the author drops snippets of who Polcom and Milcom really are, the state of Earth, the purpose of The Griffin, and also the ethics of colonising other alien worlds.

While it was an enjoyable story, I was left with the feeling that Mr Mackelworth was attempting to impart an important message that I did not quite comprehend. The concepts he introduced were often clever, with solid characters. That said there is a vagueness about the book. Certain people’s motivations are alluded to but never spelled out. I had questions which were never satisfactorily answered.

As a random read just for the fun of it, one could do far worse than Starflight 3000. Would I seek out other books by RW Mackelworth? Probably not. If one were to tumble into my hands however, I would doubtless give it a read.

Tony Den is an occasional contributor to Black Gate. His most recent articles include the coverage of Ace Double D-427 by Robert Moore Williams and  a review of The Arcipelago Kickstarter Reward.

I like that first (Chris Foss) cover — it almost looks like it comes from an SF equivalent to the Ballantine Adult Fantasy series.

Well put — and very true. And wouldn’t THAT have been something??

Too true Joe, got to love those Ballentine Adult Fantasy wrap around covers.