It’s a short roundup this month, with only Swords and Sorcery Magazine from the pack of usual suspects. There is a special treat, though, making up for the lack of magazine stories. Multi-talented Robert Zoltan has created another wonderful audio adventure with his series duo, Dareon Vin and Blue.

Swords and Sorcery Magazine #76 has the publications’s usual two stories. One I don’t like, one I sort of like. I’m sorry, but I just can’t like everything.

The opening story, “Remnants” by Lynn Rushlau, is the one I don’t like. Returning from a night of revelry at the Festival of Liberation, Callery hears a voice in her home and runs screaming. Over the next week, she begins to see ghosts, lots of ghosts.

These aren’t human ghosts, but those of the Fairies who once ruled over all humankind. The best single part of the story is the description of that era.

Her hand lingered over the rebel costume. She could use some of the courage of her ancestors. They’d risen up three centuries ago and destroyed the fairies who’d kept humankind enslaved for untold millennia. Literally untold. Human history survived as rumor and tall tales. Nothing written went back before the Rising.

Unfortunately, there’s nothing else in the story with as much resonance. It’s easy to call the story out for not being heroic fantasy, but that isn’t the author’s fault. My problem is that the story feels pointless. When a central mystery is revealed, the motive behind it is vague, and then no space is given to exploring its ramifications.

The second tale, “Spellbreaker” by Dan Morely, is definitely sword & sorcery. He’s created a setting that’s detailed and has potential for future stories. Unfortunately, a clear narrative doesn’t emerge from a tale that attempts too much.

Ivar Felstone wakes up beaten and robbed, the victim not of run-of-the-mill bandits, but of a labor dispute among mercenaries. Following the recent battle of Averine Hill, most of the mercenary companies within the unnamed empire were wiped out. A majority of the surviving mercenaries have banded together in a single guild. Those, like Ivar, who don’t join are blacklisted.

There are complex plots-within-plots behind the disaster for the mercenaries at Averine Hill and the rise of the new guild. There’s good stuff here, really good stuff. Morely has set out a deeply complicated series of events. The problem lies in it all being too complicated for a story of “Spellbreaker”‘s length. Undeveloped characters have tremendous bearing on the proceedings, and keeping track of what’s transpiring is difficult. What leads to what isn’t always clear. Still, I like the story’s atmosphere of duplicity, and would read more by Morely.

Robert Zoltan is a writer, a musician, a visual artist, and, as his new audio presentation makes clear, an actor of no mean talent. In 2016 he crafted a wonderful audio version of his story “The Blue Lamp” featuring his duo Dareon Vin and the pseudonymous barbarian, Blue, collectively known as the Rogues of Merth. It’s a lot of fun and I said so in my review here at Black Gate back in late 2016. 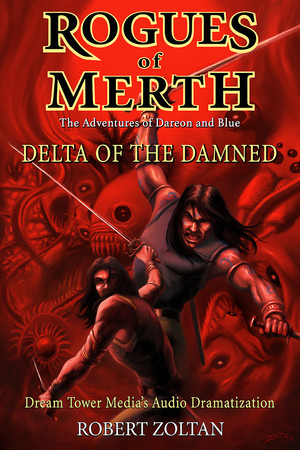 Now he’s made another, “Delta of the Damned.” Again, it stars Dareon Vin and Blue. This time they’ve hired on to protect the crew of a cargo ship traveling “through the sludge of the Regara River delta.” Zoltan brings this to life with the sounds of water sloshing against the ship’s sides, the irritating buzz of insects, and an ominous soundtrack.

Zoltan performs as Dareon, the POV character. He has a pleasant voice and succeeds at making the poet-swordsman sound curious and self-assured. Kori Wilson has less to do as the more laconic Blue, but he still makes him sound big and dangerous. Wilson also does the voices of the ship’s captain and crew with great gusto.

“Delta of the Damned” has a different feel than “The Blue Lamp.” Instead of focusing on the interplay between characters, in this tale Zoltan concentrates on creating a thick, oppressive atmosphere that weighs his characters down. He also builds a sense of foreboding as Dareon and Blue are dragged further along into darker and more dangerous events against their wills.

Both of Zoltan’s productions are solidly produced. The acting, the sound effects, and the music are all professionally done. It’s the story, though, that makes this worth forty minutes of your life. If it wasn’t good, all the production values in the world wouldn’t make “Delta of the Damned” worth sitting through. Zoltan brings a good understanding of the sorts of things that make S&S work: memorable characters, atmosphere, action, and monsters.

You can listen to both “The Blue Lamp” and “Delta of the Damned” on Spotify. If, like me, you have felt let down by every S&S movie ever made, this is proof that the genre can indeed be successfully brought to life.

Fletcher, thanks so much for your wonderful review. It’s very gratifying to have someone perceive the value of these audio dramas (and the stories themselves) after the tremendous amount of time and work spent to create them.

FYI, people can also listen to the dramas on iTunes and YouTube, and anywhere else that Literary Wonder & Adventure Show is available. Go to http://www.dreamtowermedia.com/podcast for all the links. Cheers!

@Robert – You’re welcome! Thanks for telling all the other places folks can hear it.