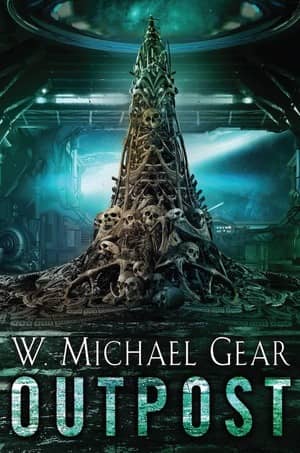 Any fans of Deadwood out there? I’m still pissed at HBO for canceling it (and really hoping these rumors of a movie pan out) because I’m a sucker for stories about “the frontier.” I fully accept that the American frontier in the Old West or the Age of Exploration or basically anytime one culture expanded into a new part of the globe, it was far from some Golden Age. But those time periods are interesting. Take people away from what they know and stick them somewhere totally alien, and the way they adapt and survive and either come together or kill each other has so much potential for great storytelling.

This is the part where I say “And this next book is no exception,” since I had a blast reading Outpost, the start of W. Michael Gear’s Donovan trilogy (and the first novel of his I’ve read). The setting is very Deadwood meets Avatar, set on a frontier colony that hasn’t been resupplied in almost a decade, on a planet filled with bizarre creatures and plants ready to kill the careless or unfortunate. Add in a bunch of new arrivals when the next resupply ship finally shows up, and what you get is an immediate clash of cultures between the freedom-loving colonists and the representatives of the Corporation, which basically runs Earth back home (maybe there’s some Firefly in here, too). Overall, the running idea with a lot of the main characters is the possibility of either losing yourself or remaking yourself in the frontier, with arcs that are diverse and often surprising.

One thing that Outpost also has going for it is the number of female protagonists, which is great in a subgenre that’s traditionally male-dominated (I feel like we’re saying that a lot these days, but it’s true and it’s awesome). But I also noticed immediately that a lot of these female characters are quickly and frequently sexualized and/or objectified by the male characters around them. That threw me out of the story a bit, since at the same time characters like Talina Perez and Supervisor Aguila are nuanced, badass and/or self-sufficient; I’d be very interested in the opinion of a female reviewer here*, to see if I’m being overly cautious (since this is something I try to be very careful with in my own writing) or there is anything problematic.

But that’s only one concern in a novel that was a blast to read. The world-building is amazing, there are echoes of contemporary political and economic conflicts, and an air of mystery that doesn’t take away from a story that feels complete. I really want to find out what’s going to happen on Donovan in Gear’s next book, which is slated for November 2018.

An Ottawa teacher by day, Brandon has been published in On Spec, Third Flatiron Anthologies, and elsewhere. If you like time travel stories, check out the Kickstarter for TIMESHIFTS, which includes Brandon’s short story “Moments” from Daily Science Fiction and work by Cat Rambo, Kevin J. Anderson, and more:

*I’m serious about wanting a female reviewer’s thoughts and would appreciate comments below or tagging this review for some female critics out there.