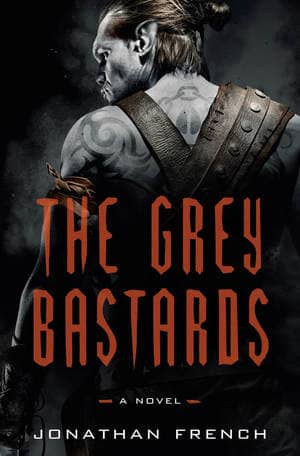 I find it fascinating how buzz can grow for certain books, weeks and even months before they’re published. I’m talking about real buzz, grass-roots stuff, reader reviews on public sites, not just high-profile blurbs on the back of the book.

I was flat-out astonished to see the early buzz for Jonathan French’s orc epic The Grey Bastards, coming in hardcover June 19 from Crown. Nearly three weeks from publication it already has 54 reviews at Amazon, and a whopping 473 ratings at Goodreads. That’s off the charts, especially for an unknown author with only two previous small press releases to his credit. It wasn’t until I dug a bit deeper (and had already selected it to feature today) that I realized the Crown edition is a reprint of a 2015 small press original from Ballymalis Press. Still, that’s plenty unusual all on its own, so I decided to go ahead and feature it today anyway. Here’s the description.

Call them outcasts, call them savages — they’ve been called worse, by their own mothers — but Jackal is proud to be a Grey Bastard.

He and his fellow half-orcs patrol the barren wastes of the Lot Lands, spilling their own damned blood to keep civilized folk safe. A rabble of hard-talking, hog-riding, whore-mongering brawlers they may be, but the Bastards are Jackal’s sworn brothers, fighting at his side in a land where there’s no room for softness. And once Jackal’s in charge — as soon as he can unseat the Bastards’ tyrannical, seemingly unkillable founder — there’s a few things they’ll do different. Better.

Or at least, that’s the plan. Until the fallout from a deadly showdown makes Jackal start investigating the Lot Lands for himself. Soon, he’s wondering if his feelings have blinded him to ugly truths about this world, and the Bastards’ place in it.

In a quest for answers that takes him from decaying dungeons to the frontlines of an ancient feud, Jackal finds himself battling invading orcs, rampaging centaurs, and grubby human conspiracies alike — along with a host of dark magics so terrifying they’d give even the heartiest Bastard pause. Finally, Jackal must ride to confront a threat that’s lain in wait for generations, even as he wonders whether the Bastards can — or should — survive.

Delivered with a generous wink to Sons of Anarchy, featuring sneaky-smart worldbuilding and gobs of fearsomely foul-mouthed charm, The Grey Bastards is a grimy, pulpy, masterpiece — and a raunchy, swaggering, cunningly clever adventure that’s like nothing you’ve read before.

Looks interesting. More of a proper orc fan myself, have an issue with half this half that, while sill having no problem suspending disbelief to accept Orcs etc in general, bit of an oxymoron I suppose. Needless to say it will be added to my wish-list.

The seventh Song of Ice and Fire book has 1092 ratings and 60 reviews, and the sixth book isn’t even finished yet.

I have not, though I’ve heard good things.

Have you read Scott Oden’s A GATHERING OF RAVENS?

> The seventh Song of Ice and Fire book has 1092 ratings and 60 reviews, and the sixth book isn’t even finished yet.

!! Holy cats. Is that on Goodreads?

This really was a fresh take on the fantasy zone. With a good range of interesting characters and a intricate and inspired plot it had the complexity to impress! I just hope that the next one will be in the same league, because, usually, with the second book it`s way trickier to achieve the same greatness as the first…
Like you said, this was published under a small press and now it will come out at a bigger one and solely this fact speaks for the huge potential of this series.

John – not yet, but A Gathering of Ravens is on my ever growing “books to read list”. What this article had done is inspire me to get Stan Nicholl’s second orc series off the shelf to read.