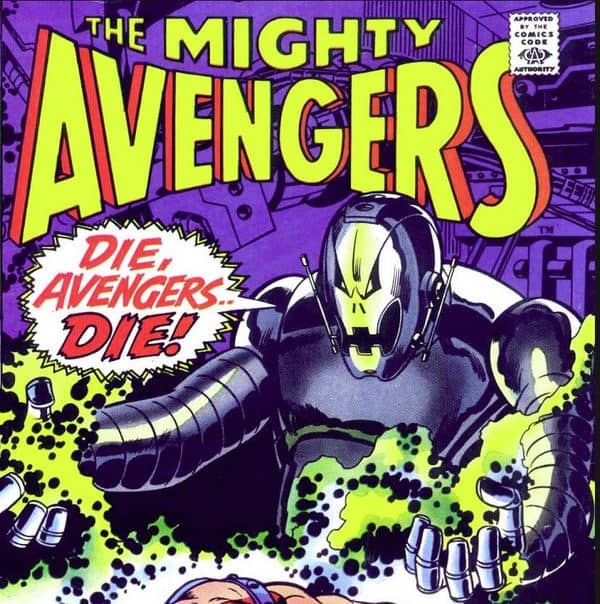 With the entire world counting down to an imminent and inevitable event that may shake the entire world and light up Twitter like nothing previous – no, not a Trump impeachment, but the premiere of Avengers: Infinity War – an Avengers robot column may be the only thing to soothe and distract the hordes long enough for the rest of us to stock up on survival gear, water, and dark chocolate.

For that I need to go back one movie to Avengers: Age of Ultron. Every good comic historian knows the origin of Ultron. He’s introduced in the pulsating pages of Avengers #55 (August 1968) as Ultron-5 and his back story is laid out in delectable detail in Avengers #58 (November 1968). Some indefinite time in the past Hank Pym – Ant Man, Giant Man, Goliath, Yellowjacket, pick one – was noodling around in his workshop tinkering with “a crude but workable robot .. A faltering step on the path to synthetic life!” For reasons never explained, the robot turns itself on and its brain evolves from infant to adult in a matter of magnificent moments, giving it more daddy issues than all the Miss Golden Globes titlests combined. He, now definitely a gendered he, blanks Hank’s memory while he spends time off-page continually upgrading his body so that when readers get their first glimpse he introduces himself as Ultron-5.

NOTE: This article was updated on September 21, 2018 for a vital correction. See the addition of the Ultimate Ultron below.

Roy Thomas had taken over the writing reins of the Avengers and he had a thing for robots. He would bring back Ultron iterated to Ultron-6 in 1969, just one month after he tormented the X-Men with Mark II Sentinels. The source of Ultron’s name is easy to guess. In Philip Nowlan’s “Armageddon 2419 A.D.,” Anthony Rogers (not yet Buck) encounters two magic metals produced by ultronic waves: inertron, used for anti-gravity, and ultron, an “absolutely invisible and non-reflective solid of great molecular density and moderate elasticity, which has the property of being 100 percent conductive to those pulsations known as light, electricity and heat.” Marvel would introduce its own two magic metals, pulsation-damping vibranium and impregnable adamantium in this same period, with the first mention of vibranium in Avengers #66, used for Ultron’s upgrade. How do you defeat a robot whose body can’t be scratched? By letting him explode under a vibranium dome. All the pieces fit together so neatly.

In usual practice, Stan Lee let his artists design the villains, mostly because who could ever tell Jack Kirby what to do? Thomas worked with the presumably more tractable and, IMO, equally great John Buscema, so he gave Buscema his mental conception of Ultron. Thomas, you might remember from your class on comics history (taught in every school today, I fervently hope), was among the great fans of the first generation of comics professionals who grew up reading the stuff. His head was a graveyard of thousands of dead heroes and villains from an earlier generation when fifty cents bought home five 36-page issues. He put one and one together and made Ultron-5.

In an interview with Karen Walker that ran in the appropriately-titled fanzine Back Issue: The Retro Comic Experience Thomas said,

I’d based my idea of [Ultron] on a villain-robot called Mechano (I think that’s the spelling) in an issue of Captain Video… and he looks a lot like Ultron so I must’ve sent a picture of him to John. Later, when Sal Buscema drew the climax of his second appearance, I sent Sal a 1950s issue of the ME comic The Avenger with its robot, for the body.

I knew I had to track Mechano down. I also knew these were 40-year-old memories talking, since the interview ran in 2010, so I couldn’t count on any of it being accurate. To the Researchmobile! (Based on the short-lived Spider-Mobile, not the one from the Dreaded Competitor.)

Now we hie to the Captain Video vaults. Sure, Captain Video and His Video Rangers is the pioneering television science fiction series. Merchandising and marketing were postwar impulses just as strong and nearly as lucrative as those today. Captain Video stuff was everywhere and that included six issues of a Captain Video comic book published by Fawcett in 1951. No Mechano anywhere, but the cover of Captain Video #3, June 1951, teases  us with “The Indestructible Opponent.” Visions of adamantium dancing in my head, I turned to the splash page to encounter a figure blazing with fire and Captain Video exclaiming, “He’s still alive! There is something weird and uncanny about Makino!” Makino? Close enough. 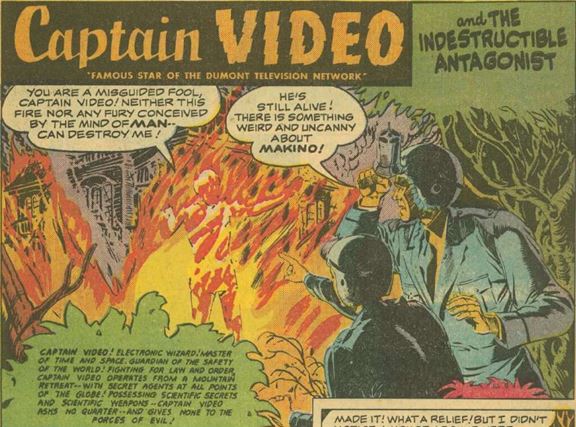 Someone – or something – is killing noted scientists, so Captain Video travels to a secluded laboratory where a dying professor is tended by his assistance, his face swathed in bandages. Could it be? Yes.

Makino escapes and continues tracking down the greatest scientists and subjecting them to trial by intellect, killing them when they can’t answer his questions. Captain Video’s ray gun has no effect on a body constructed of an indestructible alloy.

The only way to a robot’s heart is through its ego. Captain Video challenges him to a wits-off, an “intellectual duel to the death.”

What can Captain Video ask that a robot cannot answer? He strikes at robots’ perpetual Achilles heel: their inability to understand human emotions. 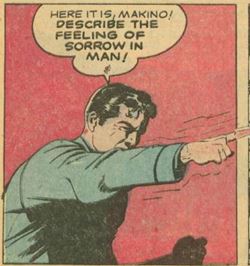 Makino crumbles at the thought of defeat.

I would have gone for, If the town barber shaves all those who do not shave themselves, who shaves the barber? but six of one and all that.

Makino’s face is definitely reminiscent of Ultron’s. With that locked down, let’s turn to the stupefyingly ironic title The Avenger.  Thomas’ mention of ME refers to Magazine Enterprises, a decidedly fourth-rate comics publisher that isn’t known for superhero comics at all and in any sane world won’t have launched a new title with one in the superhero death valley of 1955. The Avenger is only nominally a superhero, one of the hundreds of non-powered costumed do-gooders the Golden Age spat out, his only gimmick his Starjet, an atomic-powered propeller-rocket plane that is called “fifty years ahead of its time.” He’s avenging the death of his brother at the hands of the Commies, if you must know.

It’s also in his third issue, out of four, that he battles a robot, drawn by Bob Powell. 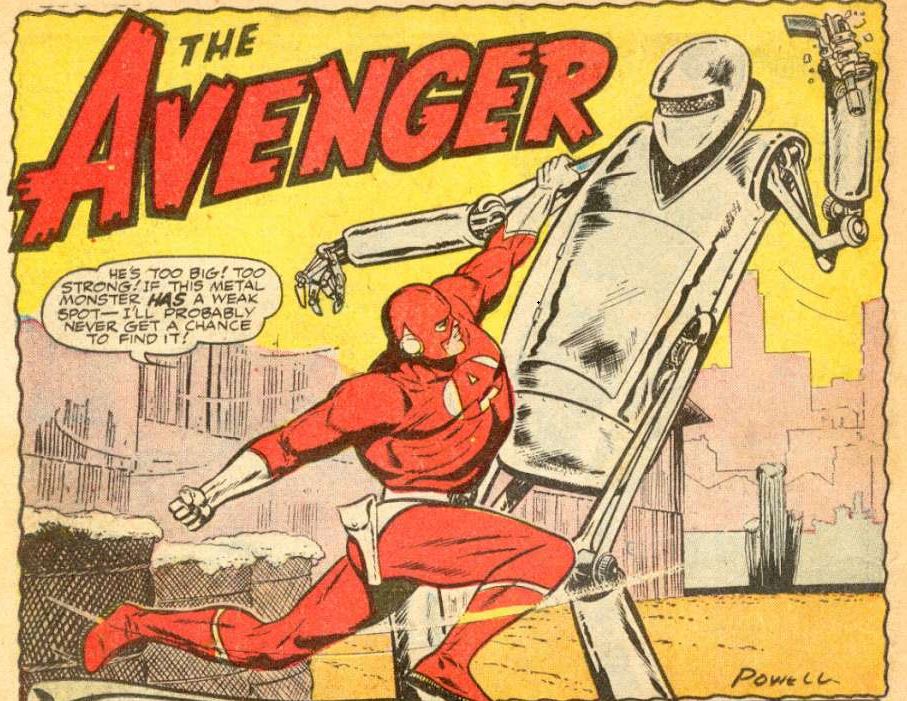 Gardner Fox borrowed the plot of a million previous comic robot stories – heck, he could have written half of them for all I know – and has the despicable Dapper Don steal a kindly scientist’s new invention to do his dirty work. In no time at all, he’s got the robot robbing a bank, his heat ray vision burning through the vault’s door. 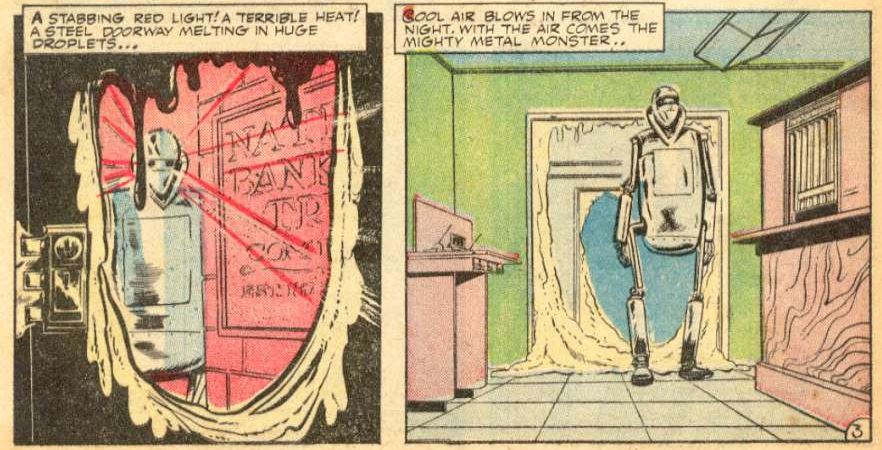 The Avenger pulls out of nowhere a handy gadget, a dissolver that might work when bullets won’t, but the robot merely reaches out and crushes it.  Thinking ahead, he attaches a tracking device onto the robot and follows it to Dapper Don’s lair. There he whips out… an ingenious new gadget? No. His spare dissolver. Voila.

To my eye, this robot looks nothing at all like Sal Buscema’s Ultron-6, not face, body, or spindly legs. Even the original Ultron-1 is closer if you check out the tracks it rolled on. But, as merrygawain pointed out in the comments, the proper comparison is to Ultimate Ultron. And this robot definitely looks similar. Too similar: it’s far less intimidating than Ultron 6. Yet Thomas’ memory of 1968 is accurate: the Avenger’s robot foe is unquestionably the progenitor of the Avengers’ ultimate (to that date) robot foe.

As a footnote, can we pinpoint a Golden Age robot that Ultron 6 may have derived from? I have more than sixty robot characters in my files from 1945-1955 comics and exactly one resembles Ultron-6 in any way. That robot – another one used by crooks – appeared in Police Comics #60 (December 1946). The Spirit uses its own radio control to follow it back to the crook’s lair.

One other possibility. Gog and Magog, the twin robots designed for working in an atomic power plant in the 1954 movie Gog. 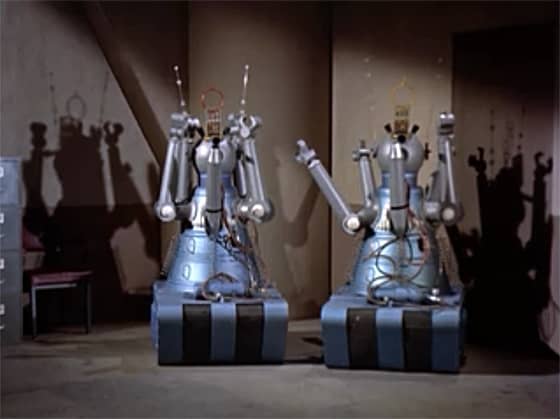 Not perfect lookalikes, but not bad either.

Could either of these be the true secret origin of Ultron 6? Or could it go all the way back to 1929, to the first robots introduced in the Buck Rogers newspaper comic strip?

Steve Carper writes for The Digest Enthusiast; his story “Pity the Poor Dybbuk” appeared in Black Gate 2. His website is flyingcarsandfoodpills.com. His last article for us was The Robots of Mahlon Blaine.

Surely there is a Magnus Robot Fighter reference to apply here.

Seriously, Gog and Magog are a great connection. Plus Captain Avenger is entirely new to me. Wow.

Absolutely agree Ultron 5 is introduced in Avengers #55 but the for the record person in me has to remind that his first visual appearance was in issue #54 in one panel as a misdirection move to set up the surprise cliffhanger ending to that issue. I was disappointed in the Age of Ultron for the simple reason that I always envisioned him as a very cranky robot -even more so then Victor Von Doom-just a personal preference on his personality. He ties with Kang as favorite Avengers villain. Great article. I was aware of Captain avenger as a character but had never read him. My background in comics reading and collecting starts effectively in 1959 with World’s Finest Comics #102 and never looked back. Prior to that Dick Tacy and Felix the Cat was my main reads and I’m still working on a set of both and much further with Felix then I ever expected to get.

Ultron works so well as a creepy villain. I think its a combination of the daddy issues and the fact that he’s never going to go away.

I’ve really enjoyed Marvel use of Ultron in the comics i’ve read recently from around 2009.

The face just really strikes a cord with me. Interesting about the origin in Captain Video.

I’d forgotten many of those origin and appearance facts, and I really appreciate this article. Thanks very much, for your research and visuals.

Great article! I hope you won’t mind my adding a correction:

The Sal Buscema illustration Roy Thomas referred to in the “Back Issue” article isn’t the “Ultron-6” image that you posted. That one’s by Barry Windsor-Smith, and is from Avengers #66. Buscema’s “Ultimate Ultron” appeared in Avengers #68 — he does in fact have legs, and looks quite a bit like the one from “The Avenger” strip, at least to my eye.

I don’t see a way to post an image in the comments, but here’s a link to the Buscema image, if you’d like to take a look:

A million thanks, merrygawain. I was wrong and Thomas was right, so I’ve updated the article accordingly. And threw in a capper at the end for an early Ultron 6 predecessor I hadn’t noticed before.

Glad I could help, Steve!

[…] *To the best of my knowledge, Thomas has never indicated whether the quasi-vehicular design of Ultron-6 was also inspired by an old Fifties comic book, in the way that Ultron-5’s head and Ultimate Ultron’s body both were.  Nevertheless, Black Gate blogger Steve Carper has rounded up a few suspects, which you can check out here. […]