Disclaimer: No chits were punched in the playing of this game.

I recently obtained a near-mint copy of the 1979 bagged version of DeathMaze for my collection. My interest was in its design and gameplay mechanics that some people thought linked it to other SPI products such as the Citadel of Blood mini-game, the Sword and Sorcery boardgame, and the DragonQuest RPG.

Because I collect these games, I look for examples that are in un-played condition. I take the effort to make my own game pieces that I then use to play the games with. In the case of DeathMaze I simply made my own copies of the ½ inch square cardboard game piece counters, normally referred to as chits by war gamers. I also carefully removed the staples from the rule book, photo copied it and reassembled it with the original staples. I now have a rule book that I can handle without worry of damage.

The original near-mint game has been packed away in my collection. SPI historically allowed for the copy of record sheets and for reproducing damaged or lost counters. The back cover of the DeathMaze rulebook is a complete black and white printing of the game’s counter sheet, provided for just such a purpose. 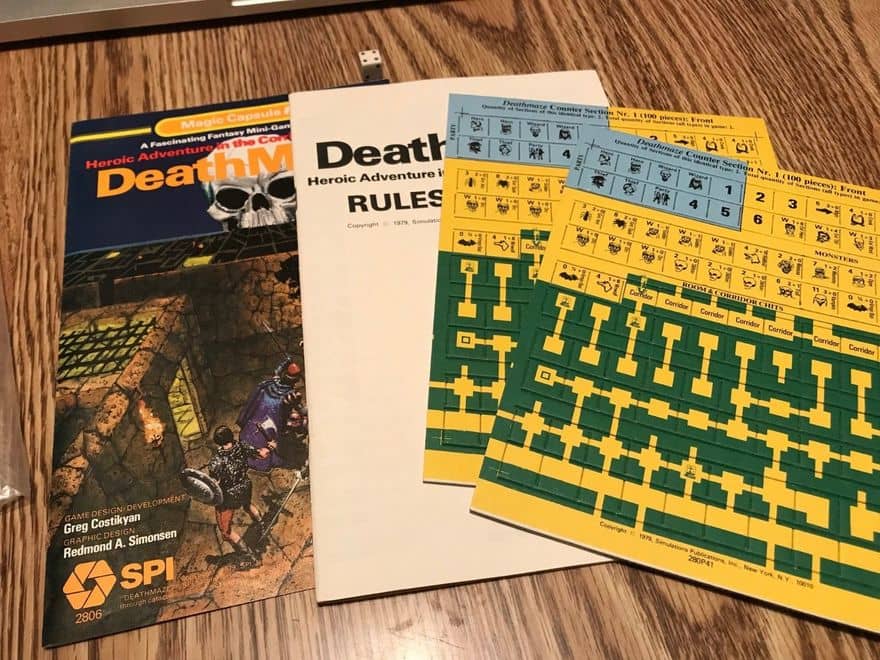 Game play is better than I expected. It is well balanced with the chance of really dramatic occurrences based on lucky/unlucky die rolls. I have played it solo three times and one of my six characters has died each time for different reasons. I am enjoying playing the game and starting with my second game session I began using the advanced rules that allows for characters to continue between game sessions, and also adds Wizards, Magical Rings, and monsters that use magic into the game.

The magic is very powerful. Spells are automatically cast and will always be successful unless the opponent resists its effects. One interesting aspect is that spell casting has a debilitating effect on the character. Each cast subtracts Wound Points from the character’s total. At first this seems a bit absurd, but it is not. Limiting the amount of spells that can be cast is good for game balance and it forces the player to think strategically. I have used my low powered wizard to get out of tight spot by waiting and casting a strong combat spell when the fighters needed the assistance. I am a big fan of SPI’s DragonQuest RPG published in 1980ts, and its magic system also had a physical impact on spellcasters. I have a bias that magic should not be free. 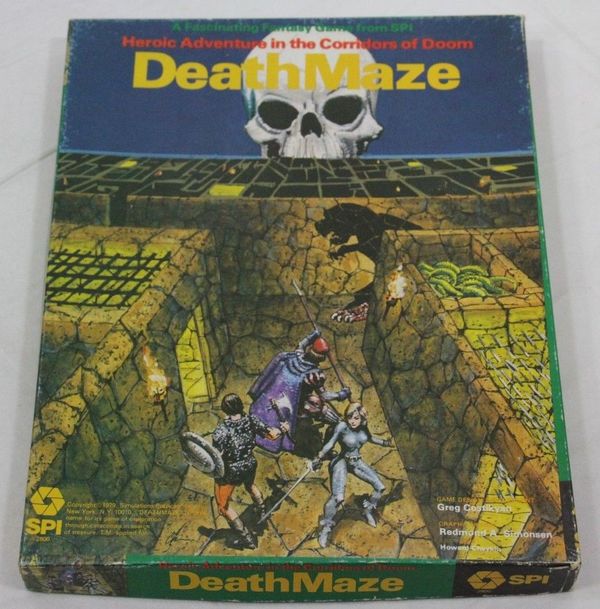 In the Advanced Rules you can keep the same characters (if they survive) between game sessions and you can increase their attributes. I have increased the wizard’s wound points, his “hit points”, to allow him to cast more than one or two spells during a game. Also of note is that play balance is also preserved by the rule that spell casting magic rings can only be used once per game session. Potions and spices are single use as well, but magical medallions and weapons last forever and can be used multiple times within a game session.

I really like the random maze generation mechanic. It is easy to learn and truly generates a very random maze. One simply decides which door or open corridor the characters are going to explore next, pull a random chit out of a cup, and add it to the maze. Sometimes a chit won’t fit because it has too many or too few doors to fit with the chits it is being played against. It those cases, one simply draws a new chit, until a match is found, and continues. I am already thinking of adding a few house-rule chits to the mix that will help solve the issue that no corridor can have a dead-end. My current maze has eight open corridors to be explored and I see that number increasing with each game session. 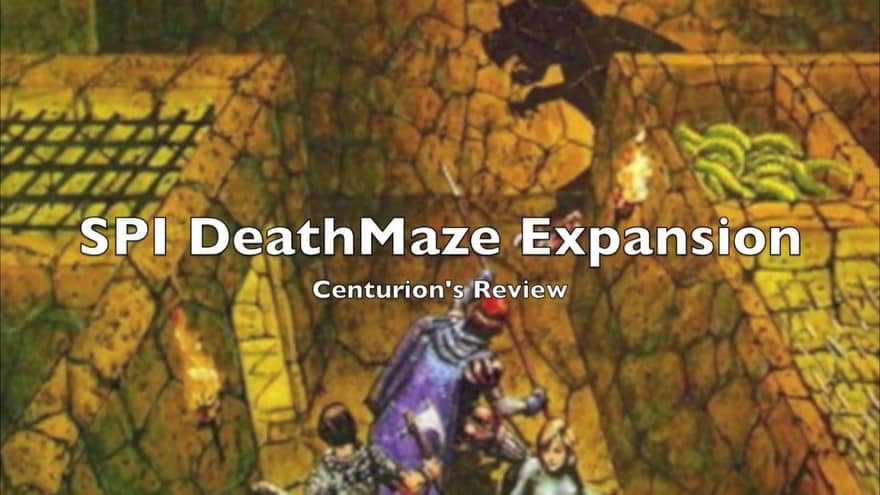 I have taken a quick look at the variant expansion for the game that was published in SPI’s Moves magazine #51 (June 1980). It adds character types and rules that describe how to explore lower levels of the maze. I’ll likely be playing with these variant rules soon.

Citadel of Blood is another SPI game that reportedly uses a similar maze generation mechanic, and it is on my “to buy” list as well. What I have read about Citadel indicates that it has an end-game goal in the form of finding a specific situation somewhere within its random maze, whereas DeathMaze‘s goal is to keep exploring a potentially infinite maze, and each game session has the goal of the characters’ gaining a set amount of treasure and experience. I am more curious than ever to see what there are between these two games. 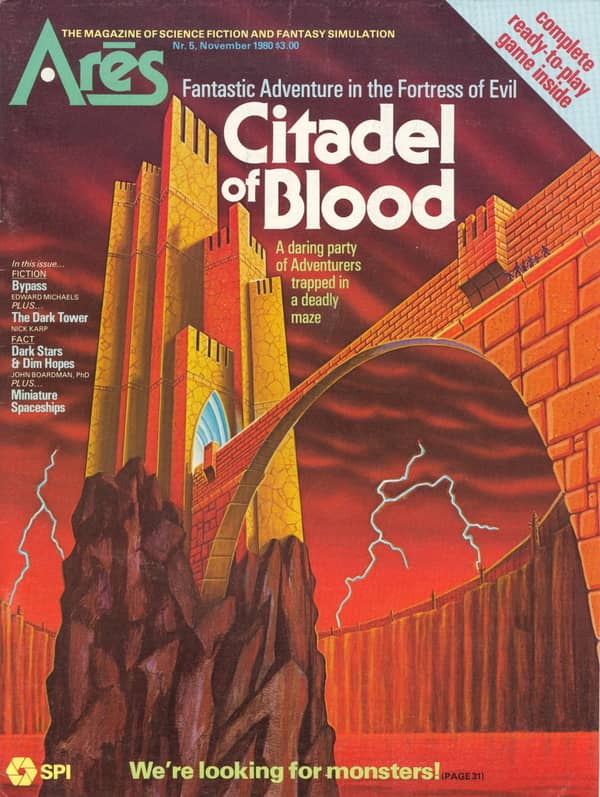 There is one aspect of DeathMaze that I have not mentioned. It is tiny. My first maze would fit on a 3X5 notecard. The chits are of the same typical 1/2 sq. inch size and design of SPI’s wargames counters. And make no mistake; this game has its feet firmly planted in the wargame mindset. At points within the rules mention is made that players may want to “keep track” of some data on “a piece of scrap paper,” a sure sign that the game was designed by people who are comfortable with the complexity of wargames.

I do use pencil and paper during the actual combat phases. However, for everything else I pulled out the most modern of scrap paper, a laptop with a spreadsheet app, to keep track of data on. This also appeals to me and speaks to the child I once was. I have very fond memories of playing dice baseball for hours and hours on cold rainy days. This is probably another bias as to why I like this game so much. 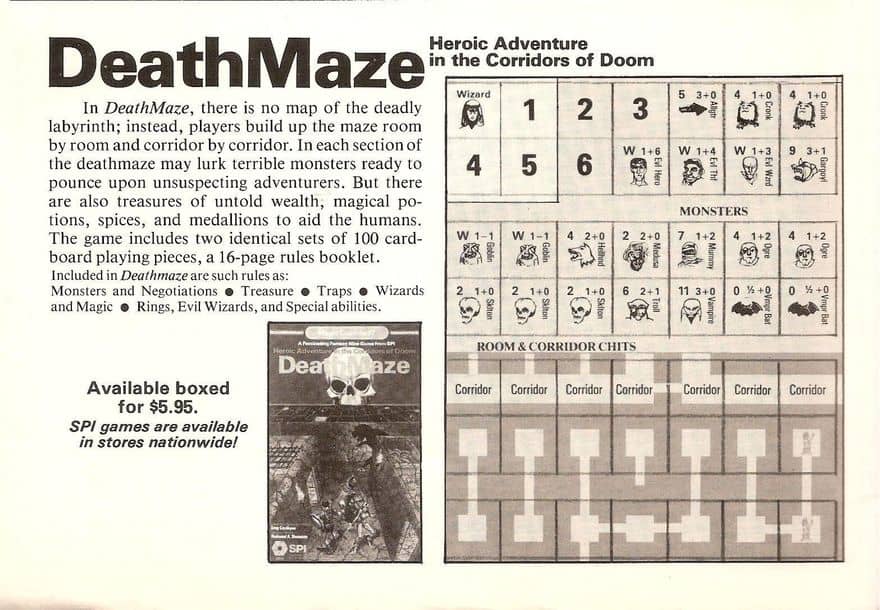 One of the questions I wanted to answer was, could DeathMaze actually work as an aid to help RPG Game Masters develop their world’s dungeons and castles? I think it can. A Game Master could ignore the battle rules, and use the maze generation mechanic to create an outstanding outline dungeon to be populated by any RPG’s monsters, heroes and artifacts.

Yes, it is a simple game and I really like it. On those rainy days when I can’t get out to hike or to work in the garden, I can see myself pulling DeathMaze off the shelf and playing a game or two. 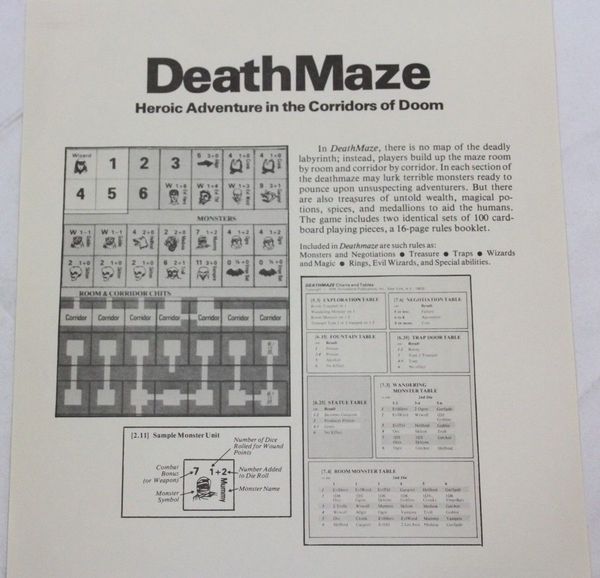 Below are some additional photos of the contents of the ziplocked and boxed editions of DeathMaze. Enjoy. 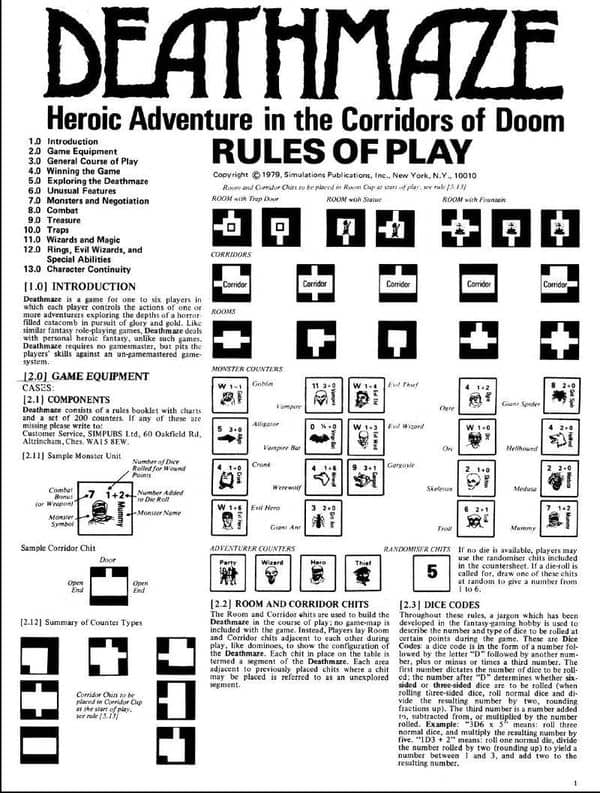 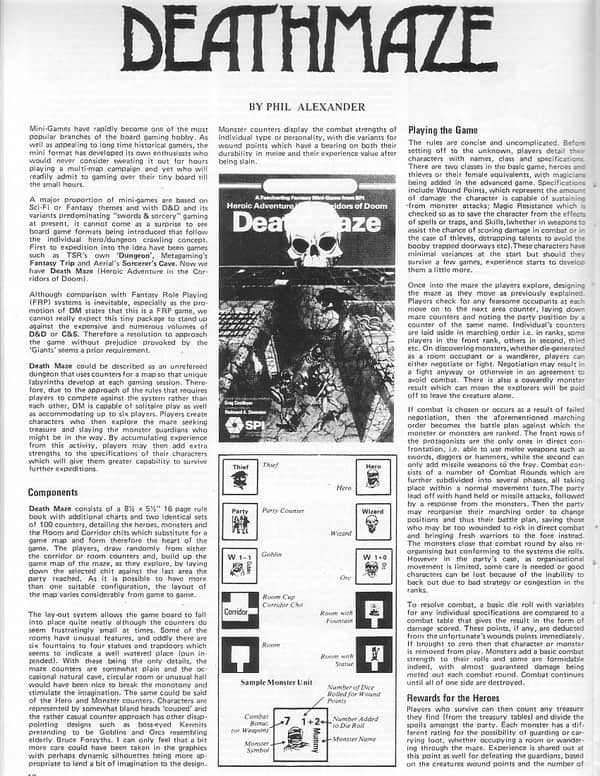 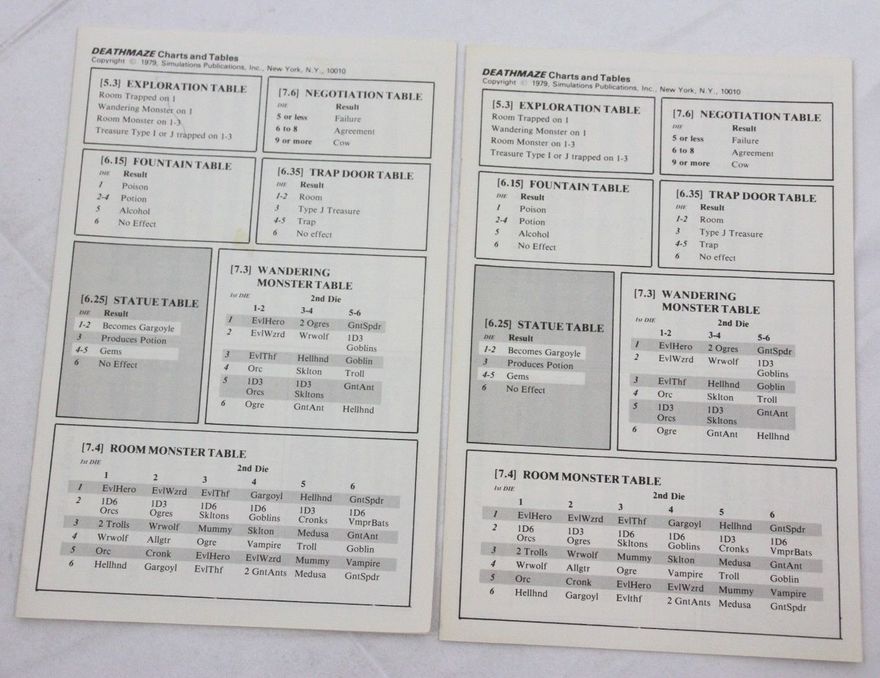 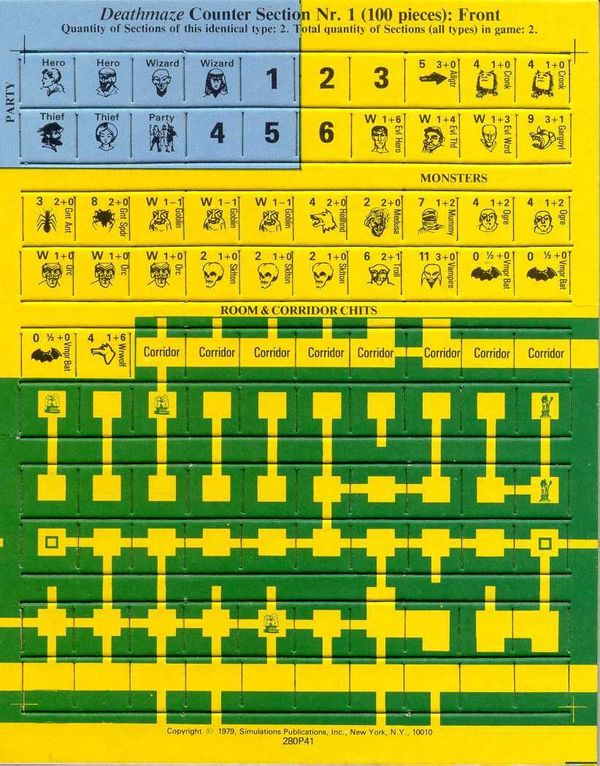 Thanks for sharing this! I was very curious about the game myself, but had to part with it (and glad it went into the hands of someone who really appreciates it!).

Perusing the rules, I did think, “Geez, with this spells-for-hit-points system, a wizard could only cast one or two spells a game.” It sounds like your play confirmed this. It gave me the impression that wizard characters are very weak, but I guess I was thinking in more of an RPG mindset. For a strategy game like this, your wizard is just one facet you want to use strategically when the time is right.

Re: The monster counters. Glad you gave a close-up pic of those. They really cracked me up: such a hodge-podge. You might open that door and encounter an alligator, a vampire bat, or….a CRONK! (The cronk strikes me as being soooo ’70s. I could easily picture getting a rubber version of him out of a vending machine.)

[…] small SF and Fantasy line of Quad Games, and my favorite one of those was a tiny ziploc game called DeathMaze. Many games get relegated to shelf space over the years, but not DeathMaze. I played that […]