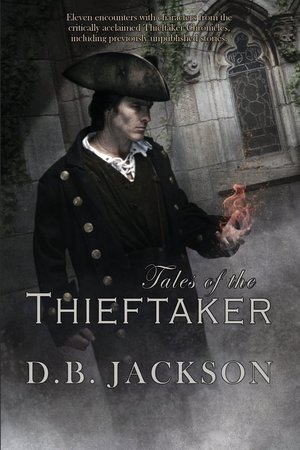 If I needed any more proof that there is a TON of fantasy being published these days, I need look no further than the case of D.B. Jackson, aka David B. Coe. He’s written nearly twenty novels, and the first time I heard of him was John O’Neill’s post about the book I’m reviewing today: Tales of the Thieftaker (2017). As Coe he’s written several epic fantasy series.

As Jackson, he’s written four novels about Ethan Kaille, a thieftaker and conjuror in pre-Revolutionary-era Boston. Historically, in a time before police forces, thieftakers were individuals who recovered stolen goods. By summoning up a spirit, conjurors have the ability to cast magic spells by drawing on “the power that dwelt between the living world and the realm of the dead.”

After his service in the Royal Navy Ethan went to sea as second mate on the Ruby Blade, a privateer out of Boston. His participation in a failed mutiny led to a sentence of 14 years penal servitude on Barbados. Upon release he made his way back to Boston. He has lost the woman he loved, lost his reputation, and as we learn in this collection, struggled to find a new purpose to his life.

Tales of the Thieftaker collects eight stories, two not-quite stories, and a novella. Except for the last, all the pieces were previously published. Most star Ethan and the rest focus on other important series characters. Despite one drawback, it serves as a fine introduction to Jackson’s character and his world.

The opening story stars Sephira Pryce, Ethan’s ongoing series antagonist. “The Cully” introduces Sephira as the twelve-year-old scout of a pickpocket. There are none of the supernatural elements that typify the later stories; here is a study of Boston as a city of significant divisions between rich and poor.

“The Tavern Fire” takes place before Ethan has returned to Boston and tells the “true history” of the Great Fire of 1760. It stars another series regular, Janna Windcatcher, proprietor of the Fat Spider tavern.

While the first two stories are well done, my unfamiliarity with the series’ characters meant they didn’t carry as much weight as I imagine they do for veteran readers. That was not the case with Ethan’s origin story, “A Memory of Freedom.” Ethan has only recently come back to Boston and is a bit of a broken man. He’s taken employment with an ill-tempered and unpleasant tavern-keeper. Fourteen years of enslavement have turned him into a subservient and extremely cautious man.

This is my favorite story in Tales of the Thieftaker. Coe does an excellent job bringing home Ethan’s piteous state, and then an equally strong depiction of why and how he’s raised out of it. Seventy years out from the Salem Witch trials, conjuring is seen as witchcraft by most people and it carries the real threat of execution. That, plus his regret over using his talent during the mutiny, has kept Ethan from conjuring for the whole fourteen years of his imprisonment. Even when he nearly lost his leg to infection he would not cast a spell of healing. When he witnesses a man robbed and brutalized a desire for justice is sparked inside him. He throws away caution and embraces his talents.

I also found myself immediately intrigued by the book’s good and spooky magic system involving spirits and a little blood:

His Latin sounded ragged; it had been too many years since last a spell had crossed his lips. And yet the sensation was as familiar as the sound of his own name. Power thrummed like a bow string, humming in the cobblestones beneath him, in the walls of the buildings around him. At the same time, a spectral figure appeared at his shoulder, a ghostly form glowing with a deep russet hue. The shade was tall, lean, dressed in a coat of mail and a tabard bearing the three lions of the ancient kings. His beard and close-cropped hair might have been white had it not been for the radiance clinging to him.

This figure, too, Ethan remembered. The power necessary to cast spells dwelled at the boundary between the living world and the realm of the dead, the ephemeral plane of spirit and soul. Every conjurer relied on a spectral guide to access magick, and this old warrior with his bright, glowing eyes had appeared with every spell Ethan had ever cast. He might have been an ancestor; he reminded Ethan of his mother’s prickly brother, Reginald. So Ethan had taken to calling the specter Uncle Reg. 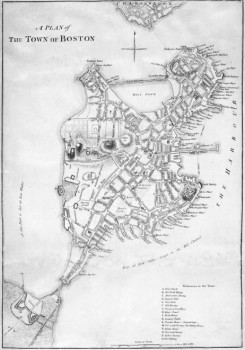 “The Price of Doing Business” and “A Spell of Vengeance” focus on two of Ethan’s cases. Both highlight Ethan’s inexperience at his new profession of thieftaker. Ethan isn’t a fool, but he does make mistakes with serious consequences. I am a fan of any author willing to show his lead character in a less-than-perfect light.

Coe writes that “The Witch of Dedham” might well be his own favorite Thieftaker short story. He wrote it for publication on his website and it has become something he commonly reads aloud at conventions. Despite having a tired central conceit, there is power in this story that comes from Ethan’s interaction with the witch of the title and his ultimate failure at the task he’s set himself.

“The Spelled Blade” and “A Passing Storm” are two more episodes from Ethan’s career. In the first he gets mixed up in a struggle between two other conjurors while visiting the horse races. The second, which Coe describes as close to flash fiction, concerns nothing more than Sephira Pryce threatening Ethan. Nevertheless, it displays well how much Ethan has changed and regained confidence since he’s come home to Boston.

She bared her teeth. “Good. Perhaps this would be a good time for you to consider some other line of work. I tire of sharing my clients with you, of having to clean up your messes, and of having to explain again and again why I tolerate competition from a neophyte like you.”

Ethan saw Kannice bristle, but before she could do or say more, he laughed.

“I know you’re not. But I find you amusing nevertheless.”

Lightning flashed, brightening the shop for an instant, and another clap of thunder shook the building.

Ethan bit down on the inside of his cheek, tasting blood. With it he could conjure, either to protect Kannice, or to lash out at Sephira and her man.

He saw from the glimmer of alarm in her eyes that she did. He glanced Nap’s way. “Keep your hands where I can see them, or I’ll light her hair on fire.”

“A Walking Tour of Boston, Narrated by Ethan Kaille” is exactly what it says in the title and was written for the website AllThingsUrbanFantasy.com during Coe’s blog tour supporting the series’ second novel, Thieves’ Quarry (2013).

“An Encounter with Sephira Pryce” is proffered to the reader as an interview of Sephira done by D.B. Jackson himself. Like “A Walking Tour,” it was written for a Thieftaker blog tour. In the introduction, he writes that of the several mock interviews he’s done with Sephira, this is his favorite, “in large part because it is so silly, and because in this case she turns her ire on me.” I found it to be silly indeed, and I loved it. From it, it’s obvious why she is a fan favorite:

DBC: Fine. Why don’t you tell our audience a bit about yourself.

SP: Is that really necessary? Haven’t they all heard of me already?

DBC: It’s possible that some have not.

SP: Oh! The poor dears! Well then, yes. By all means. [Clearing throat] My name is Sephira Pryce, and I am the foremost thieftaker in the city of Boston. Some know me as the Empress of the South End, but you and our guests here today may call me Miss Pryce.

DBC: You are a contemporary of Samuel Adams, are you not?

SP: Yes, I am. But he is hardly someone of interest to those reading this piece. He solves no crimes, he has not fought his way up through the streets of this town to a position of power and respect. He is the son of a politician who has not managed to rise above his father’s middling station. 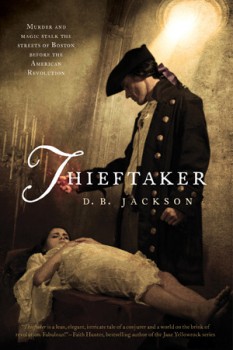 The final, and longest, tale, “The Ruby Blade,” provides readers the details of the incident that ruined Ethan Kailles’ life and ultimately set him on the road to becoming a thieftaker. Coe skillfully weaves the events of 1745 into those of the series’s present, 26 years later. Sephira Pryce comes calling on Ethan at the tavern he owns with his wife to ask him about the captain of the Ruby Blade from all those years ago. The basic outline of the mutiny and Ethan’s part in it has already been told several times over the course of the collection, but it’s served well by the thorough fleshing-out it receives here.

I am not the biggest fan of contemporary urban fantasy. It was cool and new thirty years ago in Emma Bull’s War for the Oaks, but too often its aesthetic of Goth elves and jaded, leather jacket-wearing, spell-casting gumshoes leaves me bored. On the other hand, I do like urban investigators in a more traditional fantasy setting, like Glen Cook’s Garret and Steve Brust’s Vlad Taltos. So you can understand when I say I approached Tales of the Thieftaker a little apprehensively.

If it isn’t obvious already, I enjoyed myself, ripping through the book at a quick pace. Jackson’s prose is clean; he’s a good storyteller. The stories are tense, the mysteries good, the characters well-drawn. His Boston reeks believably of crowded, dirty streets and you can smell the creosote from the wharves. It’s definitely the historical aspect that makes Jackson’s stories more enjoyable for me than most contemporary urban fantasy.

I mentioned a drawback, and it’s one common to many anthologies. There’s a repetition of background information in nearly every story involving Ethan. I’d guess it’s the consequence of each story being written for a specific anthology, and so a potentially new audience each time, but it gets a little tiresome having to reread how magic works, why Ethan calls his spirit guide Uncle Reg, and so on. Fortunately, it’s a minor thing, and not enough to overwhelm Jackson’s aforementioned strengths as a storyteller.

A relatively short book by today’s standards (under 300 pages), Tales of the Thieftaker is a brisk read with an engaging lead, a colorful supporting cast, and a nicely detailed setting. I’m tempted to pick up the first novel in the series, Thieftaker (2012). If my TBR stack wasn’t so high, I’d probably buy it right now.

Ack! I missed a Thieftaker book! Thank you for the heads-up, Mr. Vredenburgh.

I have enjoyed the series all the way through and I have read some of the separate stories (and that lovely, silly interview), but it would be nice to have them all together, particularly with the new Ruby Blade yarn.

I have the first four books in hardcover for which very grateful as I usually wait for the paperback. If I understand it correctly the fourth novel is NOT being published in paperback and I hope to order the above soon after the electric winter bill goes down a bit. Pesky bills.