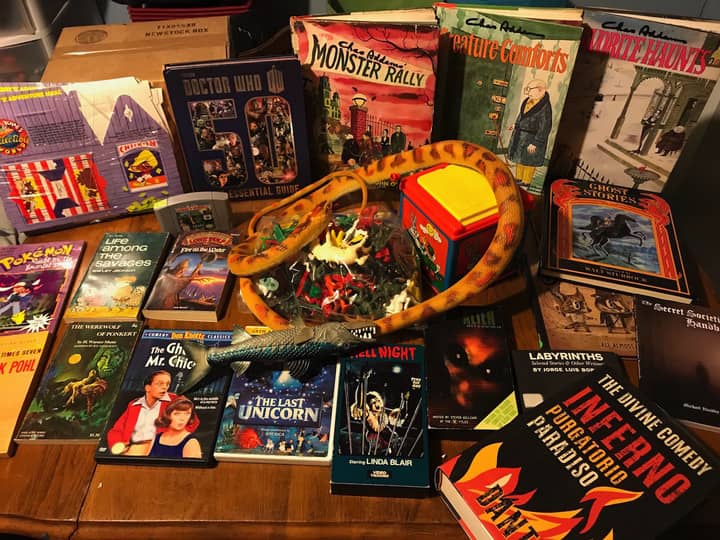 On Wednesday, January 17, 2018, after I clocked out from work, I decided to do a 5 for 5: Hit all five of Med City’s thrift stores (at least that I know of) — 2 Goodwills, 2 Salvation Armys, and a Savers. I also dropped in at Nerdin’ Out, a store that specializes in collectible comic books and action figures.

It was a challenge, as I had just sprained my ankle that morning, and the walks down the aisles started to feel longer and longer as the day wore on. By the time the sun was setting, I had adopted the limping, shambling gait of the recently undead. But the increasingly incredible finds that I kept stumbling upon at one store after the other released enough adrenalin to keep me going — all the way until I got home, pulled off my snow boot, and found my ankle swollen to double its size.

Here (sharing only the finds that would be of particular interest to readers of this site) is my haul. Not all pickin’ days are this fruitful, I assure you. If they always turned out like today, hell, this is all I’d ever do.

From schlocky VHS horror flicks and classic sci-fi paperbacks to giant rubber snakes and other rare collectibles, today’s pick turned up treasures from across the entire spectrum of what I hunt for. 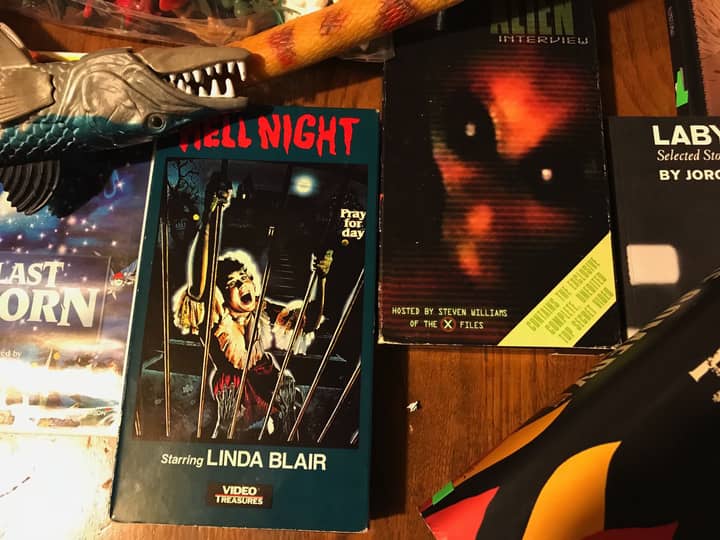 For highbrow literary tastes, I’ve got some Borges (an icon of magical realism) and the B&N omnibus edition of Dante’s trilogy (I think I might already have that copy, but grabbed it in case I didn’t — it does reproduce all the Gustave Dore prints, which are the epitome of dark fantasy illustration, aren’t they?). 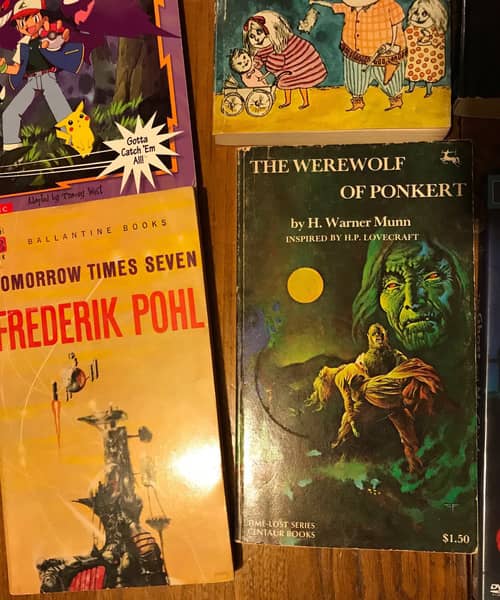 But check out this other find (I love coming across these cool vintage paperbacks I’ve never heard of): The Werewolf of Ponkert by H. Warner Munn “Inspired by H.P. Lovecraft.” A quick check reveals you can’t get this for less than $14 currently on eBay. And a quick perusal of Munn’s entry on Wikipedia tells me why his name sounds so familiar.

I don’t normally buy VHS tapes (who does?), but I make exceptions for certain horror fare (which has its own burgeoning collectors’ market). Like Hell Night, a low-budget slasher from the ‘80s (I remember watching it when it first came out on VHS with some of my friends at a slumber party). The other one is Alien Interview, a 1997 “documentary” that purports to contain real footage of an alien (yes, part of the X-Files era boom of “real found footage” like Alien Autopsy). It has never been released on DVD and you can’t get the VHS for less than $13 on eBay. 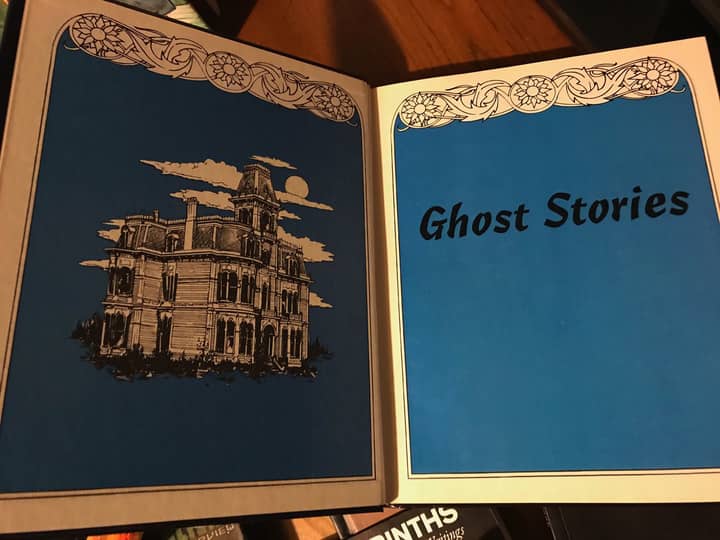 Lots of other fun finds, including a Dr. Who 50th Anniversary Essential Guide and an illustrated collection of ghost stories. Every story in this particular anthology I have multiple times over — the most anthologized classics like “The Monkey’s Paw” and “The Legend of Sleepy Hollow” — but I grabbed it for the illustrations: especially the foreboding Victorian house on the frontispiece, since I collect depictions of haunted houses in various mediums.

I’m tellin’ you, weird stuff turns up in thrift stores. 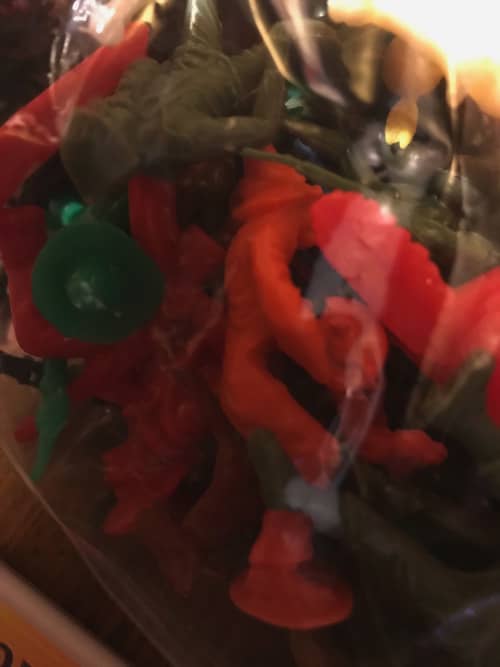 I also collect vintage rubber jigglers (the monsters, snakes, insects, Ben Cooper superheroes and untold other detritus of pop culture lovingly mass produced in oily rubber). Just about every kid had a few if you grew up some time in the ‘60s through the ‘80s. They ranged in size from vending-machine prize to large and heavy enough to club your sibling with. Not a whole lot of them survive intact, because it was so tempting to see how far a limb or a tentacle or a tongue would stretch until it broke, or to bite off the tail, or to hide it in your sister’s closet and forget about whatever happened to it. 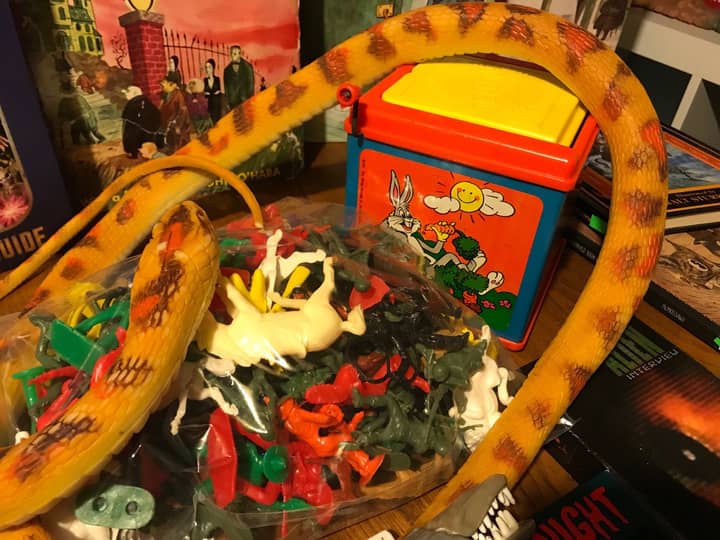 So I was delighted to come across this SIX. FEET. LONG. Python! A true Hong Kong original. My parents bought one for me on a trip to Disneyland, purchased at the gift hut outside the Jungle Safari ride. This specimen is all there, from the tip of his tail to the tip of his forked tongue. Since I got him for 99 cents, that comes to roughly…17 cents a foot. According to my haphazard research, I believe this to be the single largest, heaviest mass-produced jiggler ever made (he weighs 2 lbs. 2 ozs.). In the wrong hands, this thing could be a whip that would leave marks. But you don’t have to worry. Now he is in my hands. Until my son gets ahold of him and pulls his tongue out.

There in the center is a big Goodwill Grab Bag of cowboys and army men. I always get excited when I see these, but they usually turn out to be modern. Not this time. These were all vintage, including some Tim-Mee Toy and Tempo figures. And if you look closely… squeezed in there amid the drab green soldiers and neon green cowboys is an MPC witch. That figure alone is worth over ten bucks. Another ten for the Tim-Mees and Tempos, and another ten for the rest of the bag: That’s thirty dollars worth of plastic bliss in a bag, had for a mere $4.99. (And if this is reminiscent of drug talk; yes, I do get a little high off plastic cowboys and witches. Pose them just right alongside a gargantuan rubber snake and it’s almost hallucinogenic.) 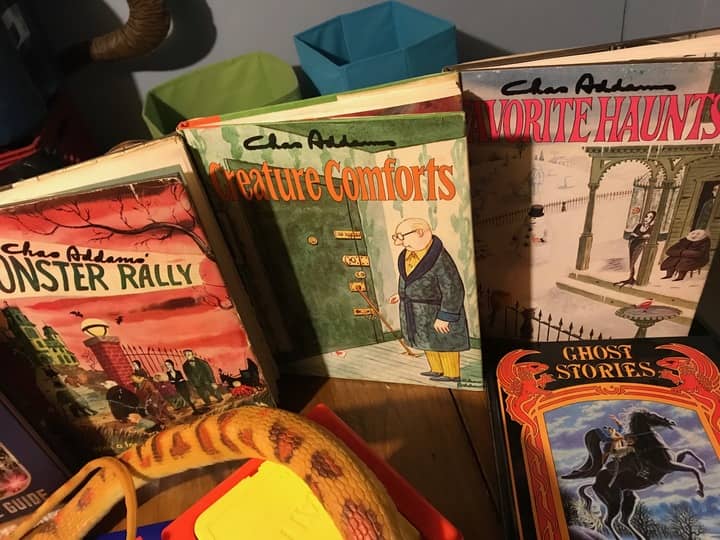 There’s a special place reserved in my heart for two comic masters who combined humor and the macabre in a way no one else has come close, except perhaps Gahan Wilson: Edward Gorey and Chas Addams. So you can imagine how chuffed I was to find not one, not two, but THREE original hardcover Addams collections with their dust jackets at Salvation Army. Hallelujah!

And this was apparently an Addams Family theme day, because these were at the second Salvation store I stopped at. At the first one I found another minor treasure that I forgot to include in the collage picture: the 1965 Addams Family Card Game, complete. I paid a little more for that than I typically spend on a single item at a thrift shop — $15 — but you can’t get one online for less than $45. (And since I already have it, there’s going to be another one coming soon to an eBay near you.) 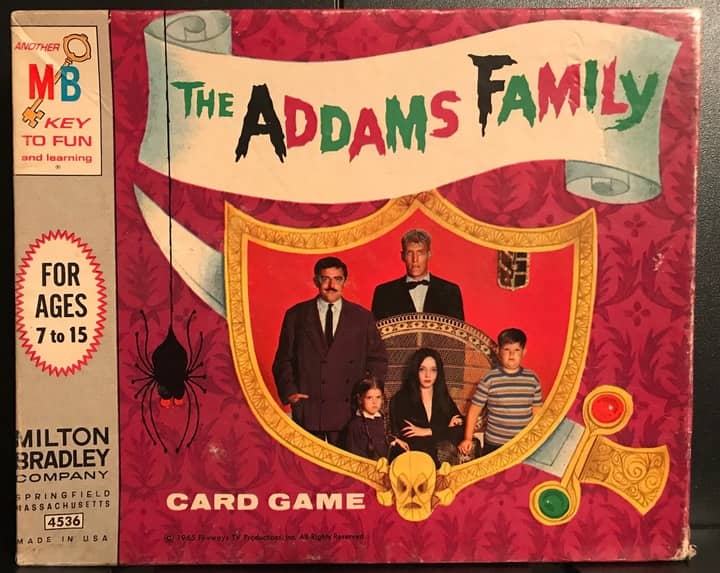 Lots of stuff I pick up just to entertain both my inner child and my two outer children; hence, the Pokemon book and that giant alligator gar. Not worth much, but way cool and my son will get a kick out of it. That gar is from an Animal Planet collection I believe. They’re putting out some of the most mind-blowing playsets (my gauge for mind-blowing is when I see a toy and desperately wish it was out when I was a kid), including Yeti and Bigfoot hunter sets that have some of the cooler designs of those monsters you’ll find. 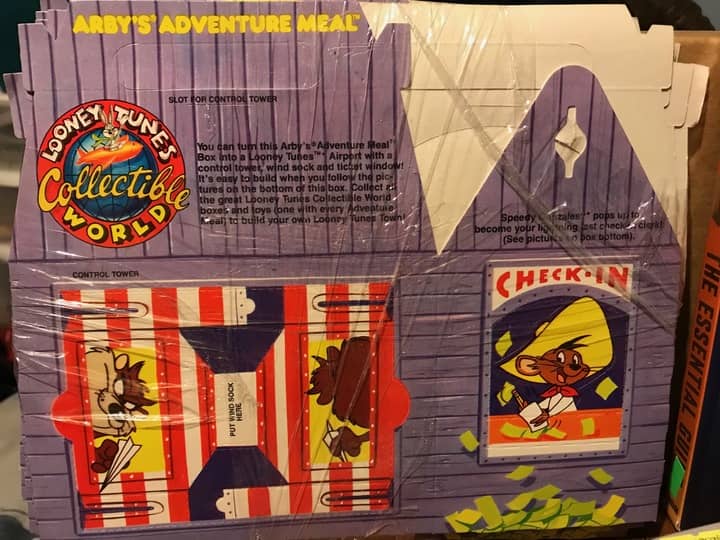 But the Big Score (the one I can use as an excuse to my wife for buying all this junk) is up there in the upper left corner of the picture of today’s Haul. That’s a sleeve of unfolded Arby’s Adventure Meal boxes from 1987, a Looney Tunes tie-in. Rare and collectible, you won’t find one for under 20 bucks on eBay. I found sixty-seven of them. (And, again, how do these happen to wind up on a Goodwill shelf in 2018?) If I get just ten bucks apiece for them, that’ll almost pay my mortgage for a month. To celebrate, I stopped and had a roast beef sandwich at Arby’s.

I must admit I’m envious of more than a few of your treasures. Especially that Munn paperback — which I’ve never even seen before — and of course the Addams volumes.

Plus several delights you didn’t even mention, like that Lone Wolf book, and that DVD of The Ghost and Mr. Chicken hiding in the mix, which Bill Lengeman reviewed for us just last year:

I went looking for Charles Addams books at a used bookshop down the street…they had one, and it was priced at $60. Remember the days when they were everywhere?

Yeah, Bill Lengeman’s review lodged in my brain and made me want to see it.

To round out the items not mentioned:

A 1978 Mattel Bugs-Bunny-in-the-Box, still works (makes the familiar tune when you turn the crank and then Bugs pops out). “Nyah, what’s up doc?” You have to provide the voice.

Book 2 in the multi-part Lone Wolf series. I enjoyed playing through the first 7 books or so back in junior high, and have been trying to assemble the complete series (there ended up being 29 with another spin-off series besides). For readers not familiar: They are a continuing solo adventure, so you carry your character over from book to book.

The Secret Societies Handbook. A handy reference tome! Especially interested in the section on the Hermetic Order of the Golden Dawn (which included such well-known names as William Butler Yeats and Aleister Crowley among its members). According to this book, the Golden Dawn had the most extensive collection of magic ever assembled before its dissolution in 1903.

An Illustrated Book of Bad Arguments by Ali Almossawi, which uses cartoon animals and funny stories to illustrate the various kinds of logical fallacies.

Shirley Jackson’s Life Among the Savages, her non-fiction book about raising children.

A Frederik Pohl paperback with a cool vintage cover.

The Last Unicorn on DVD. One of the great animated fantasy films. Very true to the source material (probably because Beagle wrote the screenplay), cool visuals, and a soundtrack by the ’70s soft-rock group America! I saw them at an outdoor concert last year and so wished they’d play “I’m Alive (The Last Unicorn)” or “Walking Man’s Road,” but I guess they don’t really consider those part of their greatest-hits back catalog.

Yeah, his original hardcover collections are getting pricier and pricier. $60 sounds in the ballpark of what I’ve seen online (depending on the volume and condition).

I’m almost ashamed to tell you I paid $2 apiece for these.

Ah yes, the bounty to be had when people like us start kicking the bucket, and those left behind look at each other and say, “Look at all this crap! What are we supposed to do with it? Well, there’s always Goodwill…”

Since my wife and I have moved to Minneapolis, she likes going to weekend estate sales with a friend of hers. There is some website that announces them and provide pics of the sorts of things for sale. She often lets me know if there are a lot of books in an estate sale. Might be worth your checking out.

Good score on that Munn book Nick. When I was researching him that specific Werewolf of Ponkert edition by centaur press was indeed already pretty rare and pricey.

Truth. When you come across some of the vintage toys, especially, you know it wasn’t a parent cleaning out the toys their kids have outgrown, because that would’ve been 30 years ago. Many such finds must’ve been treasured items someone held onto for decades.

Oh yeah, estate sales can be great places to score neat stuff, depending on who’s running the sale. Some sale brokers have a good idea of what the collectible stuff is worth and price accordingly, but sometimes you get lucky.

I stopped at a farm estate sale one day that I just happened to be passing by. Most of the folks were there to bid on farm equipment and tools; I noticed the box of books that no one else seemed much interested in. I got it for two bucks. Inside were some classic fantasy paperbacks, and four of the rare TSR Heart Quest books, 1980s “choose-your-own-adventure”-type D&D romance books that were written to appeal to girls. I sold two of them online for over $100.