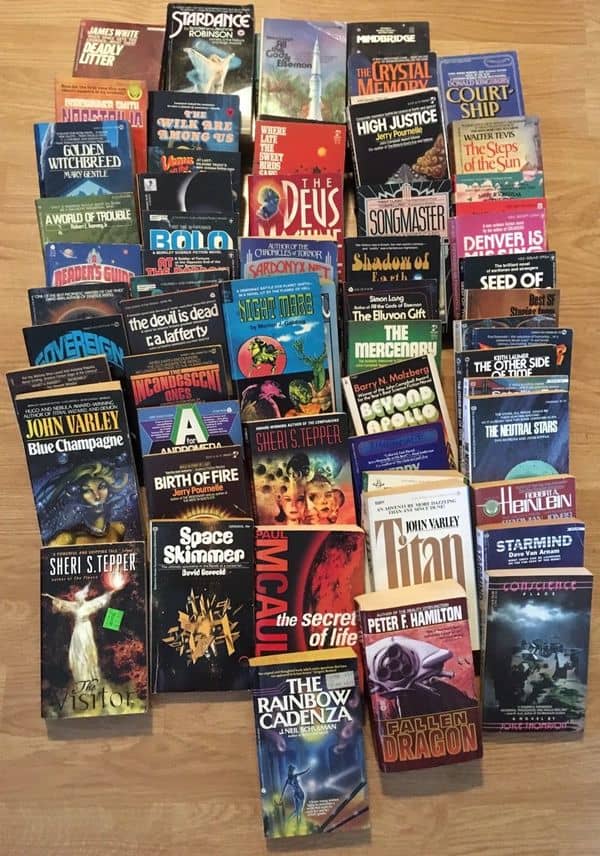 Back in October I was doing an innocent eBay search on R.A. Lafferty, and I stumbled on the lot of vintage science fiction paperbacks above. 65 titles from the 60s, 70s, and 80s, in what looked like pretty good shape, for the Buy-It-Now price of $18.

Well, this was a pickle. The way the books were laid out I couldn’t even see them all, which was annoying. And the vast majority of the ones I could see, I had already.

On the other hand, 65 books, 18 bucks, that’s…. what, like a quarter per book? At that price, it’d be well worth it just to upgrade my existing copies with ones in better shape. And there were a handful of tantalizing titles I didn’t have, like The Rainbow Cadenza by J. Neil Schulman, The Crystal Memory by Stephen Leigh, Conscience Place by Joyce Thompson, and The Steps of the Sun by Walter Tevis. Plus that Lafferty paperback, The Devil is Dead. And y’know, it was true that I couldn’t see all the covers, so who knew what treasures were lurking in all that jumble?

In the end, it was just too tempting. I pulled the trigger on the auction, shelled out the $18 (plus shipping), and waited impatiently to find out exactly what I’d bought.

The box arrived about a week later. What with one thing and another (like assorted publishing deadlines, and straightening up the house before my kids came home so it didn’t look like Dad became a crazy book hoarder while they were off at college), I didn’t get to open the package until two weeks ago, shortly after I started my Christmas break.

But the timing worked out. Opening the box was like Christmas come early. Here’s what was inside. 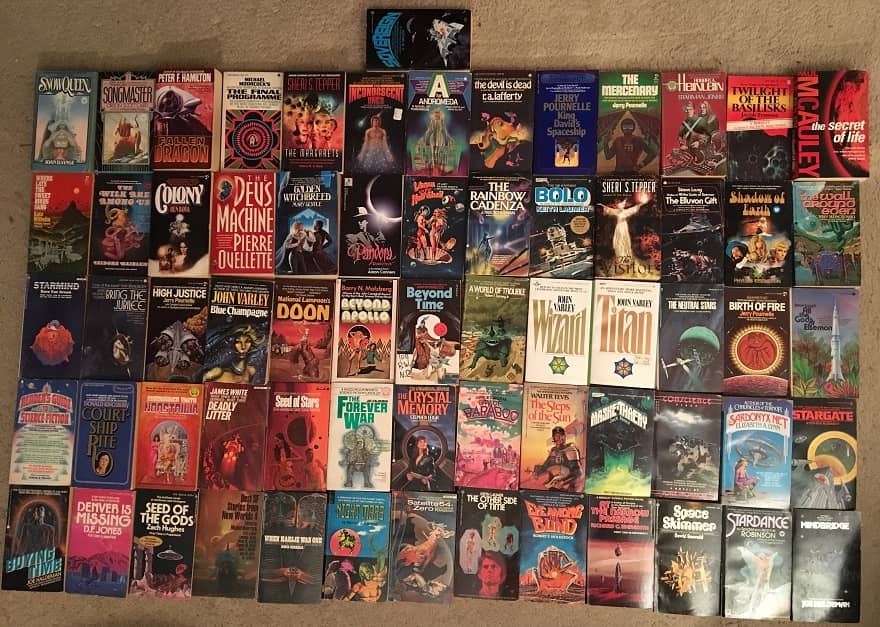 The first thing I noticed was that the books weren’t in good shape…. they were in great shape. A few biffs and bent corners here and there, but the majority were virtually flawless. They looked like they’d never been read.

Now, finding sixty-five 30-50 year-old paperbacks in nearly flawless shape for about a quarter apiece is a pretty significant find. You can’t even buy the same volume of firewood at that price.

But it was the wide range of titles that was really a delight. Spend any significant time on eBay looking at collections, and you’ll quickly get tired of sifting through countless lots of battered paperback copies of David Eddings, Terry Brooks, and Anne McCaffrey for $3 per book. Look beyond the 80s and 90s bestsellers, however, and you’ll find things are a little thinner on the ground. There are more diverse lots to be found, if you’re diligent — or in my case, lucky. 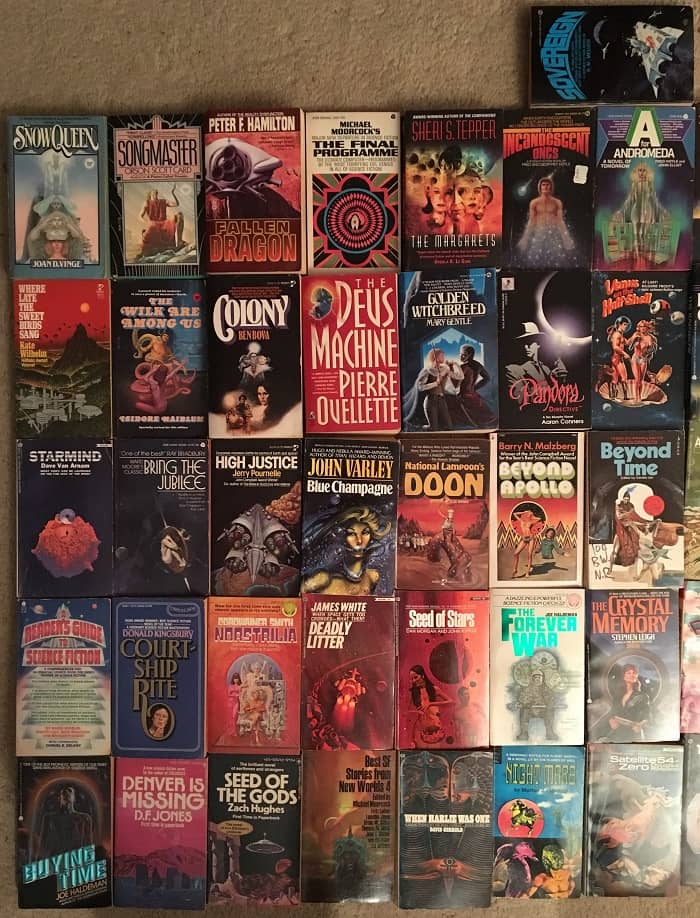 The set contained an assortment of titles I’ve already read, of course, including Snow Queen by Joan D. Vinge, Songmaster by Orson Scott Card, The Mercenary by Jerry Pournelle, and BOLO by Keith Laumer. In many cases however the copies were superior to mine, so I was happy to replace my worn copies with new ones.

There were also more than a few surprises, such as hard-to-find titles like Robert Holdstock’s debut novel Eye Among the Blind (1979), Kate Wilhelm’s Hugo Award-winning Where Late the Sweet Birds Sang (1977), Michael Moorcock’s first Jerry Cornelius novel, The Final Programme (1968), Ward Moore’s alternate history classic Bring the Jubilee (1972), Joan Slonczewski’s post-apocalyptic tale The Wall Around Eden (1990), and many others. 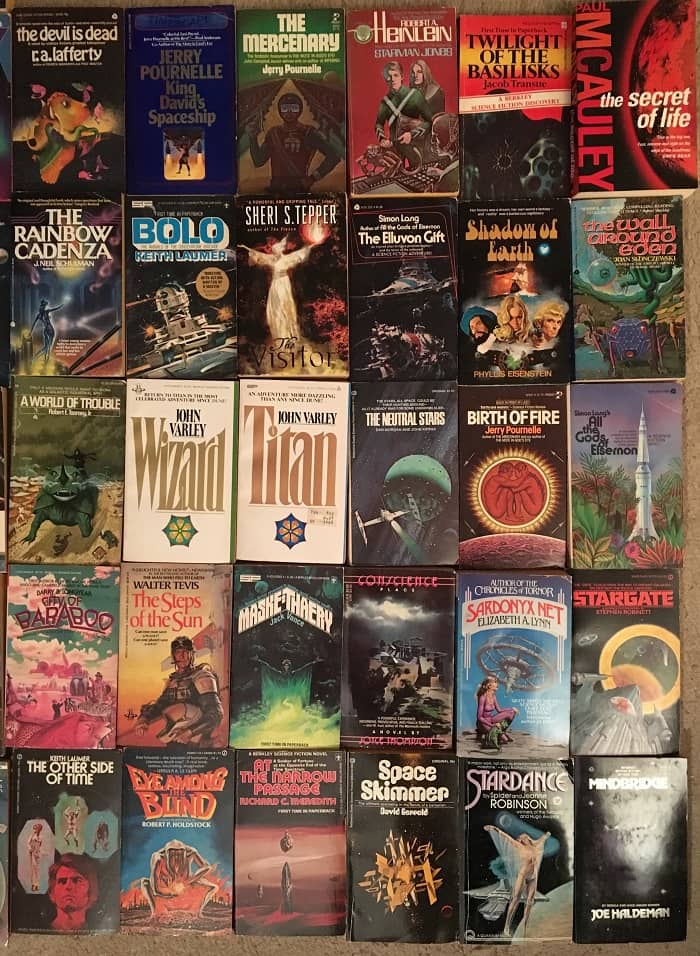 As much as I’d like to, I can’t read all these books — or even most of them. 48 of them went into storage in my basement. But I pulled out 15 that I found especially appealing. They were added to the stack by my big green chair.

These books alone were entirely worth the $18 purchase price. With luck, I’ll report on most of them here as Vintage Treasures over the next few months. 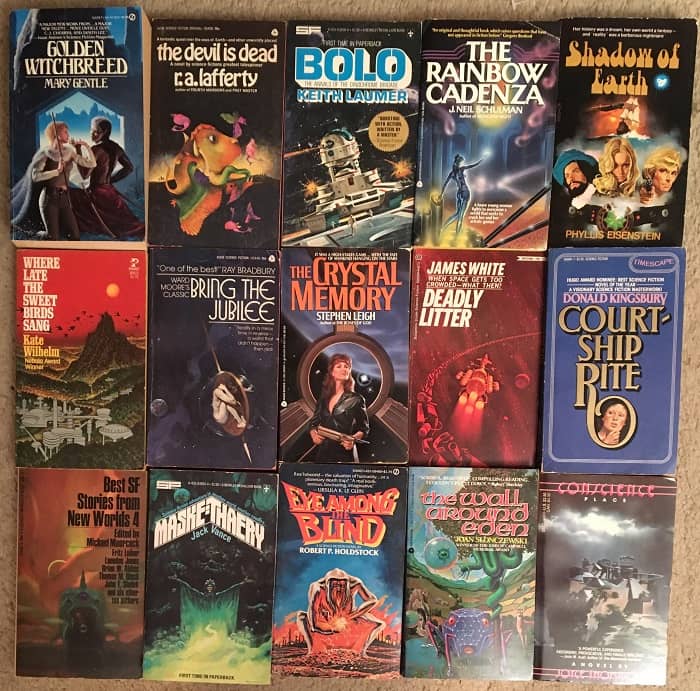 Well, after a bargain set of books like that, I didn’t need to be hit over the head. I jumped back on eBay to see if the seller, palilogy, had any additional lots. By that time several other excellent sets had been snapped up, including two terrific vintage paperback collections of 50 titles each that both sold for $20.

But there were several others I managed to acquire quickly:

I wrote about the Terry Carr volumes here, and the Del Rey collection (including Carr’s The Best Science Fiction Novellas of the Year #1) here.

If you’re a paperback collector (or want to become a paperback collector), buying sets like this on online auction sites is a great place to start. Where else can you get 18-24 months of terrific reading for roughly the cost of two modern paperbacks? There are a lot of older collectors and used bookstores liquidating inventory online at bargain prices, but that won’t always be the case. Do yourself a favor and see what’s available. I think you’ll like what you find.

Nice! I don’t think I ever had that reader’s guide to SF, but the Reader’s Guide to Fantasy led me to a number of great books & authors.

(Also, in that middle link: Saberjahen?)

I’ll have to add The Reader’s Guide to SF to my list, and let you know!

(Also — good catch! That should have been Saberhagen, of course. I fixed it.)

Nice score, John. I wonder how long it will be before you open that box back up…

Though I know nothing about the book or it’s authors, THE NEUTRAL STARS caught my eye.

Nice haul there John. Quite a mix. My eye keeps going back to Space Skimmer. Think it’s the font. Looks like a panther Sci fi book?

Aw man, you scored The Devil is Dead! I’ve been on the lookout for that on eBay for months.

* I had a copy on my Watch list for some time, for like ten bucks. When I was finally ready to pull the trigger and snag it, someone else had bought it.

Great score! The condition of the books look amazing!

> Though I know nothing about the book or it’s authors, THE NEUTRAL STARS caught my eye.

Nice pick! The Neutral Stars is the third book of the Venturer Twelve trilogy. The other two were A Thunder of Stars (1968) and Seed of Stars (1972), all written with British writer John Kippax. 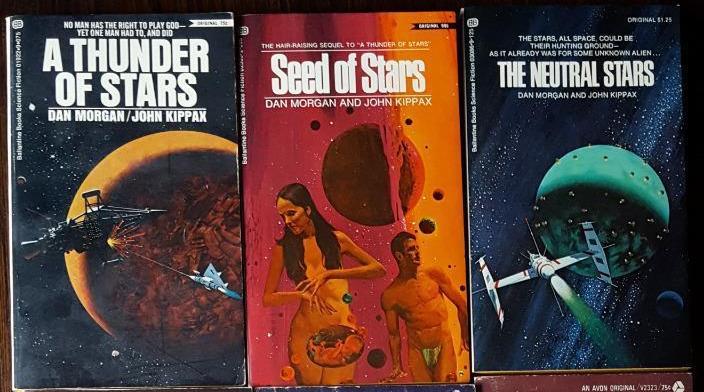 Apparently Kippax wrote a fourth book all on his own, Where No Stars Guide, published by Pan in the UK in 1975. Definitely worth a future Vintages Treasures post, I think. Anybody out there read these books?

> My eye keeps going back to Space Skimmer. Think it’s the font. Looks like a panther Sci fi book?

Good guess, but that’s the 1972 Ballantine edition of David Gerrold’s Space Skimmer, his first solo novel (he co-wrote The Flying Sorcerers with Larry Niven in 1971). The cover is by Dean Ellis. According to ISFDB there was a 1981 Del Rey reprint, and a 1987 British edition from Arrow Books.

> Aw man, you scored The Devil is Dead! I’ve been on the lookout for that on eBay for months.

Yeah, that one is a hard find! I have another copy I got a few years ago. If I can dig it up out of my basement (speaking of hard find…) I’ll mail it to you.

> Great score! The condition of the books look amazing!

That it is! It’s almost always a crapshoot on eBay, as the pictures can be misleading. But in this case, they’re exactly as good as they look — better, in many cases. Most of them are pristine and unread. There are a few bent corners, but it looks like those happened in shipping.

Great haul! Some marvelous books.Looking forward to your reports, especially on the Eisenstein and the Lafferty.

I’ve read the Morgan/Kippax novels. I didn’t feel like they were a waste of time to read, but the only one on my reread list is probably The Neutral Stars. They’re frosty books, full of off-putting characters. That won’t usually bother me if the story has a lot of forward momentum, but these didn’t, as I remember them. But each one was interesting enough that I wanted to read the next one–until Where No Stars Guide, which I didn’t know about.

Hi John.
Glad to see that Conscience Place turned up in your pile!
Jericho Hill Publishing just reprinted it–using the scanning equipment that saved The Poison Papers from the oblivion Monsanto and the EPA would have preferred.
I re-read it for the first time in 30+ years, and was kind of gobsmacked. If you’ve read it, I’d be honored if you’d review it on Amazon or anyplace else.
Thanks for your kindness to aging authors…..

Thanks for putting Conscience Place in your pile. Did you read it?
I did recently, as it’s been reprinted.
I think it still matters.
Would love it if you were willing to review it if you’ve read it recently.

Thanks so much for finding my little article, and leaving a comment. Sadly. although I spent many hours fondling these books over the Christmas break, I have completed very few of the novels. I haven’t read CONSCIENCE PLACE, although it remains in my TBR pile.

I’m very pleased to hear that the book held up fo you, 30 years later. Would you ever want to share the experience of re-reading your book with our readers?