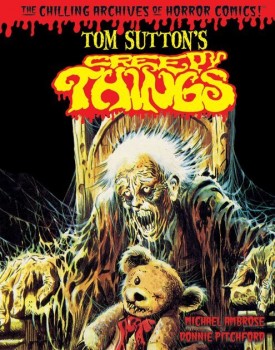 Nobody does good horror anthology comics any longer. Oh sure, some micro-press might release an issue here and there every couple of years, but it’s not like the days when you could go to any drug store in the country and find a dozen different horror collections on the spinner racks. Horror anthology comics first got big in the 1950s, before the Comics Code brought an end to all of that gory goodness. Flash forward to the Bronze Age of Comics (beginning roughly some time in the early 1970s), when the children who’d read Golden Age comics had grown up and gone into the industry for themselves. Bronze Age horror comics borrowed heavily from Golden Age titles like Tales from the Crypt and Chamber of Chills. But since they could never match those titles for outright gore (the Comics Code still being in place), they instead relied on sheer weirdness. And if you’re researching weird 1970s horror (which I frequently do), you’re going to run across the name Tom Sutton.

Just like in the 1950s, every comic book publisher in the 1970s printed at least a couple of horror anthology titles and each title achieved a different level of success. DC Comics had almost a dozen different titles at the height of the horror boom (House of Mystery, House of Secrets, Witching Hour, Weird War Tales, Secrets of Sinister House, Ghosts, Secrets of Haunted House, Tales of Forbidden Mansion, Weird Mystery Tales, Unexpected). Marvel Comics had fewer anthology titles, specializing instead in recurring monster books (Werewolf by Night, Monster of Frankenstein, Tomb of Dracula). Warren slipped around the Comics Code by publishing black-and-white oversized “magazines” that could have more violence and nudity (Creepy, Eerie, Vampirella). And all but forgotten in the comics shuffle is Charlton Comics, always less popular than Marvel, DC, or Warren. Part of the problem was that Charlton notoriously offered some of the lowest pay rates to artists and writers, making them less popular for the A-list talent.

On the other hand, what Charlton could offer was far less editorial interference. As long as the art and story didn’t violate the Comics Code, they gave their artists and writers a free hand to tell whatever stories they wanted. It’s likely one of the reasons that comic legends like Steve Ditko frequently worked with them. And it’s why Tom Sutton’s most interesting work was done for their titles (The Many Ghosts of Doctor Graves, Ghost Manor, Haunted Love, Ghostly Haunts, Midnight Tales, Haunted, Monster Hunters). The folks at Yoe Books have collected sixteen of those stories in a stunning hardcover collection. It opens with an overview of Sutton’s career written by Michael Ambrose, followed by a selection of old cover illustrations, then the first story.

If there is such a thing as a “standard” killer teddy bear story, then “Terrible Teddy” likely hits all of the usual marks. A criminal runs over a child while fleeing the police, only to be pursued by the child’s teddy bear. It doesn’t sound like much of a threat, but circumstances place our protagonist in a position where he’s helpless to escape the plush predator. And Sutton’s rendering of the teddy bear slowly shifts from discarded toy to evil mutant bear.

“The Weirdest Character I’ve Ever Known!” is set in the mansion home of a popular horror novel writer. It seems that the mansion is populated by every monstrous character that he ever created, but honestly, if you accept that a horror writer can afford a mansion, fictional characters coming to life shouldn’t be too much of a stretch.

“Lost in Transit” is about a future society where everyone travels via teleporter. And while the general public is assured that teleportation is perfectly safe and nobody ever gets “lost,” the teleportation engineers are withholding a disturbing truth for reasons far too relevant to the here and now. If you want to see how a story about a couple losing their child can have a positive ending, read this one to the end.

“Mother’s Boy” takes a nice turn as the over-protective and clearly evil mother DOESN’T try to drive away a woman interested in her son. Instead, she encourages them to get together and marry quickly. Even after her death, she continues to exert her influence through the creepiest portrait she could have possibly commissioned. The best unintentionally funny moment is during the wedding, when everyone’s acting oblivious to the fact that a creepy painting is scowling at the officiating priest.

“Journey to Lost Orlaak” is one of those “reincarnated royalty” stories about a maid who dreams of long ago being the queen of Orlaak, an ancient island made of gold that sank into the ocean. And I’m not asking why an island made out of solid gold sank, but rather how it ever floated in the first place. Past and present eventually collide … and then sink.

“Grave Story” is one of the closest to those old-school EC Comics stories, about a strange succession of people robbing and replenishing a grave, all told from the grave’s point of view.

“Where is Cyrus Bull?” concerns a hidden room in the decaying home of a temperance advocate. When a demolition crew starts tearing the place down, they discover the advocate’s dark secret … and his ghost. With so much talk about alcohol and ghosts in this one, I’ve got to hand it to the writer for not going with obvious pun about “spirits.” And while I guess this ending was supposed to be terrifying, I think it turned out pretty well for all concerned.

“The Kilgore Monster” is a sea serpent story that takes some of the fancy language and symbolism of a standard grim prophecy and then makes it all quite literal. Kind of a weird happy ending for this one, as if someone was unhappy with a grim ending and had Sutton add in two more panels.

“Subway Stop” is simply a psychedelic monster mash, because I think every horror comic artist wants to do at least one story where all the classic monsters hang out together.

“Goo” is another sci-fi piece about a slime blob falling in love with an alien computer.

Of course, you’re expecting a werewolf to pop up by the end of “The Game Keeper.” And, sure, you’ll get that werewolf. But you’ll get something extra as well. As an aside, talking werewolves always come off as a bit weird to me.

“The Kukulkaton” starts off as yet-another Cthulhu knock-off story about an unspeakable ancient evil that demands regular sacrifices of human hearts. Frankly, lots of monster stories are set around cracking open rib cages and removing a still-beating human heart. But this is the first story I’ve read that actually answers the question, “What does the monster DO with all of those hearts anyway?”

“The Well” is one of those “mysterious wish granter” stories that only works if there’s some cleverly ironic ending. Here it just sort of wraps up without any answer of how nobody noticed all of the corpses that were getting dragged up to the well.

“The Tower Maiden” plays with the “damsel in distress” trope very nicely. I’ve seen a few of these stories where the “damsel” turns out to be something other than what she seems. But this twist actually surprised me.

Another standard EC Comics trick was to adapt old Ray Bradbury stories (sometimes with his permission and at least one time without). “Bones!” follows that tradition by very clearly mimicking his story “The Skeleton.” Of course, Sutton adds a second shock ending that’s nowhere near as disturbing as his creepy-looking boneless man.

The collection wraps up with “Through a Glass Darkly.” Between the cover and the story itself, we see that Tom Sutton knew how to draw psychedelic madness like no one else. The vision of chaotic galactic horror rivals the stuff that Steve Ditko was doing a decade earlier in Doctor Strange.

The stories themselves range from generic to clever interpretations of already-worn-out tropes. Character development is generally minimal, since there were only six or seven pages for each story. But the artwork is stunning from beginning to end. Whether it’s black-and-white scans of his original inked pages or reproductions of his many painted covers, it’s clear that Tom Sutton was a formidable talent who deserved more recognition than he ever got.

Tom Sutton’s Creepy Things is actually just one volume in Yoe Books’ Chilling Archives of Horror Comics series. A complete rundown of the series (as well as ordering information for each volume) is available here . An active Facebook group can be found here. And if you just want to dive into a stream of classic comic horror stories, check out The Horrors of It All.

Michael Penkas is an infrequent contributor to Black Gate and author of the mystery novel, Mistress Bunny and the Cancelled Client. He maintains a website at www.michaelpenkas.com.

I read an interview with Sutton in the Comics Journal, in his later days. The interview left me tremendously impressed with his talent (from the art reproduced with the interview) and also saddened at what hard living had done to him. He never really found the perfect vehicle to become a star.

Maybe worth noting he did some Star Trek comics for DC in the 80s, which he felt (and I tend to agree with him) were really let down by poor inking.

I bought this book recently!
Love it! Well worth it.

Also check out the “I, Vampire!” analogy. Think highly inspired by Dark Shadows. Sutton did most of the artwork, and there’s early Kaluta and other now famous name stuff. The “Final Chapter” story is where he really matured his art…and alone worth the book. Also “The more things change” lots of 70s issues that reflect to today. Unlike a lot of “Mainstream Fiction” there is plenty of sub-elements in the fiction – the major one the Vampire’s fighting his need for blood and guilt over it were done to be akin to alcoholism, written when the “Comics Code” still would have forbidden it.