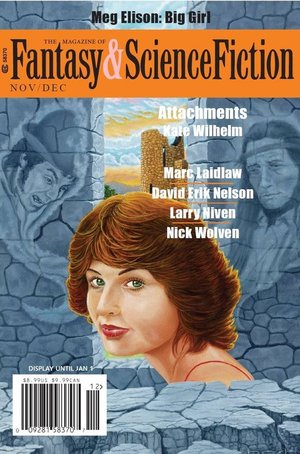 The star-studded November/December issue of F&SF contains some pretty big names, including a huge novella from Marc Laidlaw, a short story by Larry Niven, and a story by Kate Wilhelm who, at 89, has been absent from the pages of F&SF for too long (her last published short story, “The Fullness Of Time,” appeared in 2012). C. D. Lewis at Tangent Online gives an enthusiastic review to the issue.

Marc Laidlaw’s 19,000-word novella “Stillborne” continues a series depicting the fantasy adventures of Gorlen the bard and Spar, the gargoyle whose hand he was cursed to exchange with his own. Like the prior installment from Fantasy & Science Fiction’s [May-June] 2014 issue, “Sillborne” is set in the company of religious leaders whose values and priorities are calculated to entertain… Humor is definitely the story’s greatest strength, and it is on display best when Laidlaw pens conversation between Gorlen and his rediscovered lover…

Larry Niven’s “By the Red Giant’s Light” is a short story about two characters who spend what turns out to be more than an ordinary human lifetime responding to a danger to the last human (albeit rather modified) in the solar system. It’s set at a time the Sun’s expanding diameter has engulfed Mercury’s orbit. The initial hook — the difficulty of telling the human from the robot from their exteriors — gets us into the story’s heart, which is the human’s plea for help against an asteroid due to destroy Pluto and, with it, the last intelligent life in the solar system… solid SF, worth reading, and [it] reminds us why we’ve loved Niven for decades.

If (like me) you’re intrigued by Marc Laidlaw’s tale of Gorlen the bard and Spar, editor C.C. Finley tips us off that there are more to be had.

Gorlen debuted in the October 1995 issue of F&SF with “Dankden” and has returned six times since, most recently with the cover story “Rooksnight” (May/June 2014). Marc Laidlaw tells us this new adventure may not be the conclusion of Gorlen and Spar’s story, but it is certainly a conclusion.

Gorlen and Spar have also appeared in Lightspeed, beginning with the September 2013 issue.

The Gorlen and Spar stories have never been collected, but you can track them down yourself. Here’s the first four I was able to confirm:

And here’s the issues in question.

Here’s the complete Table of Contents of the November/December 2017 issue.

The cover this issue is by Kent Bash for “Attachments.”

This issue is on sale until January 1st. We last covered F&SF with the September/October issue.

Our Late October Fantasy Magazine Rack is here, and all of our recent magazine coverage here.