“The city had yearned to live forever and, over the millennia, had learned how. It had not always been even so much as a city; it had not always known the magic of peace. Peace had come from wisdom; wisdom had come from the hearts of its rulers, and then from the hearts of its citizens. Greed had been banished first, then foul Fury had been driven from its gates. Vengeance had followed, with Spite slithering behind, hissing like a beaten cat. Envy and Prevarication went last, hunted from door to door and expelled like a contagion into the outer worlds. It was said that the city had spawned all the ills of humanity and loosed them upon the world as it cleansed itself. It was said that what had been driven out would someday return.”

And so it did, with a dark vengeance. This is a city of immortals, an eternal city now stuck in the muck and mire near the sea at the edge of time, where all things end. This is a city where death is so unfamiliar, so unknown, that animals slaughtered for a feast must be taken outside the city’s walls in order to be slain. Now the city stands poised to meet its own ending, and its immortal inhabitants face a doom they never imagined.

In the heroic fantasy series featuring Tempus the Black, Niko, and the Sacred Band, City at the Edge of Time takes place between Beyond Wizardwall and Tempus Unbound, (both of which I have previously reviewed for Black Gate.) Although Tempus and Jihan, the powerful Froth Daughter, play important roles in City at the Edge of Time, this is Niko’s story all the way. And once again, Janet and Chris Morris deliver a fantasy novel written with such a surety of hand that it felt as if I was reading an actual, historical event.

It begins when a rain of fish falls from the sky and into the royal stable yard, where Prince Macon and his sister, Princess Tabet are tending to frightened horses. Their father, Genos, is king of this strange, mysterious and nameless city… a city that is a myth from the beginning of time. With this rain of fish a naked man falls from the sky, and I spoil no surprises by telling you that this man is Nikodemos, called Niko, who is Tempus’ right-side partner in war. At the same time Niko arrives in the city, Tempus and Jihan also fall from the sky, landing in a future world, a place where the world ends — at least that world. Is this the doing of the god Enlil, the Stormbringer, whose avatar is none other than Tempus himself? If so, to what purpose? As events play out during the course of the novel, those questions and what role the Storm God plays will be revealed. So Tempus and Jihan set out in search of Niko. Meanwhile…

Princess Tabet is a young and impressionable woman, and she’s instantly attracted to Niko, and thus takes it upon herself to tend to him until he recovers. Not surprisingly, she falls in love with Niko, who is not immune to her charm and beauty, and soon they are to be wed. And yet there is conflict between Niko’s heart and his allegiance to Tempus. He’s surrounded by the riddles and mysteries of the city and its royal family; he seeks to get at the heart of one, and unravel the other. If only Tempus and Jihan were there with him, there to help him. But he’s all alone, has no idea where his companions might be, and is lost in this strange city. And the warlocks and priests of the city, where all worship the storm god Enlil, decree that Niko must take a test: if he fails, the world swings one way; if he passes, it swings in another direction. Would failing this test mean death for Niko? He doesn’t know, doesn’t even want to contemplate such a thing, but he does everything he can to postpone this test, to find out what it is in order to prepare himself to do whatever needs to be done.

Tabet’s brother Macon believes that Niko is evil, and he doesn’t want his sister running away with him, like their mother — who was possibly their father’s own sister — ran off with another man. Macon is also secretly in love with his sister. Jealousy clouds his mind; he wants to marry Tabet and assume the throne, and so he conspires with a warlock named Seth in order to achieve his desires. But Macon can’t have it both ways. According to Seth, to take love away from Tabet, another love must be given. Seth says he will help Macon, in exchange for Tabet’s hand in marriage. Macon reluctantly agrees, and he and Seth plot with sorcerous deeds and a murderous act that set future events into motion. As for Niko, he’s trapped in this city, mired in its politics, religion, magic, and the machinations of Seth, Macon, and even Tabet. For Niko, who is the only mortal in this city at the edge of time, the city could destroy him with its immortality.

During the feast celebrating Princess Tabet’s betrothal to Niko, everything changes for Macon and Seth when King Genos names her king. Seth, however, has concocted a love spell that turns Tabet’s heart away from Niko, and she spurns him. Niko feels betrayed; the sparks of love have been put down, and now he’s truly without an ally in the city. He’s become a pawn in the game Macon and Seth play in the name of love, and the love of power. Everything then changes when Tempus and Jihan arrive in the city and are admitted to the feast, where they are reunited with Niko. This is when sparks of a different kind are fanned into flames — literally and figuratively. For Seth the warlock and Prince Macon have plotted to set a fire during the funeral of the woman they murdered, a fire to serve their own needs, and one that soon gets out of hand and threatens the city. Together, Niko, Tempus, and Jihan fight to save the eternal city of immortals from destruction. All hell then breaks loose as Niko and his companions set out to confront Seth in his sorcerous lair. 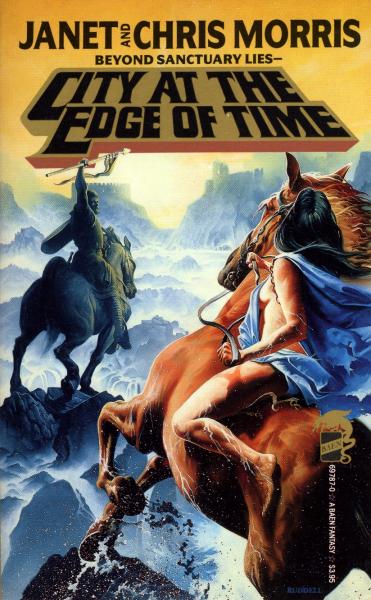 Once again, Janet and Chris Morris have written a novel full of action, suspense, and human drama. Every main and major character is fully realized; we get inside their heads and their hearts; we understand their motives, sympathize with them, and even have some empathy for the weak and wayward Prince Macon. This novel is so rich in texture, so intricately plotted that I was hard-pressed to write a synopsis: what to leave in and what to leave out were tough choices to make. Politics and religion play important roles because they are integral to the characters and their city. Magic, too, is important, and it’s used with a realism I find refreshing. Dialogue reveals and defines each and every character; it propels the plot and stirs the action. Prose is, as always, crisp and lean, stark and elegant. In my opinion, Janet and Chris Morris may have topped themselves in this one. For example, here’s Niko’s impression of his first glimpse of the great hall where the feast celebrating his betrothal to Tabet is to take place:

“. . . the colossi of horses and rams and bulls and wolves were made by sculptors working in a harmony whose knack was lost among the squabbling peoples beyond the city’s walls. Community of effort had produced the vibrant rugs of millions of knots which floored the palace with fleeing demons whom the king of the city hunted through woolly hill and dale filled with mythical wildlife. Consonance of heart had fashioned the great electrum inlaid doors and polished the massive cedar columns which upheld a roof painted with every star a man could see in the sky, each in its proper place, as if the collected wisdom of the city had come from every hilltop on all the earth, and her wanderings had been recorded by faithful scribes.”

If you’ve read the other novels and stories of Tempus, Niko, and the Sacred Band, if you are a fan of Janet and Chris Morris’ style of heroic fantasy, then add City at the Edge of Time to your reading list. Even if you haven’t read the other novels in the series, this is a good place to start, I think. You won’t be disappointed.

Life to you, and everlasting glory.

John O’Neil, once again you’ve outdone yourself. This is a fantastic presentation! The Sacred Band novels are so much fun to review, and my next and last one will be Storm Seed. Thank you very much!

Pleasure to have you on the blog as always, Joe!

Thank you, John. It’s always my pleasure to be a part of Black Gate.