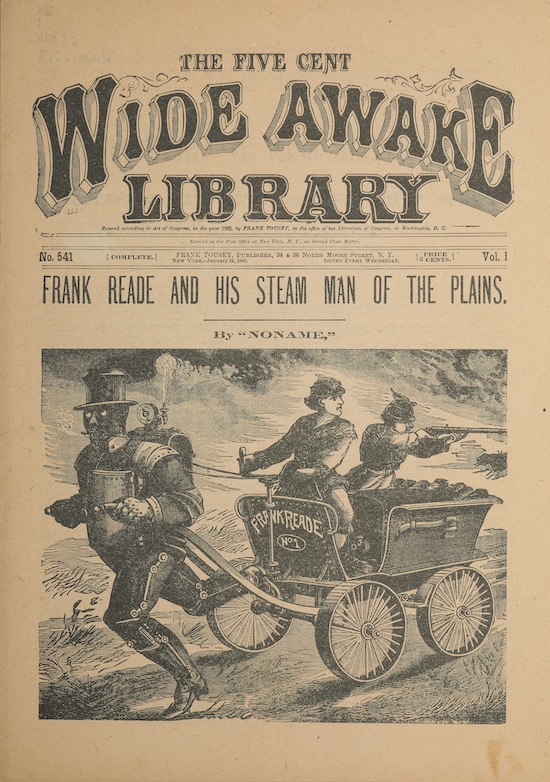 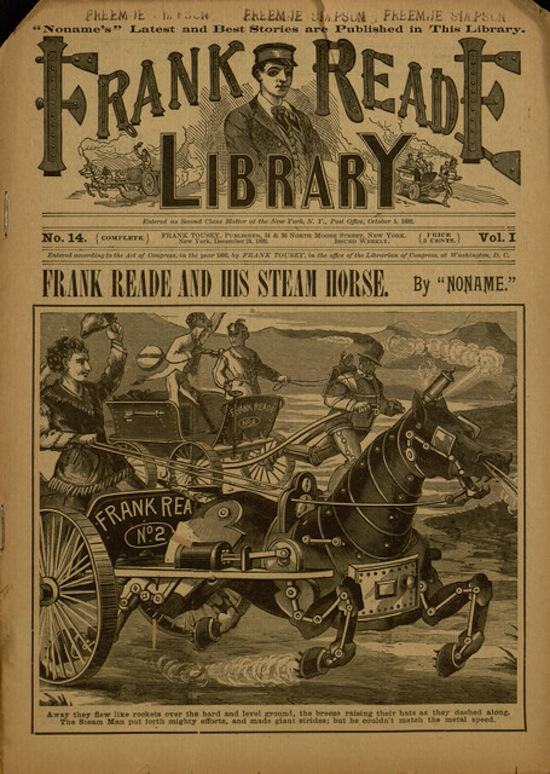 The story follows the adventures of Frank Reade, a plucky boy who lives with his parents in New York and is a child genius, working on various inventions in a shed in the back yard. When his cousin from Missouri, Charley Gorse, comes to visit, you know there’s going to be some fun. Missouri was still the Wild West in those days. Jesse James had been assassinated only the year before and many of his gang were still at large. When Charley asks what Frank is working on, the young inventor takes him into the shed.

Charley Gorse beheld a metallic imitation of a man. The figure was about twelve feet high from the bottom of the huge feet to the top of the plug hat which adorned the steam-man’s head. An enormous belly was required to accommodate the boiler and steam chest, and this corpulency agreed well with the height of the metallic steam chap. To give full working room to the very delicate machinery in the interior, the old giant was made to convey a sort of knapsack upon his shoulders. The machine held in its arms in the position taken by a man when he is drawing a carriage.

Charlie glanced up at the face of the monster and beheld a huge pair of glass eyes and an enormous mouth.

“‘Now then,’ said Frank, ‘the lamp will be in his head, and his eyes will be the headlights. His mouth holds the steam whistle. Here, in his belly, we open a door and put in fuel, and the ashes drop down into his legs and are emptied from the movable kneepan, and without injury to the oiled leg-shafts, for they are enclosed in a tube. That is why the fellow’s limbs are so large. These wire cords increase the power in one leg, and cause that leg to go much faster, and in that manner we get a side movement and can turn around.’

“‘Go on,’ said Charlie, who was intensely excited.

“‘Its feet are spiked like a baseball player’s are spiked, to prevent the machine from slipping under speed,’ said Frank. ‘Then you notice that its legs are very long, and very far apart, so as to give it balance. This stop-cock on the side will let on or shut off steam.’

Charley is duly impressed and comes up with the bright idea of testing the metal man on the prairies of Missouri.

So off they go. It isn’t long before they get in all sorts of trouble, saving wagon trains from bandits, avoiding herds of stampeding buffalo and wild horses, shooting bears, and generally having the time of their lives.

Stereotype piles upon stereotype. They befriend a drunken Irishmen who plays the fiddle and fights anyone who looks at him wrong, a hapless Englishman who says all sorts of witty things even when threatened with scalping, and of course plenty of “red skins” who talk like this:

“Ugh! White man he talk heap like squaw. Ugh! No brave. He chicken heart now, so we burn him! Ugh! Whogh! He make good fire and roast like chicken. His heart will not burn, and me, Wotzerponum, great chief of Osage, will eat heart!”

Chief Wahoo has nothing on that litany, except this was written more than a hundred years ago and Chief Wahoo is still around today. 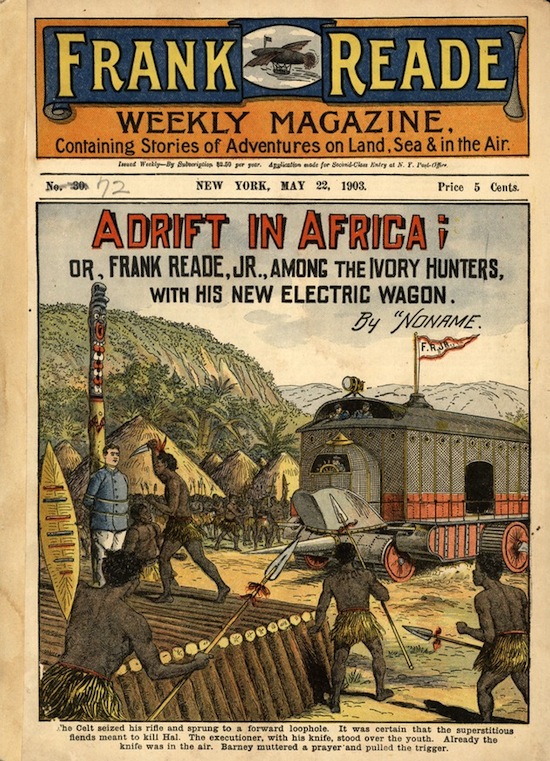 By the turn of the century, steam was old hat and all the plucky
young inventors had switched to electricity. No doubt this title
gives as sympathetic a view of the Africans as earlier
novels gave to Native Americans.

While a whole lot of stuff happens, there isn’t much plot. That’s the way the kids liked it back then. The dime novel publishers urged their writers to waste not a single line. Even though The Steam Man of the Plains runs only 24 pages, it has enough scenes that if it were fully fleshed out into a modern novel it could easily fill ten times that number. Little space is left to characterization (even the whites are stereotyped as Good, Bad, or Comical) and the writer does not dwell on the technical details of the inventions. We never learn just what Frank’s “night pistol” shoots, for example. It fires out a glowing ball of something so that Frank can aim and fire the next chamber, which contains a bullet. Handy when shooting bears at midnight.

Sometimes to keep the action going, the writer resorts to ridiculous coincidences. For example, Charley is about to get trampled by a herd of wild horses and so he leaps onto the back of one. Several hours later, the drunken Irishman is treed by a bear. When the bear climbs the tree and is about to devour him, the horses pass underneath and the Irishman jumps to safety, landing on the same horse Charley is still riding!

To the modern reader it’s an insane trip, at turns hilarious and offensive, but even after all this time it’s never dull.

For more on the early history of steampunk, check out the excellent post on Steam Men and Electric Horses on the Yesterday’s Papers blog.

Wow — I think I’ve seen the Wide Awake Library cover elsewhere, but I hadn’t realized that it did actually date to the 1880s — I thought it was a modern invention done as a deliberate throwback.

I remembered seeing mention of this work in Aldiss’s The Trillion Year Spree.

The web site Comic Book Plus has a section of Pulp reprints and there are quite a few of the Frank Reade dime novels posted along with other items that you wonder what sort of collector mentality was going on that people kept these all these years in an age before plastic bags. My ONLY complaint with the site is you have to scroll the page to be read up and down and sometimes the Next Page arrow skips ahead.