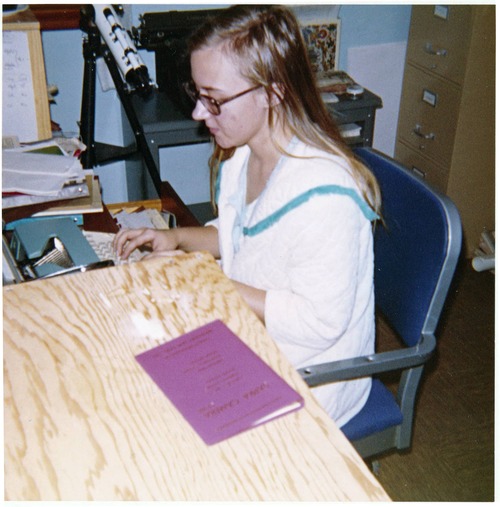 The young author with her first electric typewriter!

This guest post by Julie Czerneda is part of the #againstthedark blog tour. Enter a comment below to be entered to win her latest book in hardcover, To Guard Against the Dark, plus a mass market of The Gulf of Time and Stars (US and Canada entries only, please). To enter the tour-wide giveaway of the entire nine-book series, click here before October 16th at 5pm EST.

Once upon a time, there was an unpublished, (and never-thinking-to-be-published) writer named Julie, who would scribble her stories on paper (which she scrunched up to make taller stacks that whispered and rustled in a lovely, ever-so-literary way), when not typing with two fingers on the ancient and indestructible Underwood typewriter her mother gave her. (Then, yes, would scrunch up the paper to make taller stacks.) Eventually, Julie’s stacks burst from her desk drawer. Her mother found her a used portable electric typewriter and filing cabinet, suggesting she stop scrunching and write.

And that’s what Julie did. Her process evolved to feature pages not only flat and unrumpled, but kept within file folders, titled meaningfully as I, II, III, etc. Buoyed by this professional turn in her life, Julie took a high school typing class, (this being long long ago as well as once upon a time) though her teacher was unsettled by her earnest reason: to type quickly enough to capture the dialogues in her head. You see, dear readers, at this point what Julie wrote was simply dialogue with occasional action. Description? Why?

She knew how everything looked.

In university, Julie gleefully added file folders of biology bits to her filing cabinet, referenced by such titles as “Weird.” Her story folders had reached XXIII, and pages from the rest had begun to sprawl into a few binders, mostly because she’d acquired a hole punch. Julie wrote of this and that, occasionally dabbling in description, but never bothering to finish or edit because, well, it was all for fun.

Until Julie fell in love.

Be unconcerned. Romance and happily ever after with Roger didn’t change her process a whit. Julie continued as before, writing between bouts of homework, or marking, or whenever the urge struck.

Being in graduate school, however? 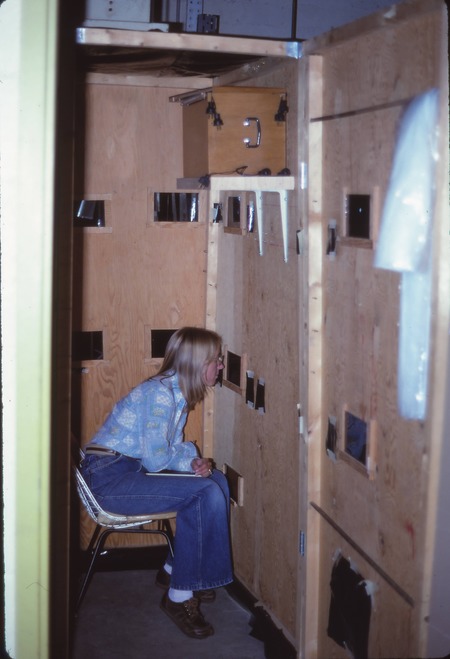 Meant a new kind of story. The day came when Julie paused whilst analyzing her measurements of nostril variation in sexually active fathead minnows, having grown curious. What if?

She pulled out the folder marked “Story X” and thought… what if, indeed.

Then wrote, faster and faster. Suddenly Story X had more than a cool setting and characters she liked. Story X had Julie’s burning curiosity to satisfy: what if an intelligent species deliberately bred itself to increase a reproductively linked characteristic? (Julie, then and now, thinks like that. Some processes don’t evolve as much as others.) Story X had acquired purpose, one Julie would happily pursue for years.

Her curiosity transformed Story III as well. While marking student graphs of number of progeny versus longevity per species, Julie drew her own, being curious, and stretched the line to infinity. How could she design a species like this, almost immortal, reproducing rarely, with the care of offspring lasting centuries? Why they’d need control over their own matter and energy to stave off cellular senescence, which — how fun! — would make them shapeshifters too. They’d hardly be bored, being… curious. Thus Esen and the Webshifters were born, quickly assimilating everything in her “Weird” biology folder. (Terraforming and invasive species went elsewhere.)

Satisfied, Julie kept her folders neatly in their cabinet, adding to this one or that, and nothing more would have happened, for she was content thus, but suddenly…

Roger, her other half, discovered what was in those heavy filing cabinet drawers he’d been carting up and down stairs to various apartments for years. Not study notes. Stories. None of it had been secret. It just hadn’t come up.

Lightning might have struck. Julie found herself the bemused, if proud owner of a new IBM Selectric, upping her typing speed immensely, as well as a dedicated Roger-made desk for it. Second? Roger suggested she finish her stories.

Well, that didn’t happen. Not then. But writing more? That did. Every Thursday, in fact.

The tale’s been told before how Julie went from scientist to textbook author, because friends learned she wrote. How Roger and others encouraged her till she finally agreed to try this fiction publishing thing and finished Story X. And how, after all manner of oddness, Sheila E. Gilbert of DAW Books bought Story X (A Thousand Words for Stranger), released twenty years ago October, followed by Story III (Beholder’s Eye).

After that, Julie found herself writing stories for a living and her process? Evolved again, profoundly. Oh, editors and deadlines weren’t new. She’d already moved into the digital age, albeit via floppy discs and dot matrix, and to be paid to write stories made her chortle with joy. What was unexpected?

Remember this is a tale of writerly process, of the evolution and change in how. Learning her for-herself stories were being read by others Julie thought she could manage, but some of those others? They read her work the way she read and adored stories by her favourite authors. These readers wrote to tell her so. Julie hadn’t ever written a fan letter herself. Till this point, she’d not imagined even meeting one of her favourites either.

Her readers came to meet her.

Julie was astonished, then thoughtful.

In every tale, there’s a moment of decision. Julie’s, like any author’s, was thus: to  wholeheartedly engage with readers — who were strangers, then — or to let her stories speak for her? Neither choice was wrong. 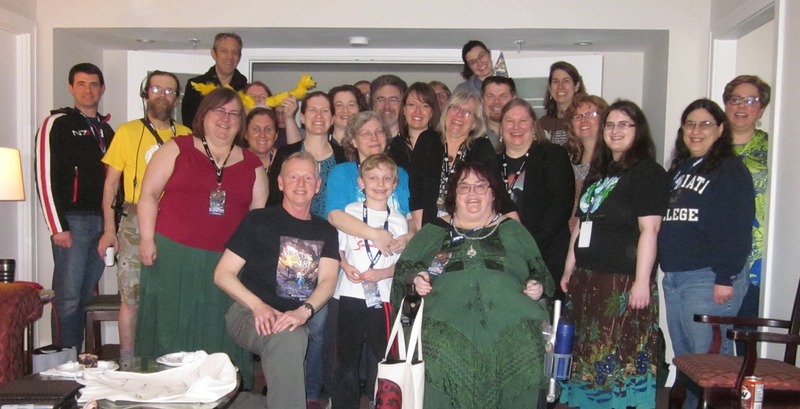 Julie with her readerly and writerly friends

Thus her process evolved. Julie added readers to her daily routine. She sought mediums that fostered interaction, whether answering mail or finding ways to be reachable or attending conventions. To her delight, she discovered her favourite authors were wonderful, approachable people, some of whom reading her work. And while she could write more if she didn’t spend time with others?

Julie came to understand she might not write at all, if it was only for herself. That what she’d been doing alone, those years ago, was preparing to be here, in a place where she shares who she is and what she does. And hears from you.

You see, dear readers, this is the thing. The moral, if you like.

A story isn’t about words in a scrunched piece of paper, or neatly tucked in a filing cabinet — or on a flash drive. A writerly tale isn’t about the writer, or how she writes, or even what. As for readers?

Is the moment all three meet. 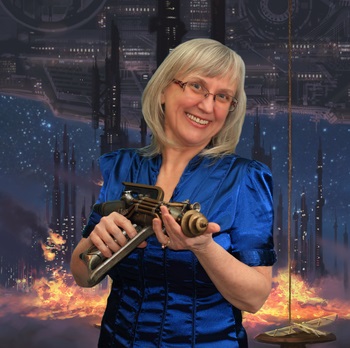 Julie’s also written fantasy, the first installments of her Night’s Edge series (DAW) A Turn of Light and A Play of Shadow, winning consecutive Aurora Awards (Canada’s Hugo) for Best English Novel. Julie’s edited/co-edited sixteen anthologies of SF/F, two Aurora winners, the latest being SFWA’s 2017 Nebula Award Showcase. Next out will be an anthology of original stories set in her Clan Chronicles series: Tales from Plexis, out in 2018. Her new SF novel, finale to that series, To Guard Against the Dark, lands in stores October 2017. When not jumping between wonderful blogs, Julie’s at work on something very special: her highly anticipated new Esen novel, Search Image (Fall 2018). Visit www.czerneda.com for more.

The Clan Chronicles is set in a far future where a mutual Trade Pact encourages peaceful commerce among a multitude of alien and Human worlds. The alien Clan, humanoid in appearance, have been living in secrecy and wealth on Human worlds, relying on their innate ability to move through the M’hir and bypass normal space. The Clan bred to increase that power, only to learn its terrible price: females who can’t help but kill prospective mates. Sira di Sarc is the first female of her kind facing that reality. With the help of a Human starship captain, Jason Morgan, himself a talented telepath, Sira must find a morally acceptable solution before it’s too late. But with the Clan exposed, her time is running out. The Stratification trilogy follows Sira’s ancestor, Aryl Sarc, and shows how their power first came to be as well as how the Clan came to live in the Trade Pact. The Trade Pact trilogy is the story of Sira and Morgan, and the trouble facing the Clan. Reunification concludes the series, answering these question at last. Who are the Clan?

And what will be the fate of all? 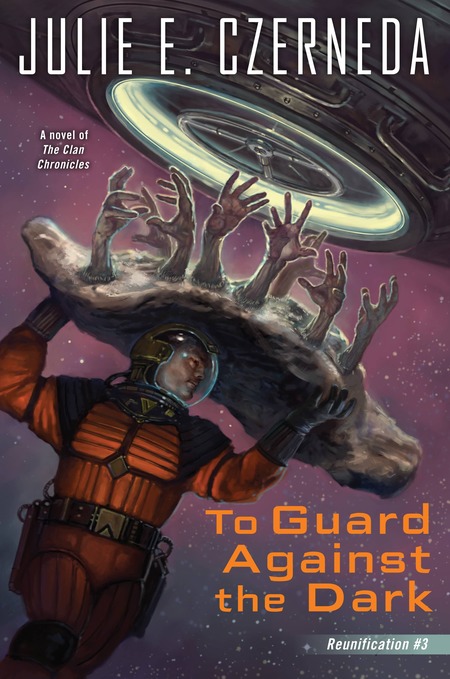 What a wonderful piece! There are few things I enjoy more that getting a look at the process of an author putting the words on the page. Thank you.

And, “chortle with joy”? How delightful.

Thank you! I had fun writing it, especially digging out those photos. Might have chortled then too.

It’s hard sometimes for us readers to imagine our favourite authors as regular ordinary people, that is why conventions are so great. I’ve had the pleasure of meeting some of my favourite authors, my first was Spider Robinson who just as warm and funny as his books led me to believe. And that gave me the courage to walk up to you in a corridor at World Con and you couldn’t have been nicer. I’m glad to hear that you also get something out of meeting you fans because we surely do!

Awww! Most appreciated! I definitely do, especially when it’s someone as nice as you!

I felt like a kid at Christmas when I recognized Julie across the room at my first Con. She was the reason I, a past-middle-aged woman, was there with the steam punkers and D&Ders. And when I caught her eye & she motioned me over, I nearly fan-girl swooned! Over drinks that night and breakfast the next morning (with other Julie-fans), I learned that she was a thoroughly delightful, totally genuine person who, indeed, cared about us, her readers. We may never get a chance to meet again (!) and so I will hold that weekend dear. Thanks, Julie! It was fun building beings with you!

Thanks, Cyn! It was amazing meeting you too–like old friends from the start–and I’m sure our paths will cross again.

No one writes like Julie, she is simply sublime. It has always been an honor every time I’ve gotten to work with her through the years. A true class act with a kind and generous spirit.