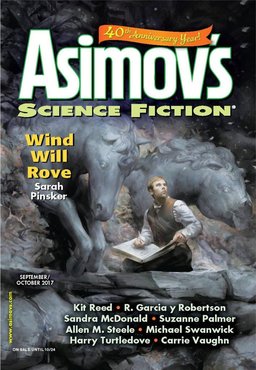 Saturday I visited my local Barnes & Noble here in St. Charles, which has an excellent magazine rack, and spent too much money on a big stack of magazines: Retro Gamer, Rue Morgue Library #11: The Weird World of HP Lovecraft, Analog, F&SF, and Asimov’s Science Fiction. The first one I sat down with Asimov’s, and that’s chiefly because of Sam Tomaino enthusiastic review of the issue at SF Revu.

The September/October 2017 issue of Asimov’s Science Fiction has a lot of very good stories including one Hugo-worthy. The fiction begins with the novelette “Wind Will Rove” by Sarah Pinsker. -+- Rosie Clay is of the third generation on a generational ship, her grandmother was one of the originals who started on the voyage. Rosie Clay is in her 50s, teaches history, and regularly plays her grandmother’s old fiddle with other traditionalists. One important song is from 1974, called “Wind Will Rise.” One of her students does not want to learn history and wants the past ignored. How can she best deal with this rebellion? A beautiful, poignant tale.

“Universe Box” by Michael Swanwick -+- Another story this month, from one of the best. Howard Pendleton is going to ask his girlfriend, Mimi, to marry him on Valentine’s Day in the most boring, conventional way possible. Mimi anticipates this and is going to dump him. But someone calling himself “Uncle Paulie” arrives at Howard’s door and turns his life inside out. He is a traveler from the stars and has pulled off a tremendous heist. This all starts a wild romp of a story which was loads of fun to read. Swanwick is a devotee of that most original writer R.A. Lafferty and R.A.L. would have got a kick out of this story! This will be on my Hugo Shortlist for Best Novelette next year!

“Dead Men in Central City” by Carrie Vaughan -+- Ricardo must shoot his horse when it breaks two legs and he winds up in the nearby boom mining town of Central City, Colorado. In a bar there, he meets a man who coughs a lot and is dealing faro — one Doctor John Holliday. Ricardo gets a room that shields him from the sun because he is actually a 350-year-old vampire but he only takes as much blood as he needs. Holliday knows what he is but they wind up with some mutual respect for each other. Great little tale!…

Here’s Sam’s thoughts on an alternate history tale of World War II by Harry Turtledove, a D&D story by Tim McDaniel, and the fifth tale in Allen M. Steele’s Arkwright sequence, which began with “The Legion of Tomorrow” in the July 2014 issue.

“Zigeuner” by Harry Turtledove -+- Hauptsturmfürher Joseph Stieglitz, an SS Officer, is in western Hungary in the Autumn of 1944. The German army is being pushed back by the Russians. Will they be fighting in Germany soon? Nonetheless, they are ordered to round up a group of Zigeuner nearby. The group has probably lived in Hungary for centuries but kept their ways and language with their dark eyes and their traveling wagons. They will be transported to a camp in Poland for what Stieglitz does not want to think about. A hint of the alternate history comes from what is mentioned of the Führer’s war experience but how alternate comes at the end and I won’t spoil that. Another great job by Turtledove…

“An Incident in the Literary Life of Nathan Arkwright” by Allen M. Steele -+- The introduction tells us that this is an untold story related to his novel Arkwright, part of which appeared in Asimov’s. The character of Nathan Arkwright was introduced in the July 2014 issue which began with his death. He had been a famous science fiction writer, “creator of the Galaxy Patrol” and ‘one of the “Big Four” sci-fi writers of the 20th Century” (with Heinlein, Asimov, and Clarke). It tells the story of why Arkwright stopped going to conventions in 1975. At a convention in Nashville, he meets two polite, devoted fans named Peter and Barbara Shepard. They invite him to dinner and take him for a long drive. They urge him to keep writing his Galaxy Patrol series for a bit longer. But things take a scary turn. Great to have a look at a character I’d only seen a little of in that first story!

“Squamous and Eldritch Get a Yard Sale Bargain” by Tim McDaniel -+- Squamous, rare book dealer, fails to get an ancient tome with pentagrams on it at a yard sale. A woman buys it for two dollars because she thinks her niece who plays Dungeons and Dragons might like it. So he calls in his partner, Eldritch. I won’t give it away but the end is quite funny and will please everyone who does not like to see a book disrespected.

Here’a all five stories in the Arkwright sequence to appear in Asimov’s SF:

For you collectors in the audience, here’s the other issues you need to track down.

As usual, Sheila Williams summarizes the issue on the website.

Powerful novelettes bookend Asimov’s September/October 2017 issue. Sarah Pinsker’s lyrical tale set aboard a generation ship shows us that humanity may have the strength to adapt and evolve as long as “Wind Will Rove.” All that lies between civilization and brutal marauders is an outcast and a library in Suzanne Palmer’s thrilling “Books of the Risen Sea.”

Fall is here, which means the September/October issue has its share of slightly spooky tales: Kit Reed investigates the “Disturbance in the Produce Aisle”; Carrie Vaughn introduces us to “Dead Men in Central City”; Sandra McDonald demonstrates the peril of “Riding the Blue Line With Jack Kerouac”; and William Preston unlocks “The Cabinet.” We learn that it may not be wise to open Michael Swanwick’s “Universe Box”; discover why “Squamous and Eldritch Get a Yard Sale Bargain” in Tim McDaniel’s short story; and climb “The Fourth Hill’ with new author Dennis E. Staples; On the nonspooky side, “Arriving at Terminal: Xi’s Story” and “The Ganymede Gambit: Jan’s Story” reveal the secrets of two more pilgrims in James Gunn’s intriguing series; Harry Turtledove brings us the deeply disturbing tale of the “Zigeuner”; Allen M. Steele returns with a cryptic account of “An Incident in the Literary Life of Nathan Arkwright”; and far flung action continues in R. Garcia y Robertson’s “Grand Theft Spaceship.”

Robert Silverberg’s Reflections column examines the end of empires and the plight of “The Last Hittite”; James Patrick Kelly’s On the Net spends time “Remembering Bertie”; Norman Spinrad’s On Books considers locations “Outside America” as he traverses works by Bruce Sterling, Nnedi Okarafor, Lavie Tidhar, and Indra Das; plus we’ll have an array of poetry and other features you’re sure to enjoy.

Here’s the complete Table of Contents for the September/October issue.

“Riding the Blue Line” with Jack Kerouac by Sandra McDonald
“Dead Men in Central City” by Carrie Vaughn
“Arriving at Terminal: Xi’s Story” by James Gunn
“The Ganymede Gambit: Jan’s Story” by James Gunn
“Zigeuner” by Harry Turtledove
“The Fourth Hill” by Dennis E. Staples
“The Cabinet” by William Preston
“An Incident in the Literary Life of Nathan Arkwright” by Allen M. Steele
“Squamous and Eldritch Get a Yard Sale Bargain” by Tim McDaniel
“Disturbance in the Produce Aisle” by Kit Reed

The cover art is by Cynthia Sheppard.

The issue went on sale August 22. It will be on sale until October 24.

We last covered Asimov’s SF with the July/August 2017 issue.

Our August Fantasy Magazine Rack is here. See all of our recent fantasy magazine coverage here.

I received that issue in the mail about a week ago, and didn’t even peruse it closely enough yet to notice the new story by R. Garcia y Robertson, one of my favorites!

And I received the new F&SF in the mail on Saturday. There’s a new Samuel R. Delany in it! I don’t think I knew he was even still writing.

What a week to be reading short SF!

Delany is definitely still writing, although it’s been quite some time since he he’s written any SF (his novel Dark Reflections appeared in 2007, and Through the Valley of the Nest of Spiders in 2012).