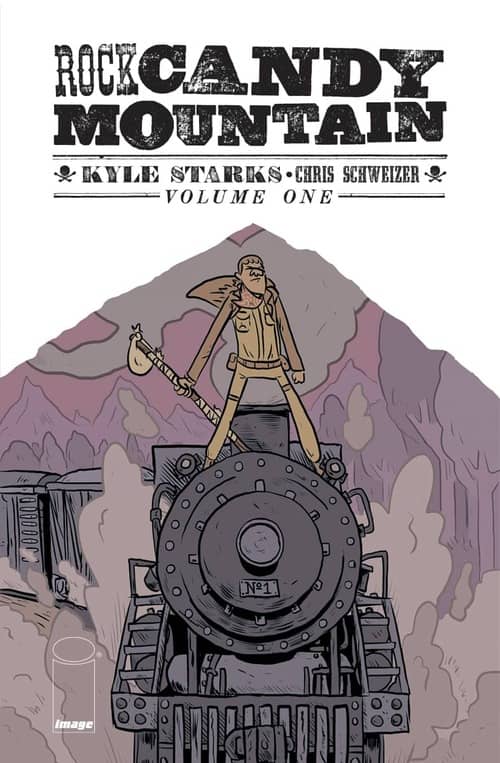 Eisner-nominated comic creator Kyle Starks would like to invite you to enter the magical world of hobos. The world’s toughest hobo is searching through post-WW2 America for the mythological Rock Candy Mountain, and he’s going to have to fight his way to get there. Lots of hobo fights. So many hobo fights. A new action-comedy series full of high action, epic stakes, magic, friendship, trains, punching, kicking, joking, a ton of hobo nonsense, and the Literal Devil. Yeah. The Literal Devil.

Who could turn down a description like that? I had a chance to catch up with Kyle for an e-mail interview about this fiesta of fisticuffs and the hobo code of honor. 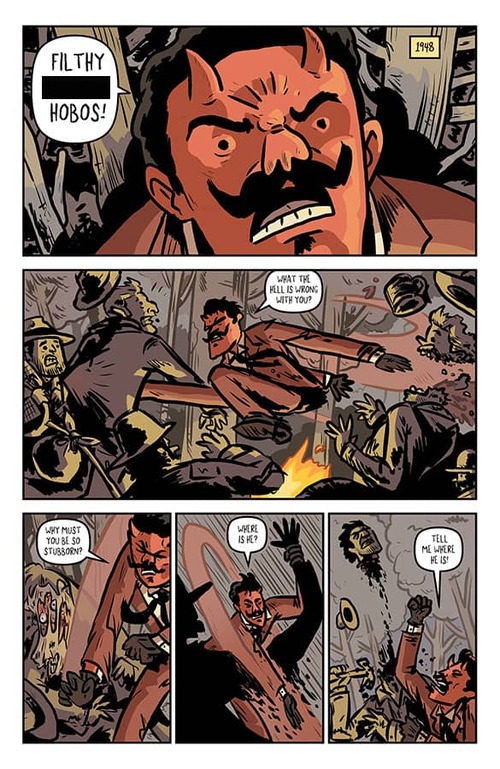 Thanks for the chance to chat, Kyle. I have to say right off, I absolutely loved Rock Candy Mountain! I don’t think I’ve had a good fix of hobo adventuring since Snyder and Tuft’s Severed. What drew you to life on the rails?

I wanted to tell a story that was a cross country epic and something super traditionally American and I felt like hobos were the perfect solution to that. I had, and it remains a mystery why, been reading about hobos before I was sort of hit the idea for Rock Candy Mountain, but it was basically a ton of puzzle pieces all falling together. I’m fascinated with hobo culture and history, though, for sure. 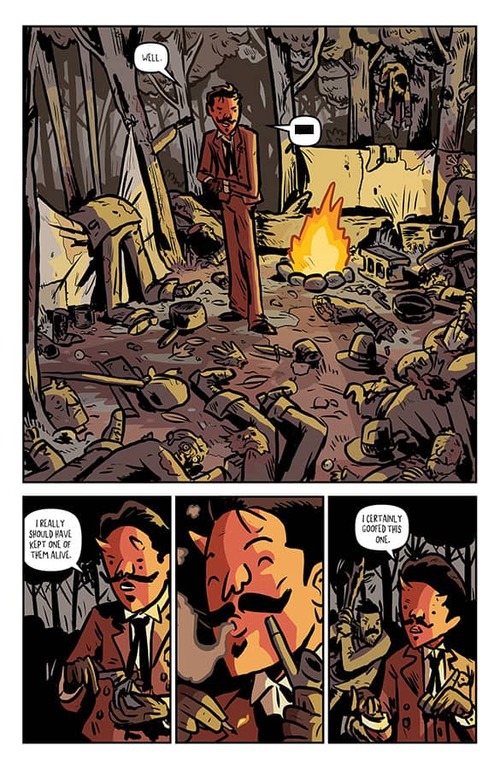 The bad-luck-suffering Pomona is both foil to the hobo fighter Jackson in the buddy movie sense, as well as a fish-out-of-water look at the hobo world. Is the hobo world strange and different enough that you felt you needed someone from outside to translate it for the reader?

I think, yes for sure. But also, I think it’s something that’s been misrepresented more often than not – it’s not just a bunch of homeless people and trains. So I felt the best way to bring that to the readers was to have this sort of entry character – who also is, you know, as much as part of the story as Jackson is. I also didn’t really want to do a lot of hackneyed stuff like a glossary in the back or page footnotes. It’s better if it feels like you, the reader, has been thrown into it. 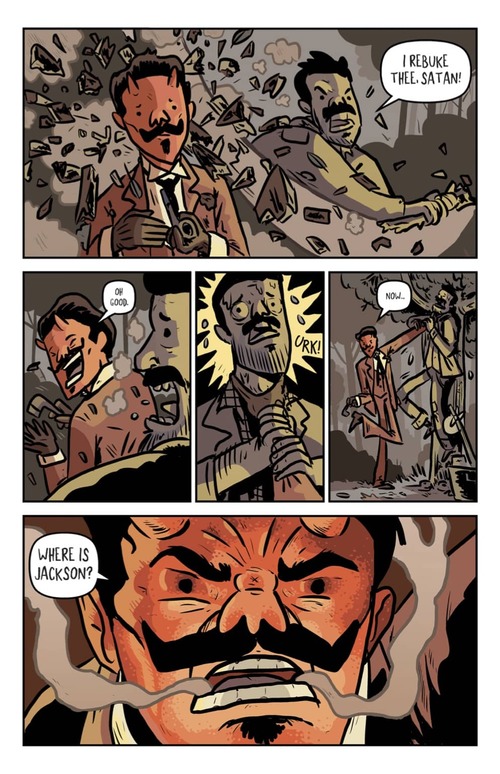 I checked out Rock Candy Mountain because of the hobos, but was swept into the story as soon as I saw the first scene with the Devil dismembering a bunch of people in his search for Jackson. The Devil seems like such a perfect fit for a hobo story. Why do you think that is, and why is your devil so impatient and disgusted with the Earth?

I don’t want to give any spoilers away – but the Devil is crucial to the overall story and Jackson’s specific story. I think there’s also a real rural, post-depression era Robert Johnston feel to the devil that makes it feel like a good fit for this type of story. But, honestly, if you’re going to drop a bad guy into a story there’s no better one than the Literal Devil. 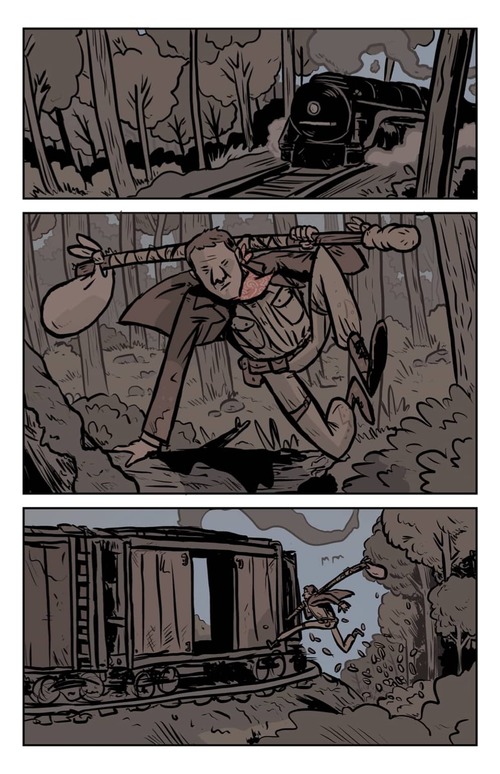 I love the 2-page text sections at the end of the issues. You’ve got a History of Big Rock Mountain by Eric Newson from the University of Central Missouri, a surprisingly positive and far-sighted 2-page Hobo Code, a short essay on the History of the Devil, and another short essay about the organization of hobos by Eric Newsom. And Rock Candy Mountain is actually a real song about a mythical hobo Shangri-la. You’ve obviously put a ton of hobo culture into your characters and the world they inhabit. Where did you research hobo culture and what were your favorite discoveries?

I’ve been reading about hobos for awhile. It’s something that really interests me. Unfortunately, there aren’t a lot of books about hobos or their history – and I’ve looked. I would bet that I’ve read a solid 75% of the books on hobo culture and it’s a very very small stack. For whatever reason it’s not a part of American history that was super well recorded. Two good books, if you’re looking for specifics, are are Roger Bruns nonfiction Knights of the Road, and Jack London light fiction anthology The Road. 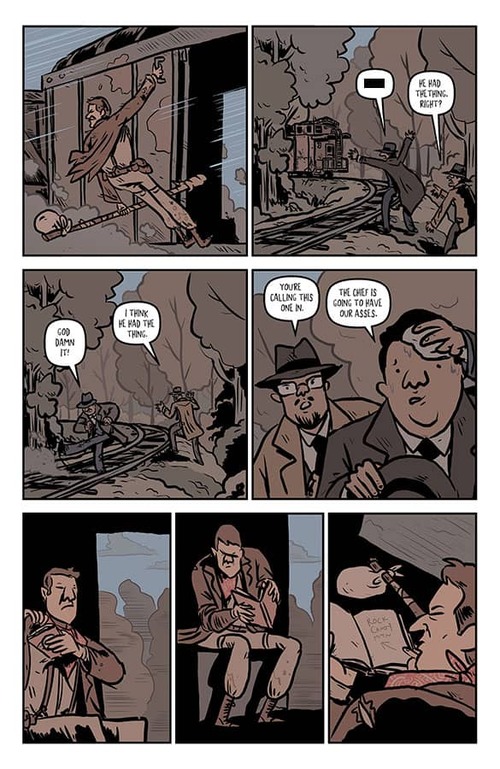 My favorite discoveries I think still all derive from early on– about how hobo culture just isn’t what the common idea of it is. Post the World Wars it was vets looking for work, it was a lot of blue collar, working people just seeing the country digging ditches, working orchards. And it was dangerous – but this was a choice. They chose to live this way.

I don’t know, man, like, it’s all so romantic to me – it’s this bucolic countryside traveling, off the grid, hustling day to day but free of the restrictions of “police society.” But it was also, like, brakemen trying to literally throw you off trains, bulls looking to kill you. It was a lifestyle that sort of succeeded or failed by your wits and I just love the big combination of all those things. 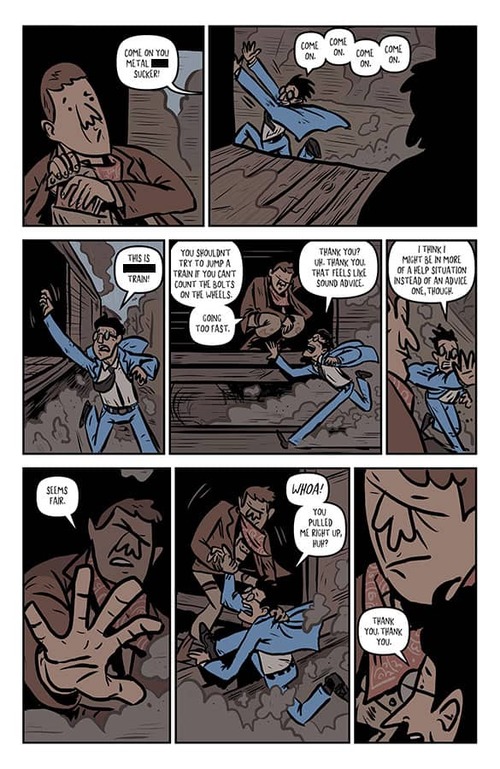 Thanks so much for the interview, Kyle. I’ll be on the look-out for more Rock Candy Mountain.

Rock Candy Mountain returns in November with issue 5, which is going to be an entire flashback of Jackson’s origin, why he’s done what he’s done, where he’s been and how we got to where we are now. I think people are really going to enjoy it.

Note: The trade paperback volume 1 of Rock Candy Mountain will be in comic shops on the 27th of September, and in book stores October 3rd. You should check it out! If you want to follow Kyle, his twitter is @thekylestarks.

Derek Künsken writes science fiction and fantasy from Gatineau, Québec. He’s building on his award-winning short fiction career with his first novel, The Quantum Magician, from Solaris Books, coming out in October, 2018. He tweets from @derekkunsken.