As the dog days begin, my mind has been prodded back to swords & sorcery by a few things. The most important one was the the return to the fray of Charles R. Saunders, creator of the heroes Imaro and Doussouye. Just the other day, he announced the start of a new blog, Different Drumming. If you are not familiar with Saunders and his superb body of work, go at once and check out his site.

The next thing, while not exactly S&S, was that I learned the final volume of R. Scott Bakker’s Aspect Emperor series, The Unholy Consult, is about to be published. For all my issues with it, it is one of the few contemporary series that has held my interest past the first book or two.

There have also been some fun discussions among various wags over on Facebook about what a list of good introductory books to the genre would look like. I suspect it won’t be long before I’m lifted entirely from my S&S doldrums and return to reading and reviewing the stuff on a regular basis. Until then, there will still be short story roundups. Like this one.

Swords and Sorcery Magazine #65 provides the publication’s usual two new stories. I like both well enough, but neither qualifies as actual S&S. The definition of “what is swords & sorcery?” has been done to death by divers hands and on numerous stages, but suffice to say there should be action and at least a touch of the dark and macabre. This issue’s two stories contain neither of those things.

“Then Will Die Your Pain,” by Tom Crowley, consists of the reflections of Konsler, an aged soldier now serving as the attendant to a knight of unclear pedigree.

Sir Garner isn’t a proper knight, just as I’m not a proper squire. There are no knights where Garner comes from, but everyone in the company calls him Sir. And of course I’m too old to be a squire. The other mercenaries say to me, “You’re gonna die out here, grandpa.” They’re probably right. I just need to finish my job first, and I’m writing this in case I don’t.

Once a soldier, Konsler, took to drink and wandering the wilds when his wife and infant son were killed by raiders. Drunk, he found himself in the Ourqghard, the lands of the Ourq tribes. Do you see that? Pronounce it out loud if it’s not clear. I’ve written before how I generally frown on stories featuring orcs by anyone other than Prof. Tolkien, but if their name’s spelled differently, can I still complain? I need to think about that.

Crowley’s story, which would have worked just as well with human barbarians in the place of he  Ourqs, and lacks the trappings and atmosphere necessary to S&S, manages to tell a fine story of a man lost in grief, finding renewed purpose for his life and fellowship with people not his own. It’s Crowley’s first published story.

Strange, frightening cries shatter the silence of Duke Tancred and Duchess Roswitha’s castle each night in Sandra Unerman’s “Every Midnight.”

The scream had first been heard three months ago. Every night, at midnight, it reached into all the rooms of Barland House. It soured the milk and cracked the eggs in the kitchen; it drove dogs to howl and cats to flee. The Duke himself had led the searches for its origin, out into the grounds for traces of some unknown terror bird, indoors from the attics to the cellars. He had sent men onto the roofs and down into the sewers. When nothing had been found, he sought help from the King’s Mage and other masters. Between them, they should have been able to trace any kind of magical attack but they discovered nothing.

The story, told by a young mage-in-training, is definitely not S&S, but it is well told, with fine atmospheric touches, and worth one’s time. While it comes to an adequately clear-cut conclusion, it could easily serve as the introduction to a greater work about what happens next.

After missing issue #10 of Grimdark Magazine a few months back, I’m 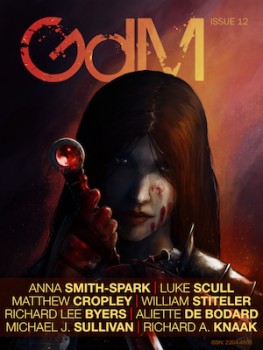 making a major effort remember to catch each new issue. The latest, #12, just out this month (sure, it’s the July issue and this is the June roundup, but it’s my roundup and I needed more than two stories to write about), is packed with stories, interviews, and reviews. Among the non-fiction are interviews with Richard A. Knaak, Richard Lee Byers, and Michael J. Sullivan, an article on plotting by Aliette de Bodard, and a review of Michael R. Fletcher’ Swarm and Steel.  . I want to point out that for a mere $3.99, editor Adrian Collins will give you 112 pages of stuff to read.

The first story, “A Ring to Rule them All” by Luke Scull, is part of his Grim Company sequence. While I know of the series, I’ve neither read it or about it. Based on this short tale of conflicting loyalties, I’m not sure what would make me pick it up. Scull writes well enough, providing enough detail to various characters before they meet their fates, but it’s far too familiar. The setting is one more rudely-civilized settlement, the men all rough-hewn warriors, their actions shaded in gray, not black or white, and a shadowy renegade named after a wild beast — in this case the Wolf. I’ve seen far too much fantasy that works and reworks similar elements to ever-diminishing returns. By itself the story is good enough, just not enough to entice me to read beyond it.

“Peddler,” by William Stiteler, is a reminder, despite any comments to the contrary, that grimdark is not swords & sorcery. It isn’t a story of action and suspense, it’s not horror either. It is, nonetheless, a haunting story of terrible loss set in a world of unremitting fear.

Other-dimensional creatures, called Rastegarizats, have learned how to invade the world by a means of magical reverse engineering. From their side of creation, they form a spell that transports them to the human side when certain, constantly updated, common phrases are uttered over here. Once among humans they kill and devour them until they can be killed. As a result, humanity lives in fear and silence, lest they summon a monster. The peddler of the title, a man called Pilgrim, and a mysterious traveling companion are making their living traveling from town to town selling bracelets they claim can thwart the Rastegarizats. I don’t particularly like the transport gimmick, but “Peddler” is good, and I’d gladly read more by its author.

The cover story of Grimdark #12 is “Red Glass” by Anna Smith-Spark, author of the recently published The Court of Broken Knives. I don’t love this story’s occasional flourishes of stream-of-consciousness prose, but I appreciate it as an almost perfect distillation of grimdark fantasy. When the Army of Amrath comes to the town of a girl name Lidae, it kills everyone, building great pyres of their corpses, just as it has done in numerous places before. First playing dead, then stealing a uniform from a dead soldier and falling in with trio of soldiers amused by her efforts, Lidae survives. The story covers her gradual transformation, driven by a single-minded effort to survive, into a true soldier of the Army of Amrath.

Almost nothing about the world, the characters, or why anything is happening is explained. All we can surmise is that the story’s setting is one of bloodshed and war without quarter. A normal girl with a normal life turns out to be ready, even to enjoy, becoming a killer, if that’s what she must do to live. Too many grimdark stories, in order to create a world with only gray shades of morality, feature characters unrecognizable as actual human beings. It may not have been Smith-Spark’s intention, but here there’s none of that. It’s as if Lidae is struggling to survive in the face of some natural disaster, and I appreciated the near purity of her tale.

So ends another roundup. I’ll leave you with my usual admonitions: go forth and read and comment.

Fletcher Vredenburgh reviews here at Black Gate most Tuesday mornings and at his own site, Stuff I Like when his muse hits him. Right now, he’s writing about nothing in particular.