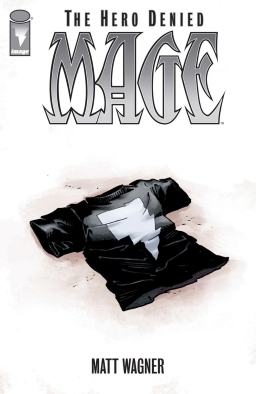 At the Emerald City Comicon in early March, Image Comics announced that starting in August they’d be publishing writer/artist Matt Wagner’s Mage: The Hero Denied, a 15-issue series with a half-length 0 issue and a double-sized conclusion. Hero Denied will be the final part of a trilogy Wagner began over thirty years ago, and I want to prepare for that last installment by looking back here at the first parts of the saga. The Mage books are two of the finest works of a great comics talent, urban fantasies mixing excellent action storytelling, a mastery of plot beats, and a sense of the mythic into gripping stories — and stories with a semi-autobiographical slant, no less.

Mage: The Hero Discovered was published by Comico from May 1984 to December 1986 (I read it in the three-volume 1987 Starblaze trade paperback collections). Wagner wrote, drew, and coloured the series, with letters by Bob Pinaha, and Sam Kieth inking from issue 6 through 15. The story follows Kevin Matchstick, inhabitant of the modern-day world, as he encounters a mysterious figure named Mirth who turns out to be a mage; Mirth introduces Matchstick to a grander and more terrifying world, one of wizardry and horrors, and leads him to the hidden truth of his nature and his link to a hero out of legend. Mage: The Hero Defined came out from Image from July 1997 through October 1999, again written and drawn by Wagner, this time with colours by Jeromy Cox and letters by Sean Konot. The series follows an older Matchstick through a stranger world of greater magics and other heroes; Matchstick meets another mage, faces consequences of his earlier actions, and discovers deeper truths about the archetypes behind him.

Always intended as a trilogy from the beginning of the story back in the 80s, the second and third chapters have necessarily been slow to follow because the story is in part an autobiography. Kevin Matchstick is the alter-ego of Matt Wagner: he’s drawn to resemble his creator, aspects of his story are fictionalisations (fantastifications?) of Wagner’s life, and other characters are analogues of people Wagner knows — and since Wagner’s a professional in comics, a number of the characters in the second series are thinly-disguised versions of other comics artists. The Hero Defined is therefore also an odd document of 1990s comics culture. If you don’t know the background, you don’t need to know it. If you do, you see another level to the story: artists become mythic heroes and villains. That works with the central concern of the tale — the transmutation of everyday life into archetypal struggle. 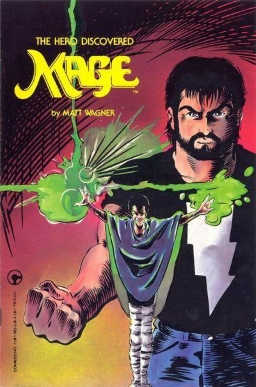 Of course, when The Hero Discovered first saw print, that was in the future. What was clear at once, though, was the craft and the scope of artistic ambition at work in the series. Wagner had broken in to comics with his character Grendel, which had appeared in Comico’s Primer anthology and then for three issues of a self-titled series; when that was cancelled, Wagner began retelling the story as a back-up in his new series, Mage. Mage for its part became one of the critical successes of the early direct market of comics specialty stores, driven both by Wagner’s panel-to-panel storytelling skill and his ability to juggle plots and mysteries. There wasn’t much like it, back then, but what Wagner created is strong enough to hold up in an age with a much wider range of comics work easily available.

Start with the storytelling. Both Hero Discovered and Hero Defined have a classic super-hero feel to them: rectangular or squarish panels, divided by clear white gutters. It’s not surprising that the later series is the more assured, in terms of the variety of camera angles, precision of rendering, subtlety of expression, and the general depiction of action, but even in the first series you can see raw talent becoming ever more realised. It strikes me that Wagner’s sense of timing, the ability to move the eye through the page at the rate he wants and in the direction he wants, is there from the very start. That in turn comes from a keen sense of composition, not just of the panel but of the page. He particularly likes setting up a rhythm of similar-sized and -shaped panels that culminate in a larger or wider shot, not just for an action scene but as a way of staging conversations. On the other hand, he seems to use fewer and fewer tight close-ups as time goes on — as perhaps fits an action book, he shows his characters emoting in their body language and stance.

Which is to say that Wagner knows how to depict character visually. Not just in their basic designs — though that’s there; Wagner wrote an introduction to the first volume of The Hero Discovered in which he said, in reference to his alter-ego’s Captain Marvel–inspired lightning-bolt T-shirt, that Matchstick “wore the gaudiness and spectacle of his childhood fantasies on his very chest. Though he still looked out at the world through those jaded eyes, he was brave enough to wear his hopes out in the open.” But also in the way his characters move through space, the way they take action, the way Wagner catches their actions at just the right moment to express what’s driving them. There’s an old adage that to show the weight of a punch in comics, you don’t show the moment of impact but the moment just before or just after. Wagner understands that, and knows how to apply that basic insight to non-punching and non-fighting moments. 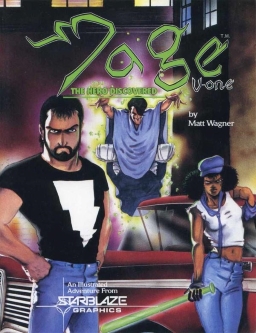 His depiction of setting, the worlds his characters move through, becomes surer as the series goes on. The Hero Discovered takes place in an American city, unnamed but hinted to be Philadelphia. The city seems deserted in early issues, Matchstick walking down empty and generic streets as he meets wizards and monsters. But Wagner’s sense of the city develops, building different neighbourhoods with different characters. And then in The Hero Defined things become very different. It’s set in a city that isn’t quite Montreal but certainly isn’t not Montreal: a largely French-speaking city north of the United States with a cross-topped mountain at its centre, but one with an “East Island” (instead of Montreal’s East End and West Island) and a “Westmount Cemetary” near the cross (where Montreal has Notre-Dame-des-Neiges Cemetery and Mount Royal Cemetery, as well as a separate municipality within the city borders named Westmount that has no cemetery). It’s a clever way to make the setting both specific and archetypal. The city becomes a gathering-place of heroes and monsters, real and yet unreal. Montreal’s Place Bonaventure exhibition hall here becomes, appropriately, the “Place du Bonaventure.”

Wagner changed his art style and to some extent his narrative approach with the second series — or, if not his approach, at least the emotional tone of the early chapters. On first publication it was more of a change than many fans found themselves immediately able to accept. In retrospect, it seems obvious: Wagner was describing himself at a different time in his life. Or, more within the fiction of the story: Kevin Matchstick had grown and aged and matured. He wasn’t going to be the same character as in the first series, and the second series wasn’t going to have the same feel. (One may, therefore, expect further difference in the third.)

The art in Hero Defined is more perhaps more cartoony, overall, sketchier, with heavier blacks, but also more complex, with more varied designs. Wagner’s still got a keen sense of how to move his characters through the settings, but there’s a wider range to the locations. And to the emotional tones of the scenes and of the characters. While the first issues of Hero Discovered have an almost eerie quietness as Kevin Matchstick wanders through a world that he finds bigger than he expected, soul-searching along the way and working out his approach to life, the second begins with him confident and working easily with others. There’s more humour, and more scenes of guys-being-guys as Kevin spends time with new characters like Joe Phat (an incarnation of the Indiginous American trickster myth-figure Coyote, here in the form of an African-American version of autobio cartoonist Joe Matt) and Kirby Hero (an incarnation of Hercules, and a take on Wagner’s occasional collaborator Bernie Mireault). That more relaxed approach to monster-hunting was a marked departure from the awe and wonder of the first series, but it’s perfectly logical for a man who’d spent years fighting monsters and learning the ropes of the magical world. Wagner’s success with the series lies, at least in part, in the way that he’s able to bring out the awe and wonder again by the time the story’s done. 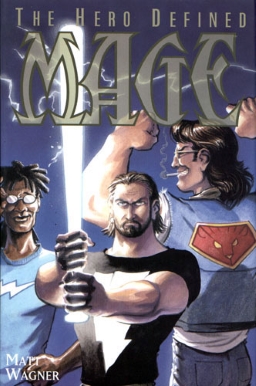 But then, part of the reason why he’s able to do that is because he doesn’t take things easy on Kevin Matchstick. Matchstck may be a version of Wagner, but he’s far from a flawless figure, and indeed often he’s not even particularly admirable; early on in the first series Wagner has Matchstick describe an incident in his childhood that casts him in an extremely negative light. As the story goes on, we see that Matchstick’s a man with immense power who spends much of his time in The Hero Discovered trying to find excuses not to use it, and trying to deny the reality of the world around him. Then in the second series it becomes clear that he’s assumed a leadership role essentially through force of personality — he’s a white guy with a big mouth who instinctively dominates people around him. That doesn’t work when he runs into other heroes, who aren’t interested in being dominated or working under a self-appointed leader. And you can see why: when things get tough, Matchstick’s plans tend to not work out. He’s an ineffectual leader; if not a roi fainéant, at least one who doesn’t always bother to learn what he’s dealing with or think of fallback positions. The whole reason the heroes have to run around chasing down monsters, after all, is a function of events at the end of the first book for which Matchstick must bear responsibility.

That willingness to show Matchstick’s flaws, and even to build stories around them, is what makes the series work. I have no idea how much those flaws are things Wagner sees in himself, or things others see in him. But there is a sense that the story is almost a confessional, an examination of the way by which a callow youth comes to maturity and the way an older man who thinks himself mature must come to face his limitations. How the myths we live by may shape us, but sometimes are insufficient; how we may be living out more or different stories than we imagine.

Wagner’s sense of structure is acute — the two series, for all their differences of tone, follow the same overall structure, down to having a fold-out page in a double-size final issue. But the sense of pattern that’s characteristic of a myth is balanced here by the unpredictability of the real. By life irrupting into fate. That’s not a function of the depiction of everyday life, which is largely nonexistent — Matchstick mentions having a job early in the first series, but events soon lead him away from that. Money’s free, thanks to magic. But human emotional dynamics are instantly recognisable. People get angry and laugh with each other and laugh at each other and work together and get into fights for no real reason and sometimes hurt each other without meaning to; and these things aren’t foreshadowed, necessarily, they don’t feel like vastly significant turning-points (though sometimes in retrospect they are), they’re just small and funny and sad. And important. It’s the working of those dynamics, that real life, into the myth-patterns that, to me, is characteristic of Mage. I’m looking forward to reading more of it later this year.