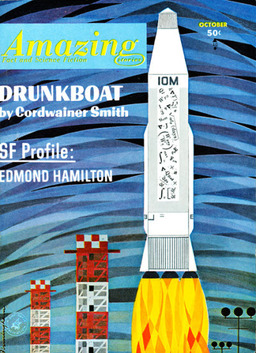 Back to Cele Goldsmith’s era at Amazing. This issue has a couple of middling stories by two of the strangest and most original of SF writers. The cover is by Lloyd Birmingham, illustrating Cordwainer Smith’s “Drunkboat.” Interiors are by Birmingham, George Schelling, and Frank R. Paul (who had just died). Indeed, Norman Lobsenz’ editorial opens by mentioning Paul’s death (Paul, of course, famously painted the cover for the very first issue of Amazing); and goes on somewhat randomly to mention a National Spelling Bee winner who credited reading SF for his vocabulary (though reading Amazing could hardly have helped his spelling, given the standard of proofreading displayed this issue!); and then mentions Groff Conklin’s latest anthology, Great Science Fiction About Doctors (which in fact made a point of including a number of stories BY doctors, though none by the Good Doctor*).

(*Of course, Isaac Asimov was not a medical doctor, though he was a professor at a medical school.)

“Or So You Say …,” the letter column, features letters by Kathryn Avila (complaining about the low quality of the July issue), Norman M. Davis (praising Robert Young’s “Redemption,” one of the stories Avila had complained about), and Paul Scaramazza, theorizing that the then low (he says) status of fantasy literature is the fault of readers without imagination.

In The Spectroscope, S. E. Cotts reviews a now quite obscure book, The Fools of Time, by William E. Barrett, and an anthology from Sam Moskowitz, The Coming of the Robots. (She [as I now assume Cotts was] didn’t like the first, did like the second.) Moskowitz himself contributes a Profile of Edmond Hamilton. 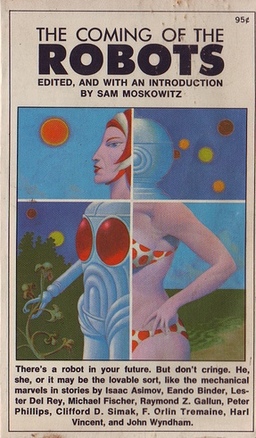 “Drunkboat” is one of several Cordwainer Smith stories that appeared in Cele Goldsmith’s magazines. She was, it seems, his major backup editor after Frederik Pohl, who published the bulk of his work in Galaxy and If (with a story in Star Science Fiction and one in Worlds of Tomorrow).

It’s a story of obsessive love, and how a man’s love for a woman helps him break a path through Space Three. In a sense this could seem like a Robert F. Young plot. The difference, really, is in Smith’s often incantatory prose; and also in his less realistic but more (somehow) believable plots. And Smith’s obsessives somehow convince the reader of their obsessions. All that said, I think “Drunkboat” is far from Cordwainer Smith at his best (though it was well received, and was picked by Judith Merril for her best of the year book.)

It’s told at kind of an angle. We don’t really see much of Artyr Rambo, or his beloved Elizabeth. We seem him discovered in a field near the hospital where Elizabeth is dying. And we see his superhuman efforts to reach her. And we hear from the high officials and doctors involved, especially Lord Crudelta, who set up this situation as an experiment, to see if someone could find a way through Space Three; and who is tried for his crime. Lord Vomact (a character in other Instrumentality stories) is also involved. All this gives a certain distance to the depiction – which is I think entirely Smith’s intention. It’s interesting, and the ending is odd and effective enough. But it doesn’t stand with the very greatest of Smith’s stories. (As Neil H. notes, the title of the story and the name of the protagonist are direct references to “La Bateau Ivre” by Arthur Rimbaud.)

The other novelet is this month’s Classic Reprint. “The Prince of Liars” was first printed in Amazing for October 1930. The author was Lucile Taylor Hansen (1897-1976). Hansen (an anthropologist) published a number of science fiction stories (of a somewhat “hard” variety for the time) and also a series of non-fiction articles called “Scientific Mysteries” that appeared in Amazing in the ‘40s. Hansen allowed it to be thought that she was a man (a drawing of a man was included in one early author profile). Supposedly she once told Forrest Ackerman that her brother actually wrote the stories (she did not have a brother). Sam Moskowitz repeats this assertion in his introduction to this story (though he allows that she might actually have been the writer), and also gets Hansen’s first name wrong (he gives it as Louise). Hansen later published a somewhat crackpottish-looking book called He Walked the Americas, which asserts that Jesus came to the Americas, and that he was the White Prophet mentioned in some Native American legends.

As for the story, it has aspects of interest but for me doesn’t quite work. The narrator meets a certain Dr. Smead, and argues with him about Einstein – the narrator is a confirmed “Newtonian.” But Smead has a tale that will change his mind – and does. He tells of a man he knows (obviously Smead himself) who had been a galley slave back in ancient times. He escaped eventually, and fled to a local temple, where he managed to meet and fall for a priestess of the local Goddess, who eventually tells him a strange story of her history, involving a journey to “The Blue World” by spaceship. And of course in the end “Smead” ends up traveling to the same world, and seeing alien wonders, before returning, far in his future due to time dilation.

The short stories, all by somewhat well-known writers, are all lesser work in these writers’ oeuvres. Larry Eisenberg’s “The Fastest Draw” concerns a rich man and one of his employees, a genius engineer, whom he hires to create a robot that will re-enact Western duels with lasers (or something similar) used to score who killed the other. Inevitably, things progress to a duel with live bullets. Eisenberg tries for a character story, and just doesn’t convince.

Philip K. Dick’s “Stand-By” is a satirical piece in which the job of President is a union job. The kicker is that the President is only the standby for the real authority, a computer. Max Fischer is the brand new standby – but suddenly an emergency occurs, and the computer is down. The emergency involves an alien invasion. Max takes over, and suddenly faces a challenge from a popular newscaster, who insists on a democratic election. All the while Max is trying to prosecute the war with the aliens. This isn’t bad stuff – there’s some real satirical bite. But some of all that is pretty obvious. And the action is a bit strained, convoluted. In a way there’s too much going on.

And as for Zelazny’s “The Misfits,” it’s very weak, perhaps the worst Roger Zelazny story I have read. The main character is living in a virtual world, and he rejects it. All the scenarios presented – which involve him as a hero in exciting adventures. He wants to return to boring real life. The kicker, of course, is that he ends up in a boring real life job – which is also a virtual existence.

Rich Horton’s last Retro Review for us was the February 1962 issue of Fantastic Stories of Imagination. His website is Strange at Ecbatan

It’s always a pleasure to see another of these retro-reviews of old Ziff-Davis magazines.

Back in the day when sf was still something of a literary ghetto, the magazines were a major source of interest for the fan culture, along with paperback reprints and originals. Authors such as PKD may have had to sell to the magazines although this wasn’t lucrative, but if they were fortunate, they might be able to write several stories within a matter of weeks.

I read “Drunkboat” many years ago and no longer have a copy, so my memory is hazy. As I recall, the protagonist’s name was Artyr Rambo, not Artyr Brown but may be I am misremembering. Rambo does not refer to Stallone but to Arthur Rimbaud, French 19th century poet who wrote “Le Bateau Ivre” sometimes translated as “The Drunken Boat”. I have read the poem in translation – my French is nowhere near good enough – but, again, do not recall much about it or its connection to Smith’s story. However, it always struck me that when, as a teenager, I was being teased and mocked for reading such a worthless genre as science fiction that this worthless genre was being written by people working professionally in academic and scientific fields and that their reading tastes could include 19th century French poetry. An area of literature often lost on my contemporaries!

Thanks, Neil. Artyr Rambo is definitely the name of the protagonist in the version of “Drunkboat” in THE REDISCOVERY OF MAN. I may have just screwed up, but I am now wondering if the name was different in the magazine text, and to my extreme frustration, I can’t just now place my hands on my copy (WHICH I JUST HAD!) …

Probably my mistake though. I’ll report when I do find the magazine.

Found it. My mistake. The name is Artyr Rambo, which of course makes sense for the reasons you mention. Thanks! I’m fixing it.